Despite losing to Wales in front of a record 6,113-strong crowd in their TikTok Women’s Six Nations opener, Ireland’s new head coach Greg McWilliams was able to glean some positives from the game.

First half tries from Amee-Leigh Murphy Crowe and Linda Djougang had McWilliams’ new-look team on course at half-time, leading 14-5 in sunny conditions at the RDS.

Stacey Flood also touched down, but the Welsh forwards – backed up by a strong bench – began to dictate play, their maul being a key weapon as second half tries from Jasmine Joyce, Donna Rose (2) and Hannah Jones guided them to a 27-19 win.

Although it was not the result he wanted, there were elements of the Irish performance that McWilliams believes can be built upon in the weeks to come.

“Credit to Wales, I thought they got on top of us physically in the second half. We struggled to exit. The yellow card (for Eimear Considine) in the last 10 minutes was tough,” he admitted afterwards.

“I thought they showed excellent signs, when you think we only had 31% of possession. The signs were good. There’s certainly things there we can be proud of.

“I think our defensive shape was good. I think our energy to get back in the game and defend. We defended for such long periods of time. It does take it out of a team.” 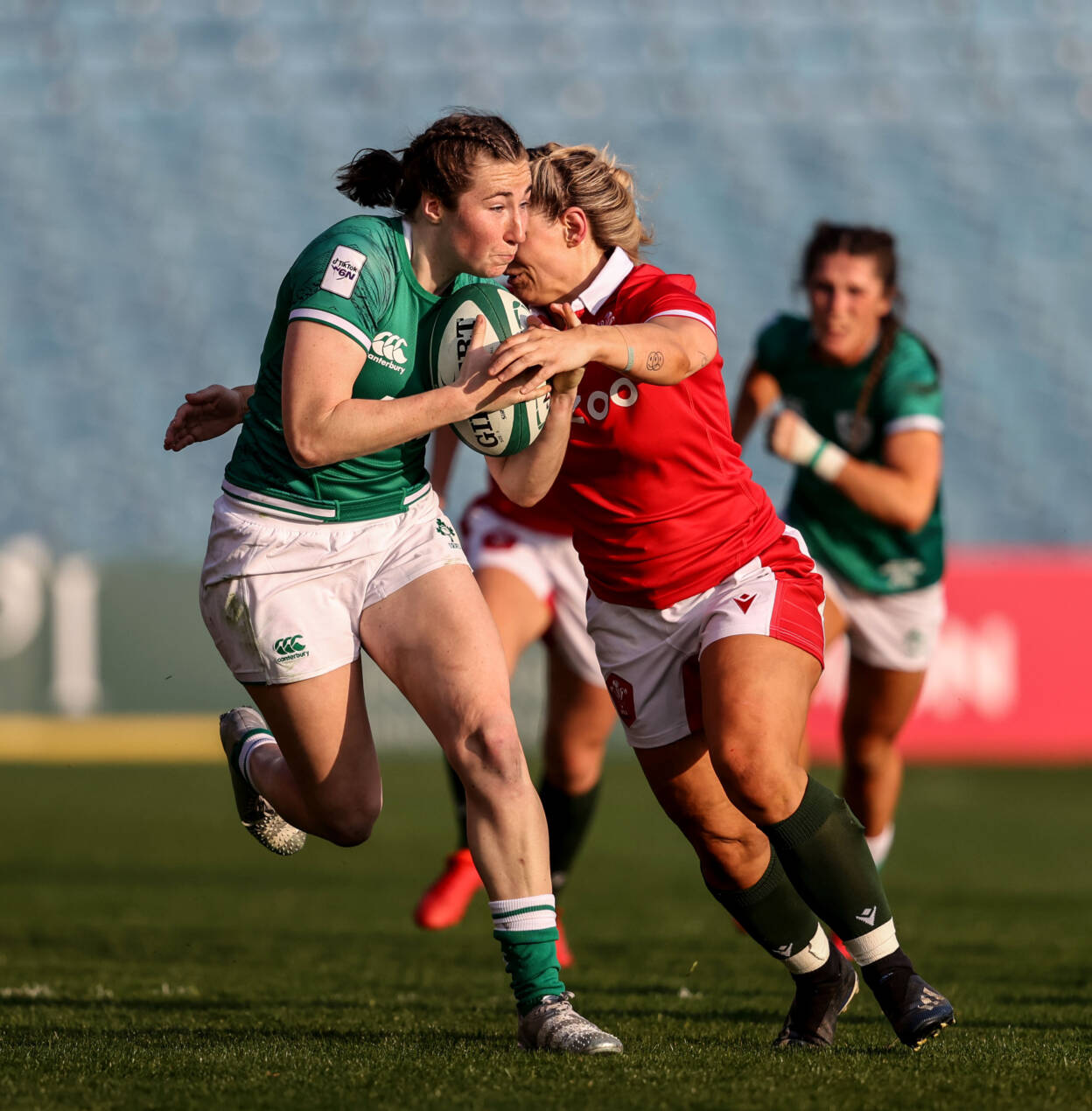 McWilliams added: “I felt their bench came on and added real strength and an impact, and we couldn’t cope with it. Again, like everything else now, as a coaching group and as a player group, we’ve got to own that performance as well.

“So impressed and proud of everything, from the crowd to the day that we had. It was fantastic, but we all need to be collectively better. I think we need to be smart about how we’re going to do that this week in preparation for France.”

There were some impressive individual performances, with Neve Jones topping the tackle stats with 23, Sam Monaghan winning some key lineouts and showing her offloading ability, and Flood flourishing at inside centre.

Ireland are back in action against France at Stade Ernest Wallon in Toulouse next Saturday, and McWilliams pinpointed a number of areas they will need to work on if they are to upset the 2018 champions.

“First, you break down the footage that we have. You make sure to come up with a plan, it’s pretty obvious that there’s ways of counteracting a maul. Whether that’s how you set up from the lineout or whether it’s the actions as soon as the jumper hits the deck.

There’s certainly areas that we’ll work on around our maul defence. We have to. That was an area that was exposed. The scrum as well, but we’ll continue to work on our scrum.

“I think there’s been some really good sessions being done by Rob (Sweeney, our scrum coach). I think the scrum is going in the right direction. You just want to get hold of the ball a bit more and hold on to it for longer periods.

“Because we’re trying to play at a fast pace, they slowed it down a little bit and we need to just be a bit more assertive in holding onto the ball. Playing the way that we want to play in attack, but really proud about what we did defensively.”

Given they suffered a 45-0 defeat to Ireland in last year’s Six Nations, yesterday’s game represented a massive leap forward for the Welsh. From McWilliams’ perspective, this highlights what is possible in women’s international rugby in even a short space of time.

“That is the one thing in the women’s game, I think you can close a gap quite quickly. I think in the men’s game, it’s very hard to close that gap,” he added.

“He should be a really proud coach, I thought he did a good number on me, particularly in how he used his bench. Fair play to Wales.”