Lansdowne guaranteed their presence in the Energia All-Ireland League Division 1A semi-finals with a 52-21 victory over UCC this afternoon.

Mark McHugh’s men had the bonus point tucked away by half-time with lively full-back Eamonn Mills bagging a brace, but the concession of three maul tries was a concern.

UCC, who are destined for the relegation play-off, hit the front when hooker Tadgh McCarthy piled over from a well-executed lineout drive. Daniel Squires converted.

However, Dan Murphy pounced from close range for an 11th-minute leveller, with Clive Ross having been tackled short just a couple of phases earlier. Stephen Madigan’s kick made it seven points apiece.

Lansdowne’s backs were in lethal form on the Aviva Stadium’s sun-kissed back pitch. The hosts took the lead when Paul Kiernan and Michael Silvester combined to send Mills over out wide on the right.

UCC won a relieving scrum penalty amid a bout of set-piece pressure from Lansdowne’s pack, but Silvester was soon set free to score in the right corner with 28 minutes on the clock.

Following a Ross lineout steal, UCC were outflanked again as Kiernan took possession up, offloading for Mills to step off his left and accelerate away up the right touchline to complete his brace. 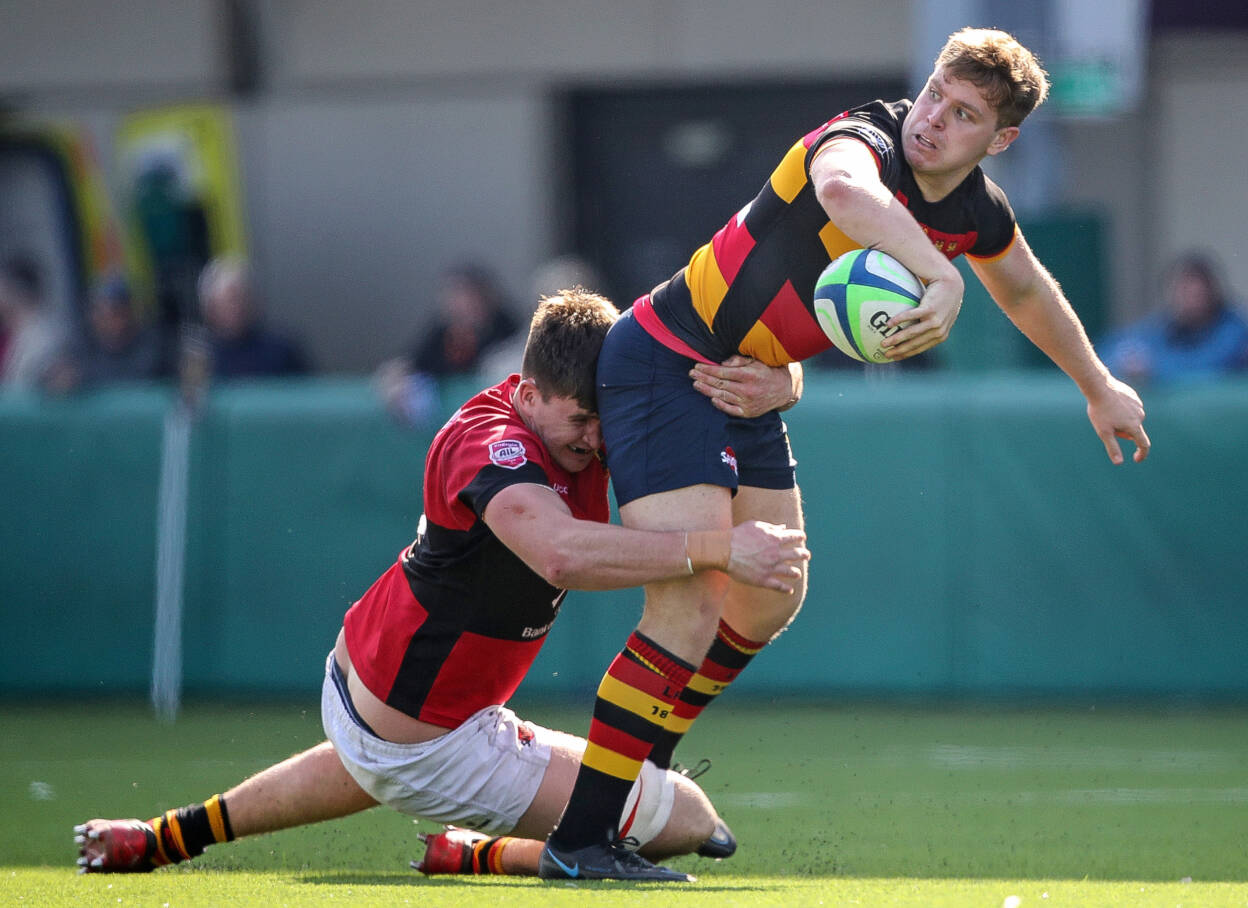 Out-half Madigan converted the bonus point try and also tagged on the extras to replacement James Reynolds’ late effort. Once more it was centre Kiernan who broke the line in midfield, feeding the ball wide for Reynolds to make it 31-7.

Early in the second half, one too many infringements landed Lansdowne lock Ruairi Clarke in the sin bin, and UCC’s Jack Kelleher joined him soon after as the hosts lifted the tempo again.

A short lineout move almost put Lansdowne replacement Jamie Kavanagh over for a try, before loosehead Frank Kavanagh barged over from a few metres out to put 31 points between the sides. 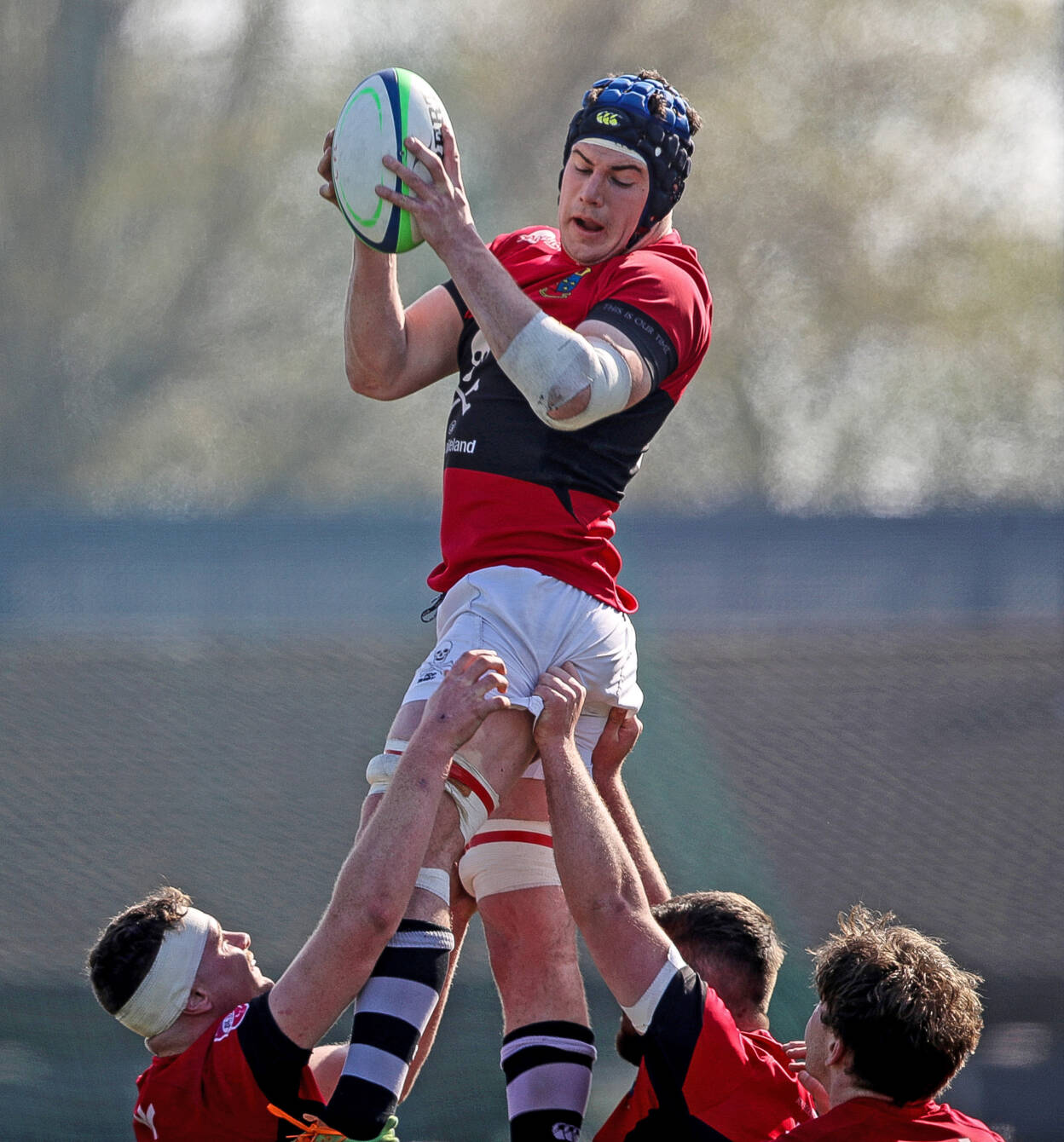 UCC replied with a second maul score, replacement Billy Kingston crossing after Cian Whooley’s chip kick had been gobbled up by Billy Kiernan, a cousin of Lansdowne’s influential centre.

The scores kept coming, Lansdowne finishing with eight tries in all. Jack Matthews was denied by a forward pass before Corey Reid ran in an intercept try just as UCC looked to break out of their own 22.

Reid slipped a lovely offload away for replacement Andy Marks to go in behind the posts, allowing Madigan to take his kicking haul to 12 points.

The Cork students, who had seven Under-20 players in their starting XV, had the final say when hooker Kingston scrambled over from a last-minute maul. George Coomber added his second conversion. 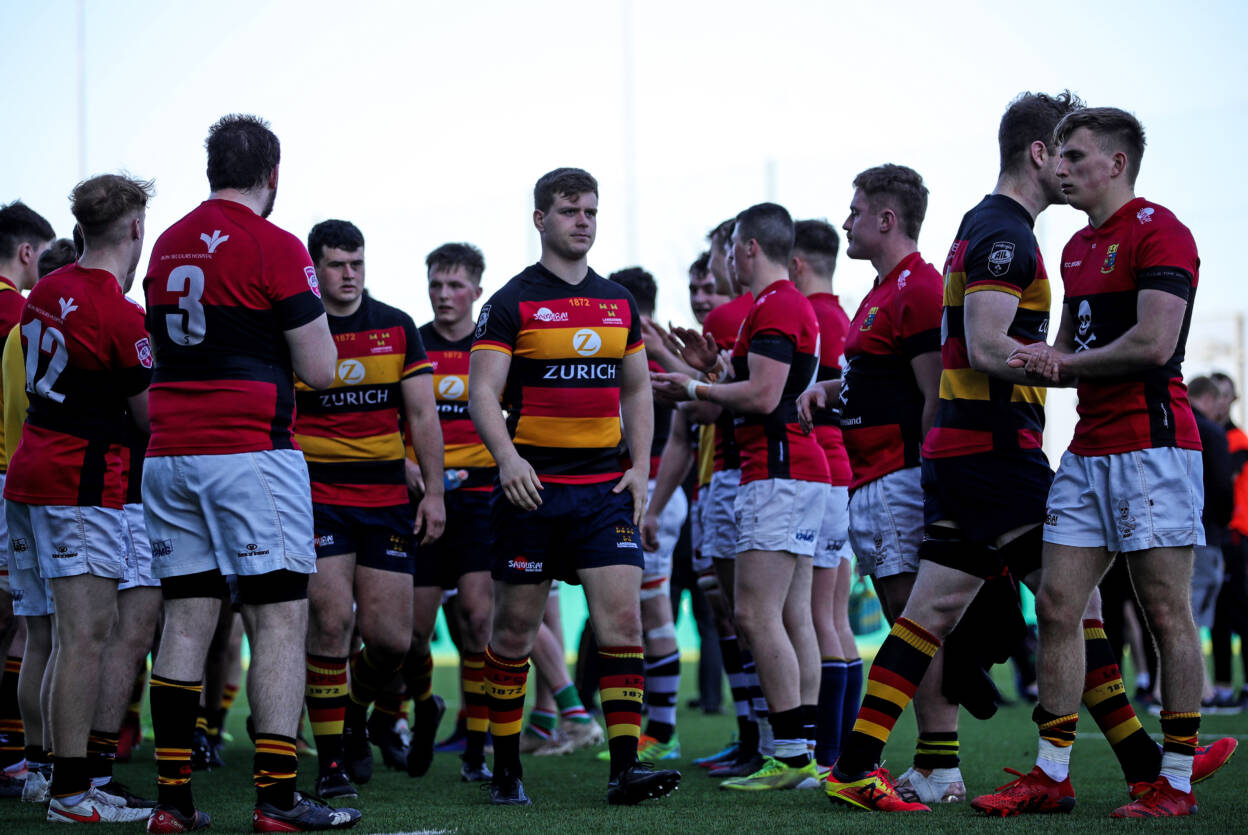 ‘Tarf showed their title credentials again, a dominant set piece and a three-try first half salvo setting them up to beat the defending champions who are still hanging on to the last play-off spot.

This was a hugely physical encounter, particularly at the breakdown, and Con, facing into a strong wind, fell behind following Conor Kelly’s 10th-minute penalty.

The north Dubliners went to the corner from a penalty on the half hour mark, Ed Brennan going close off the maul before fellow back rower Alex Soroka grounded the ball for a seven-pointer.

Con returned fire with an intercept effort from Munster’s Alex McHenry, past the hour mark, and flanker John Forde touched down in the 78th minute. However, their late rally failed to produce a bonus point. 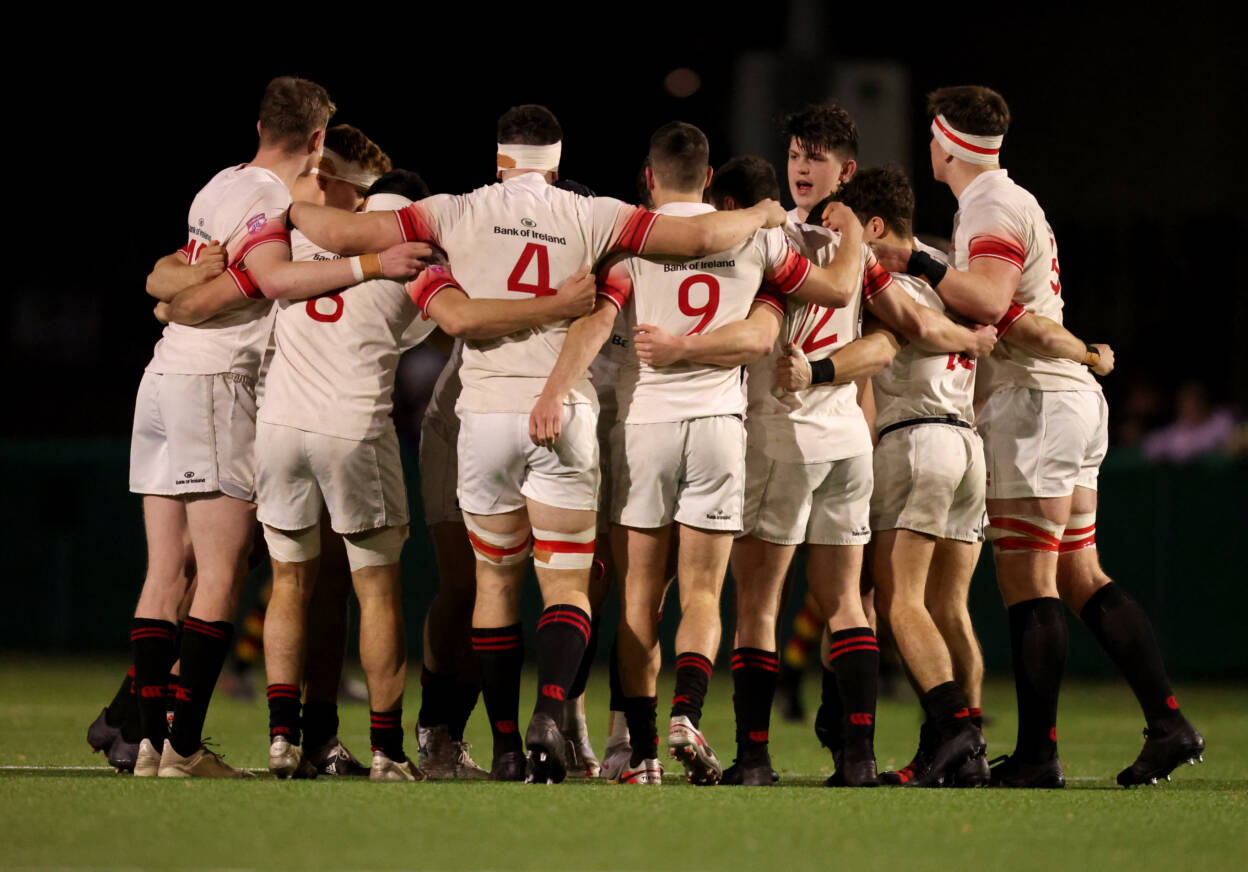 With two rounds remaining, Con have Young Munster and Dublin University breathing down their necks, just two and three points behind them respectively.

Trinity are right back in the play-off picture after picking up their second successive victory, winning 30-19 at Ballynahinch who are preparing for the relegation play-off.

Flanker Alan Francis impressed with a brace of tries, one of them following a defence-splitting break from Louis O’Reilly. The students’ maul was a major weapon on the day.

Terenure College kept up their challenge in third place – just two points behind Lansdowne – thanks to a well-judged 18-12 defeat of Young Munster.

Defences were on top during a sun-splashed first half at Lakelands Park, but Jake Swaine slotted over two penalties to add to Terenure’s early opening try from powerful centre Colm de Buitléar for an 11-3 lead.

Strong maul defence from the Cookies, coupled with two Evan Cusack penalty goals, made it a two-point game, only for ‘Nure scrum half Alan Bennie to snipe over for a decisive 67th-minute try. 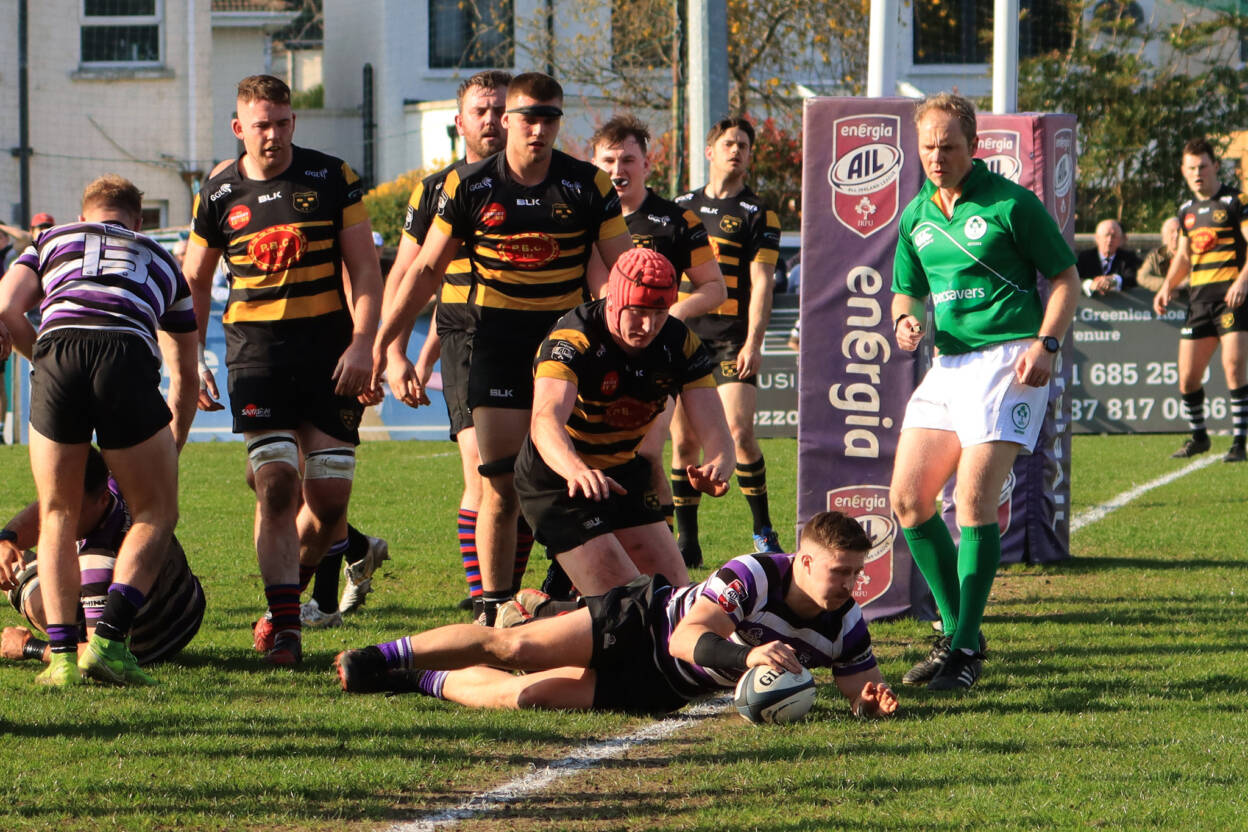 UCD climbed above Garryowen into seventh spot courtesy of a 33-27 defeat of the Light Blues at the UCD Bowl. The students recovered from Jonathan Fish’s early sin-binning to lead 21-10 at the break.

Centre David Ryan’s sixth try in seven games arrived just before half-time, but Garryowen hit back well on the restart with Munster’s Liam Coombes running in an intercept try and Tommy O’Hora also touching down.

With UCD captain Bobby Sheehan in the sin bin, Garryowen’s Evan Maher crossed to make it 27-21. However, the hosts’ brilliant late surge saw Jack Gardiner and Dylan O’Grady both dot down to deny the Limerick men.