Ireland Under-20 head coach Richie Murphy says they will not alter their approach this week despite the big carrot of an U-20 Six Nations Grand Slam dangling in front of them.

He sees no need to change a successful formula which has served them so well so far, as four wins-out-of-four has them aiming for an enviable clean sweep against Scotland at Musgrave Park on Sunday (kick-off 5pm).

Tickets for the Ireland U-20s’ mouth-watering final round clash with Scotland at their Cork fortress are available to buy here from Ticketmaster.

The Ireland young guns will focus on getting their performance right, hoping that the result takes care of itself as they look to follow up on their impressive 42-27 bonus point victory over England.

Speaking in the aftermath of that game, Murphy said: “Grand Slams are results and we’ve been very much focusing on making sure our bits and pieces are right. I don’t think the lads are going to go away from that this week.

“This coming week we know what is there for us. Our job is to prepare the best we can for Scotland. Make sure we touch all the bases that we’ve been touching.

“There’s a lot to review from the England game. There’s a lot of things that we can definitely do a little bit better. We’re looking forward to that.”

Murphy’s charges, who have been led superbly by captain Reuben Crothers from the Ulster Academy, will not want a repeat of their start against England which saw them go 10 points down in as many minutes.

With the wind at their backs, they turned things around in the second half, racking up five tries in all with out-half Charlie Tector kicking 17 points in a player-of-the-match performance. 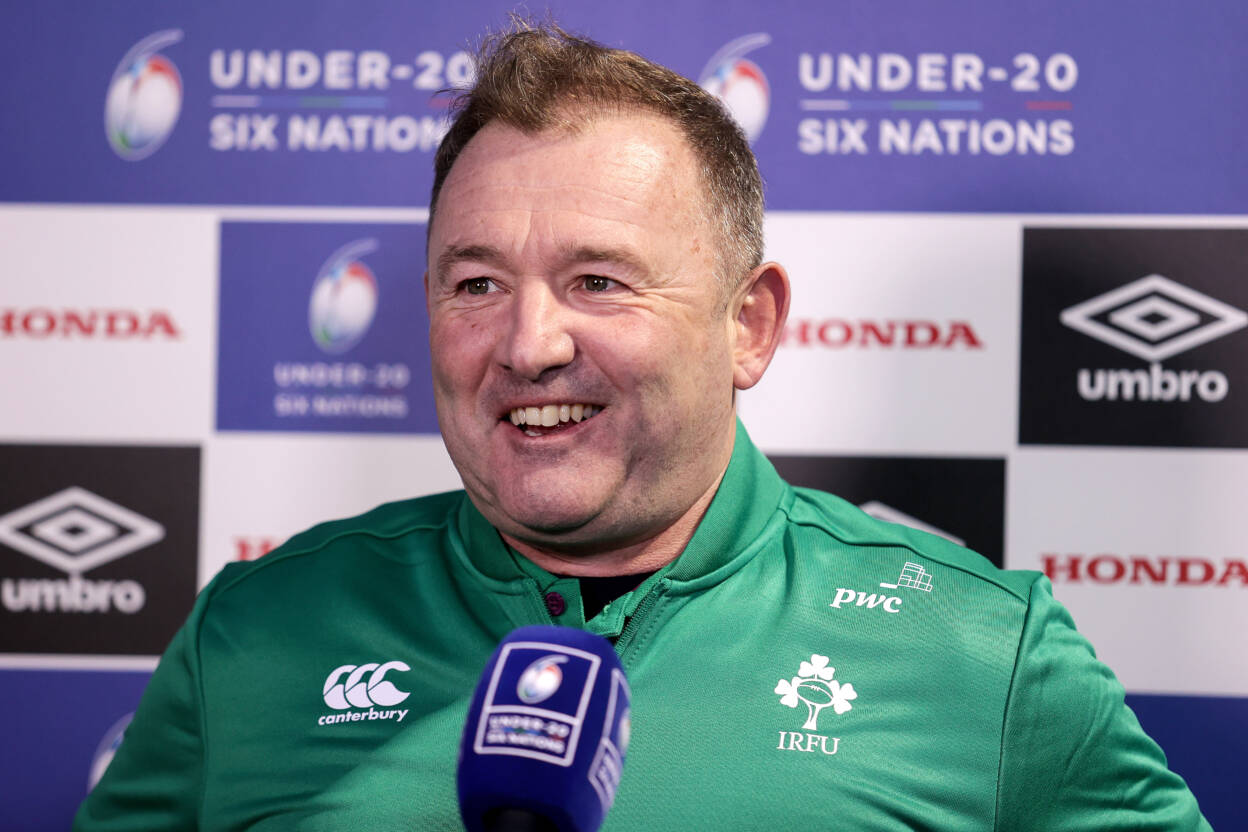 “Going 10 points down at the start was a little bit disappointing, but I thought the lads battled back in. Stuck to the process really well and found a foothold in the game,” noted Murphy.

“You’d be surprised at how windy it is there. One kick from one end of the pitch goes down all the way. You could even see with Charlie’s kick going dead.

“It’s a massive advantage and it’s very hard to exit from the end we’re at, at the moment. We were happy to trap England down there in the second half and luckily enough we got what we worked for.”

This is the Wicklow man’s second season at the helm of the Ireland Under-20s. He had a short run-up to the 2021 U-20 Six Nations tournament, which was held in full in Cardiff due to Covid-19.

The likes of Crothers, Jack Boyle, Mark Morrissey, Ben Carson, Chay Mullins and Jude Postlethwaite gained experience at this level last season, and have knitted together nicely with the 2022 intake, which includes Munster starlet Patrick Campbell.

Murphy has been delighted with the players’ appetite for work and their execution on the pitch in recent weeks, as they moved to the top of the table, continuing on an upward curve to keep ahead of France, their chief challengers.

One big final challenge awaits in Cork, a huge battle both physically and mentally for which Murphy and fellow coaches Jimmy Duffy, Willie Faloon and Mark Sexton will undoubtedly have the squad well prepared for.

It’s unbelievable, in a short space of time, how far they’ve come. They’ve worked really hard together. There’s a real tightness, a real brotherhood within the group.

“There’s 23 guys obviously here tonight, 26 in total (travelled for the England game), but it’s a 34, 35-man panel and everyone has played their part.”

One player who certainly grasped his opportunity in Barnet was Aitzol King, who came off the bench to supply two top class try finishes. He used all of his 6ft 3in frame to score one-handed with a determined dive in the right corner. 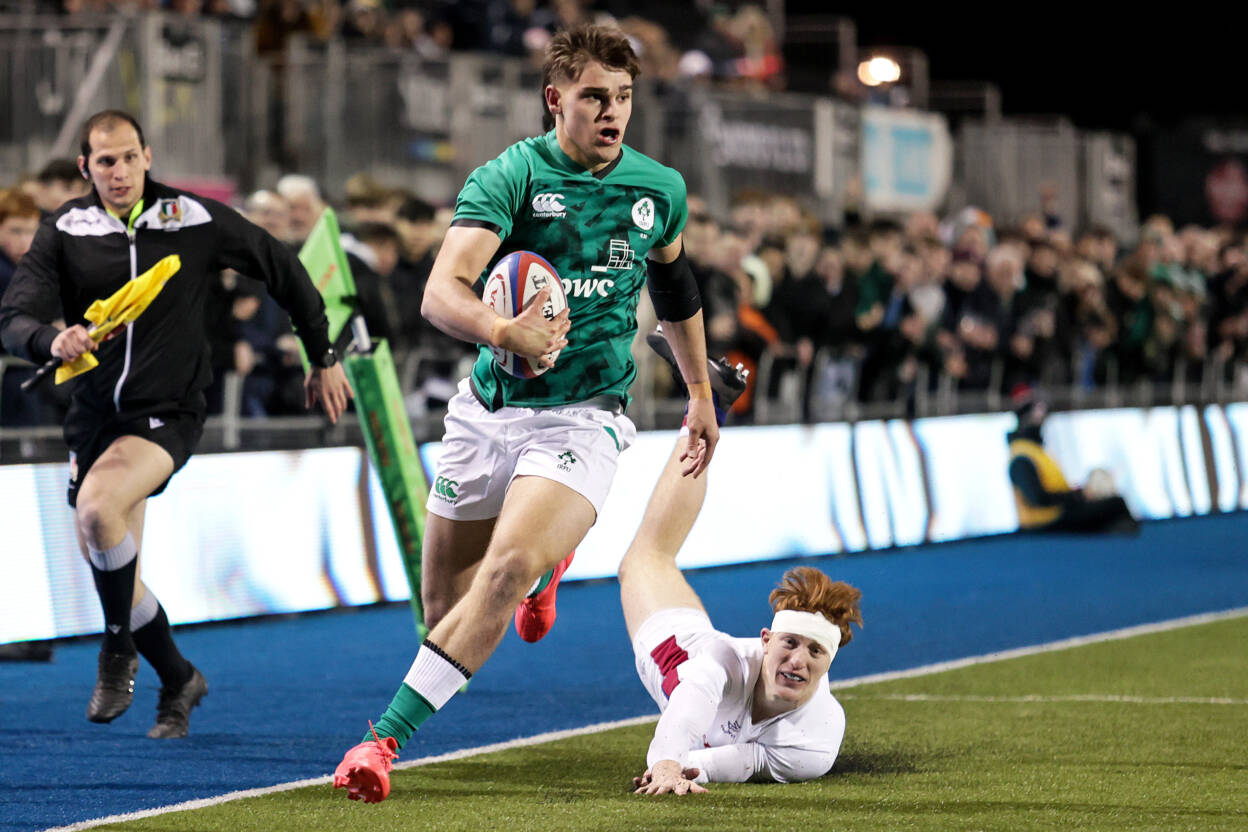 Asked about the quality of the 19-year-old winger’s acrobatic effort, Murphy replied: “An incredible finish. In fairness, we’ve been asking Aitzol to do that for a while so we were quite happy it was tonight!

“I think they’re pretty proud of him in Balbriggan. He’s come a long way, he’s come through the club scene in Ireland, where the school scene would probably be more popular, but he’s found his way.

“There is another guy who had a massive learning curve over this season but especially the last two months. He’s come a real long way.

“We’re delighted for him to get the two scores, but it’s a team effort and that little inside ball from Ethan (Coughlan) to put him through was a beauty as well.”