Proving unstoppable again from a few metres out, hooker Donnellan crashed over twice during the first half of ‘Tarf’s 12-11 victory at Castle Avenue.

There were emotional scenes before kick-off as the Ukraine flag flew above the Clontarf clubhouse, with Kiev-born prop Ivan Soroka and his younger brother, Leinster Academy forward Alex, both starting for the table toppers.

Clontarf pledged all the gate money and donations from bucket collections to the Irish Red Cross Ukraine Crisis Appeal. The home pack got on top at crucial stages, using their lineout maul as a key launchpad.

Donnellan scored from a pick-and-go and then a well-executed lineout drive, taking his incredible tally to 15 tries for the current campaign.

Third-placed Terenure bit back with two Jake Swaine penalties, and despite conceding a late Craig Adams try in the corner, Clontarf hung on with some dogged defence.

Liam McMahon skittled Con defenders on a powerful early run, and with a subsequent penalty dispatched to the corner, a well-executed maul set up flanker Anthony Ryan for the opening try.

Trinity captain Mick O’Kennedy converted before adding a penalty for an 8-0 scoreline, following a cynical foul by Con number 8 Luke Cahill who was sent to the sin bin.

In Cahill’s absence, his opposite number Diarmuid McCormack plunged over from the back of a dominant five-metre scrum. O’Kennedy made it 15-0.

O’Reilly was caught with a high tackle soon after, as Con lost prop Luke McAuliffe to the bin, but a late Moynihan penalty reduced the arrears to 15-8.

Leinster Academy hooker Lee Barron opened the second half’s scoring, but Trinity’s third try was cancelled out by scores from Con replacement Gerry Hurley, via a maul, and McHenry again – at the end of a free-flowing attack.

However, Tony Smeeth’s young guns showed impressive composure during the closing stages, with centre Faria crucially racing clear to steady the ship at 29-20 before Kennedy slotted over a clinching three-pointer.

There was still time for Con replacement Eoin Quilter to make it four tries each. The Leesiders’ seventh try-scoring bonus point of the season keeps them just four points behind second-placed Lansdowne.

Young Munster are hot on Con’s heels with just three points to make up following a brilliant 39-24 bonus point success against Lansdowne.

The Cookies ran in five tries in an all-action display at Greenfields that eased some of the hurt from their recent Bateman Cup final defeat to the same opposition.

Jason Kiely got Munsters off to a flying start with a try after he stripped the ball in a tackle, chipped over the Lansdowne defence and collected to touch down for an excellent individual score that Evan Cusack converted.

Young scrum half Donnacha O’Callaghan crossed twice, popping up on the shoulder of Conor Moloney for his first and then scoring again on the hour mark after excellent work from full-back Cian Casey.

Despite losing lock Joey Szpara to a red card, Lansdowne battled valiantly for a bonus point of their own, but a late Cusack penalty saw the home side prevail.

The best of Lansdowne’s tries came during the first half when Corey Reid’s well-timed pass created an overlap, allowing James Reynolds to send Eamonn Mills over in the corner to close the gap to 17-12 at the break.

Meanwhile, UCD secured their Division 1A status for another year with a 33-12 triumph over UCC in the Colours match at the Mardyke.

James Ryan’s younger brother, David, popped up with his fifth try in six games for Kevin Croke’s side. Centre Daniel Squires briefly brought UCC level on the half hour mark, but the well-drilled visitors pushed clear in the second half.

The Cork outfit were only 14-7 behind at the break, with Squires finishing off good initial work from prop Rory Duggan and adding the conversion himself.

UCD had cut through for a 25th-minute opener, scored by hooker Bobby Sheehan, and a nice move off a scrum saw Ross Deegan come in off his wing to touch down. The Leinster Academy’s Chris Cosgrave converted both tries.

Tarrant and UCC full-back Louis Bruce then swapped tries, the latter profiting from some fine build-up play to finish well in the right corner.

UCD were the better team on the day and rounded off a five tries-to-two victory when Ryan powered through, yet the lasting memory of the day came before kick-off when captains Jack Kelleher and Jack Ringrose held the Ukrainian flag together during a minute’s silence. 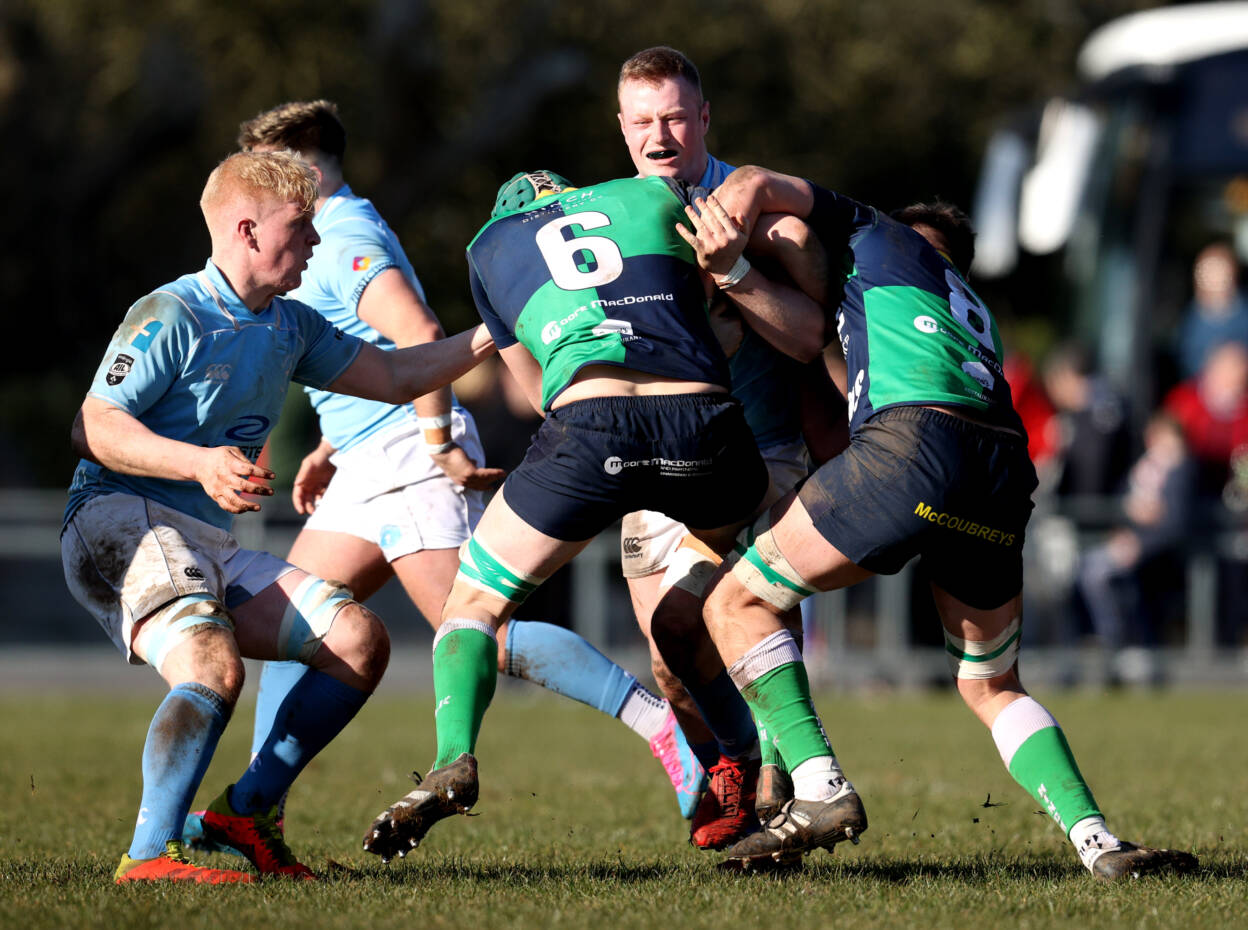 With the one-up, one-down system in place this season, relegation will be decided by a two-legged play-off between UCC and Ballynahinch, whose own battle against finishing in the bottom two ended with a gut-wrenching 29-26 loss at Garryowen.

Bradley Luney’s second try of the game – a charge-down on the 80-minute mark – had ‘Hinch four points up, but senior debutant Matthew Sheehan emerged as Garryowen’s last-gasp hero, touching down right at the death.

The County Down side, who outscored Garryowen by four tries to two, were also left to rue their indiscipline. Munster Academy talent Tony Butler, who only turns 20 next month, accumulated 19 points from five penalties and two conversions. 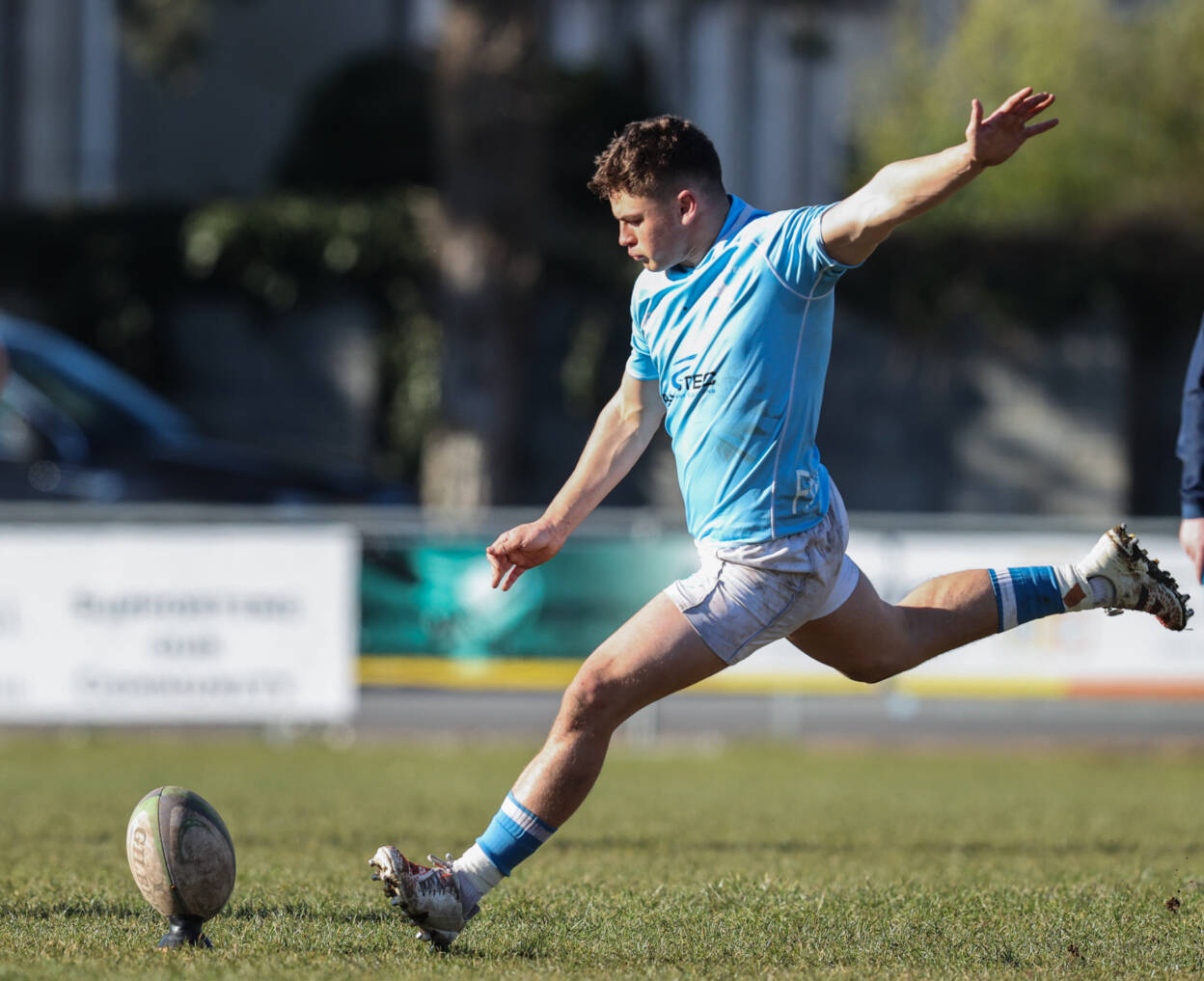