Ireland head coach Andy Farrell admitted it was an unusual experience to play the best part of an hour with two extra men during their 57-6 bonus point victory over Italy.

Following an early injury to starting hooker Gianmarco Lucchesi and a red card issued to his replacement Hame Faiva, for a high challenge on Ireland’s Dan Sheehan, the Azzurri were reduced to 13 players before the game had even reached the end of the first quarter.

This is due to World Rugby Law 3.20, which stipulates that a team that is unable to continue with contested scrums as a result of player being sent off must lose an additional player from their side.

As a result, Italy’s number 8 Toa Halafihi had to leave the pitcn after winger Pierre Bruno, on his Guinness Six Nations debut, had already made way for loosehead prop Ivan Nemer.

With everything that had happened up to that point, it is no wonder the remainder of the game, which included the late sin-binning of Italy replacement Braam Steyn, was such a surreal occasion for Farrell and his players.

“There’s not too many times we’ve played an international match against 12 players. There’s plenty we can take away from it,” said the Ireland head coach afterwards.

“At the start of the game, getting off to a good start. Going up seven points is a nice enough start, then I thought we started to overplay a little bit. I thought Italy defended really well. They were aggressive in defence and that was before they went down to 13 men.

“Because of our lack of accuracy and obviously their tenaciousness in defence, I thought there were a few errors that we could have tidied up before the situation happened with 13 men. Then we get to that point with 13 men. It is just weird.

“We understand why the rule was brought in, but at the same time in situations like that and occasions like that, it will bring the rule back to everyone’s attention and they’ll look at it.

“The space that you think is there, they’re obviously always going to throw caution to the wind and kamikaze style defence at times, where they were flying up off the line. Hitting us man-and-ball, putting our skills under pressure. We needed to be calmer and more accurate.”

Nonetheless, Farrell was not losing sight of the fact that Ireland were emphatic winners in the end with Ulster’s Michael Lowry grabbing a brace of tries on his international debut.

The diminutive full-back could have wrapped up his hat trick during the closing stages, but instead released James Lowe for his second score of the day in the left corner.

“At the end of the day saying to the players that it’s 57-6, we’d have certainly taken that before the game. It puts us in a good position now as far as the points difference is concerned.

“Obviously onto the next two matches that we need to win to be in contention of winning the competition.

“He (Lowry) was great. He was lively and he was as brave as we knew he was going to be. I think getting the two tries and then being in space to score his third and passing it on to his mate, James Lowe, in the corner typifies what Mikey is all about.

“Everyone involved in the squad, the management and the players are absolutely made up for Mikey. His mum, his sister and his girlfriend, it’s a big day for them.” 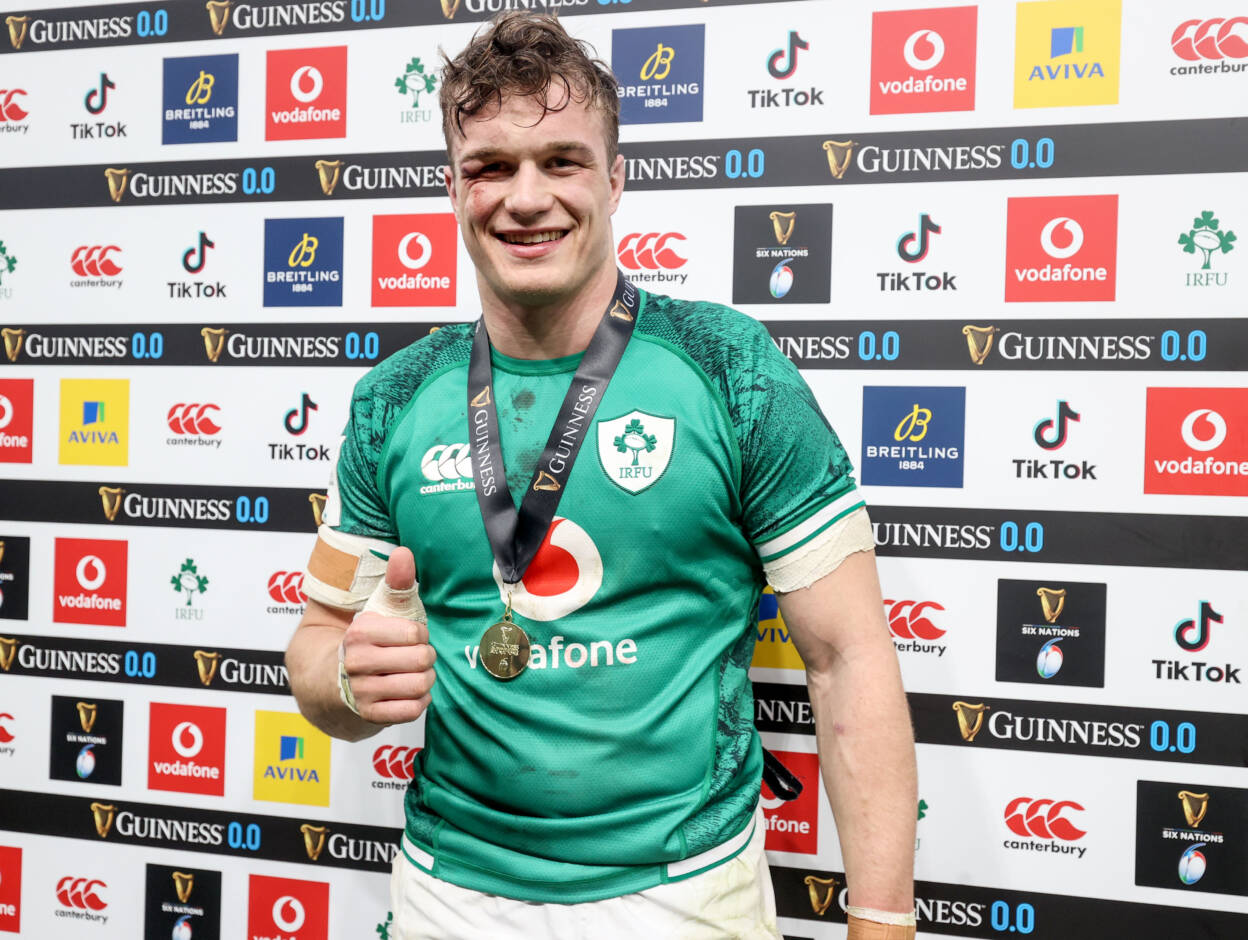 Although he was not one of the seven players to cross the whitewash at the Aviva Stadium, Josh van der Flier delivered another impressive display at openside flanker and was selected ast the Guinness Six Nations player-of-the-match.

Farrell is delighted with the improvements the back rower has made to his game over the past 12 months, acknowledging: “He’s very consistent at the minute of playing at a very high standard. It sums Josh up, when he comes into the changing room after the game.

“He was turned over in the game and that’s the only thing he could think about. Whether he needed to keep his feet under him a little bit more.

“He did that pretty well throughout, keeping his feet and driving on. He’s coming on a treat at this level. He’s very consistent and that’s what he wants to be.”