Ruthless Lansdowne racked up seven tries against Young Munster to emerge as 46-13 winners of a one-sided Energia Bateman Cup final in Cork.

Lansdowne’s backs hogged all seven tries, including a second half hat-trick from Sean Galvin, as they romped to the club’s seventh Bateman Cup crown – a sixth outright and they shared the 2020 title with Cork Constitution. 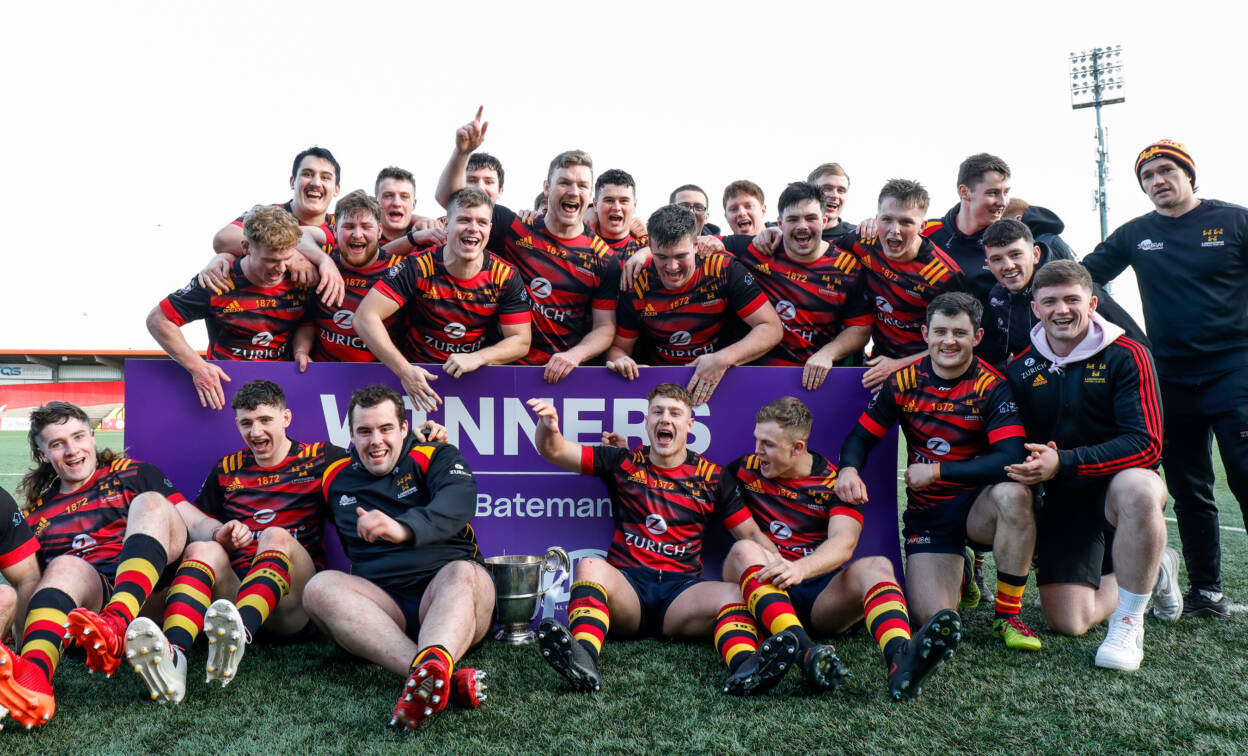 Seeking their first Bateman Cup since 1928, wind-backed Young Munster built an early 6-0 lead only for a Foley-inspired Lansdowne to hit back with two well-taken tries.

Michael Silvester and Andy Marks both crossed to the right of the posts, making it 12-6 at half-time, and a Galvin try early in the second half widened the margin to 11 points.

Wearing red jerseys to avoid a colour clash, there was no stopping Lansdowne as they cut a tiring Cookies defence open for further scores from Paul Kiernan, Galvin (2) and Hastie, who finished with 12 points.

Young Munster gave their large travelling support something to cheer about late on, evergreen replacement prop Paul Allen enjoying a fine break to set up Conor Phillips for a last-minute consolation try. 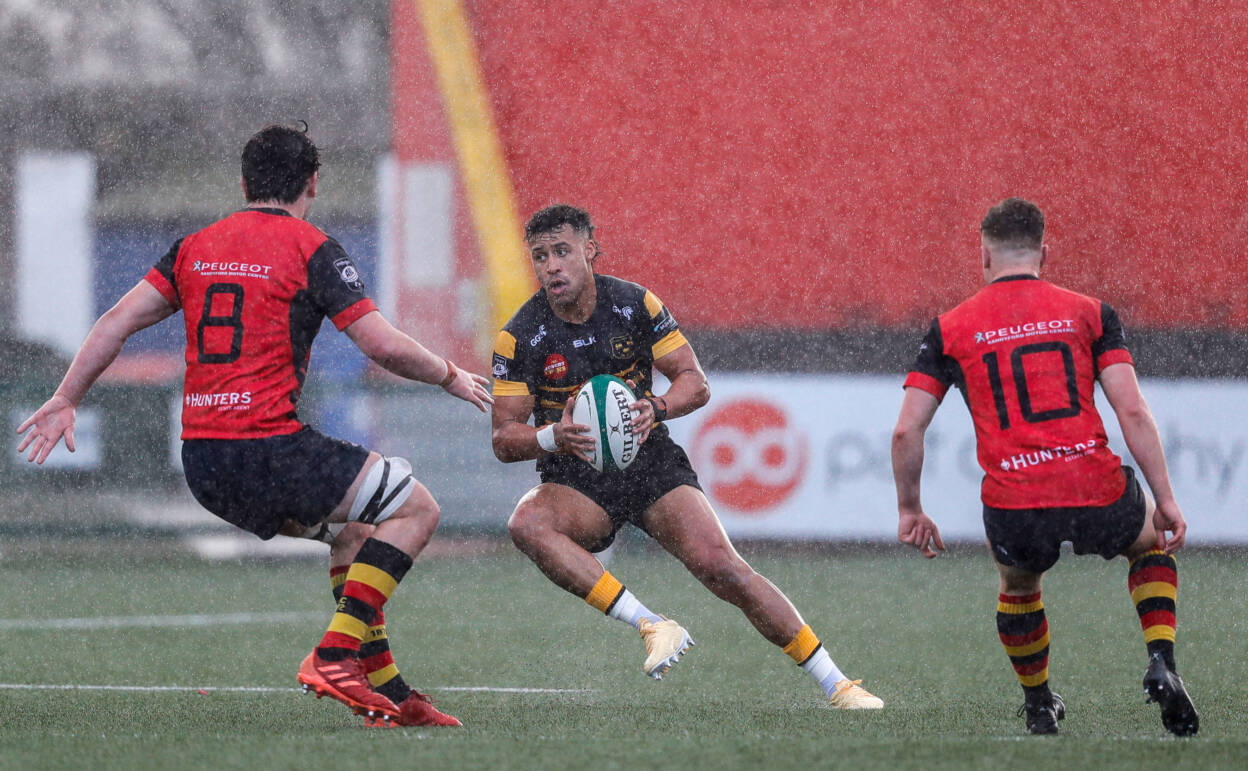 Both teams showed an early willingness to run the ball on the all-weather pitch, Stephen Madigan breaking from deep for Lansdowne before Munsters’ Eoin O’Connor galloped down the right touchline following Phillips’ pop pass.

Keynan Knox forced a scrum penalty for the Cookies, and although fellow prop David Begley knocked on closer to the posts, Lansdowne infringed at the breakdown a few phases later and Cusack claiming the opening points.

The young out-half doubled the lead from distance, using the wind to very good effect, but Lansdowne scored from their first real opportunity in the 17th minute.

An excellent sniping run from Leinster scrum half Foley brought them up to Munsters’ 22, and some slick hands from Foley and Marks found Silvester on the right wing, the former Leinster back stepping inside a defender and reaching over in impressive fashion.

After Madigan’s curling conversion went wide, Young Munster failed to score from gilt-edged maul and scrum chances, an early engagement at the latter letting Lansdowne off the hook. 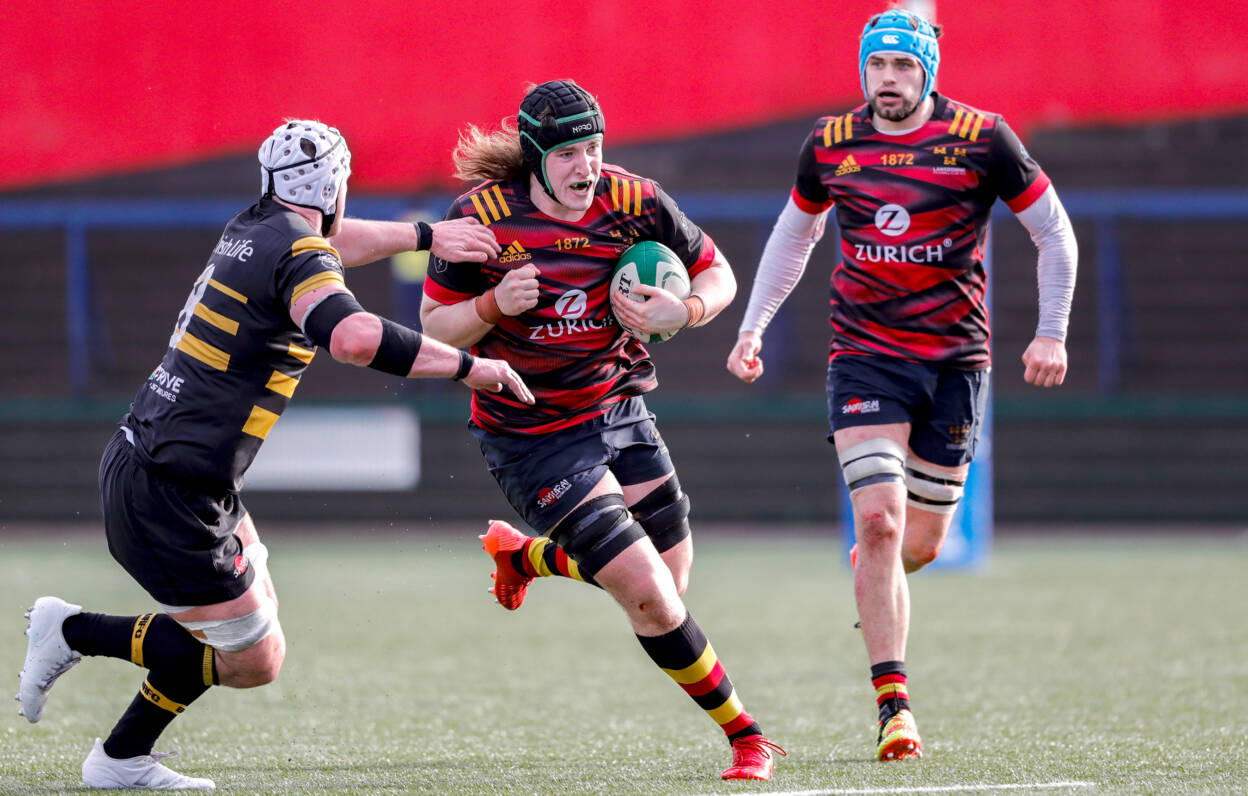 The second quarter was marred by a prolonged rain shower, but Lansdowne showed their ability with ball in hand, creating a slick second try on the half hour mark.

Foley’s superb reverse pass sent Mark Boyle bursting up into the 22 and he fed centre Marks to finish off. Madigan judged the wind well to convert from the right.

Great hands from Lansdowne’s backs and forwards created a late opening for Galvin, but Conor O’Shaughnessy made an important cover tackle and also a follow-up challenge.

Nonetheless, the nippy Lansdowne winger got the score he deserved just four minutes after the restart. The Cookies again failed to turn pressure into points, an extra roll on the ground by Tom Goggin leading to a frustrating penalty.

Lansdowne made it back to halfway and then Foley sent Silvester gliding through a defensive gap, the final pass delivered to Galvin who supplied a crisp finish near the left corner. 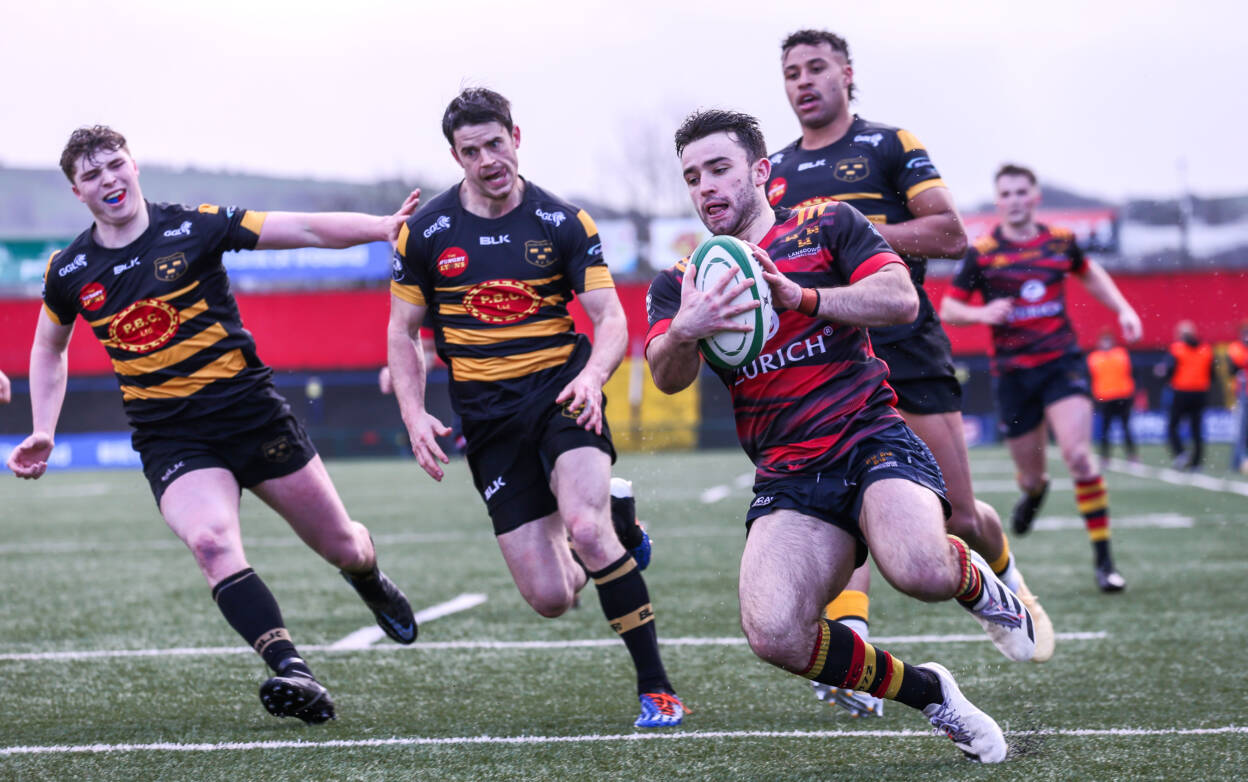 Madigan missed the difficult conversion but Hastie followed up with a well-struck 53rd-minute penalty, leaving Gearoid Prendergast’s side with a 14-point deficit to overcome.

Munsters missed the attacking spark of Conor Hayes and Patrick Campbell, who is on Ireland Under-20 duty, and Lansdowne really put their Division 1A rivals to the sword.

Hastie was then central to another pacy surge that ended with Galvin dotting down in the right corner. Lansdowne continued to find defensive holes, Silvester was hauled down short as he threatened to double his tally. 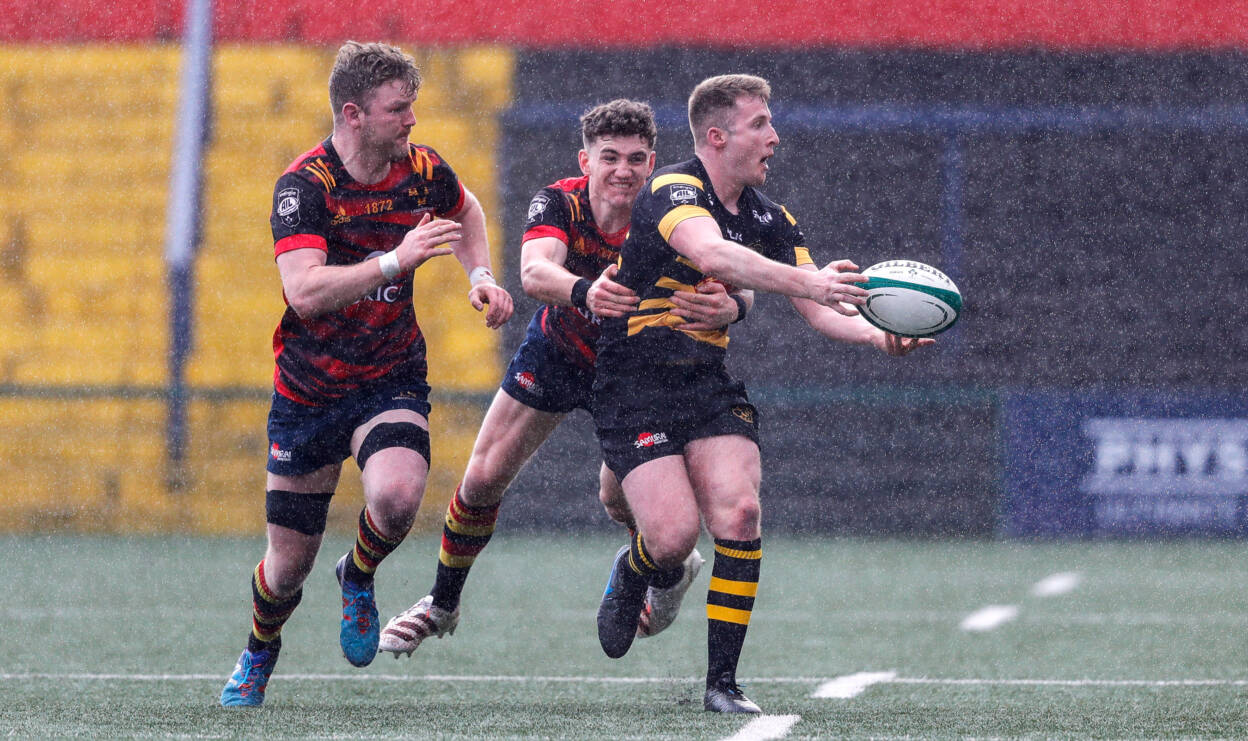 The Dubliners’ pursuit of scores was relentless, Corey Reid coming off the bench to make a big midfield bust on the 70-minute mark. Hastie used the quick ball to wriggle over to the right of the posts and convert.

Clinical again from turnover ball, quick hands released Galvin to cut in past three defenders and score in the 73rd minute. Madigan converted before Allen showed great pace for a big man – pulling his hamstring in the process – to give Phillips the final say. 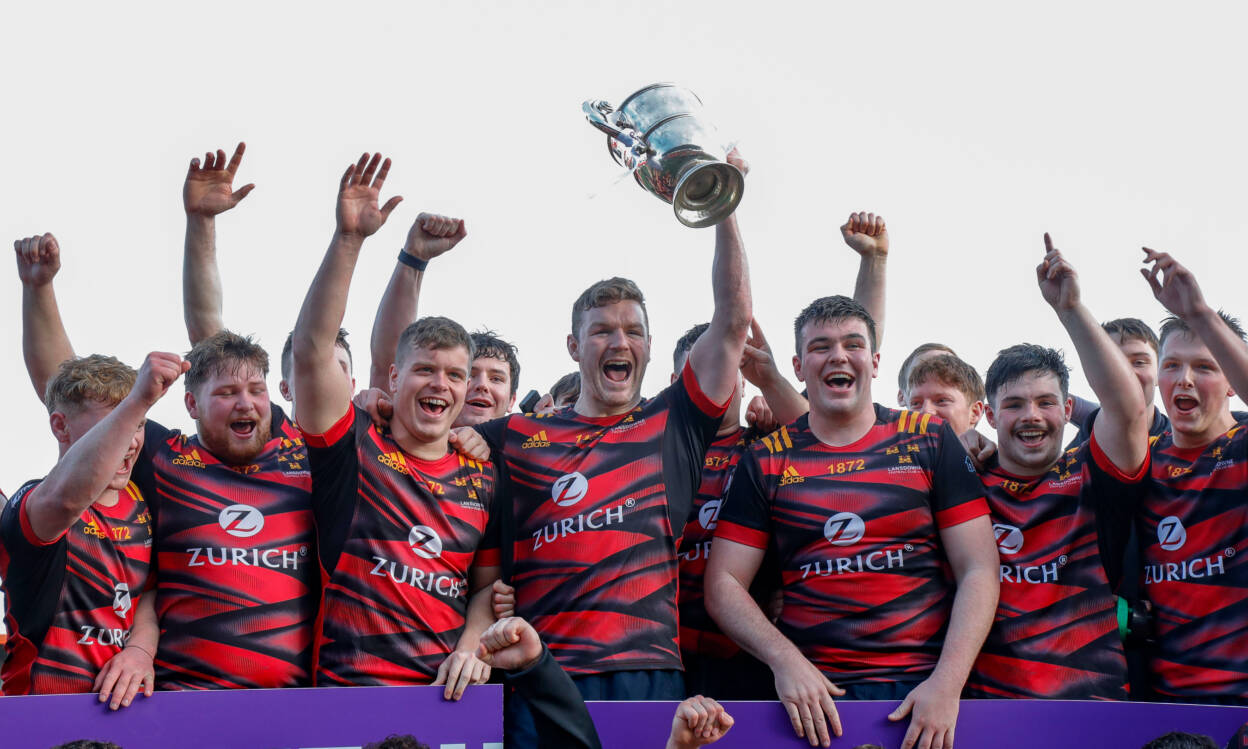