Home wins were the order of the day in Energla All-Ireland League Division 2C, and most notably Sunday’s Well broke their duck with a much-needed result against Bruff.

Sunday’s Well gave themselves a huge boost, surviving some heart-stopping moments to earn a maiden 20-13 win over Munster rivals Bruff at Musgrave Park.

Bruff led on two occasions with Jack O’Grady scoring their only try, while Paul Collins kicked the other eight points in an end-to-end contest on the all-weather surface.

However, the ‘Well won out – much to the relief of head coach Denis Hurley and watching home crowd – thanks to tries from Gary O’Sullivan, Billy Pope and Sean McCarthy, whose half-back partner Fabien Loughrey kicked five points.

The result moves Hurley’s men level on nine points with Clonmel at the foot of the table, after the Tipperary side went down 27-11 to table toppers Enniscorthy in their opening league game of 2022.

It was far from plain sailing for ‘Scorthy, as quick ruck ball allowed winger Conor Pearson finish off a Clonmel try, before two penalties either side of half-time from Gavin Whelan had them well in touch.

The Wexford outfit still had work to do at that stage, leading 17-11 thanks to first half tries from Liam Stamp and ever-influential centre Nick Doyle, who bagged a brace.

Clonmel drew Enniscorthy into a forwards battle, though, and exerted pressure at scrum and maul time. Most of the second half was played out in midfield, defence-dominated until a moment of magic from Richard Dunne.

Introduced as a half-time replacement for Enniscorthy, Dunne was fed by Doyle during the final few minutes. He weaved past three would-be tacklers and then jinked inside the final defender for a terrific match-winning try.

It secured the bonus point for Ben Manion’s charges and out-half Ivan Poole widened the winning margin to 16 points in the end, converting before sending over a late 35-metre penalty. 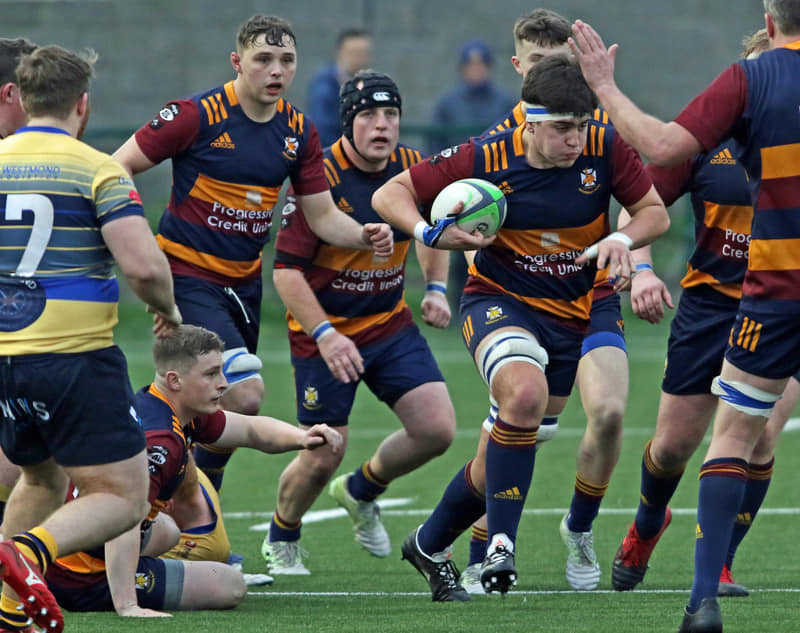 Second-placed Skerries won a nail-biting clash with Bangor, prevailing 14-13 at home courtesy of Tom Mulvany’s first half try and a trio of penalties from replacement Shane Murphy.

Murphy came on for injured out-half Paul O’Loghlen and played a key role for Skerries. Bangor had a try in each half at Holmpatrick but were left to rue a couple of missed kicks.

Tom Rock’s Seasiders were aiming to follow up on their 27-15 bonus point success from before Christmas, and they got off to a flying start in the rematch.

Third-minute lineout possession was kicked out wide by Gareth Millar, finding winger Mark Widdowson who wrong-footed a defender and beat the cover for a slick try in the corner. Out-half Millar missed the difficult conversion.

Nonetheless, Skerries swiftly levelled as Bangor misfired at a lineout, deep in their own 22, and Mulvany caught the loose ball for a simple finish from a few metres out.

Murphy was successful with two penalty efforts to give the Goats an 11-5 interval lead. Millar was unfortunate to see a shot from near halfway bounce away off the left hand post.

A high penalty count was really hampering Bangor, but after losing Declan Horrox to the sin bin and regrouping at the break, the visitors hit back strongly. 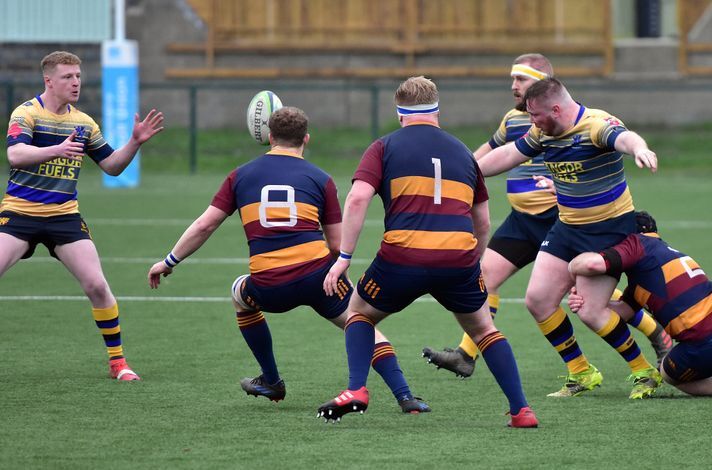 Millar opened the scoring half’s scoring with a well-struck penalty, making it a three-point game, but Bangor soon had Ally McIvor yellow card for not rolling away after a tackle.

Skerries could not take full advantage, only adding three points through Murphy. Back came Bangor, striking again out wide through Widdowson after a strong maul had almost earned them a penalty try.

Crucially, Millar missed the difficult conversion, leaving Skerries a point ahead, and both place-kickers were off target with late penalty attempts as the Dubliners hung on for a hard-fought victory.

Having lost by 13 points in the last round, Tullamore turned the tables on Midleton to win 18-10 at Spollanstown. They have closed the gap on third-placed Bangor to three points.

Hooker Cathal Feighery was hugely influential with his accurate lineout throwing and several turnovers at the breakdown. Brian Geraghty’s sharply-finished early try set the hosts on their way.

The Tulliers pushed on to lead 13-0, with goal-kicking captain Karl Dunne punishing a high tackle on lively out-half Craig Strong and rewarding a strong scrum from the home pack, midway through the first half.

The second quarter saw Midleton storm back, however, and they suddenly dominated possession. Rory Horgan’s try and five points from Stuart Lee reduced the arrears to just three points.

It would have been more but for some excellent defensive work from Ciaran Ennis and Feighery’s ability to sniff out turnovers.

Play was centered around the middle third of the pitch during an attritional second half, but Tullamore used a ground-gaining maul and the quick thinking of their backs to settle the issue.

Mark Kennedy barged past two defenders, providing the momentum for centre Dunne and he spotted the space out wide, sending over a cross-field kick for winger Cathal Farrell to finish off the game’s decisive score.

Omagh started and finished the try-scoring as they avenged their pre-Christmas defeat to City of Derry. The Academicals triumphed 24-8, early tries from Luke Hanson and Kyle Beattie laying the platform.

The hosts were 10 points up in as many minutes at the Thomas Mellon Playing Fields, out-half Beattie breaking through for a brilliant seven-pointer from halfway, using a dummy and fend.

Although a subsequent hamstring injury forced Beattie off, Omagh remained in control, moving 24-3 clear on the hour mark when Ryan Mitchell ran back a loose kick and beat three defenders for a superb solo bonus point effort.

City of Derry rallied with a late consolation try but were very much second best on the day. They now face into back-to-back home games against Skerries and Midleton.