Clontarf dominated from start to finish to complete a season’s double over Garryowen, winning 36-7 at Castle Avenue to start 2022 as they mean to go on. 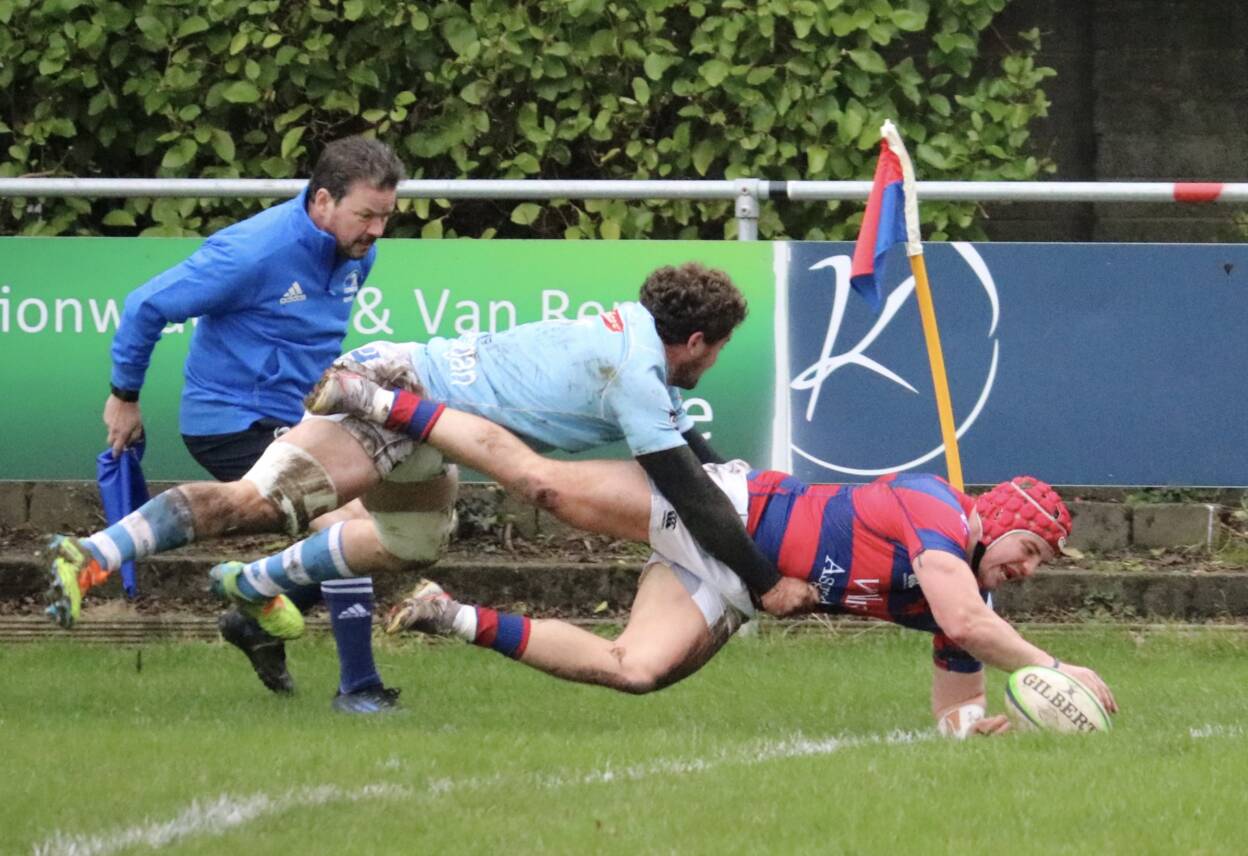 The Division 1A leaders resumed their Energia All-Ireland League campaign in impressive fashion, with hooker Dylan Donnellan taking his top-scoring try haul to 10 in as many rounds.

Leinster’s David Hawkshaw found Cian O’Donoghue with a cross-field kick and he popped the ball up out of a tackle for Michael Courtney to score the opening try.

Angus Lloyd snapped up the second try, sniping over from a close range ruck, and further touchdowns from Alex Soroka, an Ireland Under-20 international just last summer, and Donnellan sealed the bonus point before half-time.

Flanker Soroka broke a tackle and took another defender with him as he scored from 10 metres out, benefitting from the quick ruck ball that ‘Tarf were producing. 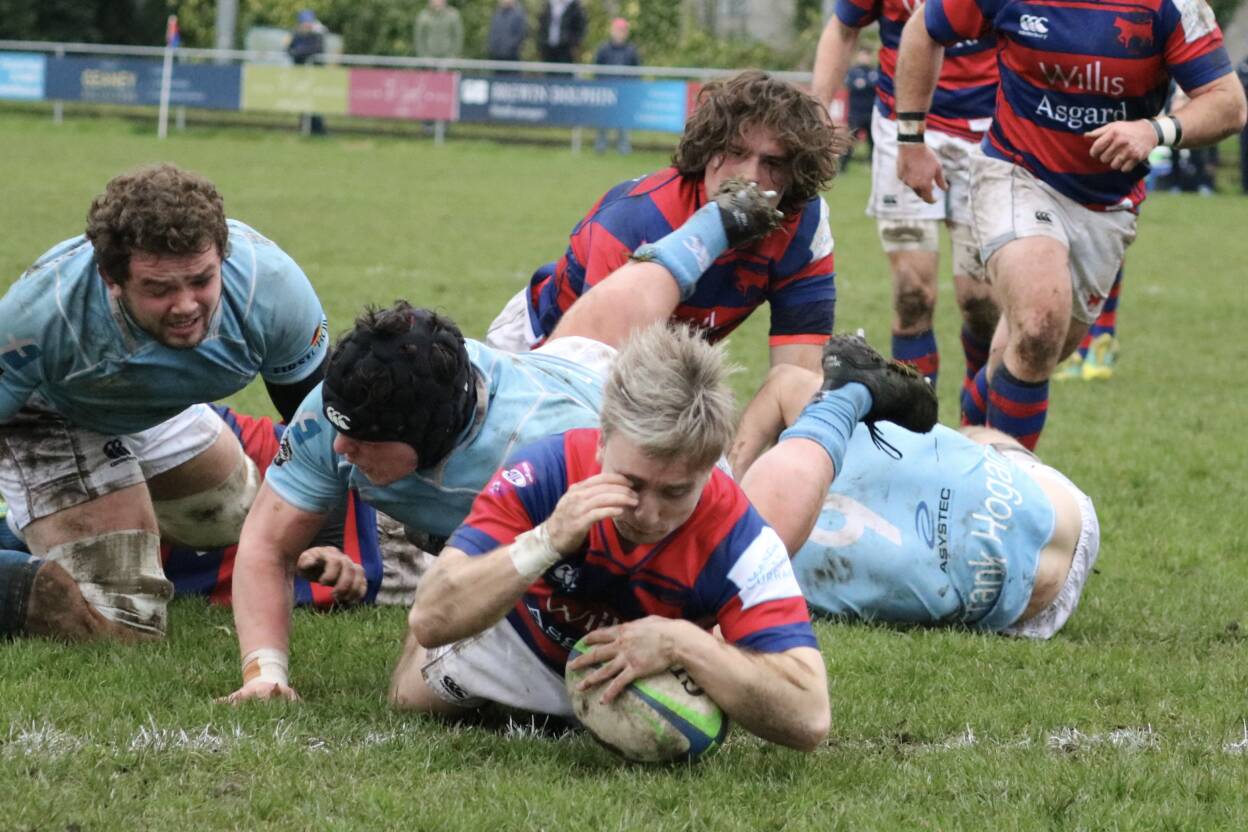 Soroka won the lineout that set up Donnellan for a trademark maul score, and with out-half Hawkshaw kicking well and squeezing in a penalty, Garryowen were left trailing 29-0.

Showing their own set piece strengths, a sustained bout of pressure from the Light Blues led to Munster flanker Jack Daly sniping over from a 53rd-minute ruck.

However, Donnellan answered back just five minutes later, burrowing over after good carries from replacement Martin Moloney and Adrian D’Arcy, and an error-strewn final quarter failed to produce any further scores. 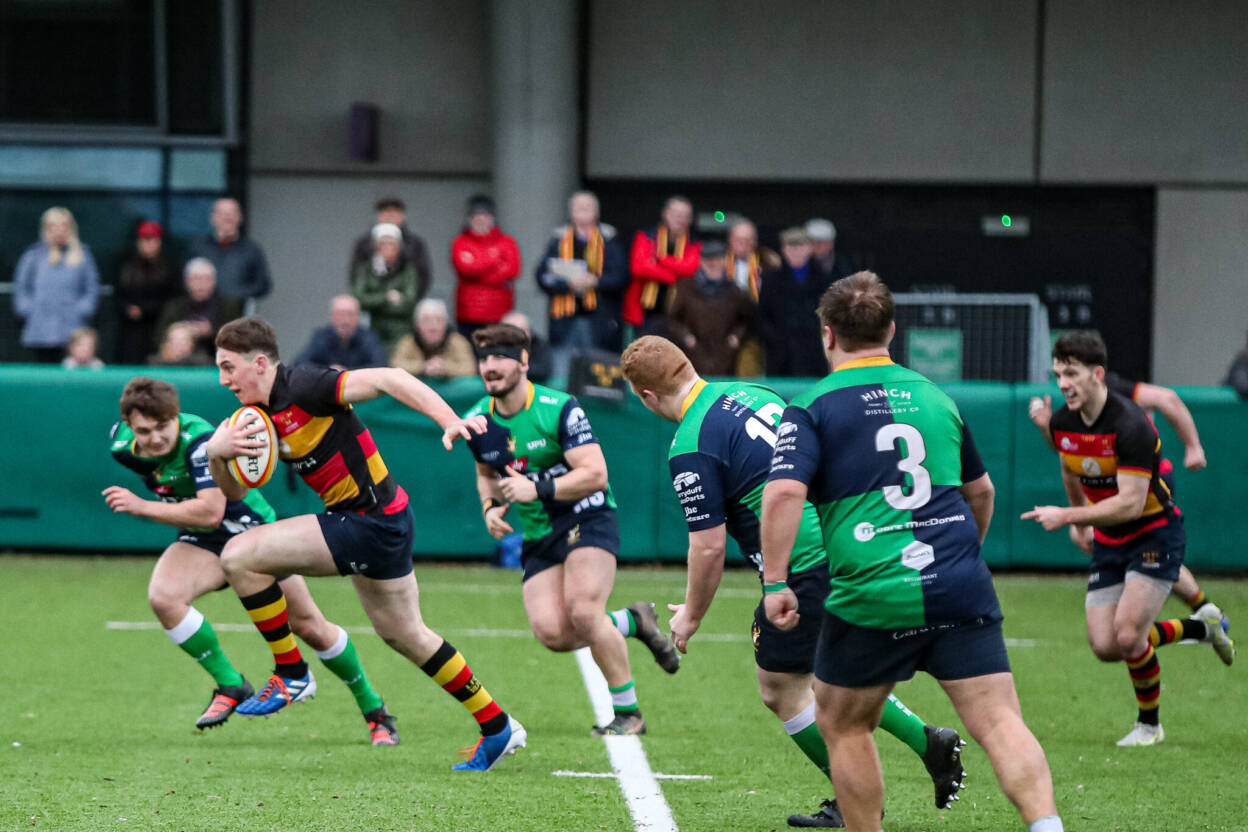 Meanwhile, second-placed Lansdowne also racked up a big score in downing Ballynahinch 47-17 on the Aviva Stadium’s back pitch.

Winger Sean Galvin made it three tries in a week with a well-taken brace, while Ireland Under-20 prospect Charlie Tector converted six of the hosts’ seven scores.

Ballynahinch rallied during the third quarter with Rory Butler crossing and the pack earning a penalty try.

Lansdowne, though, did much of the damage in the first half, storming into a 33-3 lead with Connacht pair Greg McGrath and Peter Sullivan getting on the scoresheet.

McGrath muscled over for the opener, after Mark Boyle had tapped a penalty five metres out. Nice hands from the Lansdowne backs released Sullivan for the right corner in the 18th minute.

Second row Joey Szpara broke from inside the hosts’ half, laying out at halfway for the supporting Boyle to charge downfield. Aaron Cairns hauled him down before the try-line, but the number 8 popped the ball up for the inrushing Szpara to score. 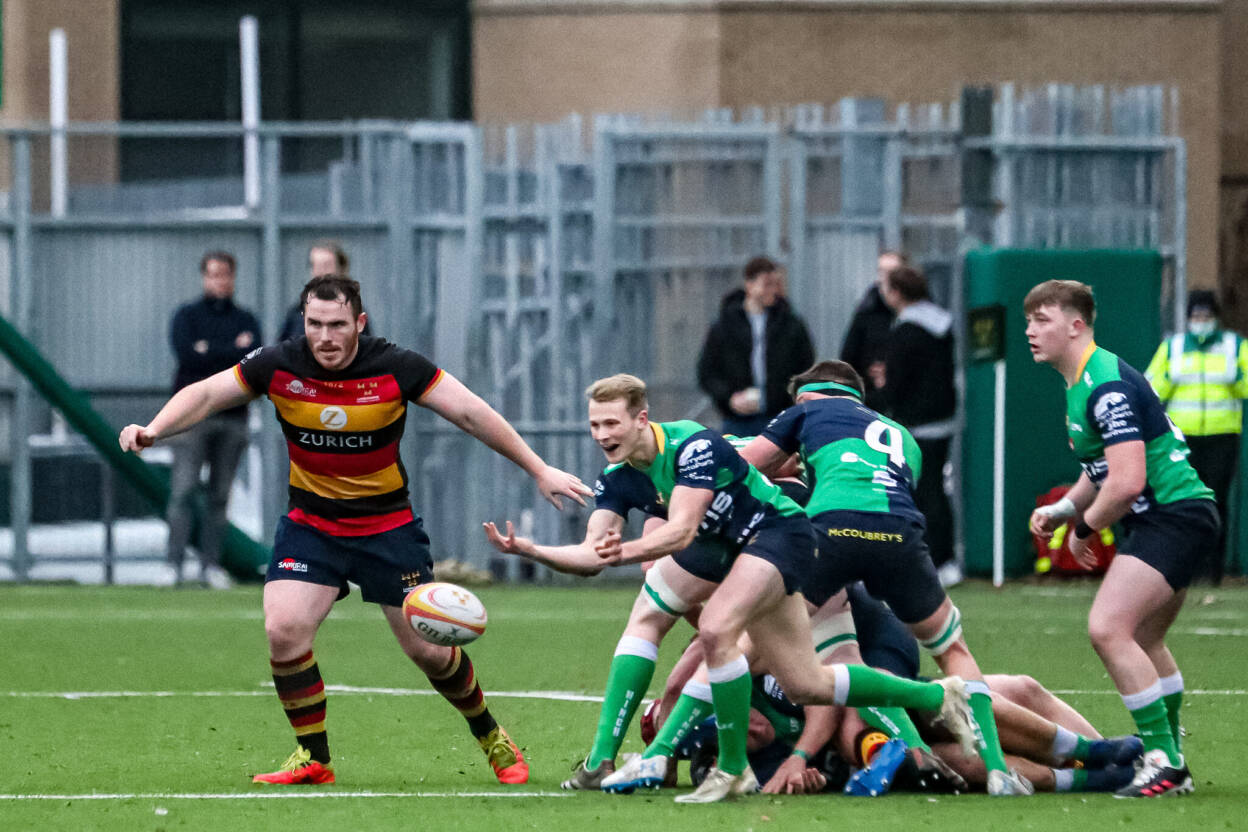 A Ballynahinch move broke down in the 24th minute near their own 10-metre line, allowing centre Andy Marks to intercept and run in Lansdowne’s bonus point try. They soon added a fifth through Galvin.

A slick midfield move took the headquarters club to 40 points, Jack Matthews combining with Clive Ross to send Marks through a gap, and scrum half Matthews was up in support to finish off to the right of the posts.

Replacement Butler bounced off a couple of tackles to open ‘Hinch’s try account, after fellow backs Paddy Wright and Greg Hutley, who had kicked an early penalty, made some good metres with ball in hand.

Just when the visitors were gaining some momentum, an attack broke down and Galvin gobbled up possession, breaking clear from just outside the Lansdowne 22 to complete his brace.

‘Hinch clawed back those seven points with the final try of the game, their forwards mauling through and forcing a collapse from Lansdowne right on their line. Referee Kieran Barry awarded a penalty try. 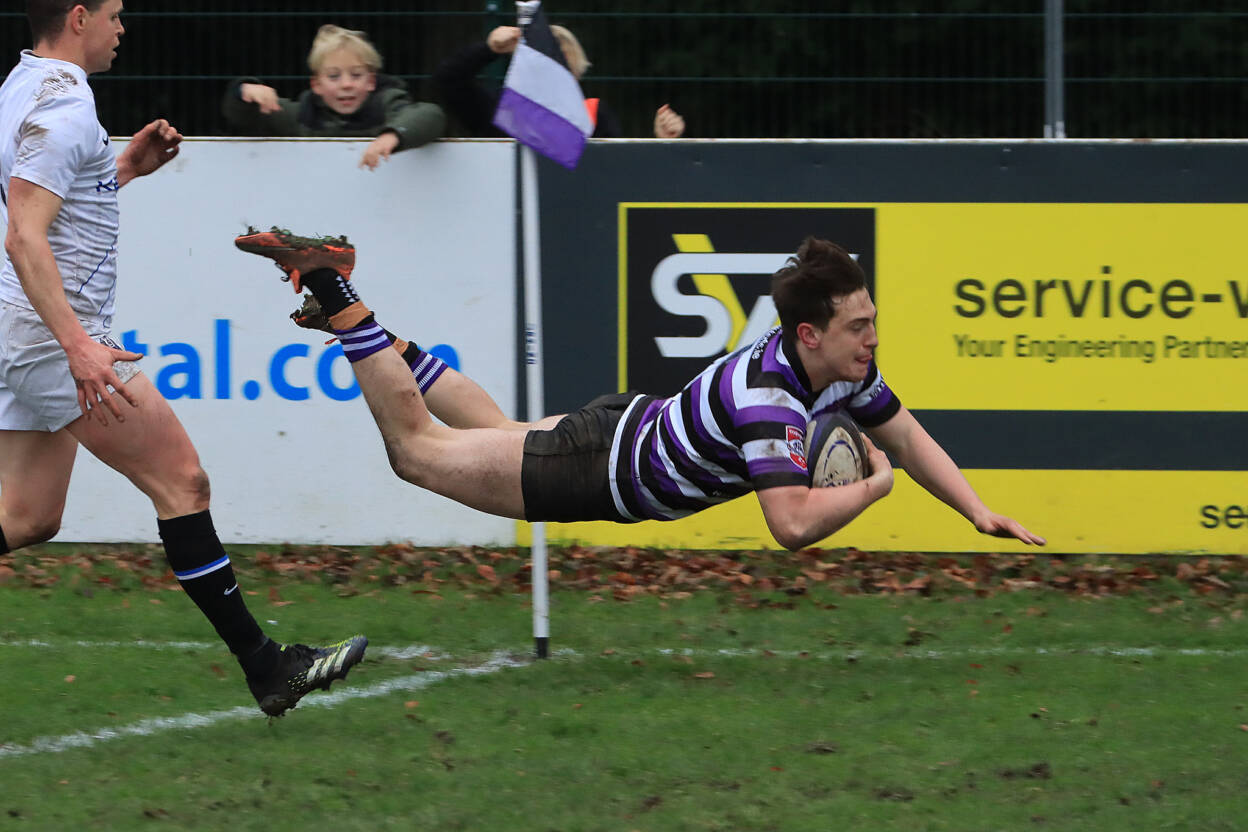 Terenure moved back into the top four and Con slipped to sixth in the table, following two Craig Adams tries in a tense 13-6 home victory.

‘Nure lost Cathal Marsh to an injury during the warm-up, but James Thornton was a more than able deputy. Nonetheless, he watched his opposite number, Con captain Aidan Moynihan, kick the visitors into a second-minute lead.

In a scrappy first half, clear-cut opportunities were hard to come by and ‘Nure had to wait until the 38th minute for their breakthrough try. 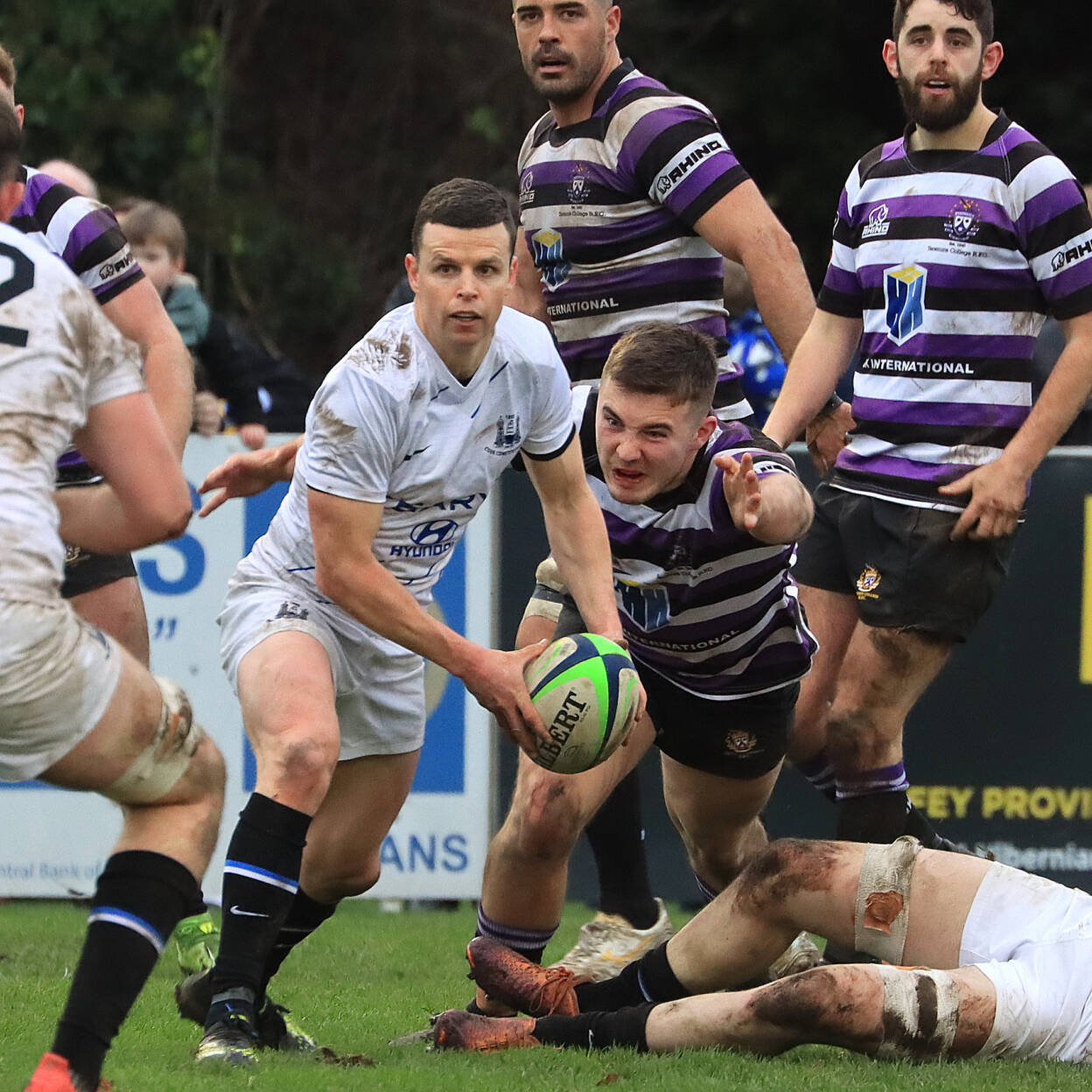 Adams raced over on the left wing following some excellent approach work from Luke Clohessy and Adam La Grue. Con were then left ruing a late decision to go for touch when they were subsequently turned over.

Con had a further setback in the 54th minute when flanker Mike Casey was sin-binned, and from a kick through by La Grue a few minutes later, Adams showed great pace to ground the ball before the end line.

The post denied Thornton’s conversion and although a Moynihan penalty pulled it back to 10-6, Thornton had the final say with a well-struck kick from the right. 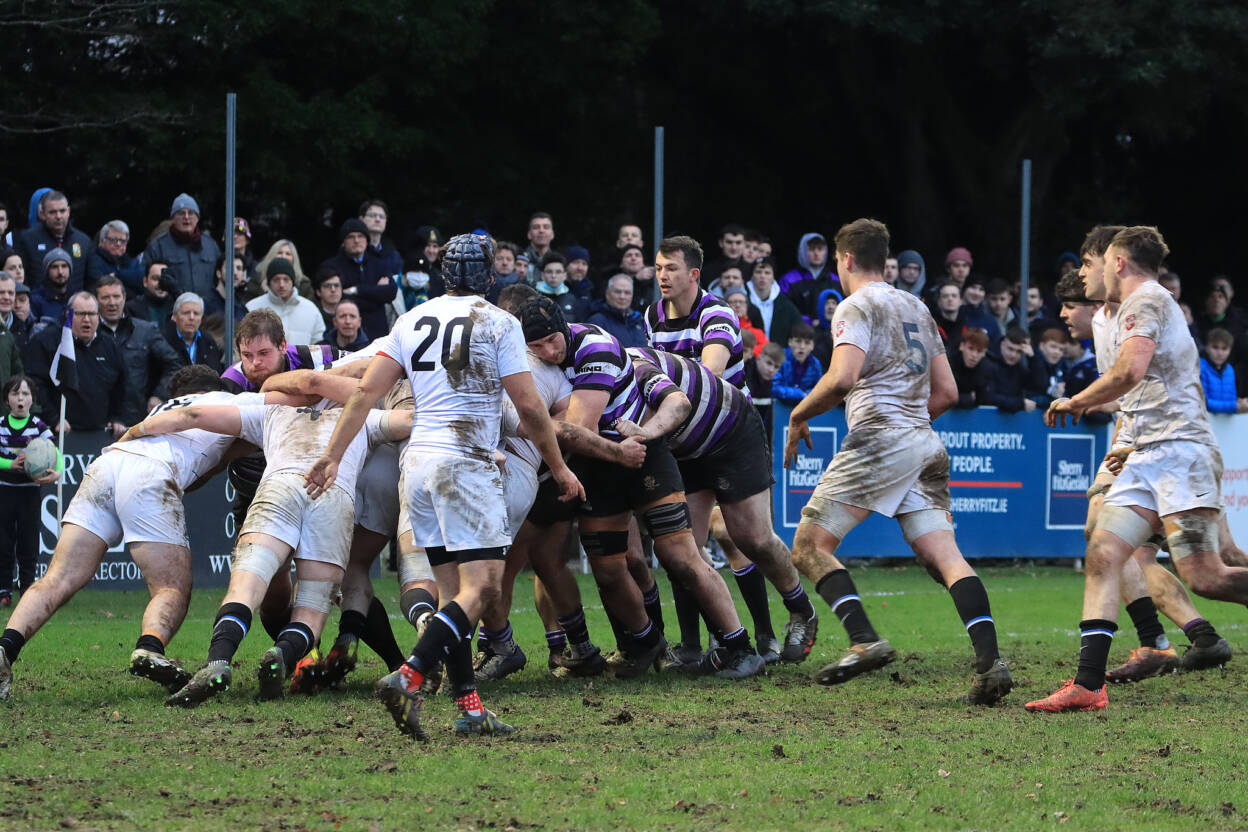 The sides were deadlocked at 20-all – the students had brilliantly erased a 15-3 deficit with tries from James Culhane, David Ryan and Dylan O’Grady – but the Munster-capped Campbell decided the game in the hosts’ favour.

The Cork youngster, who was sprung from the bench, showed serious class when he latched on to Evan Cusack’s looped pass to score the winning try.

Following up on an early Cusack penalty, the Cookies had started the try-scoring when Conor Hayes intercepted and tore downfield to take to his impressive try-scoring haul to nine for the league season. 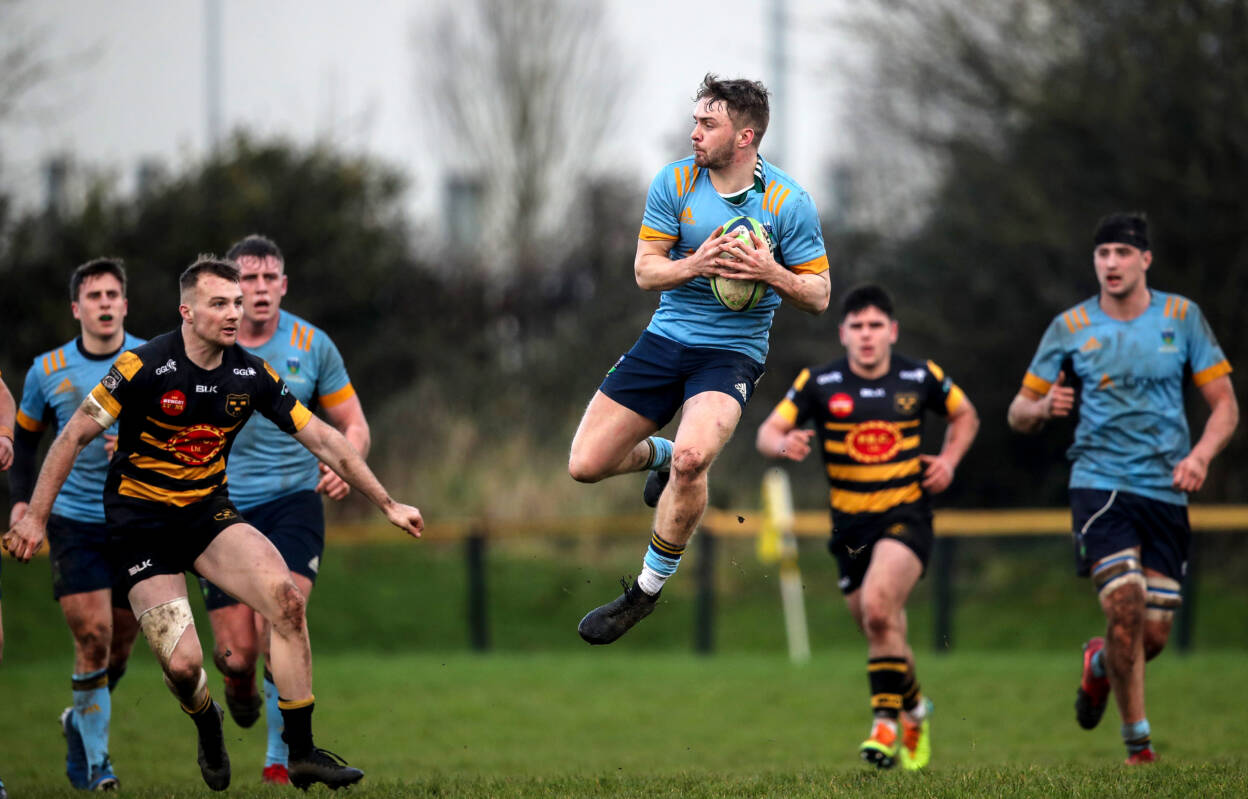 Munsters soon cancelled out a Tim Corkery penalty, Conor O’Shaughnessy countering from a Corkery grubber kick to breach the defence and scrum half Donnacha O’Callaghan gave a return pass for Pa Ryan to score with Cusack converting.

Nonetheless, Culhane replied for UCD following some impressively patient build-up play, and they got back level early on the resumption when O’Grady made an incisive break and flung the ball wide for replacement Ryan to score.

Approaching the hour mark, the Limerick men retook the lead at 20-15. Half-time replacement Campbell managed to race clear into space, and he linked with prop Conor Bartley who released the supporting Jason Kiely for their third try of the day.

UCD showed great battling qualities from the restart again, forcing a turnover. Eoin O’Connor was sin-binned soon after, and a tap penalty saw full-back O’Grady bag a try in the right corner.

Some sterling defence from College kept the Cookies at bay, but Campbell showed his finishing skills right at the death before Cusack’s touchline conversion made it a seven-point winning margin. 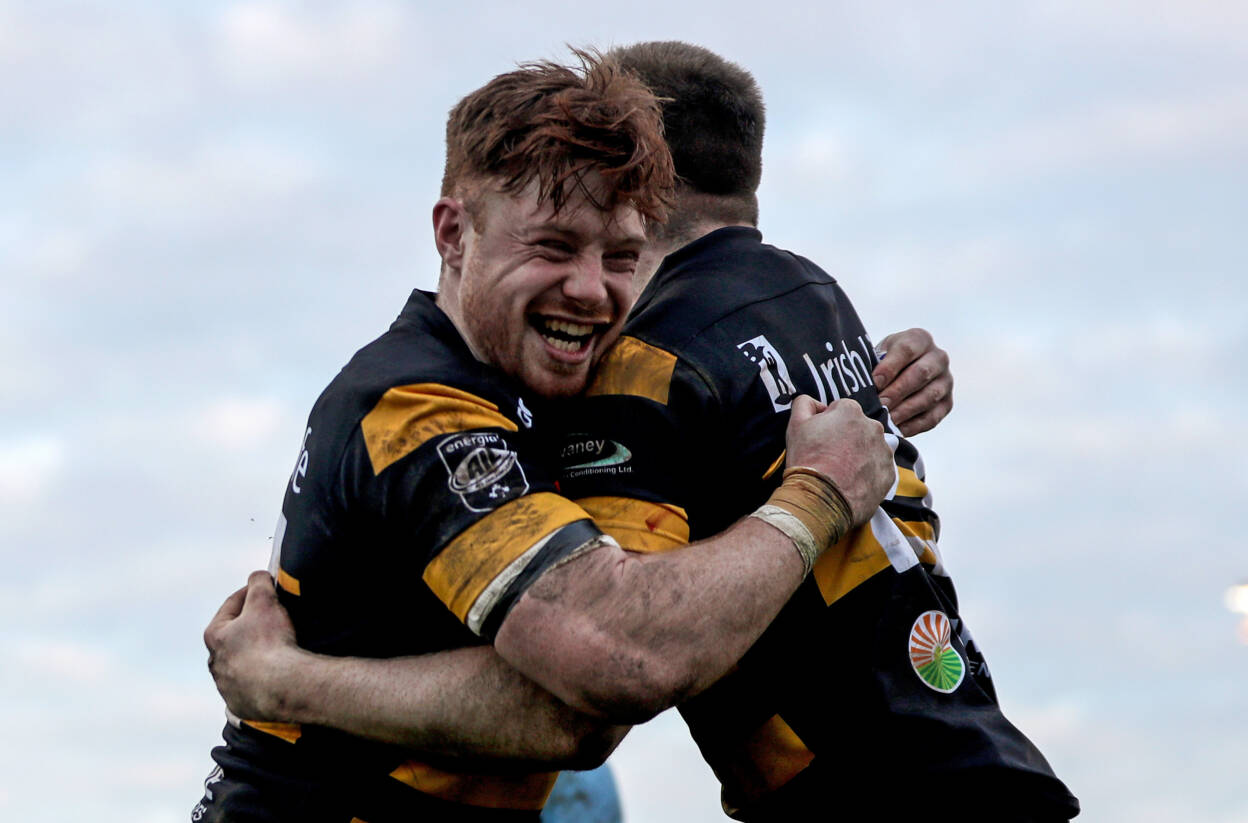 Dublin University are just two points outside of the top four after handing UCC an eight-try 55-0 beating at the Mardyke.

It was his break that set up his half-back partner Louis O’Reilly for the opening try, before impressive debutant Louis McDonough and Leinster’s Rob Russell both dotted down to make it 22-0 at the interval.

McDonough doubled his contribution with another try out wide and Egan starred with a second half brace, including a superb jinking score from just inside the Trinity half.

Lightning-quick winger Ronan Quinn weighed in with a fine intercept effort and also ended the game with a brace, applying a slick finish to Egan’s cross-field kick out to the right.