Unbeaten leaders Skerries were the only team to win on the road in Division 2C last weekend. They squeezed past Midleton, with narrow winning margins too for City of Derry and Omagh Academicals.

Omagh saved the best for last against Bruff, a tremendous offload from Mervyn Edgar putting fellow forward Robbie Sproule in under the posts right at the death.

Kyle Beattie converted with the final kick for a smash-and-grab 17-15 victory, rewarding the Accies’ resilience as they bounced back from a defeat by the same margin in the last round.

However, it was a very attritional encounter and injuries to Edgar (broken hand), Scott Ballantine (hamstring) and Stephen Maclaine (quad) took the shine off the hard-earned result at the Thomas Mellon Playing Fields.

First half tries from Sean D’Arcy and Jack O’Grady had a workmanlike Bruff leading 12-10 at half-time, and a subsequent penalty from Andrew O’Byrne put five points between the teams.

Slotting in at centre for Ballantine who injured himself during the warm-up, Neil Brown ran in an intercept try on the half hour mark, briefly giving Omagh the lead.

The Limerick men snatched it back, and with the breeze stiffening, their 15-10 advantage looked a strong one. Especially with Omagh struggling to get out of their own 22 for long spells.

Nonetheless, even with Jamie Sproule spending time in the sin bin, the Accies dug deep to stay just five points behind, and they were the aggressors during the final minutes.

They heaped pressure on Bruff, forcing a yellow card for a collapsed maul and then pushing for a penalty try from a five-metre scrum.

With Bruff shoring up their set piece, Omagh had to play the ball. Centre Luke Hanson carried well, Edgar did even better, drawing in two defenders and offloading brilliantly for Sproule to score and send the home crowd into raptures. 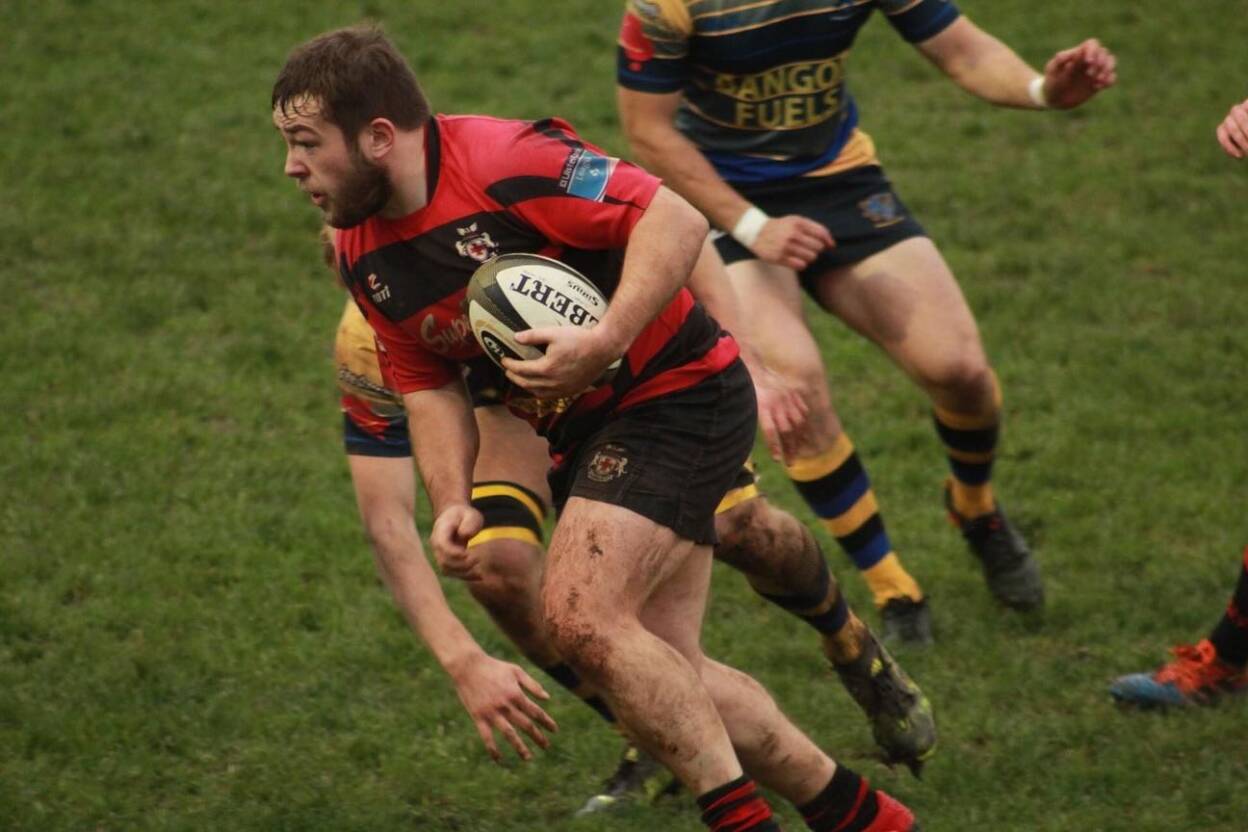 Tullamore proved too strong for second-placed Bangor, running out 34-15 bonus point winners at Spollanstown where centre Conor Dunne produced an exhibition of place-kicking.

He converted from all angles, finishing with a six-from-six return and 14 points. It was also a productive day for Gavin Ridgeway who came off the bench to score two second half tries.

The Tulliers led 13-0 at the interval, their pack standing up to some early Bangor scrum pressure before Dunne opened the scoring with a top quality penalty from the halfway line. 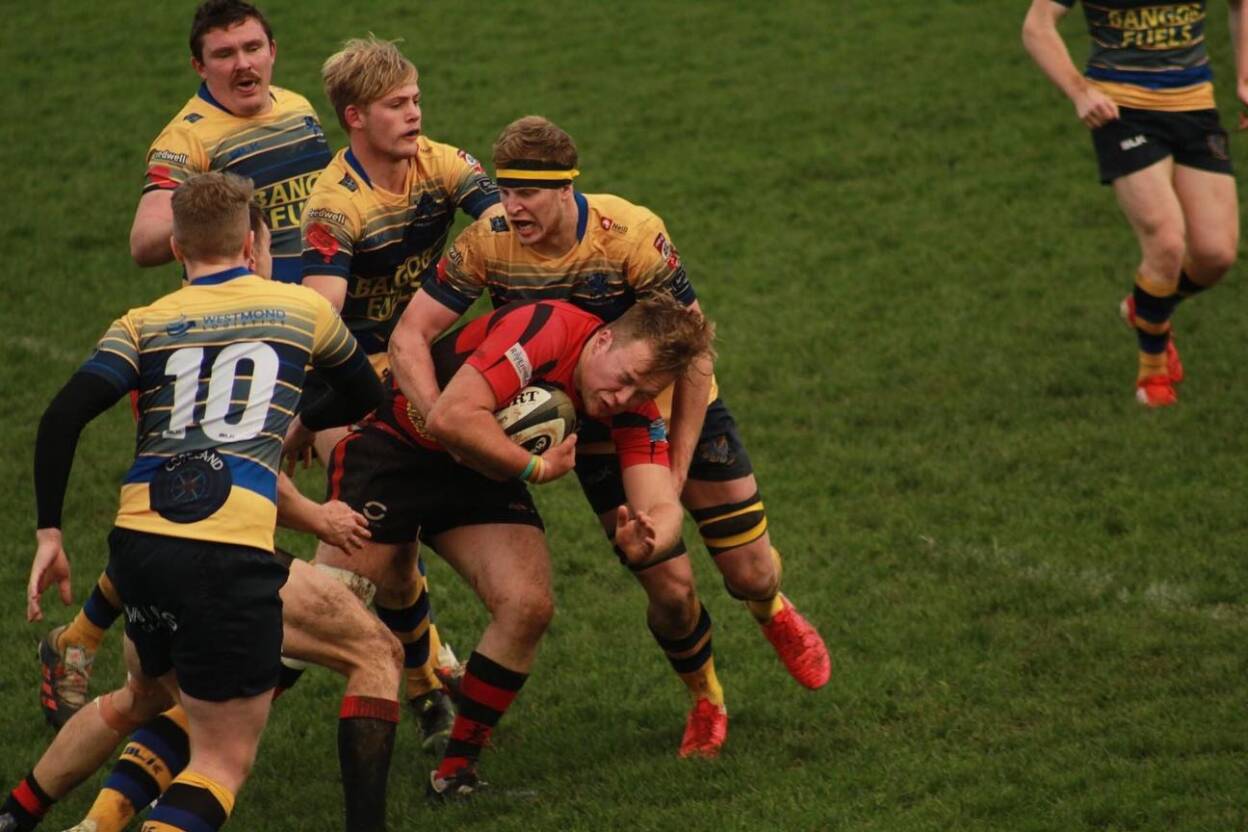 Karl Dunne then ran back a wayward box kick, attacking the space and drawing in a defender to release Sean McCabe for the opening try. Conor Dunne converted and tagged on a further penalty.

The Offaly men tightened their grip on the game with two quick tries on the restart, in response to a Gareth Millar penalty. Brian Geraghty burst through, Craig Strong was up in support and got his pass away for Ridgeway to score.

Jonah O’Keeffe then blocked a Bangor kick, the ball falling to Leon Fox who sped clear from 40 metres out, evading two tackles along the way for a cracking solo score. Dunne made it 27-3. 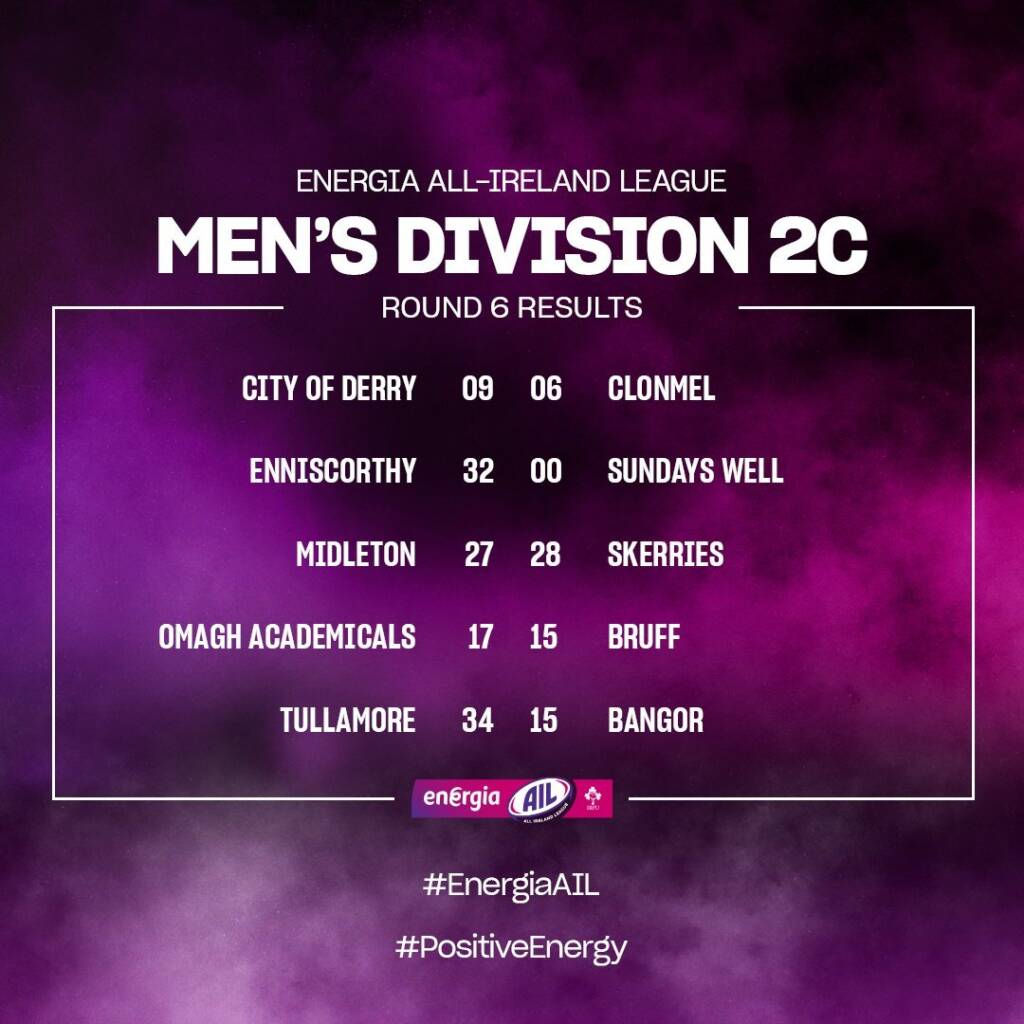 Bangor improved down the final stretch, putting a couple of chances away with Conor Lusty running onto a chip kick for the second of them.

Still, it was Tullamore who had the final say, an excellent run by debutant winger Liam Farrell saw him go close to scoring. He made sure to get the ball away for half-time replacement Ridgeway to complete his brace.

City of Derry won a titanic tussle with Clonmel, prevailing 9-6 at Judge’s Road thanks to three penalties from Aaron Deery. Alex Sheehan split the posts, either side of half-time, for the visitors’ scores.

It was Derry’s first home win of the league campaign and gives them a boost ahead of next Saturday’s trip to Midleton. The Corkmen are smarting from an agonising 28-27 defeat to Skerries.

Out-half Paul O’Loghlen’s 66th-minute penalty closed out the scoring, seeing the Goats nip ahead for the one and only time in this topsy-turvy clash at Towns Park.

Midleton were in suitably red-hot form during the first half, Shayne Anderson, Denis Broderick and Rian Hogan all touching down with out-half Stuart Lee kicking three conversions and a penalty.

That left Skerries with a huge mountain to climb at 24-8 down. Quick hands off a lineout had put captain Kevin McGrath in for their only try of the opening 40 minutes.

The table-topping Dubliners lifted the tempo again on the restart, working Evan Sherlock over for a momentum-building try. O’Loghlen converted and added a penalty to punish a Midleton offside.

The Red Devils’ advantage was cut to 24-18 before Lee replied from the tee in the 55th minute. Skerries hit back with their third try, Billy Mulcahy breaking through after good work in the build-up by O’Loghlen and Mark Oliver.

O’Loghlen converted and fired home that all-important penalty in what was a frenetic finale. Skerries had a sniff of a bonus point but had to rely on some determined defence to deny Midleton a last-gasp winner. 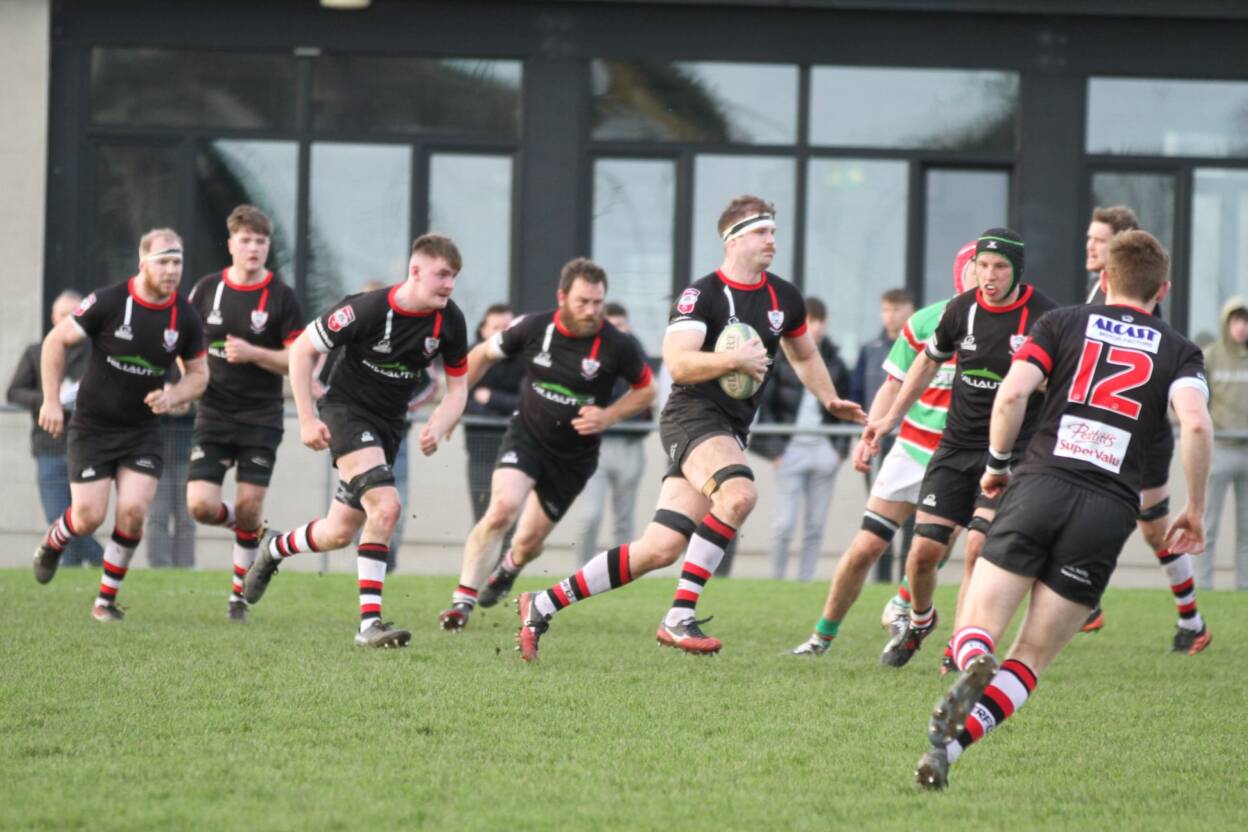 Enniscorthy are back up to second in the standings after comprehensively defeating Sunday’s Well 32-0 at Alcast Park. They ran in five tries, including one from 18-year-old debutant flanker James Doyle.

The ‘Well had their moments but were 17-0 behind by the break, with Enniscorthy winger Ivan Jacob raiding over in the corner on two occasions. Ivan Poole converted both tries and landed a penalty.

Ben Manion’s charges strung together three more tries in the second half, the first of them coming from a David O’Dwyer surge which then saw him release Ben Kidd, his back-three colleague, for the corner. 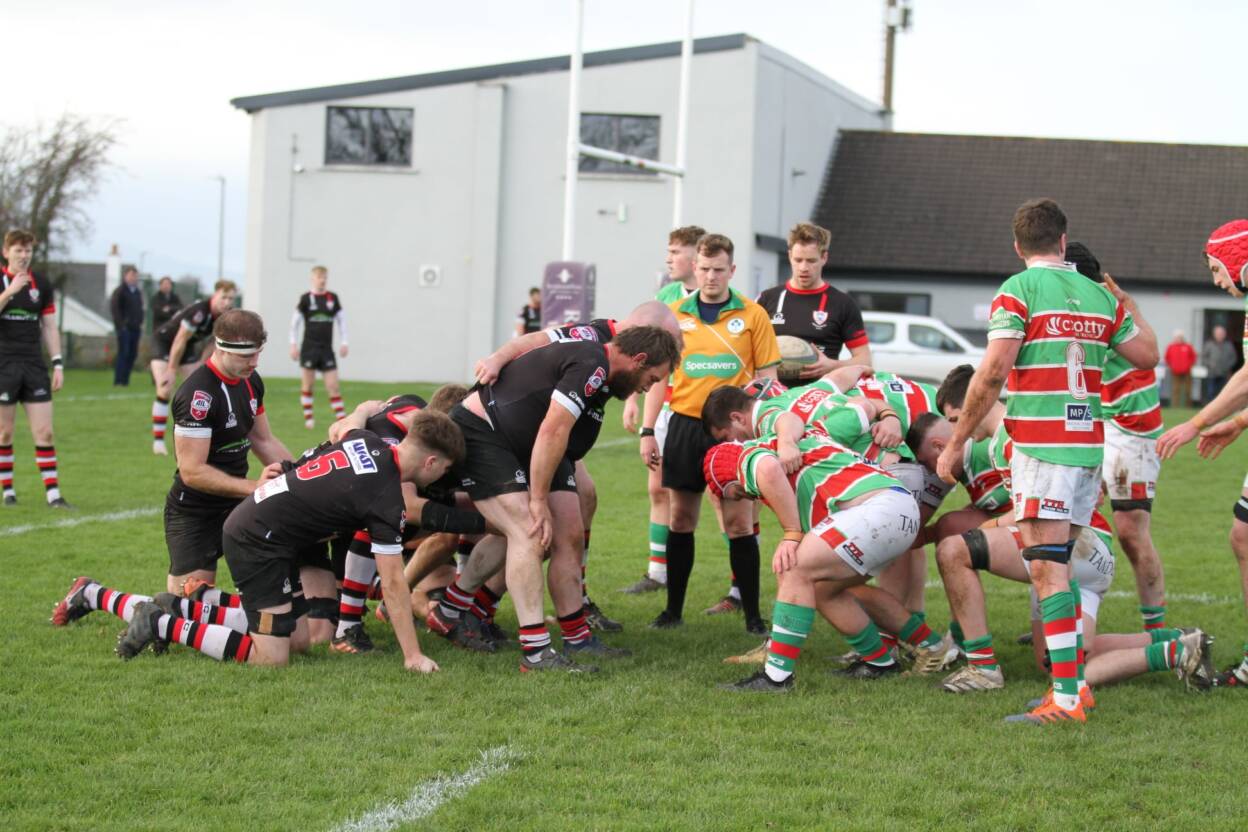 On the next occasion, with 50 minutes on the clock, it was Jacob who sped down the right wing and fed the ball back inside for the supporting Doyle to mark his first AIL appearance with a try.

Doyle then turned provider during the final quarter, getting his offload away for fellow flanker Liam Stamp to go over from close range.