Galway Corinthians showed their recent hammering of Wanderers was no flash in the pan, as they put 52 points on Dungannon. Malahide, meanwhile, broke their duck at home to Galwegians.

There was great relief at Estuary Road where Malahide lifted themselves off the foot of the table with a 33-17 bonus point success against Galwegians.

A late rally from ‘Wegians mattered little in the end as Malahide had registered their bonus point in the 58th minute. Player-coach Brendan Guilfoyle put them 26-0 clear and then followed up with an intercept try.

The Dubliners were fortunate to still be on level terms midway through the first half, as Ja Naughton’s men dominated territory early on and were left to rue a number of missed chances.

They failed to profit from a yellow card, the 14-man Mals defending heroically and all that effort was rewarded in the 25th minute when flanker David Feenan grabbed the opening try.

Out-half David O’Halloran, one of their returning players, converted and also added the extras to a subsequent score from winger Mick McGrath who muscled his way over just before half-time.

McGrath, the former Leinster and Ireland Sevens representative, was fed from a scrum, only two minutes into the second half, and dived over to make it 21-0 to Malahide.

After five defeats on the trot, Guilfoyle’s charges were finally finding some form and a well-worked move released the newly-introduced ‘Gilly’ for a try of his own.

The 37-year-old Mals boss cancelled out a ‘Wegians try with his intercept score, running in from halfway, before the Blues’ late spurt salvaged some pride but no bonus point. 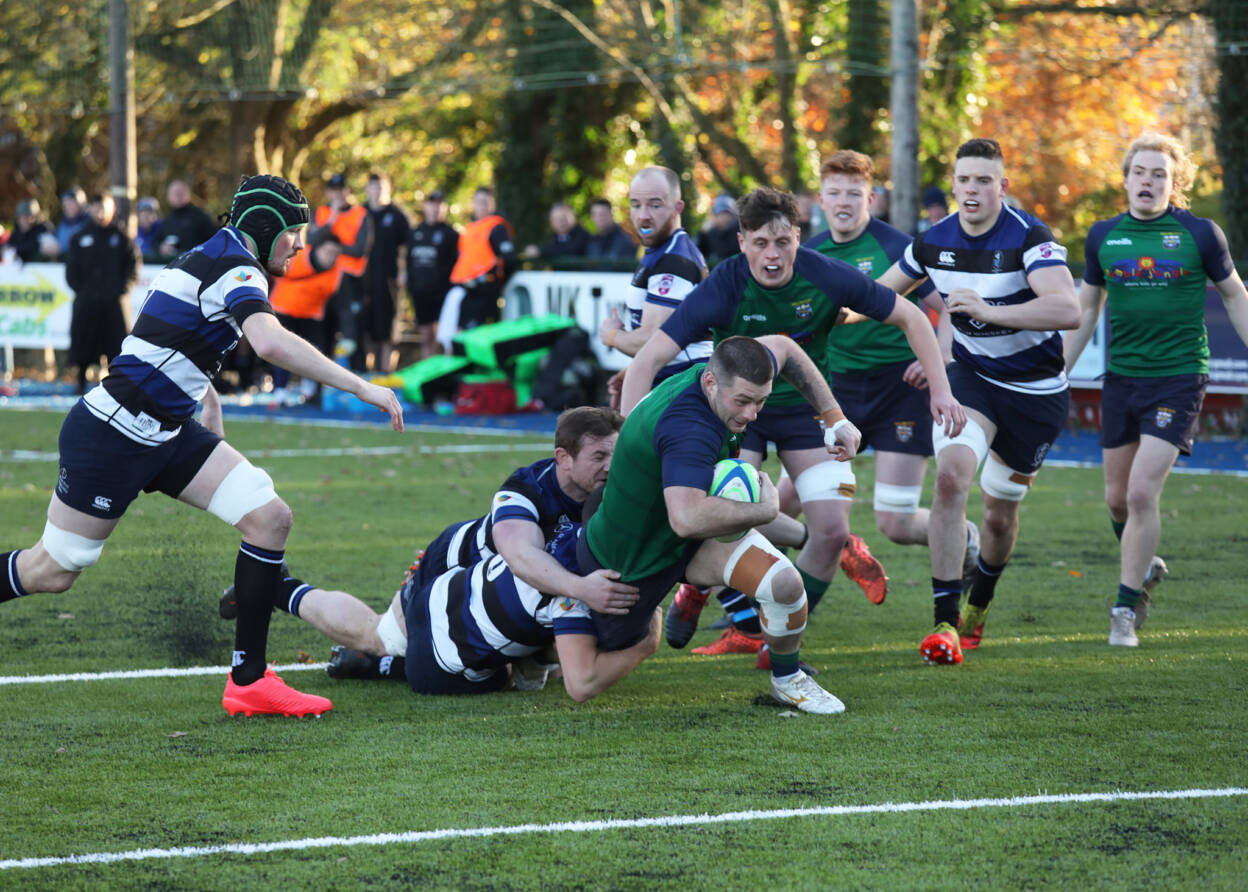 The first senior match on Heffernan Park’s new all-weather pitch was marked with ten tries, six of them to Wanderers as they spoiled Ballina’s big day by beating them 40-24.

Number 8 Patrick Howley’s third-minute try promised much for Ballina, but by the end of a breathless first half, Wanderers had foraged into a significant 30-12 lead.

Stung by their recent home defeat to Galway Corinthians, the Chaps recaptured some of their best attacking form. Lock Mark O’Reilly’s early second half try – his second of the game – effectively sealed the result.

Shane Moynihan, Niall O’Donoghue, Cian Doddy and Brian Vaughan also dotted down for Eoin Sheriff’s side, who took advantage of a Ballina yellow card for Billy McVann collapsing a maul.

The Moy men battled their way to a deserved bonus point, winger Bradley Nealon finishing with a well-taken brace of tries and centre Calum Quinn crossing for the sixth time this season. 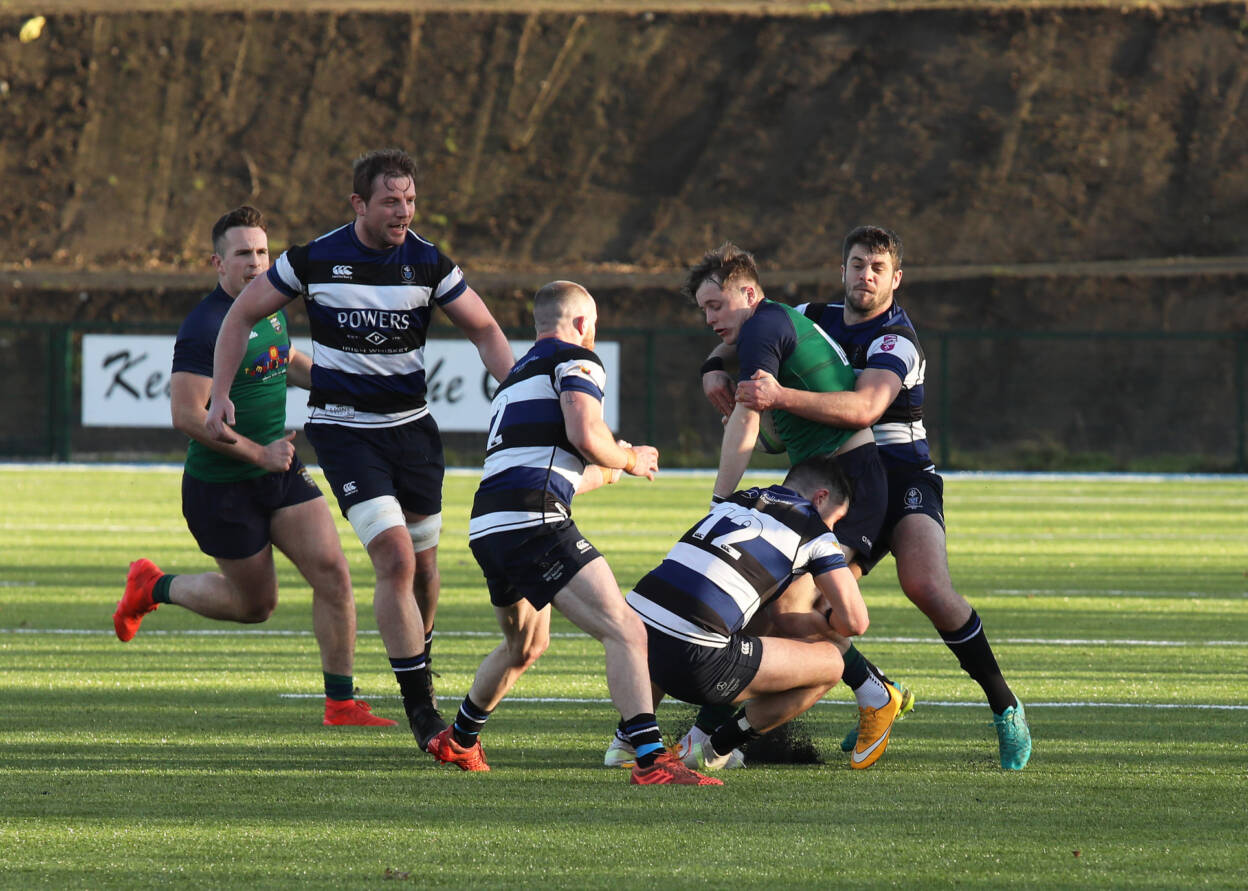 Centre Andrew Kealy threaded a kick in behind following a turnover, and McAleer reacted quickest to ground the ball. A terrific touchline conversion followed from captain Killian Marmion.

Harlequins’ game-plan had been working well for most of the match, with a focus on keeping things tight, winning the tactical kicking battle and taking their points from the tee.

Neil Doak’s men defended well in the first half, pressurising some handling errors from Greystones and keeping their line intact. James McKinney rewarded those tackles and the defensive organisation with a brace of penalties.

6-0 at the break became 9-0 as former Ulster player McKinney increased his influence, although ‘Quins did leave some points behind them during the sin bin period for Greystones full-back Mark Meyler.

The Greystones pack got on top at crucial stages, though, and that allowed Marmion to reduce the arrears to three points, following a scrum penalty and a second one on the back of some territorial pressure.

Then came the only try of the afternoon, as the home defence finally wilted and McAleer made them pay. ‘Stones finished in the ascendancy, with the result sending them nine points clear at the summit. 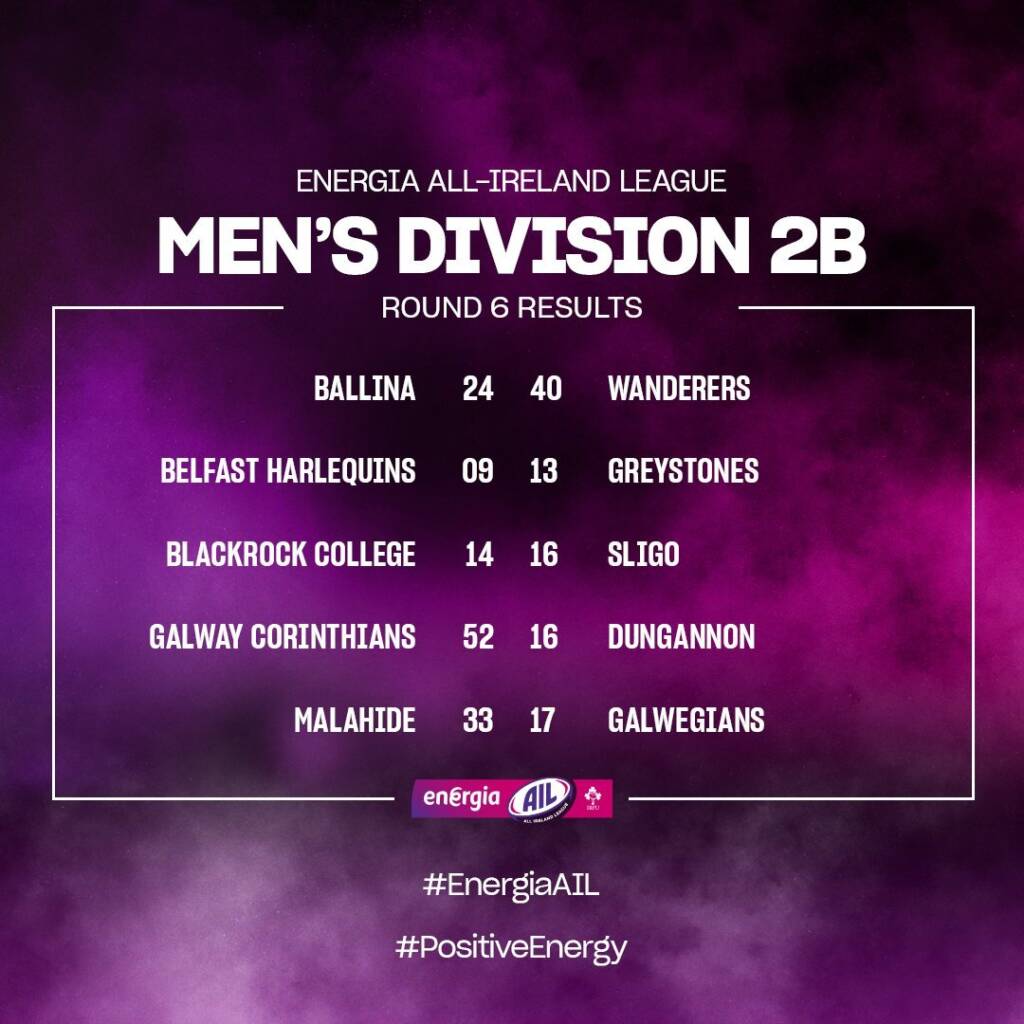 Sligo, who host Harlequins in the next round, pipped Blackrock College 16-14 at Stradbrook thanks to a coolly-struck last-minute penalty from player-coach Josh Reeves.

In wet conditions, Blackrock nudged their way into a 14-8 lead early in the second half, thanks to a penalty try and a well-taken effort in the corner from captain Brian Colclough.

Sligo had opened the scoring in the 20th minute, disrupting a Blackrock scrum and winning scrappy ball. Scrum half Hubert Gilvarry raced through and expertly sidestepped the cover to score in the corner.

Reeves added a penalty soon after, but it took a grandstand finish from the visitors to earn a battling win. Full-back Guilherme Coghetto’s excellent counter-attacking try reduced the margin to the minimum.

Reeves’ conversion struck the right hand post, leaving it 14-13 to ‘Rock, but the Brazilian international was back on target in the final seconds. He fired over from the left after Sligo’s maul had won a penalty.

Ireland Under-20 international Cathal Forde continues to impress in Galway Corinthians colours. He tallied up 22 points in their dominant display at home to Dungannon.

Adding to the 23 points he scored against Wanderers, centre Forde was instrumental in a fine 52-16 bonus point success for JP Cooney’s youngsters, who are now only three points outside of the top four.

It was seven tries to one in the end at Corinthian Park, Dungannon full-back Jordan McIlwaine converting his own second half try to add to his three earlier penalty goals.

Giving his reaction afterwards, Corinthians head coach Cooney said: “We were happy with the result. Great result to score that many tries, but I still think there’s more in us if I’m being honest.

“When you’re beating a team by that much, you can kind of take your foot off the accelerator a small bit. Whether that will be good enough when we come against more top opposition, I don’t know.

“But it’s something we can circle back (next Tuesday and Thursday) and train the lads and prep for next week. There was a lot of energy in ‘D’, we’ve been drilling it hard.

“Probably a small bit to tidy up in attack, but overall very happy. The games in the lead up to Christmas, including today, and after the break, we’re targeting these big time.”