It was a good weekend for Division 2A's Limerick clubs, Old Crescent and UL Bohemians, as they registered their second wins of the campaign ©INPHO/Evan Treacy

Apart from Queen’s 45-15 dismissal of Nenagh Ormond, 10 points was the biggest winning margin as Division 2A served up some closely-fought contests last weekend.

Four games went ahead in the third tier of the Energia Men’s All-Ireland League, with Cashel following up on their shock result against Queen’s University by taking down third-placed Ballymena.

Cashel produced another top drawer performance, crowning their first home league game of the season with a 24-14 victory. Their two previous fixtures at Spafield were cancelled due to Covid-19.

Darragh Lyons’ men had the wind at their backs in the opening half and built a 13-6 lead. Two early Steven McMahon penalties settled them into their stride.

Both team showed an eagerness to run the ball, making for a very entertaining contest. Tim Small opened Ballymena’s account from the tee in the ninth minute.

The visitors exerted further pressure but following a McMahon penalty kick to the corner, Cashel went through the phases and Brendan Crosse could not be stopped from close range. The lock’s try was converted by McMahon.

Scoring opportunities were at a premium leading up to half-time, but a second Small penalty restored the seven-point deficit on the half hour mark.

A heavy rain shower at the break made handling particularly difficult on the resumption, and Ballymena quickly capitalised on a Cashel sin-binning to close the gap to just 13-11.

Replacement Dean Millar, who had come on for the injured Rodger McBurney, was sought out with a cross-field kick and did well to finish in the corner.

However, just six minutes later, a powerful lineout drive from the edge of the 22 did the damage for the Tipperary outfit. Hooker Niall Fitzgerald crashed over to make it 18-11.

The Cashel pack had the bit between their teeth, punching holes again for McMahon to add his third penalty goal. Small replied from the hosts’ 22, within five minutes.

Cashel had the dominant scrum, but they could not translate that onto scoreboard. Another penalty from McMahon proved enough for them, with Ballymena’s late push for a losing bonus point foiled by a James Ryan turnover. 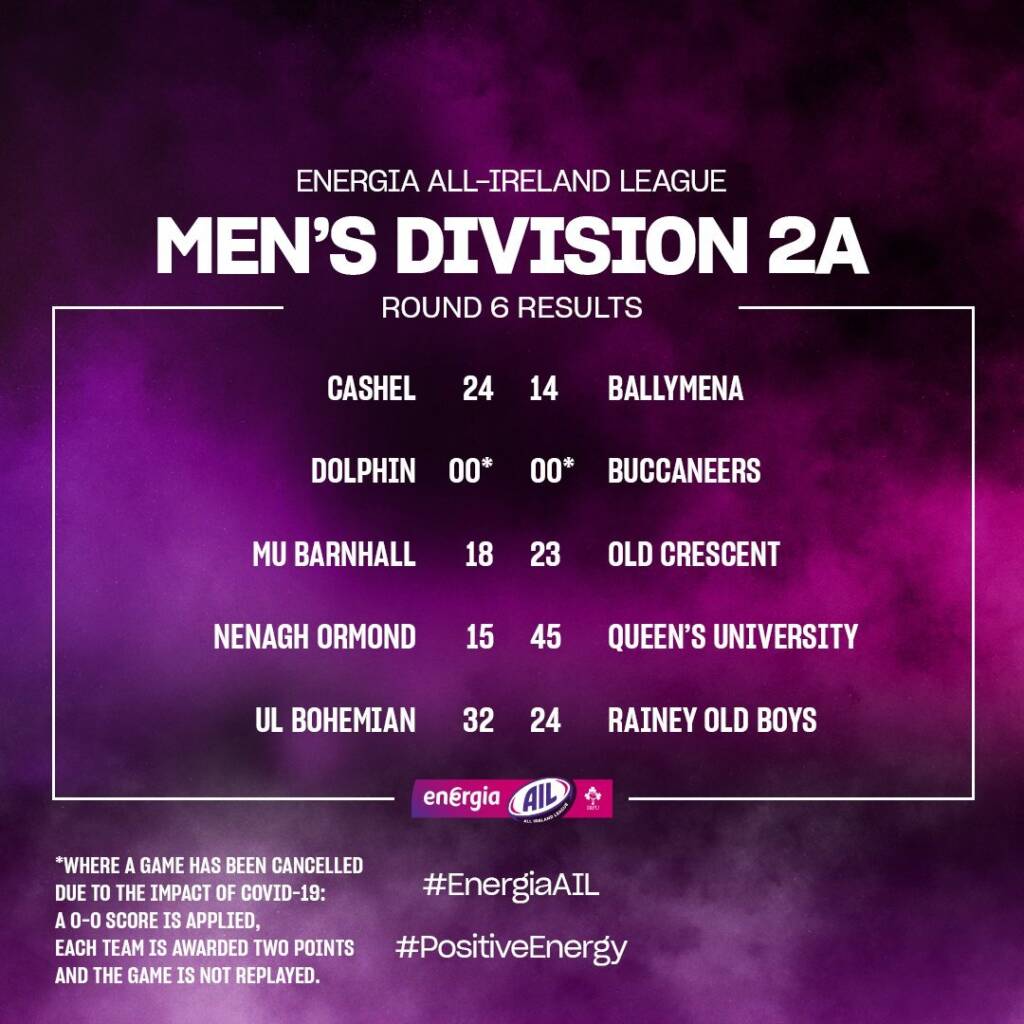 The result ended a four-match winning run for the Braidmen, whose next assignment is a home tie against Nenagh Ormond who were beaten 45-15 by table-topping Queen’s University in round six.

Despite leaking tries to Conor McMahon and Kevin O’Flaherty, Queen’s got back on track with a successful trip to Tipp for their fourth try-scoring bonus point of the campaign.

Old Crescent made it back-to-back victories, flooring hosts MU Barnhall with a last-minute try from flying winger Val McDermott. They won out 23-18 in a dramatic finish at Parsonstown.

Out-half Adam Chester shone for Barnhall during the first half, sending over a cross-field kick to set up winger Sean Sexton’s 13th-minute try. He also slotted over two penalties.

Crescent trailed 11-6 at the break, but turned the game on its head during the third quarter. Ronan McKenna’s third penalty of the afternoon was followed by a try under the posts from replacement Shane Mullally.

Barnhall edged their way back in front on the 70-minute mark, a well-directed lineout maul seeing replacement Gareth Murray touch down. Chester’s conversion split the sides at 18-16.

Nonetheless, Crescent managed to snatch the win from the jaws of defeat. McDermott’s pace took him over in the right corner, with McKenna also converting to complete his 11-point tally.

UL Bohemians climbed out of the bottom two with a 32-24 bonus point triumph over Rainey Old Boys. Out-half Harry Byrne scored a try, three conversions and two penalties for a 17-point haul.

Industrious number 8 Eoin Sweeney claimed a brace of tries for the Red Robins, who led 19-7 at the interval, with centre Joe Johnson also touching down.

Rainey, who are on the road again this week away to Buccaneers, narrowly missed out on a losing bonus point. Forwards Connor Smyth (2) and Jack Bresland were their try scorers at the UL Arena.