The four semi-finalists in the Energia All-Ireland Junior Cup will emerge this afternoon, with reigning champions Kilfeacle & District hoping to stay in contention for another national title.

Clogher Valley, who are battling with Instonians at the top of Ulster Championship Division 1, will look to make home advantage county against Dromore, the All-Ireland Junior Cup runners-up from the 2019/20 season.

This is Clogher’s first quarter-final appearance since 2016, and they were beaten finalists two years before that. They have a relatively clean bill of health, with head coach Stephen Bothwell praising Keith Todd for his influence in that area.

“Keith does a lot of work on the players’ fitness and a lot of work with their warm-ups,” he told the Tyrone Herald. “So I think it’s a testament to him that we’re keeping them as fit as we can and hopefully it stays that way.”

Two late tries from Regan Wilkinson and David Stinson saw them knock out Ashbourne in one of the results of the Junior Cup’s opening round.

Dromore had 36 points to spare against a young Suttonians side – winger Andrew Rutledge touched down twice – and they will be out for revenge against the Valley after losing 33-17 there in the league in September.

Compared to the Dromore team from the first round, Brian McClearn, Graeme McCandless and Jason Gribbon return to the back-line. Adam McDonald slots into the second row and Adam MacGregor captains the team from the back row.

Title holders Kilfeacle were given a stern test by Creggs in the opening round, but came through it thanks to player-coach Willie Staunton’s trio of penalties.

They face a return trip to Galway, this time to the picturesque setting of Monastery Field in Clifden.

Connemara provide the opposition this afternoon, in a repeat of the sides’ 2017 quarter-final. Kilfeacle edged a titanic tussle, 12-10, back then with James Hogan notching the match-winning try.

Henry O’Toole’s well-drilled Blacks squad are always a tough nut to crack on home soil, and they are looking for another Munster scalp after beating Thomond 15-13 in Limerick.

Connemara have been involved in some tight tussles of late, edging out Connacht Junior League leaders Buccaneers 2nds, 16-14, at home but losing 28-27 to Creggs in the Cawley Cup. 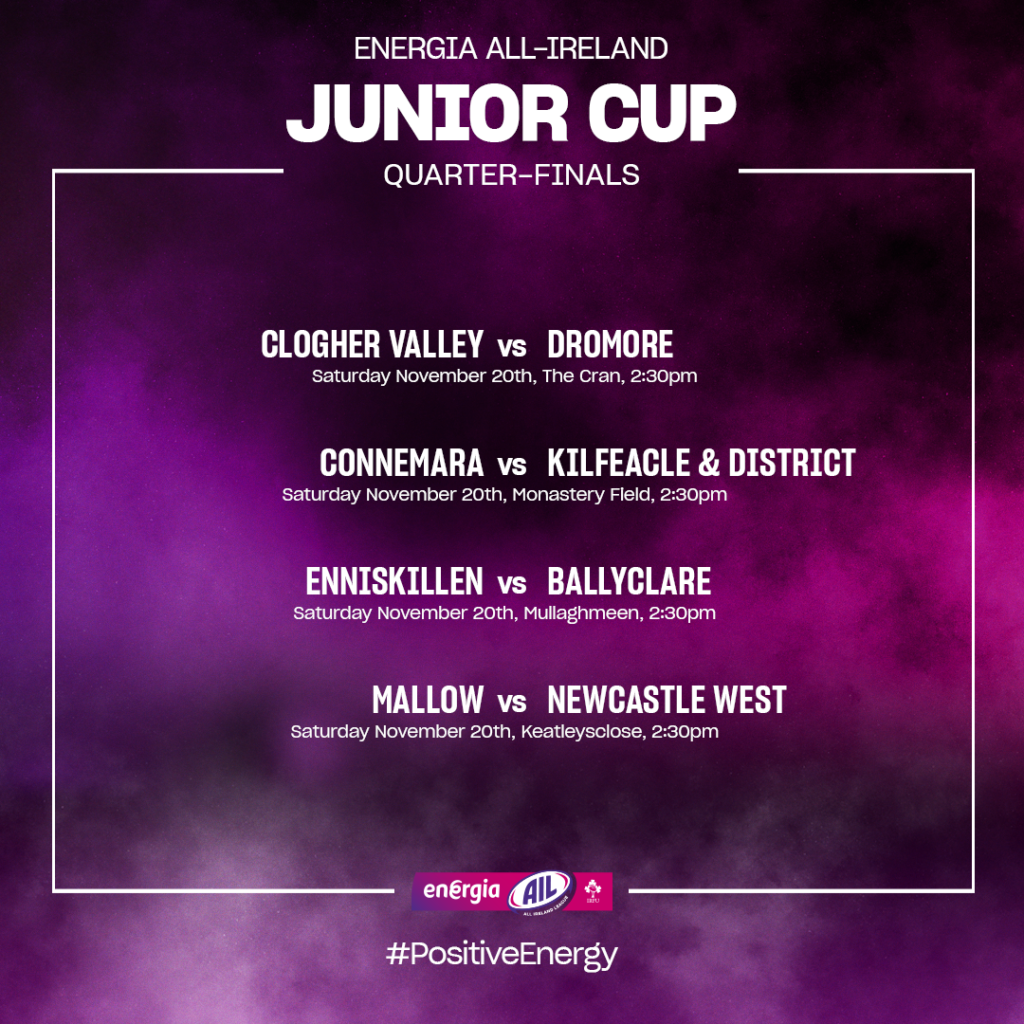 Following the Ulster clubs’ clean sweep in the first round, the second of the all-northern clashes sees Enniskillen hosting Ballyclare. These sides met in the league three weeks ago, with Ballyclare triumphing 38-12.

Today’s rematch should be a much closer contest, particularly with Stephen Welsh’s Skins, who are captained by stalwart prop Gavin Warrington, have the home support behind them.

Enniskillen put 20 unanswered points on Seapoint in the first round of the All-Ireland junior Cup, with Welsh telling the Fermanagh Herald: “It will come down to fine margins but we are confident that if we go out and play as we can play, the result should look after itself.

“There is definitely a good buzz about the camp since we beat Seapoint in the first round. When things were building, we always had this in the back of our minds.

“We have been on the road for the best part of a month and a half, so it is good to have a game at home again. The place is definitely getting excited about it.”

Influential scrum half Matthew Dane is sidelined for Enniskillen with concussion. He unfortunately misses their second ever quarter-final appearance, following on their 2017 loss to Newcastle West.

Ballyclare had a star turn from Owen Kirk in the first round last month, the winger weighing in with a hat-trick of tries against Gorey.

They are hoping their luck changes after three quarter-final defeats in the Junior Cup between 2016 and 2019.

There are three changes to the Ballyclare team that beat Enniskillen on Halloween weekend, as prop Harry Mawhinney, winger Martin and centre Robbie Reid are all handed starts.

Munster rivals Mallow and Newcastle West go head-to-head in another juicy quarter-final tie in north Cork. Mallow operate a division below today’s opponents, in Conference B of the Munster Junior League.

Mallow’s first All-Ireland Junior Cup game since 2007 ended in a 56-5 hammering of Westport, with hooker Stephen Hayes helping himself to a hat-trick of tries.

Ger Earls’ NCW outfit, who are currently joint-top of Munster’s Conference A with Kilfeacle and Richmond, make the trip to Leeside after winning 24-6 at Tuam in the round of 16.

Ace place-kicker Charlie O’Doherty contributed 14 points in that first round game, and the Limerick men were 11-7 winners when they last faced Mallow in league action.