Kilfeacle scrum half Gavin Heuston gets his kick away, under pressure from Creggs' Ciaran Corcoran ©Bernie O'Farrell

Kilfeacle & District revelled in the drama of it as player-coach Willie Staunton coolly kicked them past Creggs and into the quarter-finals of the Energia All-Ireland Junior Cup.

– The draw for the quarter-final matches, which take place on Saturday, November 20, will be held in due course

It was a successful start to Kilfeacle’s title defence, but they needed Staunton’s haul of three penalties – two in the closing stages – to steer them past Creggs in a hard-fought 9-8 win.

Kevin Gavin’s seventh-minute score for the Galway men proved to be the game’s only try. Creggs were close on two more occasions, knocking on five metres out and also being held up. 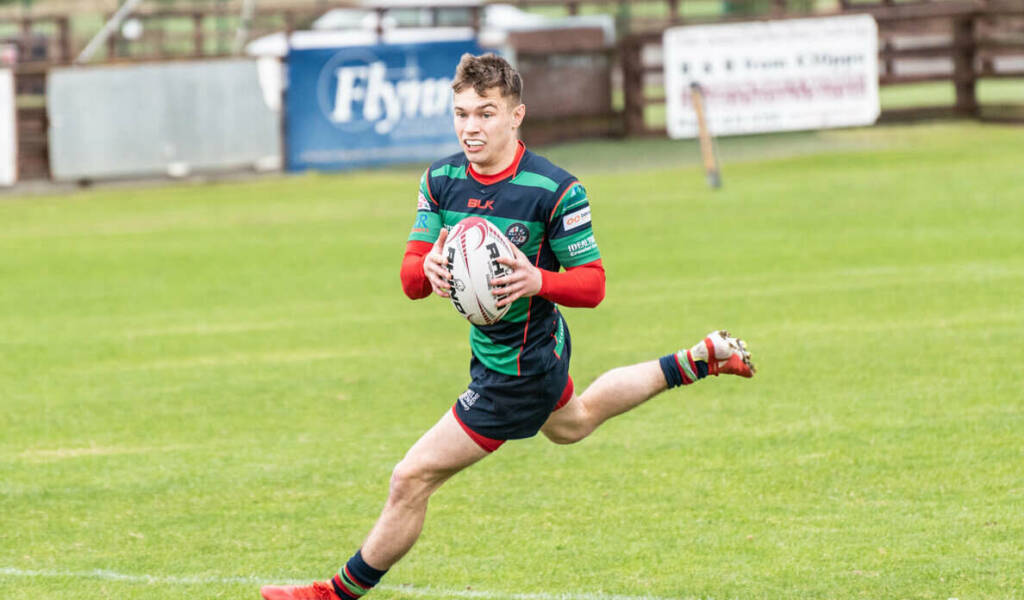 Three-time champions Ashbourne were knocked out by Clogher Valley, losing 29-19 in a rare home defeat. It was their first loss in nine Junior Cup matches at Milltown Road since 2016.

With their powerful pack impressing in the lineout, Ashbourne were the early aggressors. From a tapped penalty and then a rolling maul, Jake Wall’s early try had the hosts seven points up.

More good work by the Ashbourne forwards yielded a second try in the left corner, yet the Valley responded in timely fashion just before half-time, closing the gap to 12-7.

The visitors’ well-oiled scrum got on top and won a series of penalties, forcing a late penalty try, and they made an explosive start to the second half with Armstrong touching down out wide.

Number 8 Callum Smyton made the initial incision with a barnstorming carry through heavy traffic. Matthew Bothwell then put boot to ball and the in-form Armstrong gathered to score and then swing over a brilliant conversion. 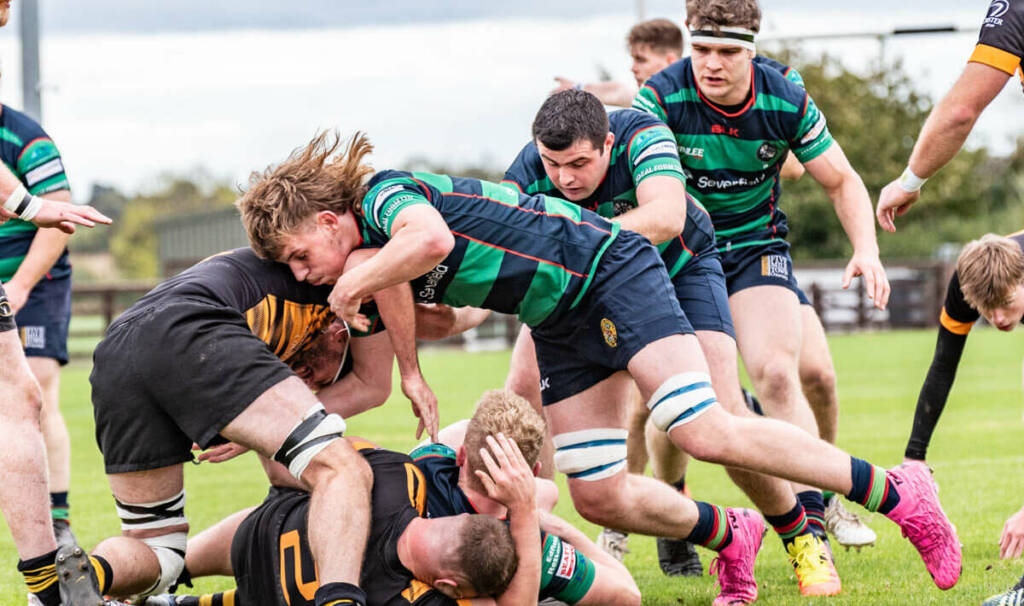 Clogher tightened up their defence to prevent an Ashbourne response, and their reward was a well-taken 70-metre intercept score from David Maxwell, which went unconverted.

The Meath men’s impressive ball retention built pressure again in and around the 22. Referee Tomas O’Sullivan lost patience with Clogher’s infringing and sin-binned Bothwell and Smyton in quick succession.

The numerical advantage produced a levelling try for Ashbourne, but they could not add to it with Armstrong proving a talismanic figure again for Clogher with a try-saving tackle.

Thoughts were turning to extra-time at 19-all, yet Clogher had other ideas. They opted for scrums from penalties in Ashbourne territory, and a blindside attack had Regan Wilkinson scorching over to make it 24-19.

The Fivemiletown outfit quickly got back on the attack, Armstrong pressurising Ashbourne into a handling error. He flipped the ball to Robbie Mills whose inventive overhead pass sent David Stinson galloping over for the clinching try.

Indeed, it was a day to remember for the four Ulster clubs as they all defeated their Leinster opponents, including two former Junior Cup winners in Ashbourne and Seapoint. 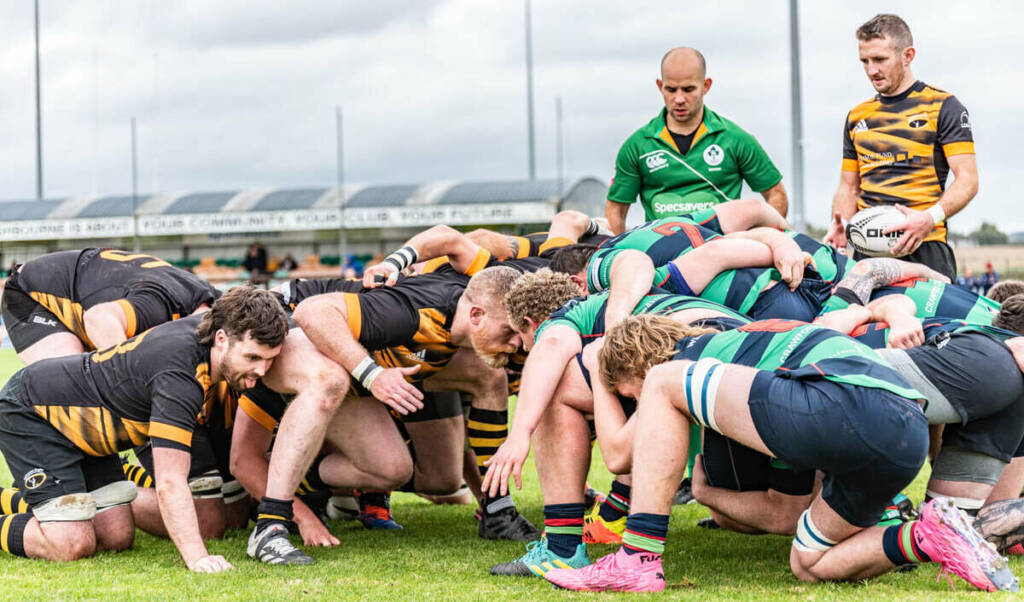 Gorey went down 41-17 at Ballyclare where impressive winger Owen Kirk ran in a hat-trick of tries for the Co. Antrim side, who also had touchdowns from Mark Jackson, Aaron Playfair and Scott Martin.

Despite playing into the wind, the hosts broke into an early 14-0 lead with Kirk and Jackson both dotting down. Kirk showed a clean pair of heels to the Gorey defence to speed over in the fifth minute.

Towards the end of the opening quarter, Ballyclare’s back-line found gaps in the defence again. Good passing released Jackson who rounded the final defender to finish off a fluent move wide on the right.

Jackson’s second conversion was a brilliant strike into the elements. That was followed by Gorey’s opening points, a scrum penalty allowing out-half Cian Hadden to split the posts.

A third try for Ballyclare proved elusive until all-action openside Playfair hit the line at pace, combining with his back row colleague Jack Gamble to run in under the posts. With Jackson converting, it was 21-3 at half-time.

The teams swapped tries at the start of the second period, but the Wexford men could only get the deficit down to 16 points. Number 8 Gamble increased his influence for a try-hungry Ballyclare.

Breaking from a scrum inside his own half, Gamble got in behind a flat Gorey back-line and fed the supporting Martin to finish off the attack.

Tenacious Gorey hit back with their second try, but a Jackson penalty from in front of the posts and Kirk’s hat-trick score – a searing run from his own half – wrapped up the scoring. 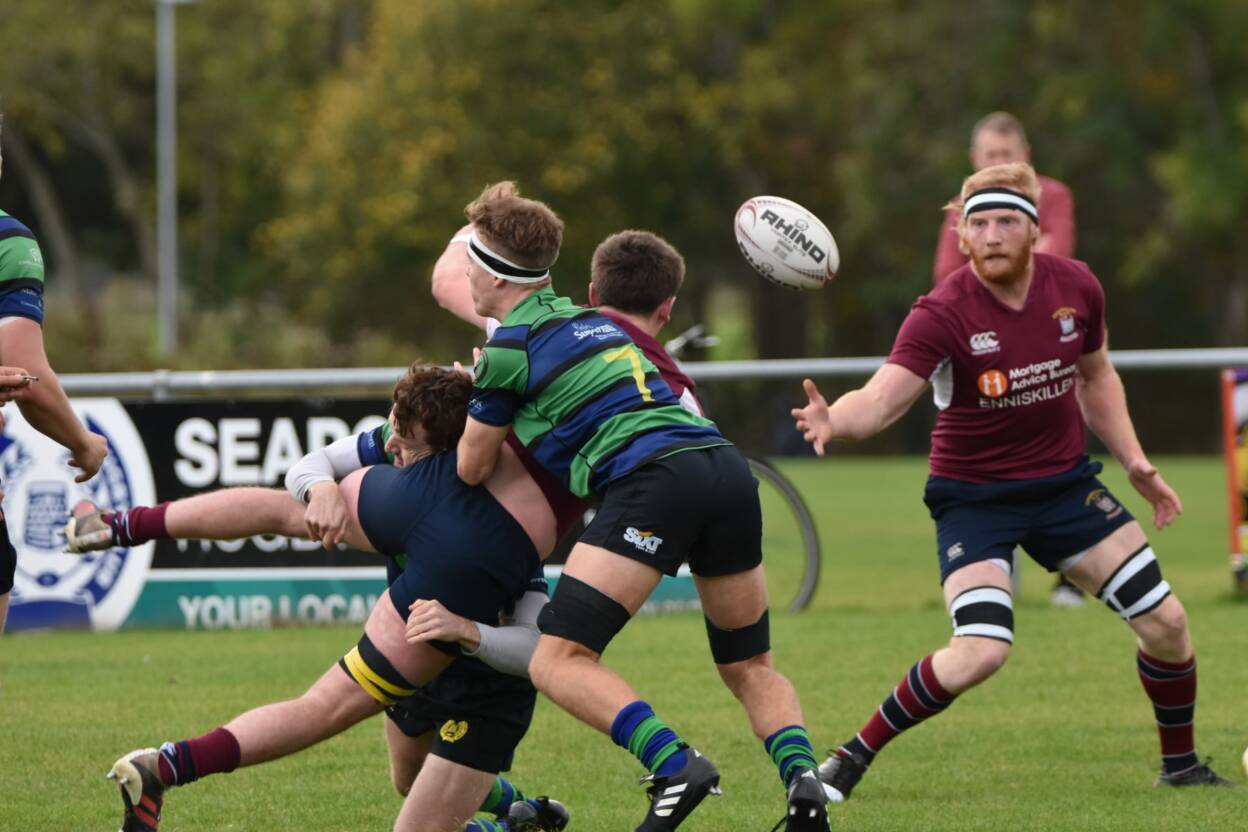 Dromore and Enniskillen made it a clean sweep of Ulster victories, with Skins, on their first ever away trip in the competition, running out 20-0 winners at Seapoint.

Mark O’Shea got the player-of-the-match nod from the right wing, scoring a try with Neil Rutledge and George Foster also crossing the whitewash. Enniskillen led 12-0 at the interval and played the windy conditions to perfection. 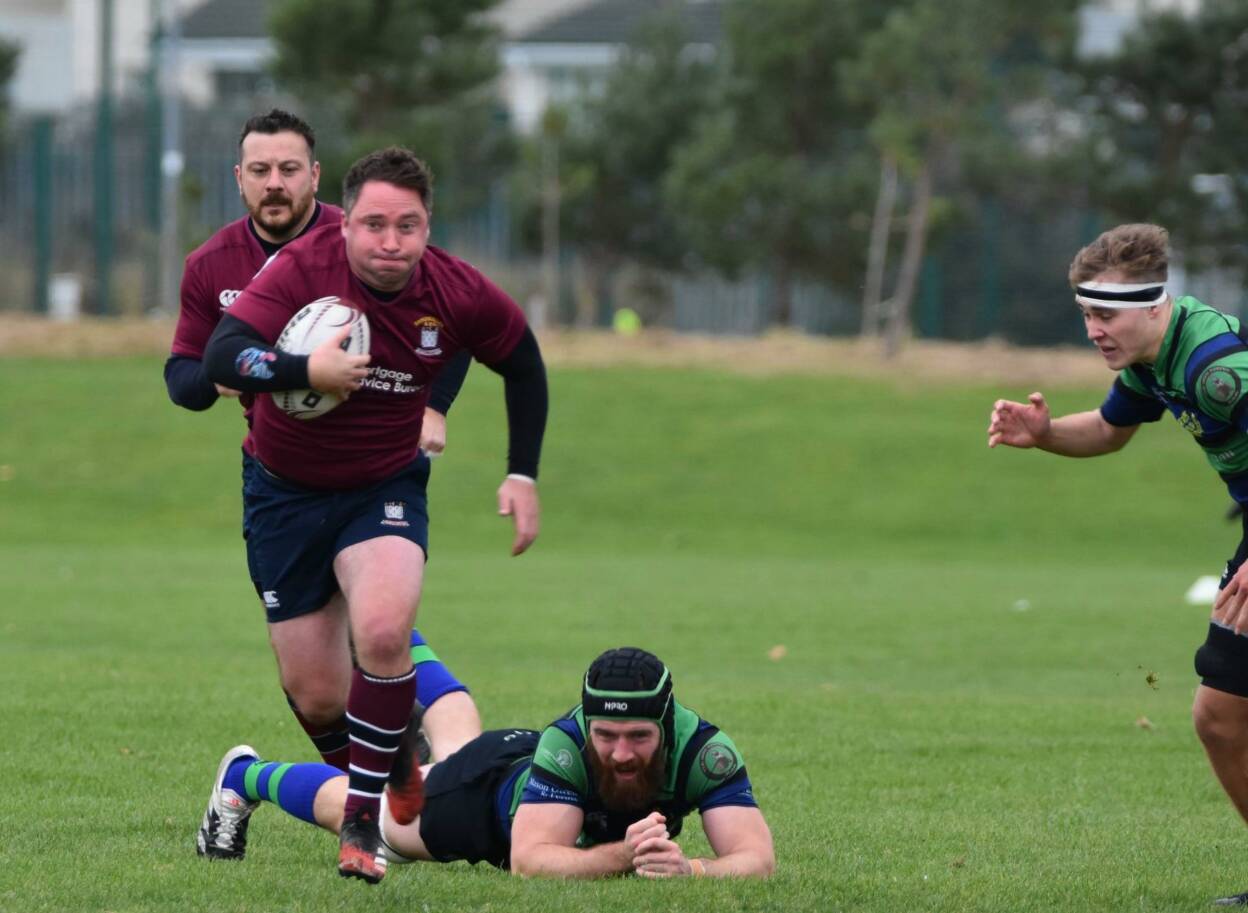 A final quarter surge sent Dromore through with plenty to spare, winning 36-0 at home to a youthful Suttonians team. Winger Andrew Rutledge’s sixth-minute try sent them on their way to a 10-0 half-time lead.

Sutts were still in contention until just past the hour mark when the floodgates opened up. Replacements Adam McDonald and Adam McDonald junior both crossed, sandwiching Rutledge’s second score.

Influential out-half TJ Morris provided the cherry on top at Barban Hill with a closing 80th-minute try. He finished with 13 points, including four conversions.

Meanwhile, Newcastle West advanced to the last-eight thanks to a well-judged 24-6 triumph over an injury-hit Tuam at a wet and windy Garraun Park.

Tries from Michael Bourke and Jason Woulfe inspired a run of 18 unanswered second half points from the visitors. Versatile back Charlie O’Doherty kicked 14 points.

Tuam’s fairytale return to the Junior Cup was going well at half-time, with the sides level on six points apiece. Killian McDonagh fired home an early penalty, on the back of a brilliant 50:22 kick from Eoin Cosgrove. 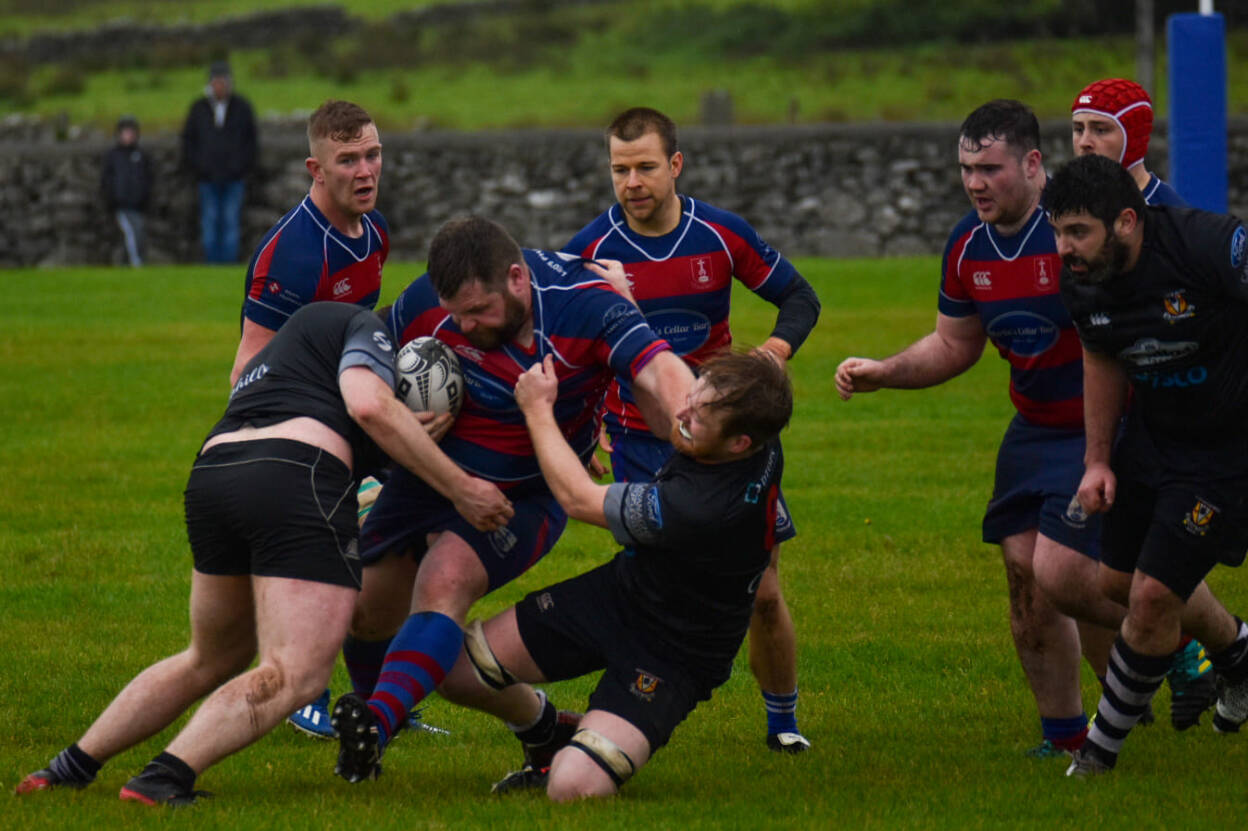 McDonagh and O’Doherty had two successful place-kicks each by the time the second half got underway. Things grew more difficult for the Galway outfit, who now faced into a wind that was picking up and the rain was getting heavier.

A long-range O’Doherty penalty pushed Newcastle West ahead for the first time, before they wore down the Tuam defence, leading to Bourke’s 53rd-minute try.

Already with a dozen players on their injury list, Tuam unfortunately lost Owen Halion to a head injury he sustained in trying to prevent the try.

Coached by Keith Earls’ father Ger, Newcastle West made it a quick-fire double when Woulfe, a former underage captain, crashed over. O’Doherty converted and also tagged on a late penalty to seal a 14-point winning margin. 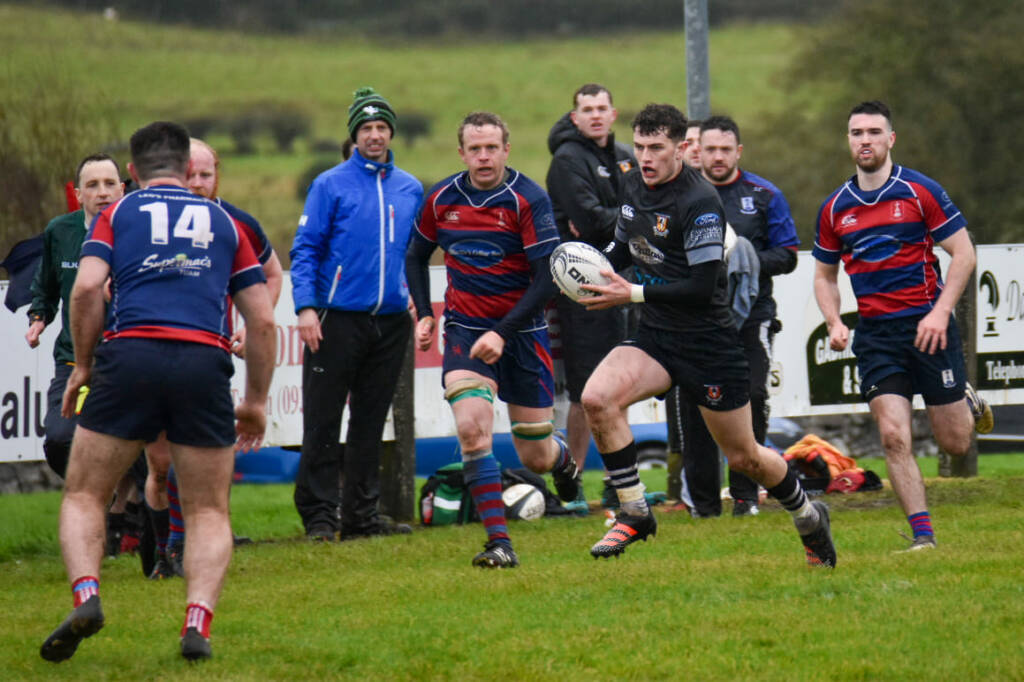 Stephen Hayes led the way with a hat-trick of tries in Mallow’s thumping 56-5 victory over Westport, with Kenneth Mills, Sean Glynn, Eoghan Barry, Dan Lucey and David Breen taking their try tally to eight in the end.

Connemara will be the lone Connacht club in the quarter-final draw after pipping Thomond 15-13 in a closely-fought battle at Liam Fitzgerald Park.

Henry O’Toole’s Blacks did all of their scoring in the first half, Marty Conneely finishing of a breakaway try and Henry O’Toole junior squeezed in a well-worked second try just before half-time.

A Darragh O’Neill try from an Adam Guerin grubber kick had Thomond just 15-7 behind, raising hopes that they could reel in their Clifden-based opponents.

The Soda Cakes had the wind advantage in the second half, but despite two Guerin penalties, their attack suffered due to the injury-enforced departure of influential winger O’Neill.