Ballymena and MU Barnhall, who met last time out, both face Munster opposition in Division 2A this weekend ©Ryan Crooks/Ballymena RFC

All ten clubs in Division 2A now have at least one win on the board. The top three are all on the road this weekend, with leaders Queen’s University looking to bounce back from their loss to Cashel.

Having claimed the scalp of Queen’s University last time out, Darragh Lyons’ Cashel return home in buoyant mood. It was a huge result for the Tipperary men, especially given their two Covid-19 cancelled fixtures.

Steve McMahon starred from full-back with a dozen points, while the Ryan twins, try scorer Brendan and Ciaran, are pushing for starts after two impressive cameos in Belfast.

Third-placed Ballymena have been a model of consistency of late, registering four straight wins. Ulster Academy hooker James McCormick has weighed in with six tries, with experienced full-back Rodger McBurney scoring three in as many games.

The week’s break will hopefully have given Dolphin time to resolve their defensive issues. Leaking 119 points in the last three rounds has seen Brian Scott’s men slide down to sixth place in the table.

Buccaneers, meanwhile, have been going in the opposite direction. Their impressive recent form has them joint-top of the table, with young out-half Michael Hanley (30 points) leading an exciting back-line.

Tabo Maree and Rory O’Connor remain as injury doubts for the Pirates, who won 27-24 when they visited Dolphin two years ago. Another high-scoring duel is expected on the all-weather pitch. 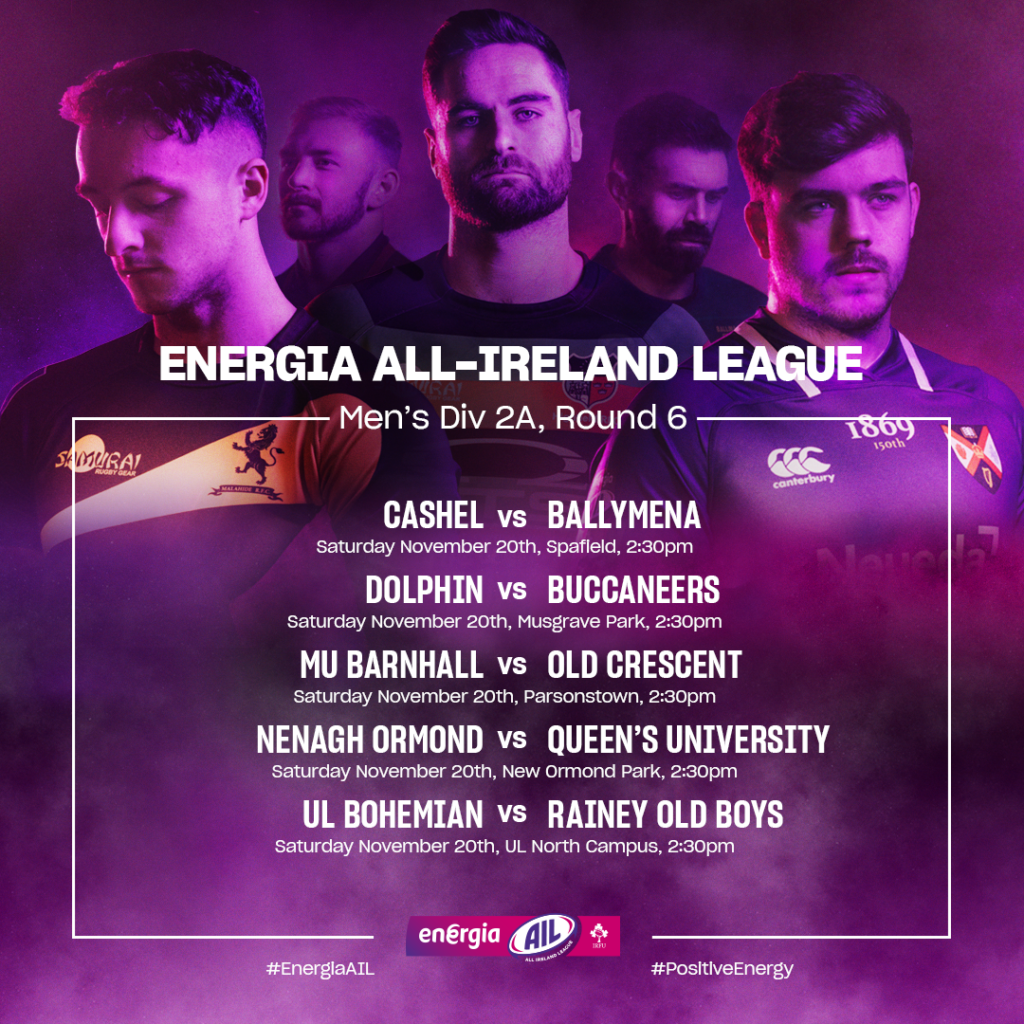 MU Barnhall have five points to make up on the leading three clubs after suffering back-to-back defeats. Despite those losses, they remain one of the division’s highest scorers, averaging 30 points per game.

Wingers Conor Lacey and Sean Sexton have notched four tries each for the Blue Bulls, who face an Old Crescent team that got back on track last time out with a 33-12 victory over Dolphin.

Crescent have three Munster derbies hot on the heels of this match, so they are entering a crucial stage of their season. Out-half Ronan McKenna remains a talismanic figure, kicking 41 points to date.

14 points and eight places separate these sides in the table, but Cashel showed their Tipperary rivals the way by shocking Queen’s into submission a fortnight ago. Nenagh Ormond will need a full 80-minute performance to repeat that feat.

This is the second of three successive clashes with Ulster opposition for Nenagh, who lost 24-12 to Rainey Old Boys in round five. They ran Queen’s close in Belfast in late 2019, losing by eight points.

The return fixture finished in a 24-8 victory for the students, who had a number of players on Ulster ‘A’ duty last week, including versatile back Michael Orr, the division’s Rising Star award winner in 2019/20.

Tomorrow afternoon they host a Rainey team who returned to winning ways with a three-try display against Nenagh Ormond. Rainey’s director of rugby Brian Smyth acknowledged it was ‘an excellent victory’.

“We’re looking forward to our trip to UL Bohs,” said Smyth. “The rest week gave our guys a bit more time to recover after a very physical game against Nenagh, but confidence is high.”