There are crunch encounters at both ends of Division 2B this Saturday, as leaders Greystones visit second-placed Belfast Harlequins, and the bottom two, Malahide and Galwegians, collide at Estuary Road.

JP Walsh’s Ballina continue to chase an elusive first league win, their recent stalemate with Sligo again showing their ability to live with teams in the top half of the table but not get a result.

To break their duck tomorrow would be timely as the Moy men make history in playing their first senior game on the club’s new 3G pitch. They lost 25-14 when they hosted Wanderers two years ago.

A backlash is expected from the Chaps who disappointed last time out, going down 41-3 at home to Galway Corinthians. Coaches Eoin Sheriff and Tommy Ellard should have them primed for a much-improved performance.

An acid test of Belfast Harlequins’ revived form under Neil Doak, as they entertain a front-running Greystones side that has already broken the 200-point barrier after just five rounds of action.

Narrow victories have gotten Harlequins where they are, but they will have to show increased firepower and a steely defence to upset ‘Stones whose goal-kicking captain Killian Marmion has amassed 79 points.

The spotlight will fall on Marmion and ‘Quins sharpshooter Paul Kerr if it is a close game, and the battle for supremacy up front should see key contributions from Joal Dundas, Daryl Marshall, Ntuthuku Mthembu and Danny Kenny. 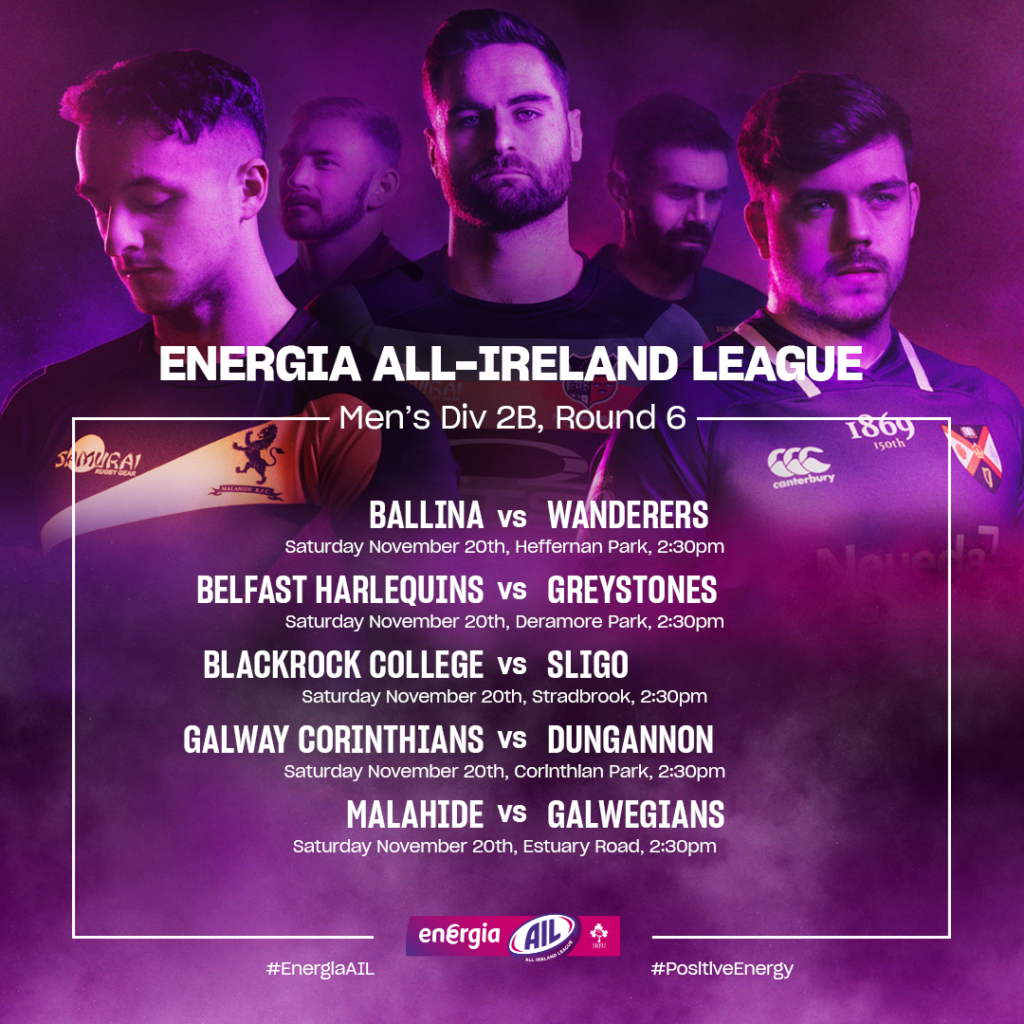 A mid-table duel and Blackrock College are looking to make home advantage count, after losing to the top two clubs back-to-back. Defensive lapses cost them during games in which they scored a combined 49 points.

Converting more of their chances is top of Sligo’s agenda, as they have the third lowest points-for haul so far. Blackrock’s record against Connacht clubs so far this season is two wins and a draw.

Galway Corinthians had their strongest line-up out in round five, and it showed as they surged past Wanderers on a 41-3 scoreline. Connacht Academy ace Cathal Forde starred from centre with 23 points.

The availability of provincial players such as Forde and Dylan Tierney-Martin could be crucial in JP Cooney’s men mounting a challenge for promotion. Dungannon, their visitors tomorrow, are four places and six points better off.

‘Gannon are gunning for their first away victory of the campaign, after losing at Greystones and Wanderers. Captain and full-back Andrew McGregor has starred so far behind a strong set of forwards.

Winning this basement battle would give Malahide a huge lift. They have three or four players due to come back into the side for this next block of league fixtures, so that should lift their performances.

It is a slow burner for Mals player-coach Brendan Guilfoyle, who has given AIL debuts to 18 local players during the first five rounds. He remains hopeful of getting their season back on track.

Ja Naughton’s Galwegians will fancy their chances at Estuary Road, especially after running second-placed Harlequins so close in a 16-14 reversal. Second row Ben McGuinness is chasing his third try in as many matches.