Something will have to give at Woodleigh Park where Highfield and Old Wesley, with five wins each so far, meet in a mouth-watering Division 1B top of the table clash.

Preview: Highfield welcome back out-half James Taylor from injury for this eagerly-awaited first-versus-second encounter. There are four personnel changes to the team that won 24-20 at Old Belvedere.

Luke Kingston replaces Sam Burns at full-back, while Travis Coomey and Ian McCarthy both get the nod to start in the front row. Highfield and Old Wesley are level on 22 points, with five wins and two bonus points each.

Wesley got one over the Corkmen in late 2019, winning 25-22 at home, but lost the return fixture 26-13. Their back row of Will Fay, Alastair Hoban and Reuben Pim was very effective against Malone last time out, particularly in defence.

Preview: There is an Ulster flavour to both selections for this provincial derby, Aaron Sexton and Lewis Finlay bookending the Malone back-line and David O’Connor lining out at blindside flanker for Banbridge.

Malone have sadly lost Josh Pentland to retirement, the centre recovering from a spinal injury but opting to hang up his boots. Head coach Wilbur Leacock said he was ‘a key member of the squad’ and ‘an outstanding young man’.

Hoping his side can end their losing streak, Bann boss Mark McDowell said: “We’re working hard in training, ironing out those little glitches that are costing us. I remain confident that we will soon embark on a run of wins to lift us off the bottom.” 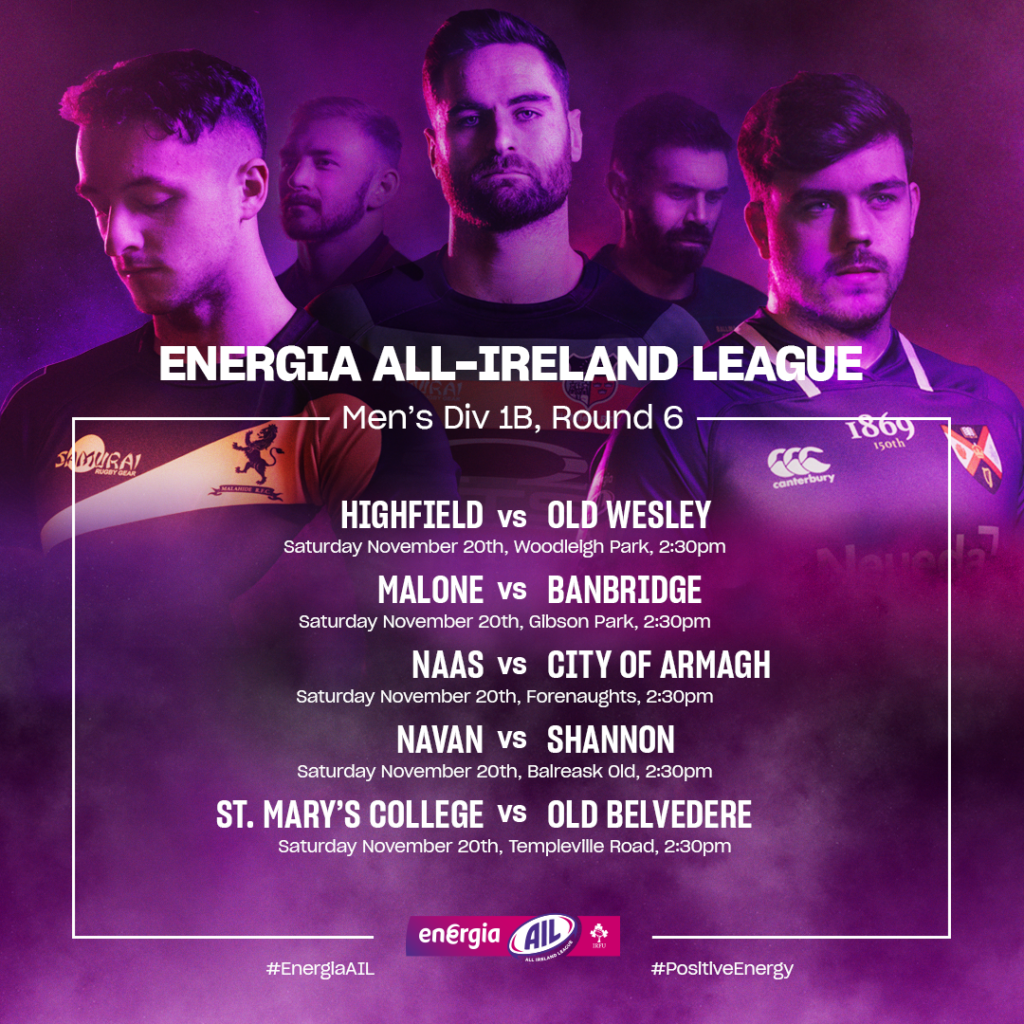 Preview: Naas and City of Armagh met twice in 2019, playing out a 23-all draw at Forenaughts before the Ulstermen prevailed 13-6 at home the following October. So expect another tight margin in this latest rematch.

The division’s two highest scorers feature tomorrow, with Naas captain Peter Osborne, who converted all four of their tries at Banbridge, tallying up 55 points so far. Armagh’s Kyle Faloon is just three behind him.

Armagh head coach Chris Parker commented: “We used the free week to refocus on our next series of matches in the run up to the Christmas break. We need to be more composed in the opposition 22 and convert our chances into points.”

Preview: Old Belvedere make three personnel changes for this Dublin derby, Jack Keating adding his pace to the back-three and there are starts up front for Fionn McWey and Jack Breen. Paddy Dowling switches to the blindside.

St. Mary’s College are on a roll, even absorbing an injury crisis in the lead up to their 21-17 victory at Shannon. Dan Lyons stepped into the breach, switching from the back row to loosehead prop.

Lyons’ forward colleague, Mick McCormack, is gaining a reputation for his scrummaging and played for Leinster ‘A’ last week. Mary’s centres Myles Carey and Mick O’Gara are also catching the eye, scoring a combined four tries in the last two rounds.