The basement battle between Ballynahinch and UCC is a key fixture this weekend as the top flight of the Energia Men’s All-Ireland League resumes.

Frank Kavanagh and promising young tighthead JJ Hession are brought into the front row and Peter Hastie starts at out-half, as the headquarters club look to build on their recent 22-5 victory at Clontarf.

Dublin University make the short trip with a strong side, bolstered by the availability of Leinster’s Joe McCarthy, Thomas Clarkson and Jack Dunne. Aran Egan fills in for captain Mick O’Kennedy at out-half.

Preview: University opponents again for Ballynahinch as they resume their league campaign a fortnight on from a chastening 42-17 defeat at UCD. Their South African full-back Shane Ball got off the mark with a try.

‘Hinch’s second half showing in Belfield did at least give them some momentum to bring forward into round six. They will have taken note of UCC’s impressive display against high-flying Young Munster.

The Cork students were held try-less but tested the Cookies throughout. They will hope for an improved performance from their scrum tomorrow, along with more opportunities for speedster Matthew Bowen who has four tries to his name. 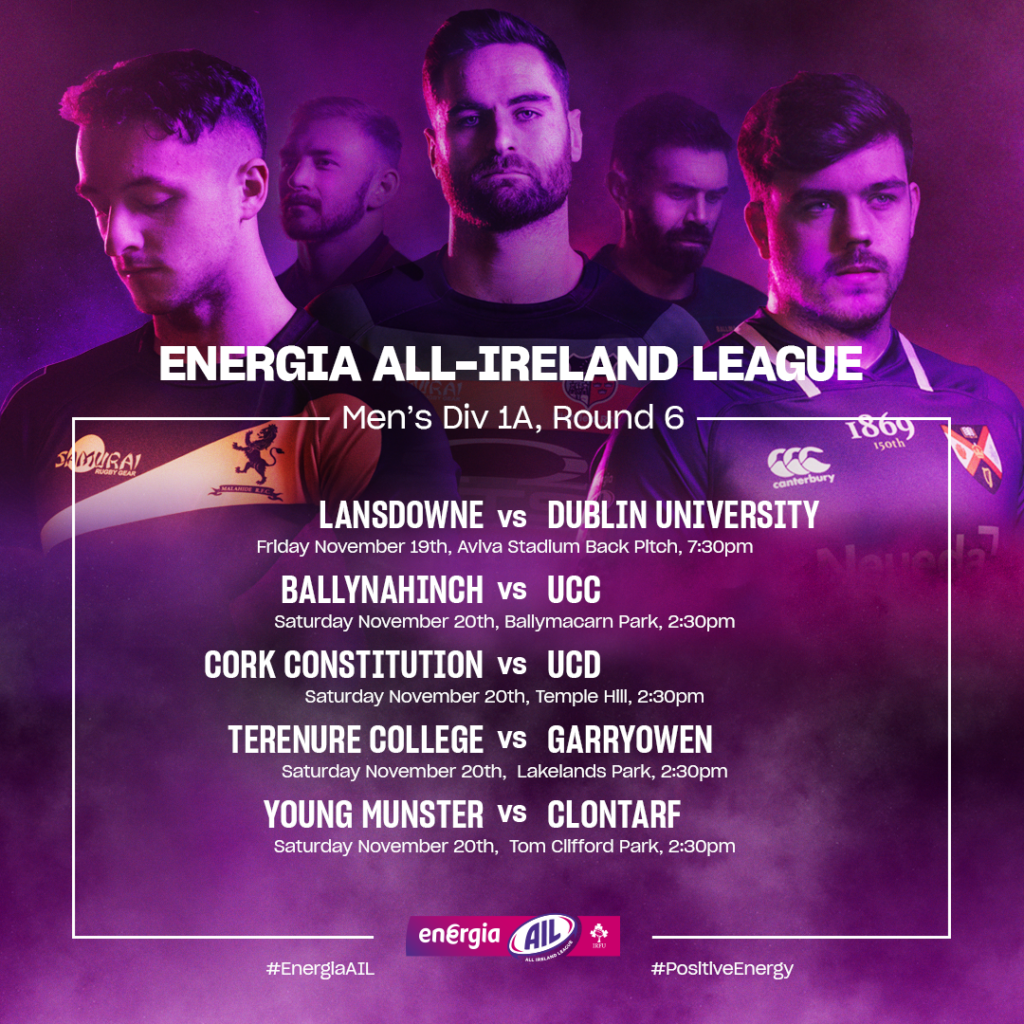 Preview: The last three league encounters between these clubs have produced a famous 27-20 win for UCD in Temple Hill, a big 53-10 backlash from Cork Constitution, and then a four-point cliffhanger in Con’s favour.

The Leesiders’ takedown of Garryowen last time out suggests they are back on track, pushing themselves back towards the top four. UCD are just two points behind them, following back-to-back home wins.

The Kevin Croke-coached students are without their top try scorer, Munster’s Paddy Patterson, for the next few weeks. Rob Gilsenan replaces him at scrum half, Tom Coughlan is the only other change in the second row.

Preview: Former Leinster out-half Cathal Marsh slots into the Terenure College back-line for the visit of second-placed Garryowen. ‘Nure are looking to back up their last-gasp triumph at Trinity two weeks ago.

James Connolly and Jordan Coghlan are notable absentees in the back row, meaning a positional switch for Luke Clohessy to openside flanker. Conall Boomer starts at number 8 and Mike Murphy comes into the engine room.

With Munster embarking on their two-match South African tour, Garryowen are without the likes of Ben Healy and Jack Daly. Academy call-up Tony Butler is set to return at out-half, eager to add to his 40 points so far.

Preview: Patrick Campbell, one of three new additions to the Munster Academy, returns at full-back for Young Munster’s top-four clash with Clontarf. Conor Hayes reverts to the right wing.

The table-topping Cookies pair Tom Goggin and captain Alan Kennedy together in the second row, with the Brisbane-born Bailey Faloon promoted from the bench to start at blindside.

Clontarf, who won 7-6 on their most recent visit to Greenfields, were stymied by Lansdowne’s robust defence in the last round. Five-try hooker Dylan Donnellan remains a big weapon for ‘Tarf from mauls.