It was a good week for Galway Corinthians and Ulster clubs Dungannon and Belfast Harlequins in Division 2B, with Neil Doak’s ‘Quins involved in another close-run thing.

Galwegians bookended the second half with tries, but Belfast Harlequins prevailed on a 16-14 scoreline at Crowley Park thanks to a talismanic performance from Paul Kerr.

The goal-kicking centre scored 11 points from the tee and provided the assist for replacement Malcolm Corry’s crucial 61st-minute try, which has moved Harlequins up to second in the table.

The opening 40 minutes were pockmarked by unforced errors from both sides, a slew of set pieces and stop-start phases. It was no surprise to see the scoreboard bare until early after the restart.

Indeed, the second half was less than a minute old when nice hands from Conor O’Shaughnessy and replacement Andrew Paton opened the way for scrum half Kelvin Langan to go in under the posts. 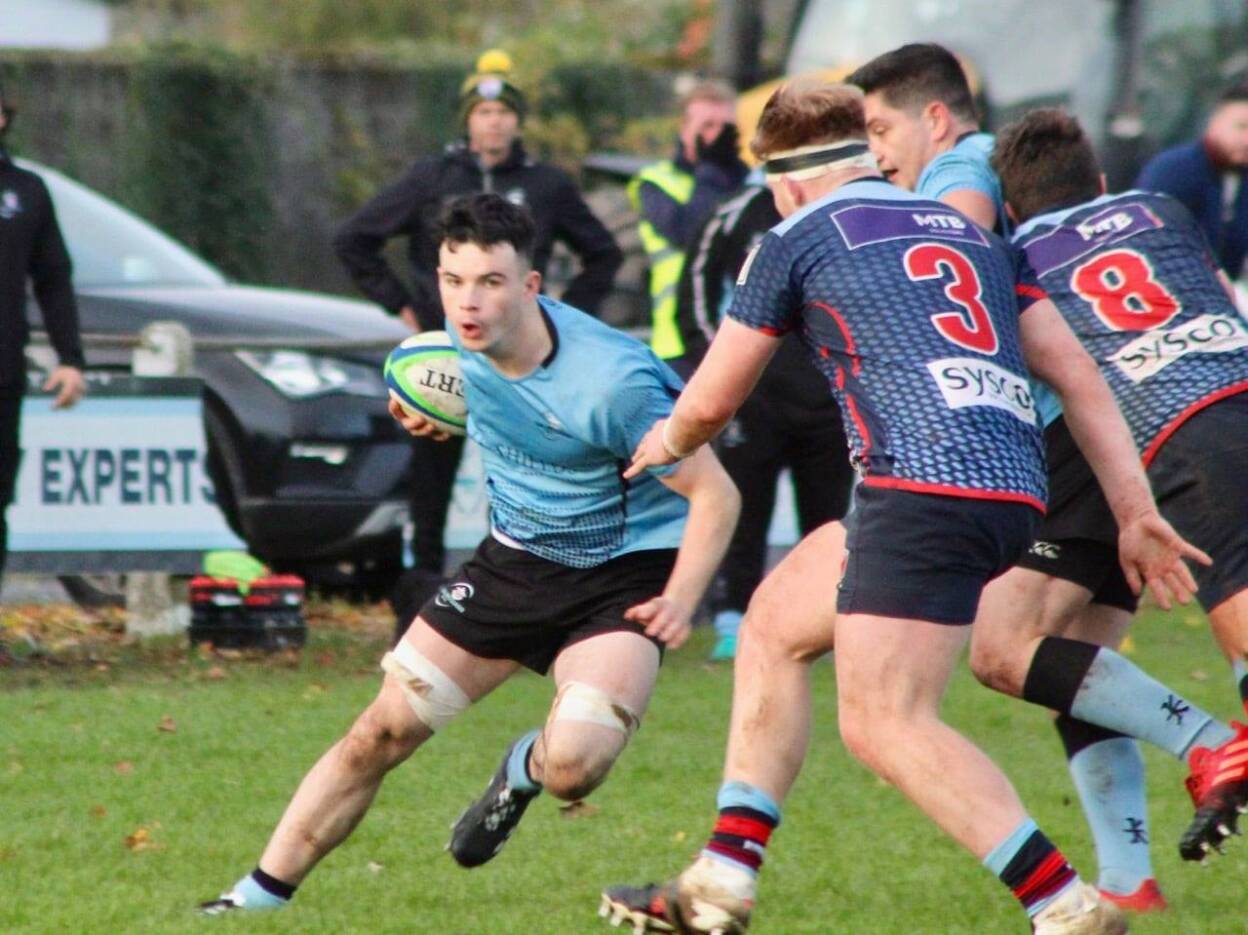 Seven points to the good, ‘Wegians had to absorb plenty of pressure in their own 22, rallying with a hard-earned scrum penalty, before centre Rob Deacy’s sin-binning preceded Kerr’s first penalty goal of the game.

The ‘Quins inside centre increased his influence on the hour mark, taking a nice line and evading a few would-be tacklers to send Corry over for an elusive try, which Kerr converted for 10-7.

The visitors’ player-of-the-match kicked them further in front with well-struck penalties after 70 and 73 minutes, the first of those kicks landed from just inside Galwegians’ half.

Ja Naughton’s men, who sit second-from-bottom in the standings, rebounded well during the closing stages to gain a losing bonus point. Lock Ben McGuinness scored a 79th-minute try from a quick tap. 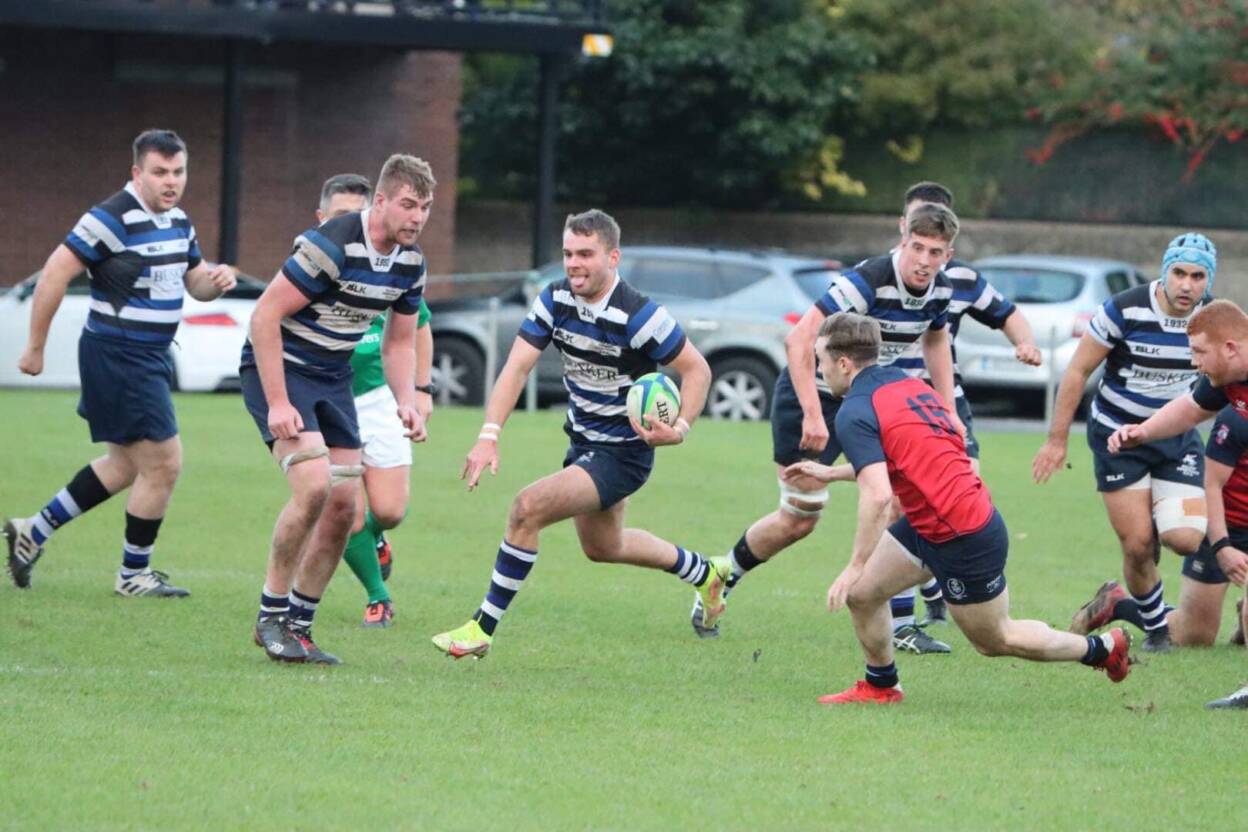 Galway Corinthians’ trip to the capital went like a dream, a tremendous run of 30 unanswered second half points guiding them to an emphatic 41-3 bonus point victory at Wanderers’ Merrion Road base.

Corinthians number 8 Cian Huxford crossed in the left corner for the opening try, but it was the backs who really shone, in particular nippy scrum half Matthew Devine and Ireland Under-20 international Cathal Forde, in the centre.

Ballinasloe native Devine provided three try assists and scored a memorable one of his own, beating three Wanderers players to a kick through from the halfway line. 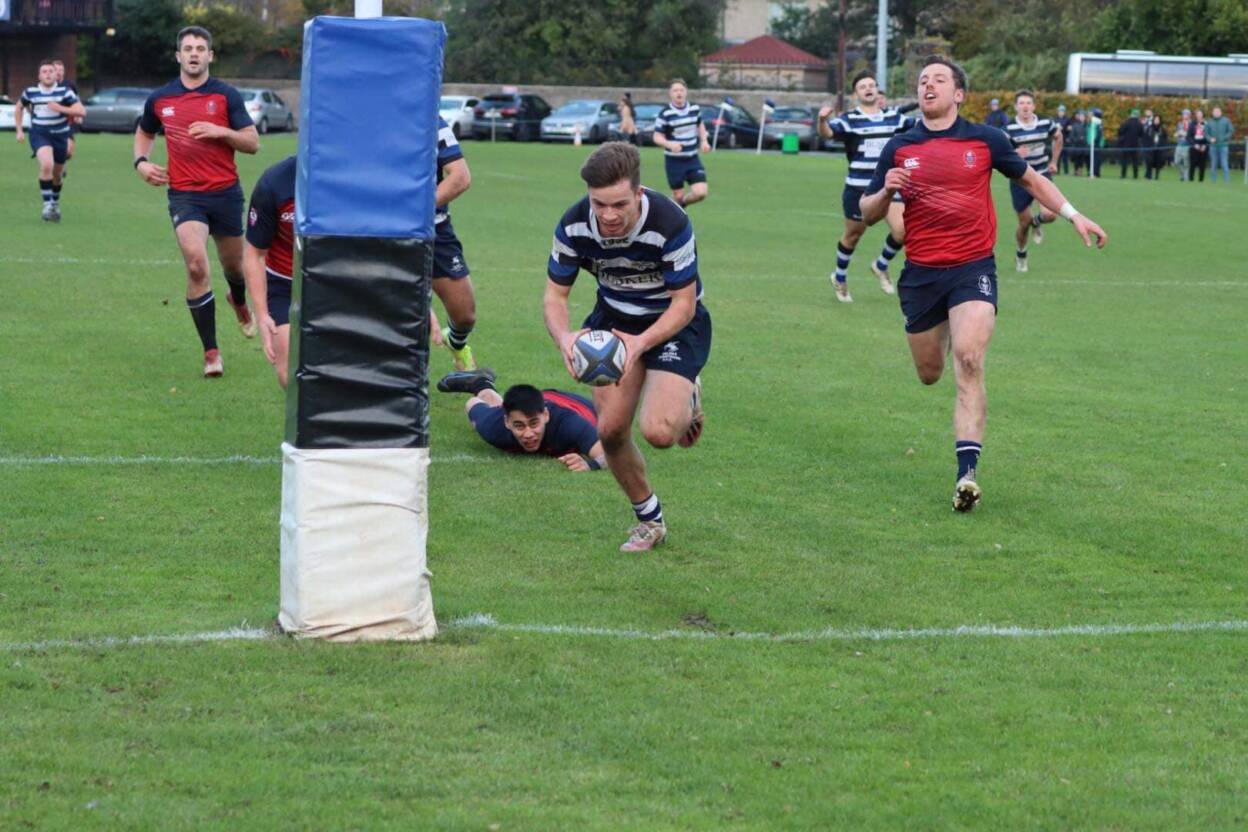 He popped up an offload off the ground for Connacht hooker Dylan Tierney-Martin to score, and also seized upon a late turnover, outfoxing two defenders to send Forde charging in beside the posts.

Talented centre Forde, who is a member of the Connacht Academy, also displayed his place-kicking skills. His excellent 23-point haul included four penalties and three conversions.

Last Saturday’s Connacht derby in Strandhill ended in a 13-all draw between Sligo and Ballina. Josh Reeves and Craig McCormick swapped early penalties, with the hosts having the lion’s share of possession. 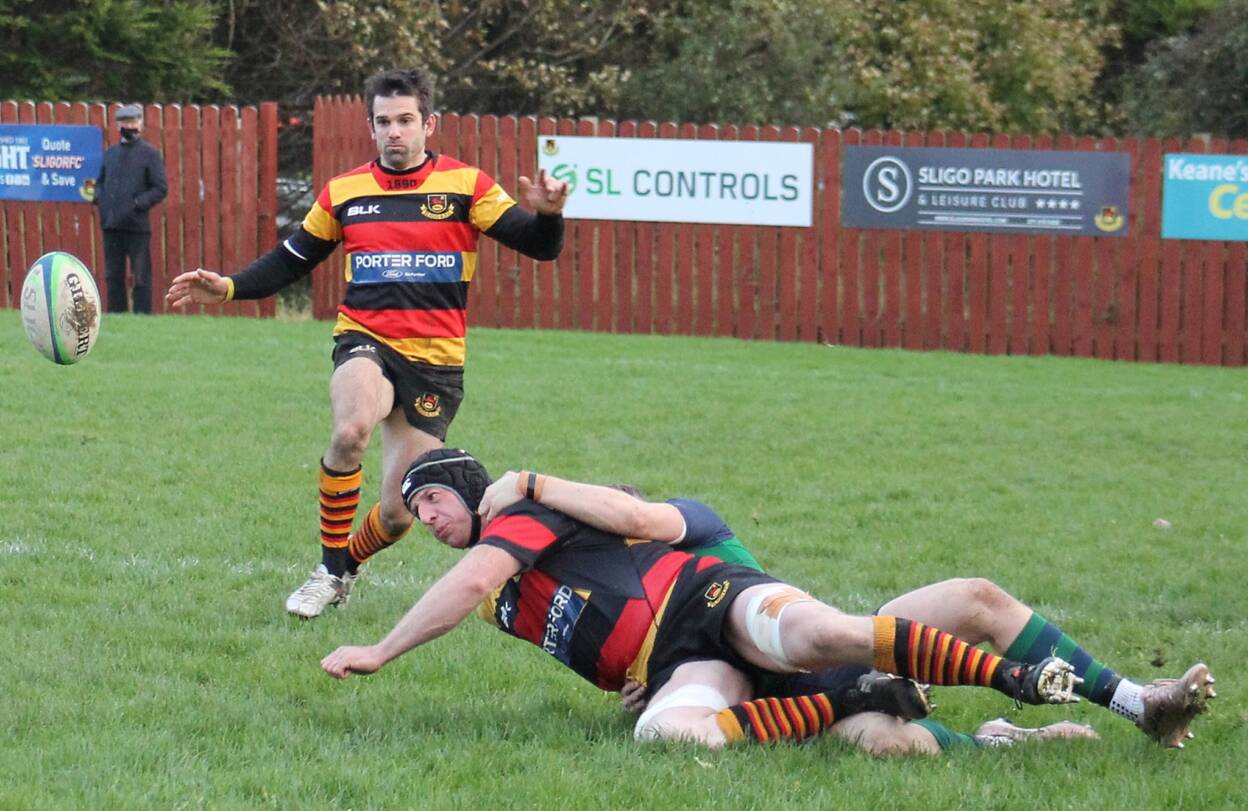 Sligo led 8-3 at half-time but should have been further in front. They scored a try in the 20th minute, Hubert Gilvarry using a lineout maul to snipe down the blindside and send winger Stefano Giantorno diving over in the corner.

Ballina thwarted a Gilvarry-inspired Sligo during the second quarter, and their pack also held up a maul. It was their turn to press on the resumption, Coghetto producing a try-saving tackle on Bradley Nealon.

Sligo responded with a terrific counter-attacking try, lock Rob Holian bursting through midfield and passing to scrum half Gilvarry who, from the Ballina 10-metre line, managed to sidestep the cover and score in the corner.

A McCormick penalty in the 60th minute kept Ballina in contention, and they were back level with 10 minutes remaining, prop Conor Mason squeezing over for a try converted by McCormick.

Credit to the visitors, they absorbed some late Sligo pressure – Reeves’ men threatened again through their maul – and deservedly took home a share of the spoils. 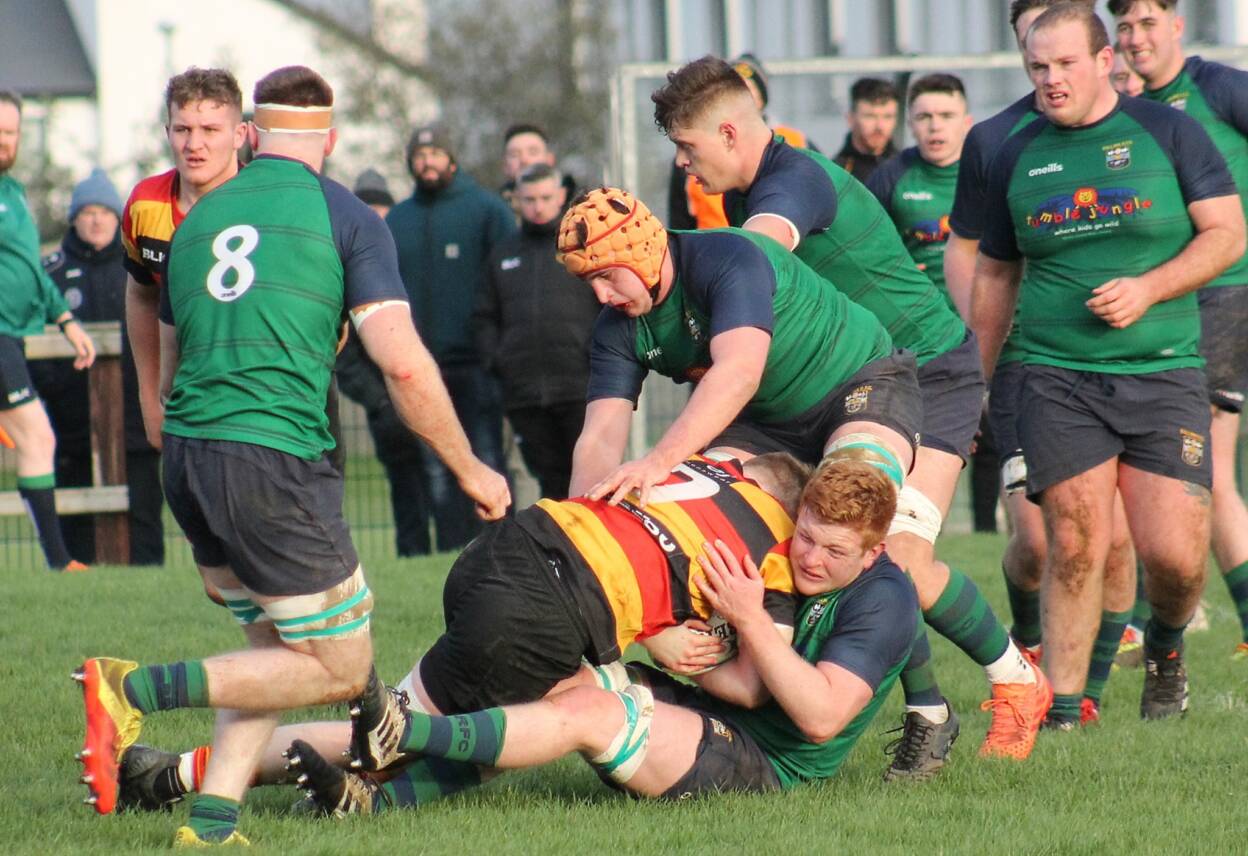 It was a much more open game at Dr Hickey Park where unbeaten leaders Greystones claimed a 48-29 bonus point victory over Blackrock College. They are now seven points clear at the top.

A fired-up Blackrock gave them a tougher time of it than the scoreline suggests, especially early on when they took a 10-0 lead. James Blaney’s charges were only 24-22 behind at the break.

Despite leaking another early try, Greystones went on to have the better of the second half. Ivanhoe Takatai and Patrick Kiernan had key contributions off the bench as the home side began to dictate.

Tighthead prop Conor Pearse crossed from close range, Kiernan did likewise from a pick-and-go, and strong-running centre Callan went on to complete his brace with 10 minutes remaining.

Again, Greystones captain Killian Marmion was responsible for giving his side some breathing space on the scoreboard thanks to his surefooted kicking. He finished with 18 points, moving him to 79 for the season.

Dungannon went from sixth to third place in the standings following a 26-12 triumph over Malahide at Stevenson Park. Captain Andrew McGregor produced a player-of-the-match performance from full-back.