We are nearly a third of the way through the Energia Men’s All-Ireland League season, and Queen’s University, Buccaneers and Ballymena are locked level on 20 points at the top of Division 2A.

Cashel produced the upset of the campaign so far in ended high-flying Queen’s four-match winning run. To triumph 27-21 at Dub Lane, scoring four tries, made it all the more impressive.

Winless before round five, the Tipperary men brought a physical edge that knocked Queen’s off their stride. It was a tight contest at the break, the visitors leading 13-7.

But they did enough during the closing half to win by six points, with winger Steve McMahon’s 12-point haul, courtesy of a try, two conversions and a penalty, proving all important.

Conor Cashman, Brendan Crosse and Brendan Ryan also crossed the whitewash for Cashel, while converted scores from Jonny Hunter, Conor McKee and Robbie Johnston gave Queen’s a losing bonus point, which keeps them at the top of the table. 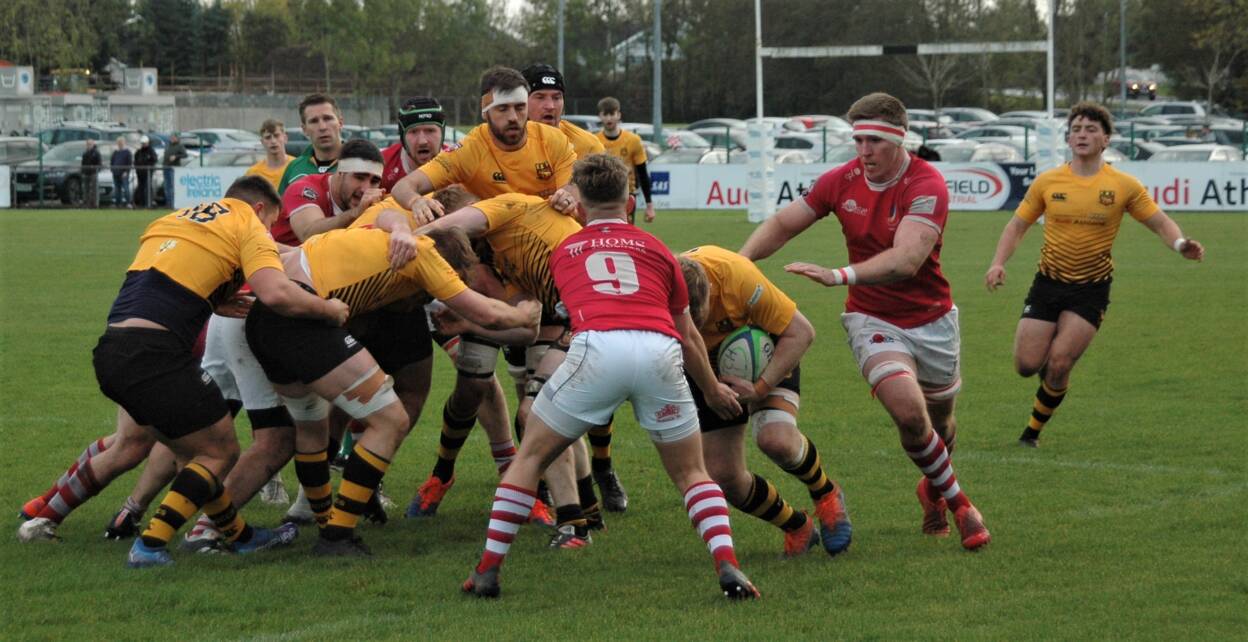 Buccaneers have climbed into second place after defeating UL Bohemians 24-17 at Dubarry Park. The Pirates scored all of their points in a very productive first half.

Buccs had five Connacht Academy players on duty, including Declan Adamson, Oisin McCormack and Ciaran Booth up front, with the latter moving to number 8 in place of injured South African Tabo Maree.

Two tries inside a devastating three-minute spell had the hosts 12-0 to the good. Winger Saul O’Carroll scored both, the second one well-finished near the posts after an excellent initial break by Stephen Mannion.

A Harry Byrne penalty in the 25th minute saw UL reduce the arrears, but a subsequent collapsed maul saw the Red Robins lose prop Philip Poillot to the sin bin.

Buccs applied further pressure and another collapse by Bohs resulted in a 29th-minute penalty try. After a couple of overthrows, hooker Declan Adamson redeemed himself with a try – from a Shane Layden pass – in the final play of the first half. 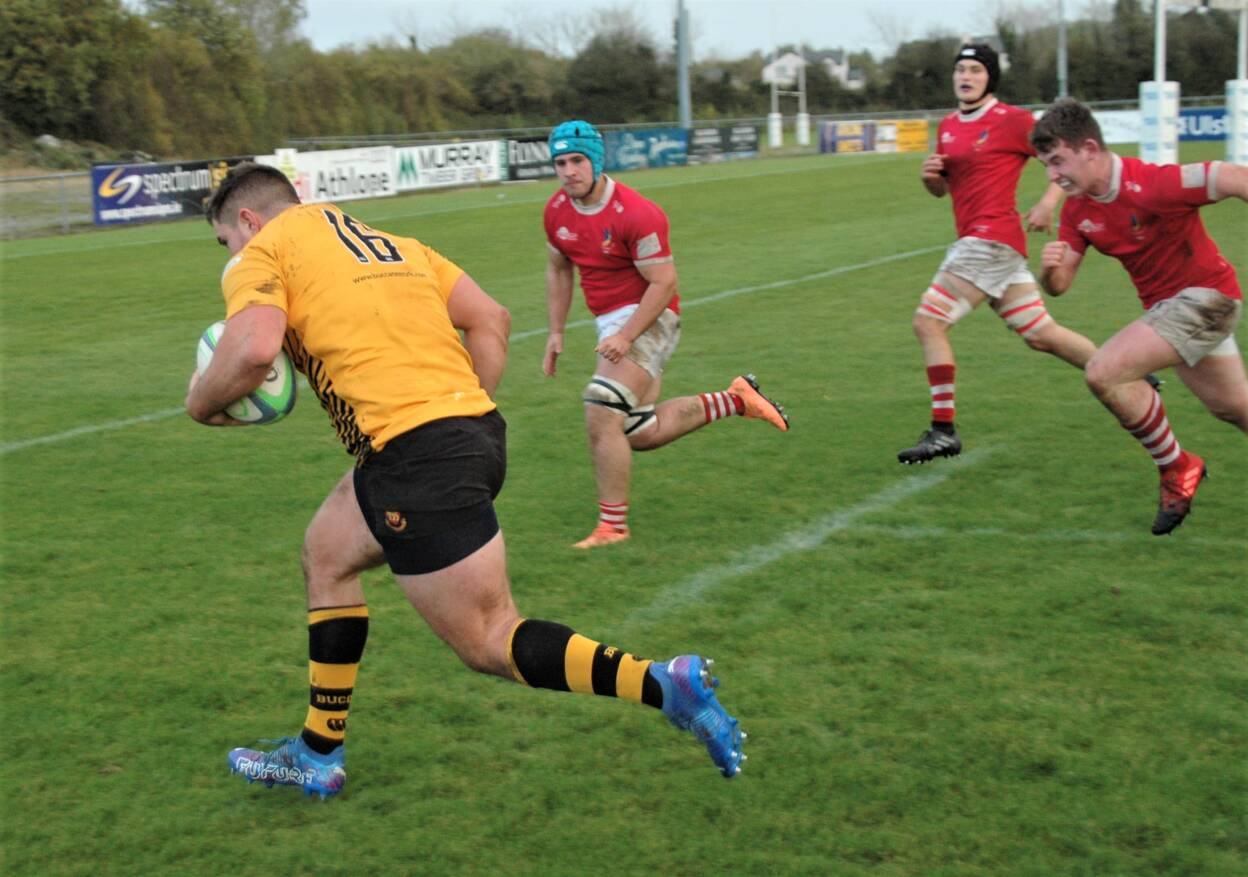 With the bonus point in the bag, the Athlone side took their foot off the pedal slightly. Bohs were much more competitive in the second period, full-back Darragh O’Gorman coming up in the line to touch down in the 54th minute.

Out-half Byrne converted and the visitors made sure they came away with a late losing bonus point, capitalising on a Ruairi Byrne yellow card to earn a penalty try in a gritty final 40 minutes. 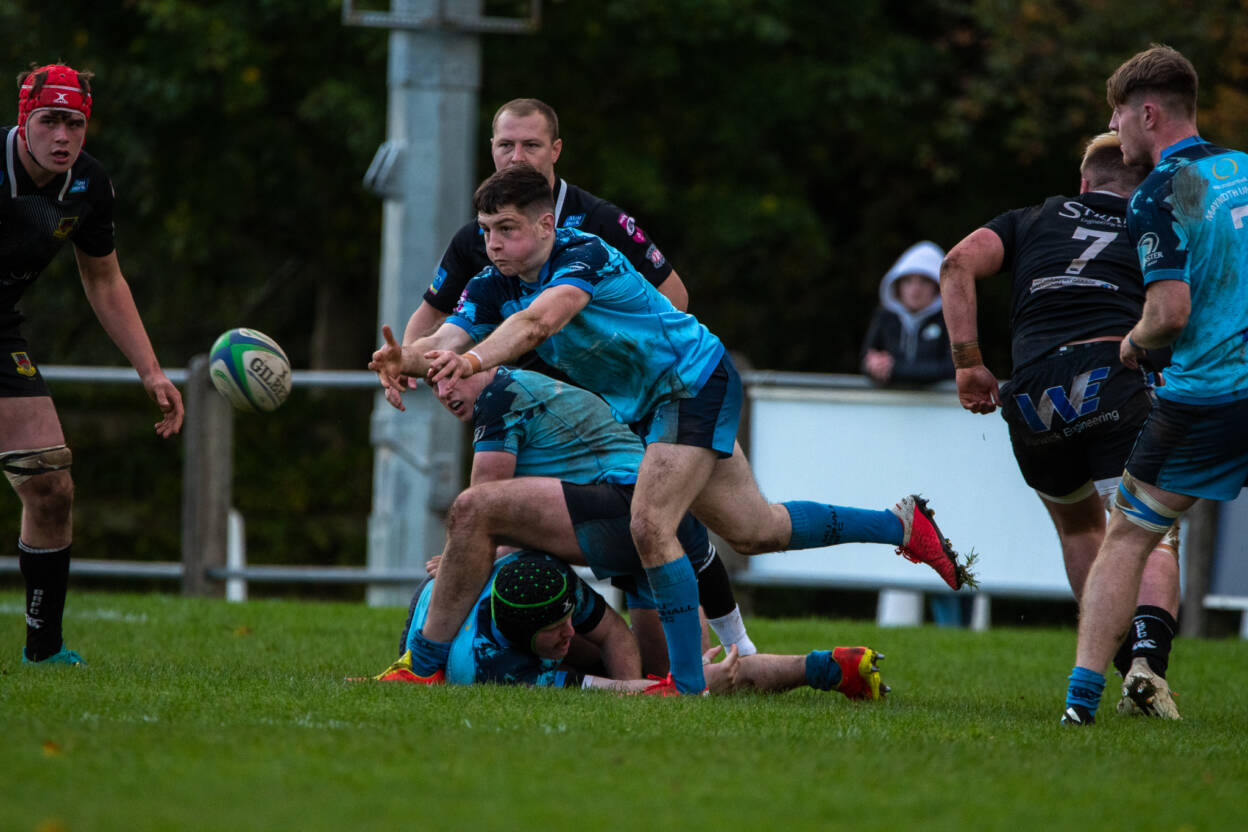 It was raining tries at a windy Eaton Park where Ballymena ran out 44-25 bonus point winners over MU Barnhall, handing the Kildare club their second successive defeat.

Ballymena lock Jonny Browne grabbed the game’s opening try from a close-in ruck, but Sean Higgins was quick to respond for Barnhall, following some good phase-building and recycling by the forwards.

The Blue Bulls appeared to have the answers, as James McCormick’s sixth try of the season for the Braidmen was cancelled out by a brace of penalties from Adam Chester for a 13-12 lead.

It was nip-and-tuck all the way up to half-time, a brilliant pick-up from Mark Thompson seeing him play in full-back Rodger McBurney for the hosts’ third try of the afternoon.

The rain was coming down heavily now, with wind-backed Barnhall also having a numerical advantage as Ballymena lost Sam Millar to the bin. The scores kept coming. 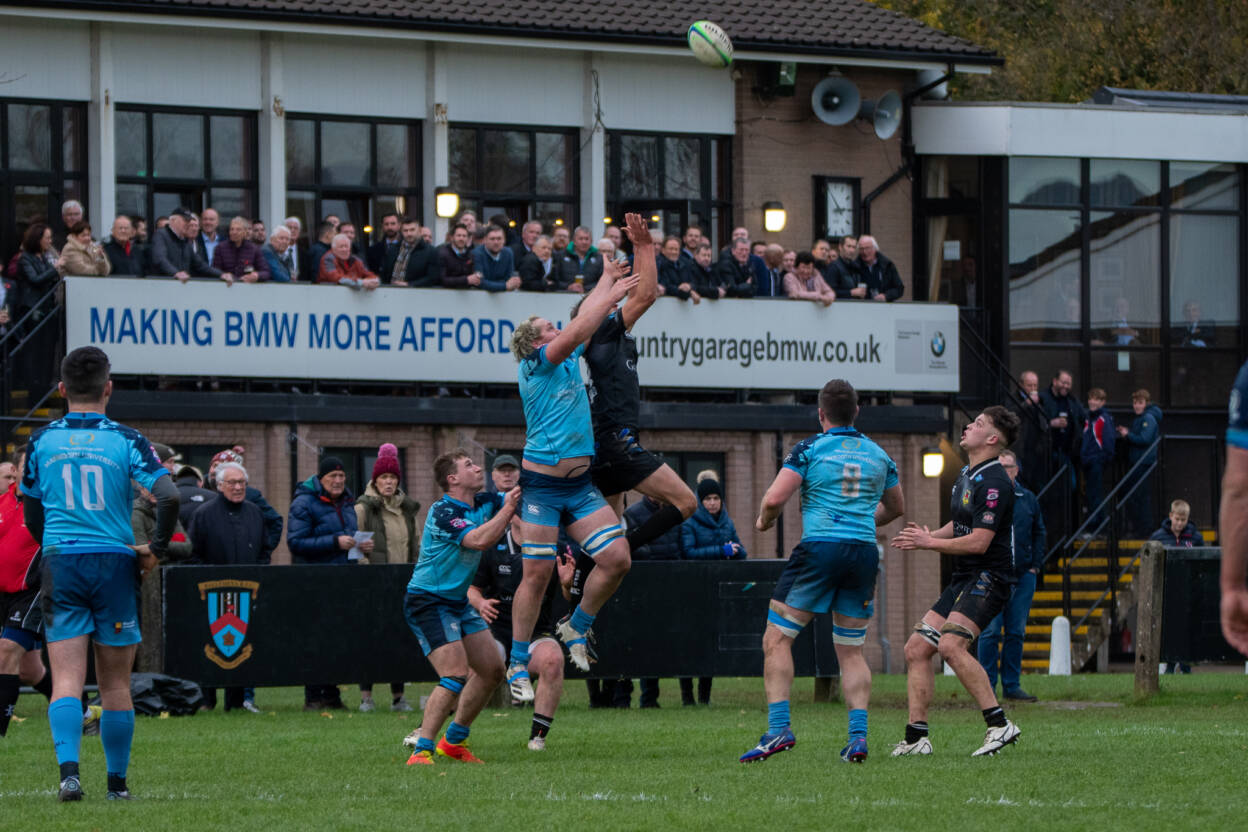 Veteran number 8 Tom McKeown broke from a scrum in the hosts’ 22 and fed Conor Duggan to go over in the corner. Yet, Ballymena saved the best for last, taking a 24-20 lead into the interval.

A couple of brilliant breaks from David Whann and Tim Small led to James McNabney securing the bonus point score, after out-half Small had perfectly executed a two-on-one.

A Chester pass released David Dooley for a 47th-minute try as Barnhall edged their way back in front by a single point. However, that proved to be the final score that Adrian Flavin’s men could muster.

Centre Thompson’s running caused problems for the Barnhall defence, and flanker Adam Lamont was able to gleefully slip through with a cheeky pick from a ruck. Small converted for a 31-25 scoreline.

Ballymena had the winning of the game when winger Matthew Corr picked off a wide pass and broke clear for an intercept try. Small added the simple conversion. 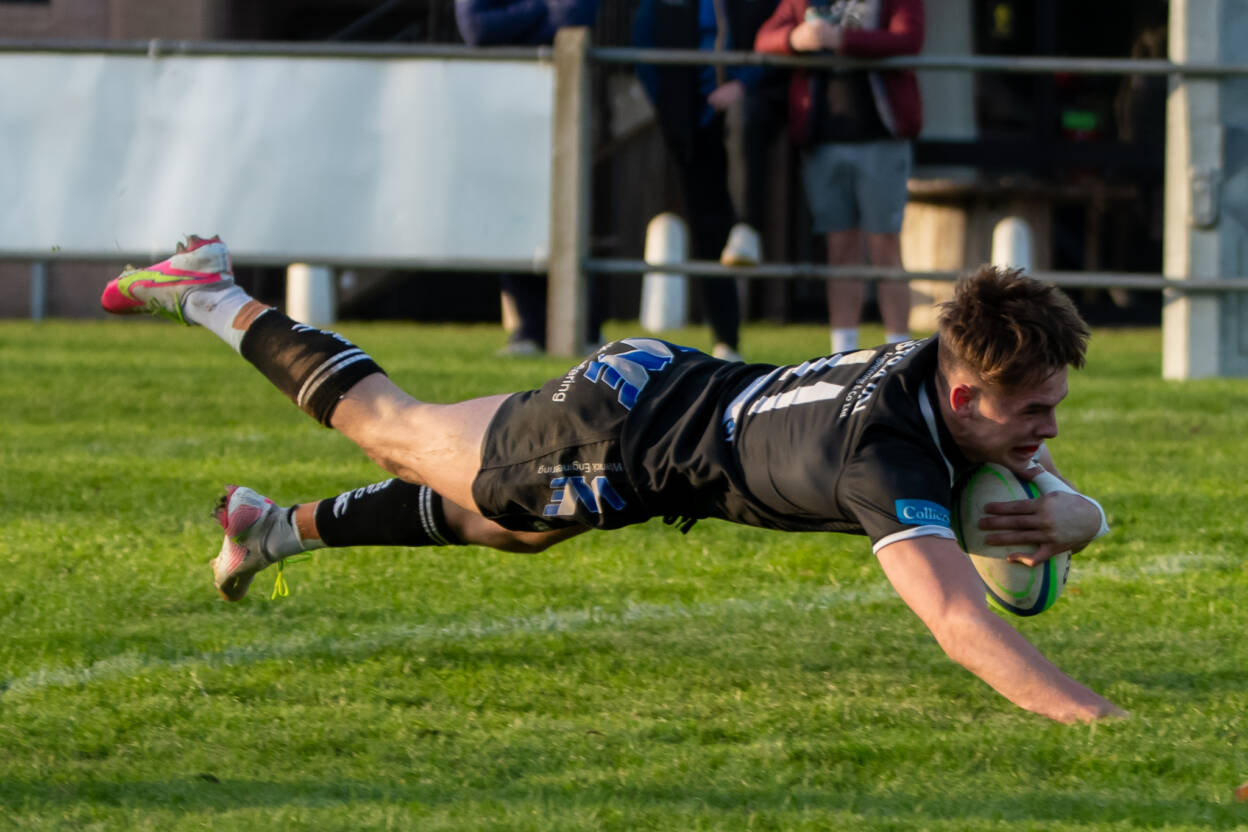 The influential Ballymena number 10 finished with a 14-point tally, topping off his contribution with two long-range penalties in the 64th and 74th minutes.

Crescent were 21-0 clear by half-time, ever-impressive out-half Ronan McKenna knocking over three penalties before sending a pinpoint cross-field kick out to the left for winger Dan Hurley to run in a lovely late try.

It was two tries apiece in an evenly-contested second half, but Dolphin could not rein in their hosts. Hurley completed his brace and Niall Hardiman, the stand-in captain, sealed the bonus point from a 79th-minute maul.

Crescent have climbed two places up to eighth in the table, one behind Rainey Old Boys who also returned to winning ways with a 24-12 success at home to Nenagh Ormond.

Rainey, who were with a win since the opening round, held Nenagh try-less at Hatrick Park, the visitors’ only points coming from four Fionn McGibney penalties.

Converted scores from Michael O’Neill and Connor Smyth, coupled with a penalty try, saw the men from Magherafelt take the spoils. They visit bottom-placed UL in the next round.