The IRFU Director of Women’s and Sevens Rugby, Anthony Eddy, believes the forthcoming Autumn Tests will present the Ireland Women with an ideal opportunity to turn the corner following their recent World Cup qualification disappointment.

For the time since falling short at a Europe Qualifier tournament for next year’s global finals in New Zealand, Ireland will be back in competitive action, against USA at the RDS this Friday (Kick-off 7.15pm). This Test encounter will then be followed by a showdown with Japan at the same venue on Saturday, 20th November (Kick-off 3pm). Tickets for both games are available to buy here.

“The group that went away for the World Cup qualification, they put in a hell of a lot of work in preparing for that. They came back extremely disappointed in their performance, which is understandable. During difficult times, where they had a number of false starts around World Cup qualification and putting other things on hold just to continue to go to the next stage,” Eddy said during a media call on Monday.

“I think for them they’re looking for a little bit of redemption. They’d like to be able to show themselves as a group, but not only themselves, the wider community that follow the women’s game and also the whole community of Ireland that they’re a better team than what people saw from them over in Parma.”

The USA and Japan will be familiar to some members of the current squad, given Ireland have faced both nations in recent years. Back in November 2018, they played host to the US at Energia Park in Donnybrook with the visitors coming out on top on a final scoreline of 19-10.

A year earlier, Ireland defeated the Japanese in the pool stages of a home-based World Cup – thanks in no small part to a brace of tries from back-row Paula Fitzpatrick. The two sides also faced off in a couple of warm-up games in advance of the tournament with Ireland claiming back-to-back victories in spite of a strong effort by Japan.

Given both of their forthcoming opponents will be going to next year’s delayed World Cup – and will face each other in Pool B – Eddy is expecting two tough assignments for the Ciara Griffin-led Ireland.

“I think the USA and Japan are tricky encounters for them. USA will be a very physical team, there’s no doubt about that. They’re preparing for a World Cup as our Japan. They’ll both be looking to be extremely competitive and have strong teams out. It will absolutely be a challenge, but I’d like to think that our group is definitely up for it and capable of a really good performance.” 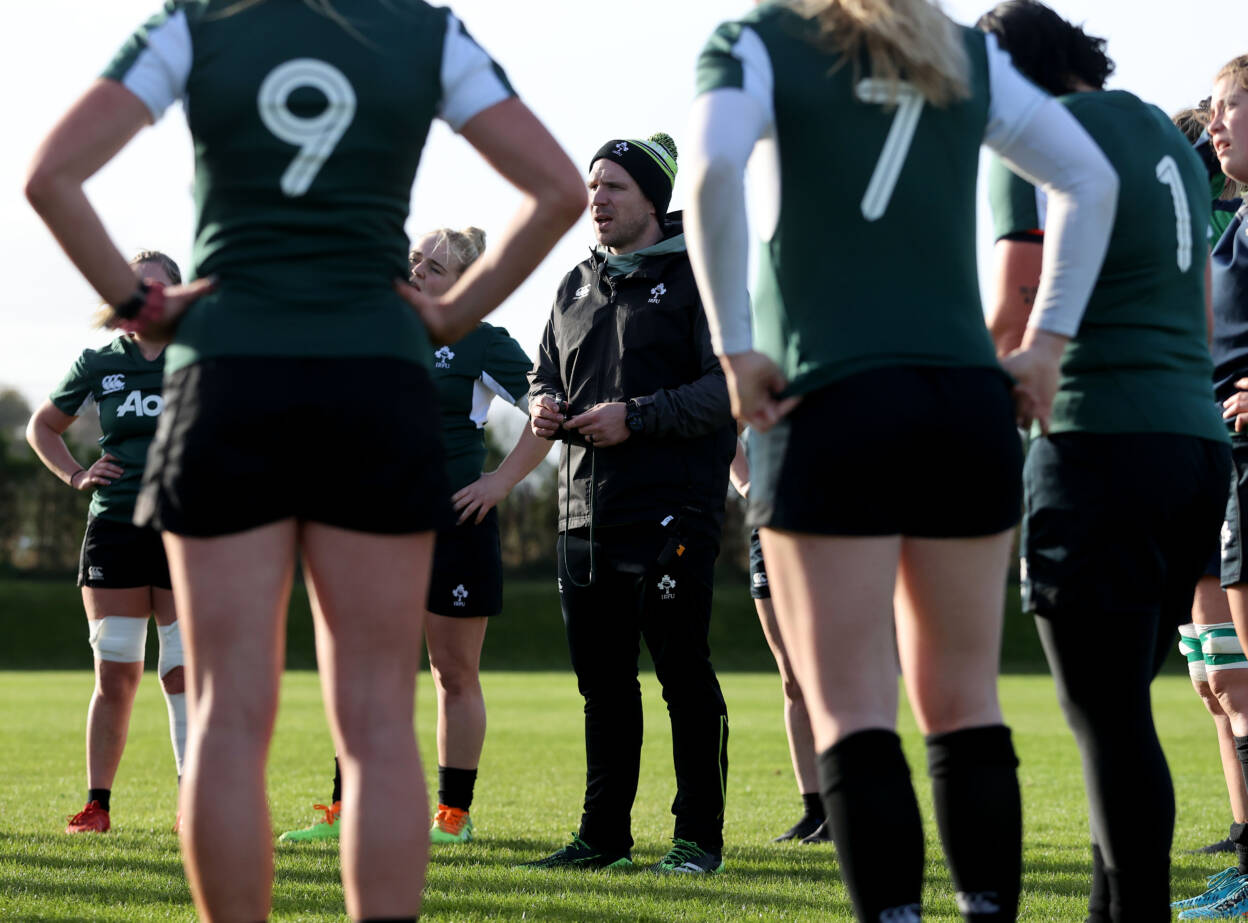 The upcoming games will also mark the end of Adam Griggs‘ tenure as Ireland Women’s Head Coach. Having initially been appointed on an interim basis in the winter of 2017, the New Zealander subsequently assumed the role in a permanent capacity.

He will be replaced in the hot seat by Greg McWilliams, who previously served as assistant coach to Philip Doyle during a very successful period for the women’s game in Ireland. Eddy saw the Dubliner as an ideal candidate once Griggs revealed he was going to step down and looks forward to working with him over the next few years.

“When we came back from Parma, Adam made it known the fact that we didn’t qualify, he wasn’t going to progress. Greg is back in Ireland, he’s an extremely capable coach. Having coached in the women’s game before and also moved over to the USA, and had success over there. A very suitable candidate to fulfil that role.

“There’ll be some change over in staff. Greg will have a lot of say around who he brings in and who he doesn’t bring in. Those decisions will be made after this November window. It’s not as if he’s preparing for the February Six Nations with the Women’s Six Nations being moved back to that March/April window.

“I’m sure he’s already talking to people and he and I will have discussions around the appropriate people to come in and fulfil the roles, to take that group forward. Greg will be charged with preparing that team for the next cycle. There’ll be some change over and turnover of players as well. We will actually be looking for the next cycle and developing a core group of players that will ideally go through until 2025.”

Having featured at seven World Cups in succession from 1994 to 2017, everyone connected with women’s rugby on these shores will be desperate for Ireland to return to the global stage in four years’ time. In order for the game to prosper into the future, there are a couple of key areas that Eddy feels need to be addressed.

“Increase the player depth, and to be able to choose competitive teams that can go out and play against your Frances and Englands and New Zealands, and so on, and be a lot more competitive than we are at the moment.

“That’s the conundrum that we’re in at the moment, because we’ve still got to grow the game domestically – that’s the most important thing – and still have a quality competition for the girls, to attract the girls to come and play in. That’s our focus at the moment,” Eddy added.