At the end of what he described as ‘a strange week’, Ireland’s latest centurion Jonathan Sexton was delighted to get the business done on the pitch at the Aviva Stadium on Saturday afternoon.

On his 100th Test appearance for his country, the Leinster out-half contributed 16 points – including a second half try – to help Andy Farrell’s men defeat Japan 60-5 in their Autumn Nations Series opener.

Given the short time the squad have had together during the current international window, Sexton cut a satisfied figure at the post-match press conference.

“It has been a strange week since the team was announced. The amount of text messages that have been coming in. I think I’ve been on the phone for a record time, just answering replies to people yesterday (Friday),” he admitted.

“It means a lot, things like that, but then I had to remember I have a game to play. I had to try and make sure that I got my performance right.

“I did some good stuff. I had a couple of mistakes that I’d like to iron out, but the first game back is always a little bit rusty. We’ve only had three or four sessions together.

“To put out that standard of performance I thought was a testament to the boys, to the management. To the work that we’ve done.

“We did a tough week last week, to make sure we were ready this week to do a proper Test match week. We got our rewards, I think. Japan, I don’t think that has been done to them in a long time.

“We’re very, very pleased, but we know that there’s a bigger test ahead next week (against New Zealand).”

Throughout the game at the Aviva Stadium, Sexton was afforded a warm reception by the Ireland supporters who were back in mass numbers at an international rugby match for the first time since the start of the Covid-19 pandemic.

This is something he greatly appreciated on the day, although he did spare a thought for some of the players who were behind closed doors for similar milestone moments.

“You couldn’t not notice it. Like I said, it was a very special moment for me. Up there, like I said to the lads, with the best moments of my career.

It was an incredible ovation and then I saw my family, I knew where they were sitting before the game. They were smiling as well. Then I was trying to switch in, to make sure I got the conversion (to his try).

“Probably more happy about that than anything. It was a very special moment to shut out the game. Leading your country out for any game is special, but to do it today and have a crowd back, I couldn’t make it up.

“I said it on the pitch, that I feel a bit guilty because Cian Healy got his 100th cap in an empty stadium.

“Two of my best friends in the game, Rob Kearney and Fergus McFadden, retired in an empty stadium. Didn’t get a send off. I do feel a bit guilty that I got to this point.”

Following an impressive all-round performance against the Brave Blossoms, who only lost by eight points on their last trip to Dublin in July, Ireland will now switch focus for the visit of New Zealand next Saturday.

This much-anticipated clash will take place in front of a full house and is expected to be a major test of Ireland’s resolve. 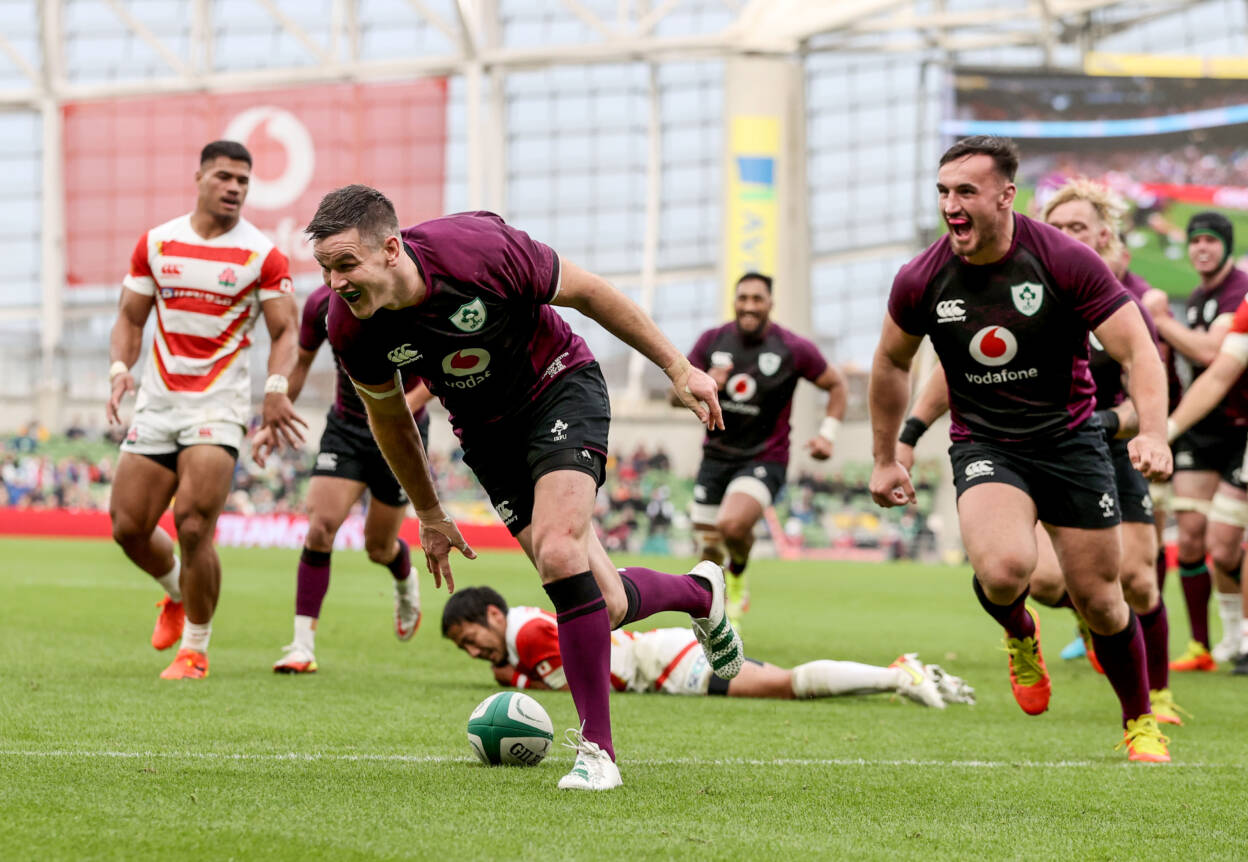 The All Blacks began their autumn campaign with a 54-16 win over Wales in Cardiff, before having 38 points to spare against Italy in Rome on Saturday.

Despite letting their World Cup crown slip in Japan two years ago, the recent Rugby Championship winners remain one of the most formidable teams in international rugby.

As pleasing as their runaway victory over the Japanese was, Sexton knows this Ireland side will need to be at the peak of their powers when facing Ian Foster’s charges.

“I don’t think you’d ever say you’re really confident about beating the All Blacks, because you need to get away from thinking about the result,” acknowledged the Ireland captain.

You need to go and look after the process. Make sure that you put out your very best performance and that will give you a chance. If we don’t do that, we’ve no chance.

“Obviously we’ll do our analysis on them. The All Blacks have got some really dangerous players. They’ve got a good coaching team, they’ve had some good results of late.

“We’ll give them the respect that they absolutely deserve. We’ve got to concentrate on making sure that we give our best version of ourselves next Saturday. That will be the most important thing.”