Young Munster have climbed to the summit of Energia Men’s All-Ireland League Division 1A after Mark O’Mara’s maul try on the hour mark guided them to a tense 19-9 win at UCC.

Munster Academy back rower Alex Kendellen impressed at number 8 for the students, winning a number of turnover penalties as centre Daniel Squires’ boot kept them in contention.

However, Young Munster sharpshooter Evan Cusack top-scored with 14 points thanks to five successful kicks as they took advantage of Garryowen’s defeat to go top of the table.

UCC signalled their intent with Louis Kahn dangling a kick down on top of Conor Hayes who was immediately swallowed up by Kendellen and Matthew Bowen, leading to an early penalty chance.

Squires split the posts in impressive fashion from just inside Munsters’ 10-metre line. The visitors made it three points apiece soon after, Cusack firing over to punish a ruck infringement.

Squires was wide with his second penalty attempt, from inside Young Munster’s 22, before a scrum penalty and a promising lineout drive had Gearoid Prendergast’s side in try-scoring range. 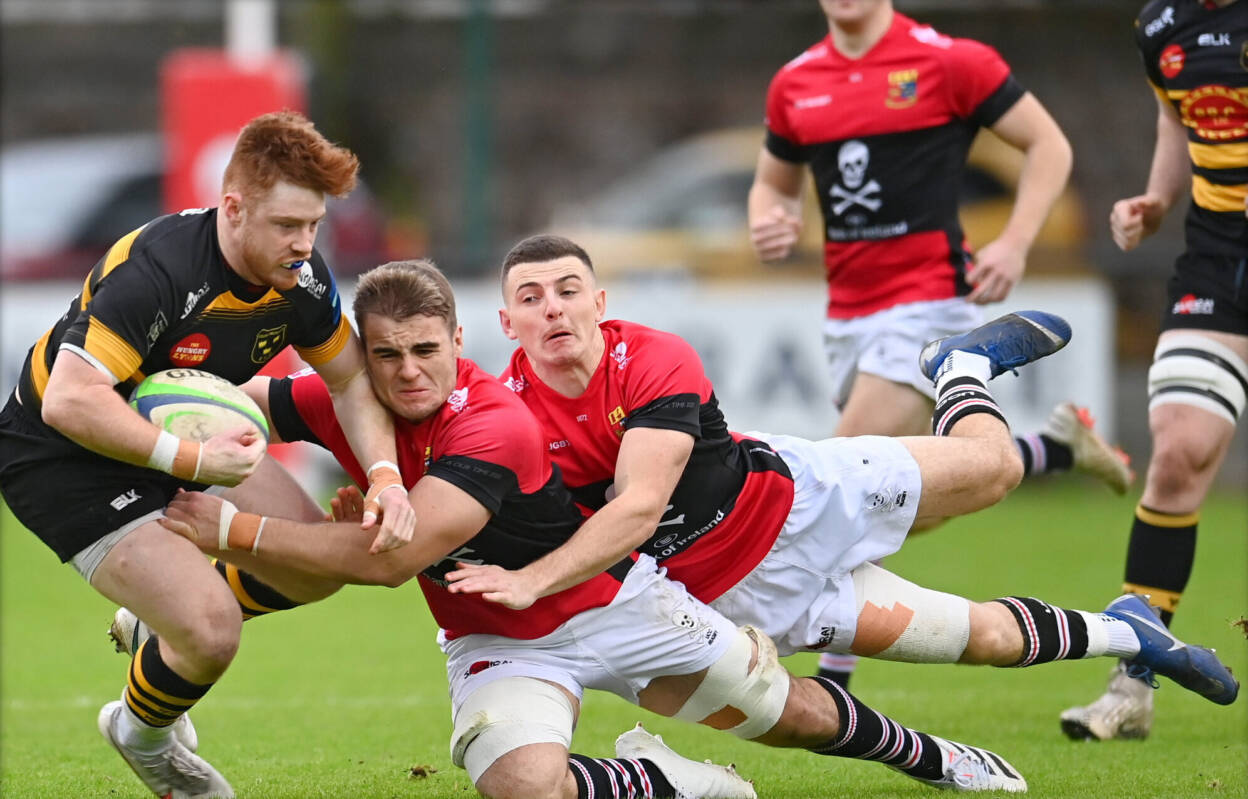 Although Kendellen and George Coomber combined to deny Jack Harrington a try in the right corner, play was called back for a prior penalty and Cusack made it 6-3.

Before the first water break, UCC also created a try-scoring opportunity for Matthew Bowen, working the ball wide for the in-form winger but he was crowded out near the left corner by Hayes and Harrington.

The Cork side also went close from a hack through by centre Darragh French, with the Cookies fortunate to avoid a penalty for a pullback by prop David Begley close to their posts.

Nonetheless, Cusack rifled over a penalty on the half hour mark, rewarding a strong scrum from his forwards, and then UCC lost Munster Academy hooker Scott Buckley to the sin bin for preventing a penalty being taken quickly.

Cusack and John Foley connected brilliantly in attack, the flanker flooding through into the UCC 22, only for Kendellen to force a turnover penalty. 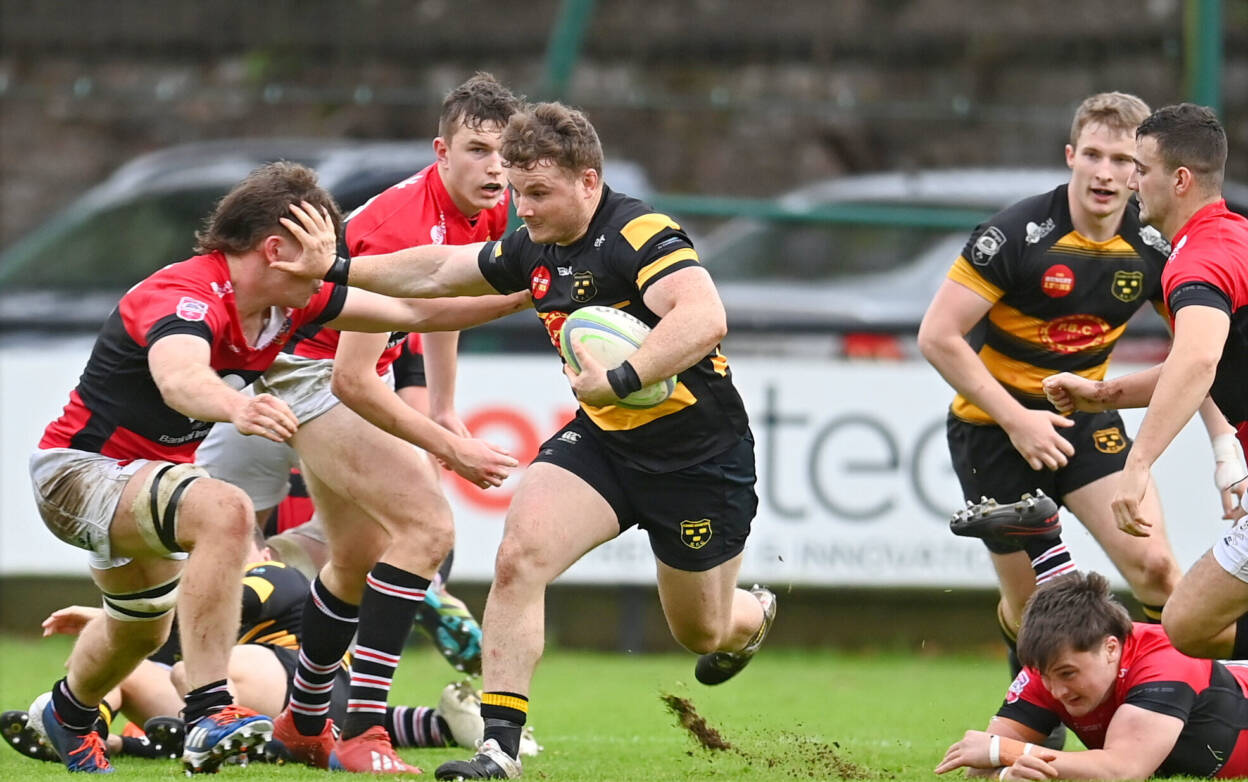 Leading 9-3 at the break, Munsters turned around facing into a stiffening wind. Kendellen’s industrious breakdown work earned a long-range 47th-minute penalty which Squires knocked over with aplomb.

UCC unfortunately lost openside Finn Burke, who had to hobble off with a bad injury. The scrum continued to be an area of dominance for Young Munster, with Cusack turning a penalty into three more points.

Squires reduced the arrears to 12-9 with another well-struck penalty in the 55th minute, rewarding Kendellen’s ability again to be first in at the breakdown.

Nonetheless, Cookies tighthead Colm Skehan continued to have the upper hand on Corey Hanlon at scrum time – Conor Bartley had switched across to loosehead – and an under-pressure Hanlon was sin-binned towards the end of the third quarter.

Munsters quickly took advantage of the UCC prop’s absence, surging through from a lineout maul near the right corner with O’Mara grounding the ball. Cusack’s conversion put 10 points between the teams. 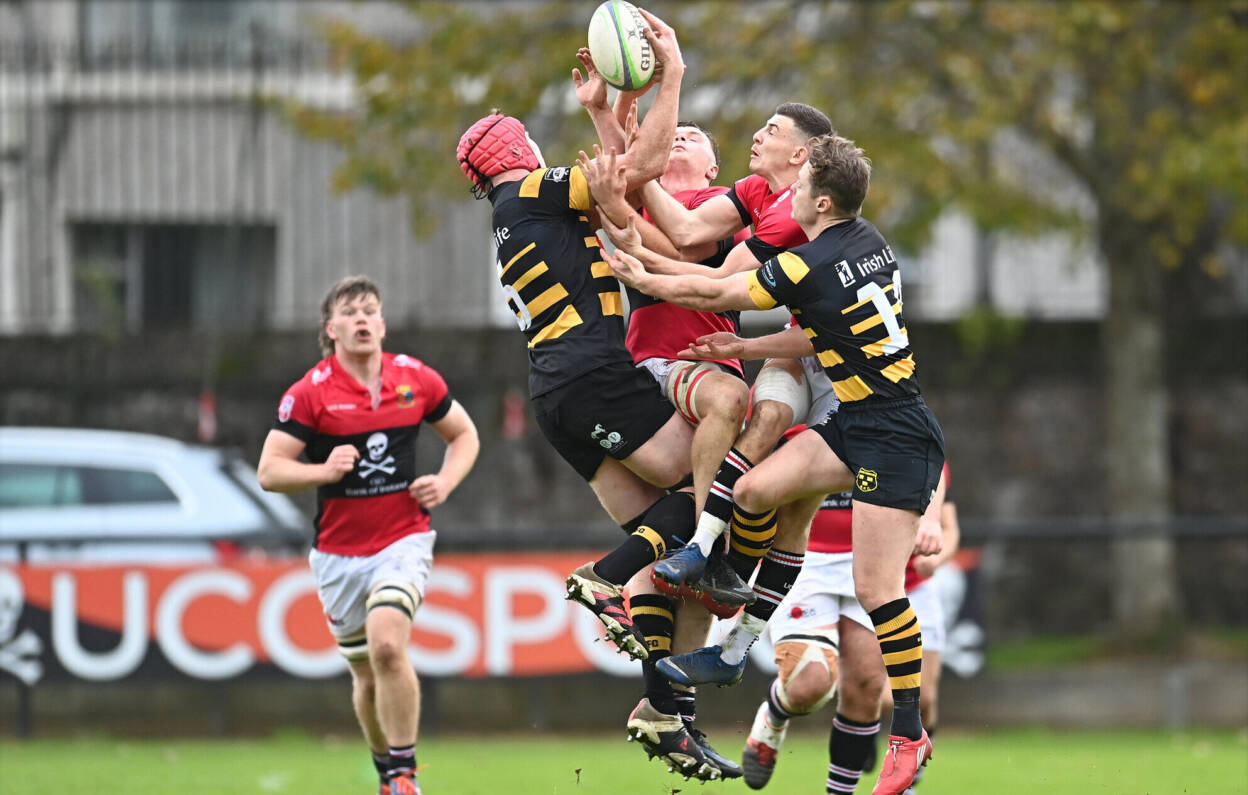 That was a considerable lead considering how tight the first hour had been. The visitors had also brought on Munster winger Calvin Nash as he looked to get more game-time into his legs.

With little over 10 minutes remaining, Cusack pushed a penalty wide from distance, and Squires did likewise after Cian Whooley was felled by a high tackle from Pa Ryan.

UCC’s performance belied their current league position of 10th, but a losing bonus point remained frustratingly out of reach. They travel to second-from-bottom Ballynahinch in the next round.