Caolan Dooley was the toast of Terenure College after landing a last-gasp penalty to overcome Dublin University 16-15 at College Park.

The young centre’s coolly-struck kick from just inside the Trinity half cleared the crossbar, sparking scenes of jubilation amongst his team-mates as they halted a three-match losing streak.

Trinity had tries from Ronan Quinn and Louis O’Reilly, with Terenure crossing through winger Craig Adams. Dooley finished with 11 points from the tee.

Play was congested in and around the halfway line for the opening 10 minutes, an early rain shower and a blustery wind not helping matters. Both defences were well-organised too.

Just when Trinity were getting into a promising position off an initial lineout maul, Terenure prop Campbell Classon thwarted them with a well-won turnover penalty in his own 22. 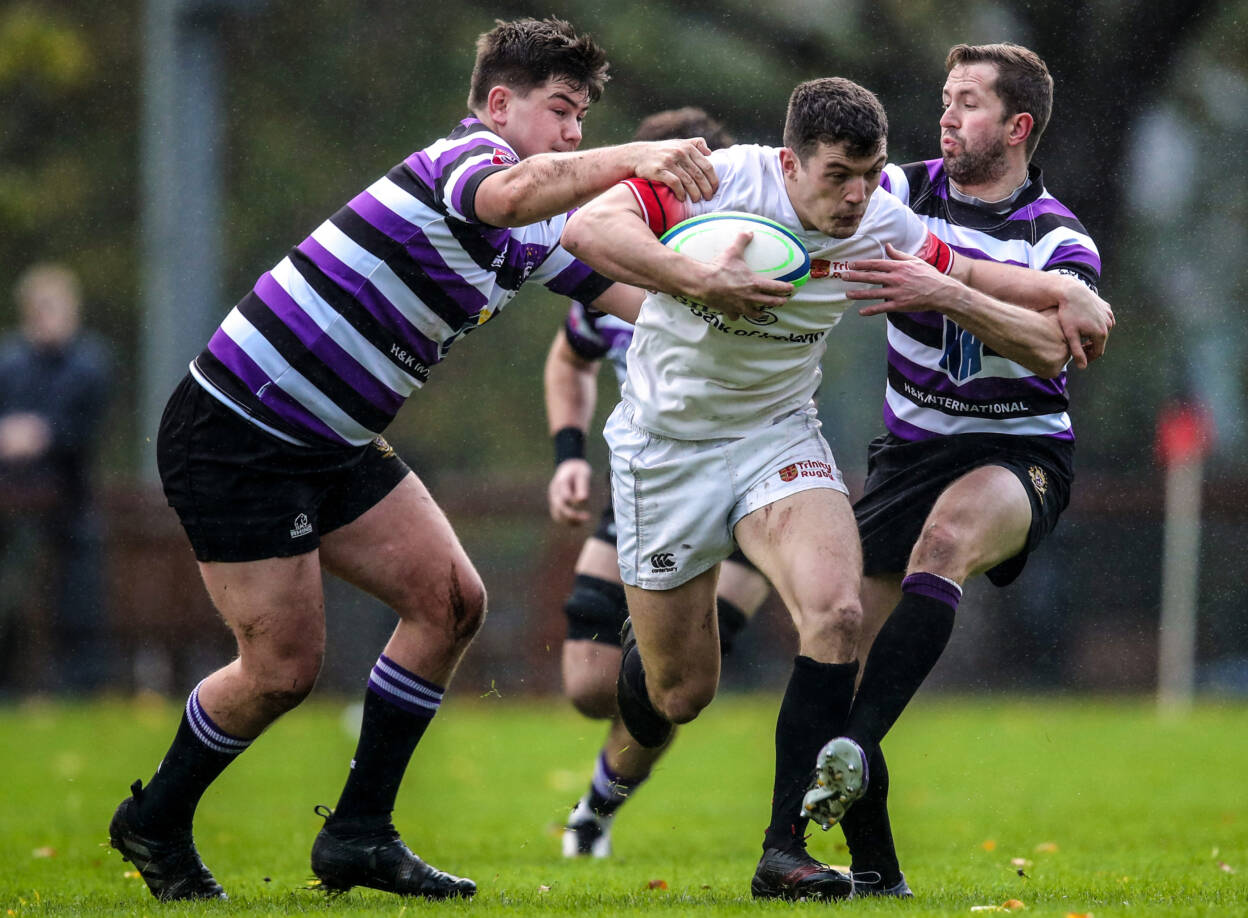 The tit-for-tat exchanges continued, a Luke Clohessy lineout steal for Terenure was closely followed by Trinity flanker Alan Francis winning a penalty at the breakdown.

‘Nure full-back Adam La Grue threatened from a break and his own kick through, but Marcus Kiely sprinted back for the hosts to make sure he was first to slide down on the loose ball.

However, he lost his centre partner Gavin Jones to a yellow card early in the second quarter. Jones caught Sam Coghlan Murray with a high tackle, but Trinity’s excellent maul defence kept the visitors out.

Openside Francis’ impact at the breakdown forced a kickable penalty in the 35th minute, and captain Mick O’Kennedy obliged from 30-plus metres to put Tony Smeeth’s youngsters ahead.

3-0 almost immediately became 8-0, Terenure winning the restart but Mark O’Neill’s midfield pass was intercepted by prop Giuseppe Coyne who had the pace to carry 65 metres downfield. 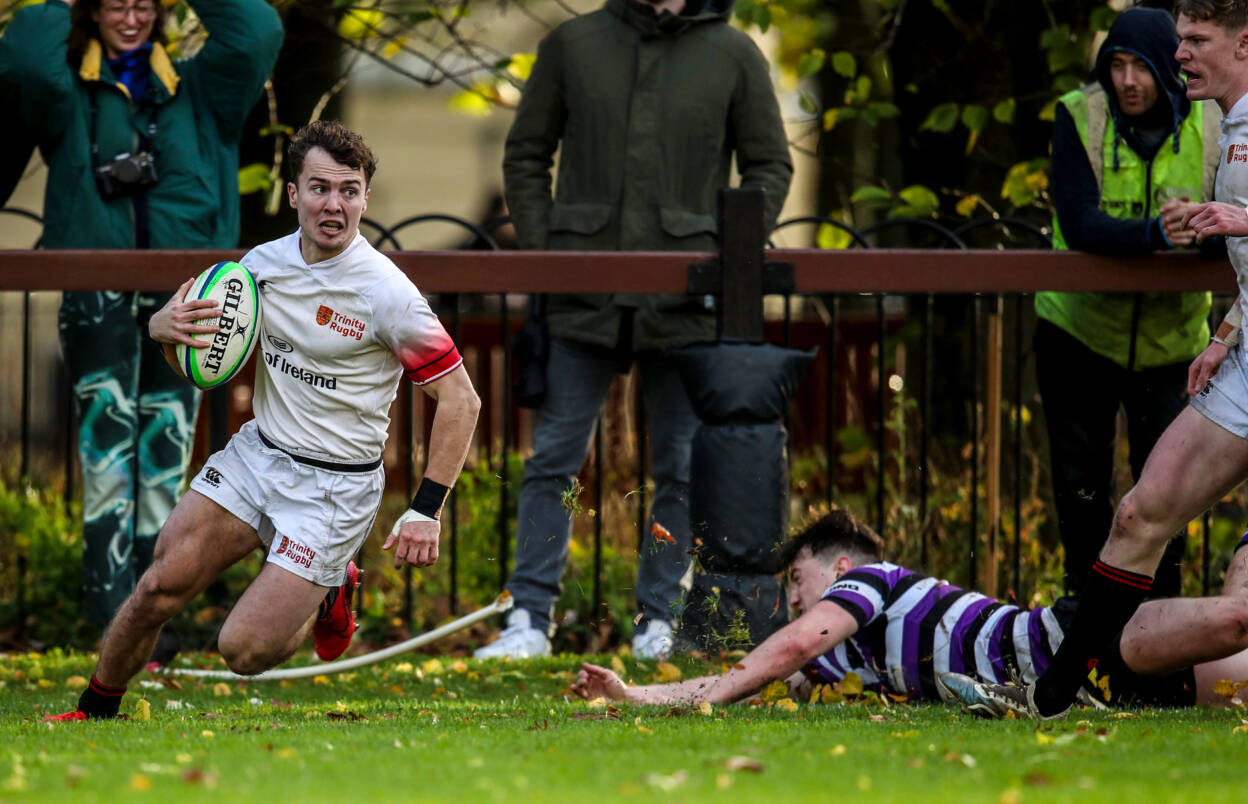 Scrum half O’Reilly and Kiely used the quick ruck ball to send Quinn darting over by the right corner flag. O’Kennedy pushed the conversion to the left and wide.

Terenure still had enough time to squeeze in an important try, on the stroke of half-time. It was a peach of a score that began back on their own 10-metre line.

Harrison Brewer offloaded before contact, allowing La Grue to send winger Adams breaking free down the left touchline. He jinked past Jones and offloaded back inside for La Grue to carry the move on. 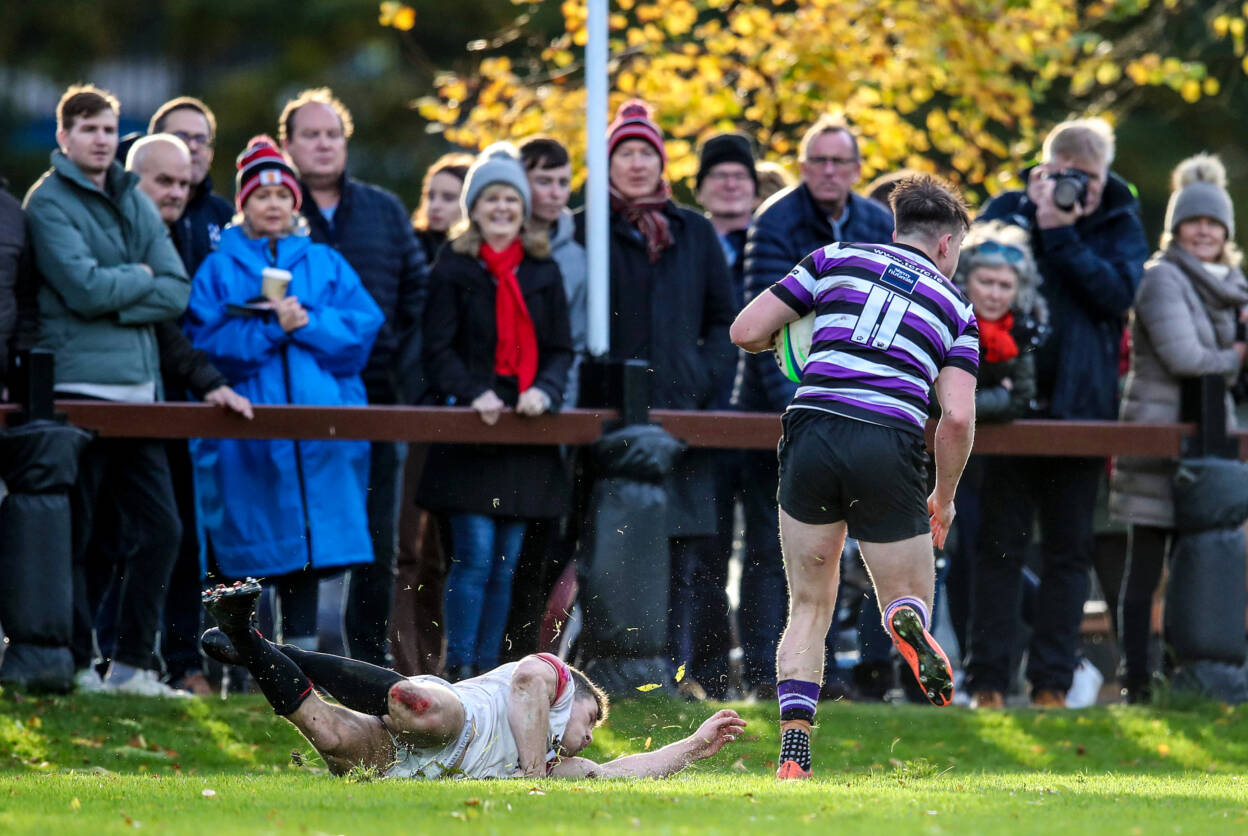 Alan Bennie was up in support and drew in a defender before releasing Brewer up into the 22, and although he was tackled, he got his pass away for Adams to dive over to the left of the posts.

Dooley’s conversion closed the gap t0 8-7, and Terenure had most of the early territory on the resumption, save for a scampering run by Quinn up to halfway.

A brilliantly-struck 47th-minute penalty from the left wing saw Dooley nudge ‘Nure in front, and he added another from closer in in the 55th minute, moving ‘Nure into a 13-8 lead.

In between, Dooley missed a kick from just inside the ‘Nure half, and Trinity began to spend more time in the right areas of the pitch early on in final quarter.

Luis Faria juggled a pass before releasing Hugh Twomey up into the visitors’ 22, yet Terenure answered back by winning two scrum penalties and another at the breakdown. 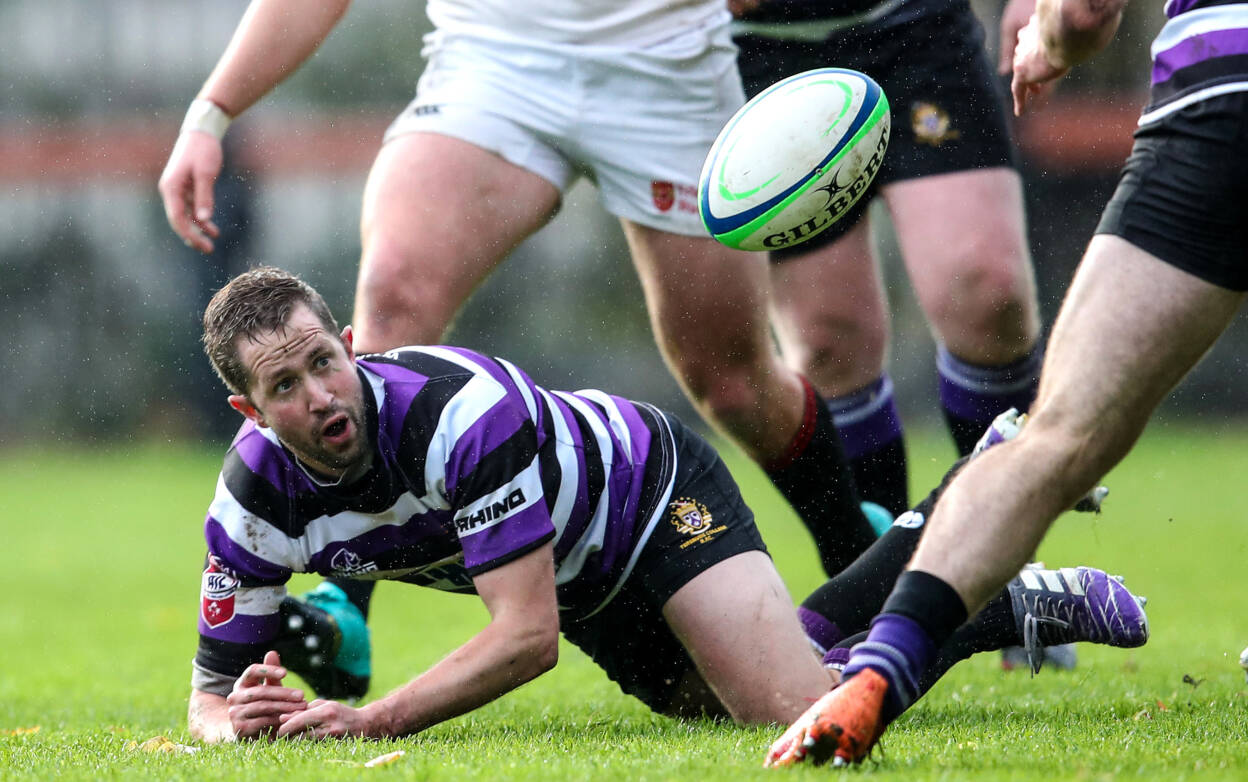 Kiely clamped his hands on the ball to win an important penalty for Trinity, with six minutes remaining. They worked possession infield from the lineout and suddenly tore through for a top class try.

Scrum half O’Reilly took off from a ruck on the ‘Nure 10-metre line, finding a gap between two defenders and throwing in a tremendous sidestep to get around a third. There was no catching him over the final 20 metres.

O’Kennedy nailed the conversion to put the students back in front, but their joy had turned to despair by the time referee Oisin Quinn had blown the final whistle.

Possession swung back and forth during the dying minutes, Terenure losing a lineout, pinching a turnover and then knocking on.

An O’Reilly kick was partially blocked down, giving the visitors one final attack. Trinity were caught offside near halfway and Dooley’s right boot snatched the win for Sean Skehan’s battling ‘Nure side. 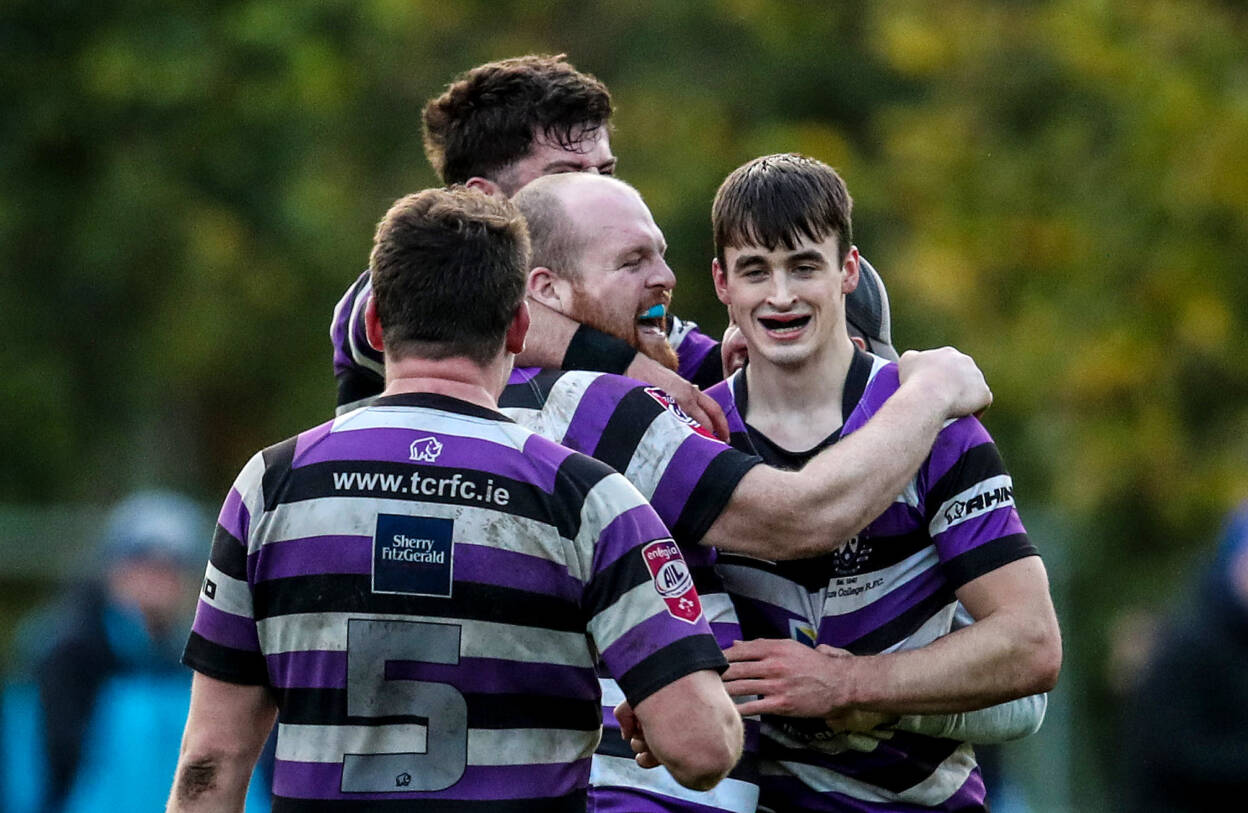