Considering the challenge they have posed in their most recent encounters with Ireland, it comes as little surprise to learn that Andy Farrell was thrilled to come away with a 60-5 win over Japan.

Farrell was defence coach when the Brave Blossoms defeated Ireland 19-12 during the pool stages at the 2019 Rugby World Cup on home soil.

The Wigan man subsequently assumed the head coach reins from Joe Schmidt and although he got the better of the Japanese in the summer just past, Ireland were made to work for that 39-31 triumph at the Aviva Stadium.

Under the guidance of Jamie Joseph, who permanently replaced Eddie Jones as head coach in 2016, Japan have garnered a strong reputation for their free-flowing and attacking brand of rugby.

From Farrell’s point of view, the key to Ireland’s latest victory was to stop them from gaining access to the parts of the pitch where they can cause the most damage.

“Like we all know, a game always takes its own course. You have an opportunity to influence the game. By a country mile, the best part of our performance was our defence,” he highlighted, speaking at the post-match press conference.

“We didn’t have to do much of it and that’s exactly what we want. We got the ball back very quickly because they are lethal on turnover ball. That’s what they thrive on, that and counter attack. 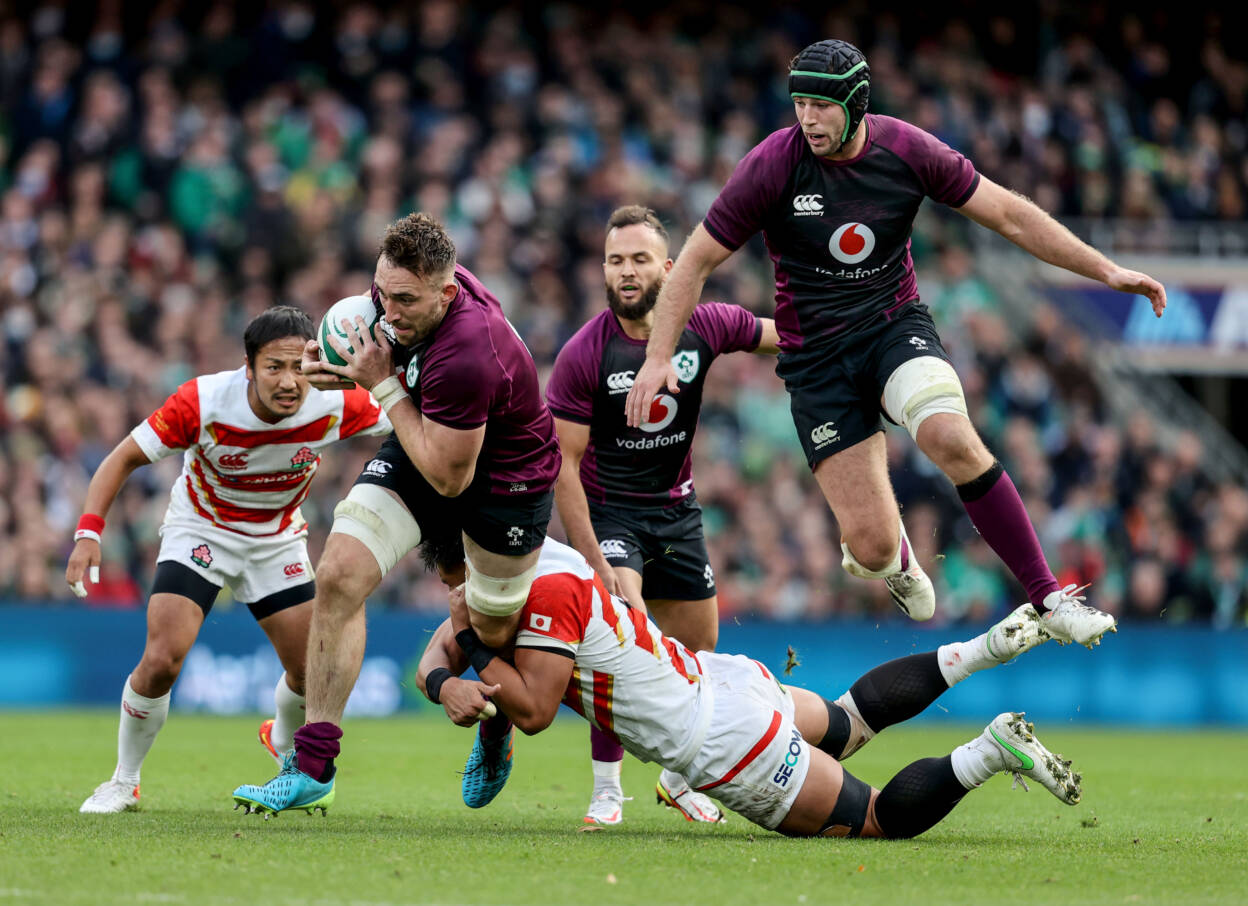 “We all know how dangerous they’ve been. Once you go after a team and force a few errors, and they know that’s their point of difference, it doesn’t feel right to them.

“I thought the balance was really good. I thought we were really disciplined in how we played the game. We exited very cleanly. One or two times with a few phases that was flowing for us deep in our own 22, but we were accurate.

“I think we got the balance right between taking them on up front and when the weather came in, I thought we managed that pretty well with our long kicking game and our kick chase was good on the back of that.

“It wasn’t perfect – there was a bit of discipline issues in the middle of that second half there – but it’s a pleasing day.”

Given how the Autumn Nations Series opener developed on the day, Farrell was able to unload his replacements bench with quite a bit of time to spare.

This allowed all eight players outside of the starting XV, including debutant hooker Dan Sheehan, an opportunity to stake their claims ahead of the forthcoming Tests with New Zealand and Argentina.

Farrell is pleased with the strength in depth of the squad at present and believes the performances of each player on Saturday will lead to a healthy battle for places.

I think there’s competition all over the park after a performance like that. I thought there was some special individual performances. Obviously Jack (Conan) got man-of-the-match, but you could have given it to a handful of people.

The pleasing thing is, like Johnny (Sexton) said, in the first week when we came together we worked extremely hard and this week the players have really taken ownership of what we wanted to achieve.

“There are some good pictures for us to push forward with for next week and hopefully we’ll take our game to New Zealand as well.”

In the scoring stakes, captain Sexton, on the occasion of his 100th Ireland cap, lead the way with 16 points, closely followed by eager winger Andrew Conway who registered a hat-trick of tries.

On the opposite wing to the Munster flyer, James Lowe also got his name on the scoresheet for the first time since his Ireland debut against Wales during last year’s Autumn Nations Cup.

In the build-up to the weekend’s match, Farrell had spoken about the extra yards that Lowe had put in since he last lined out for Ireland during March’s Guinness Six Nations success away to Scotland. 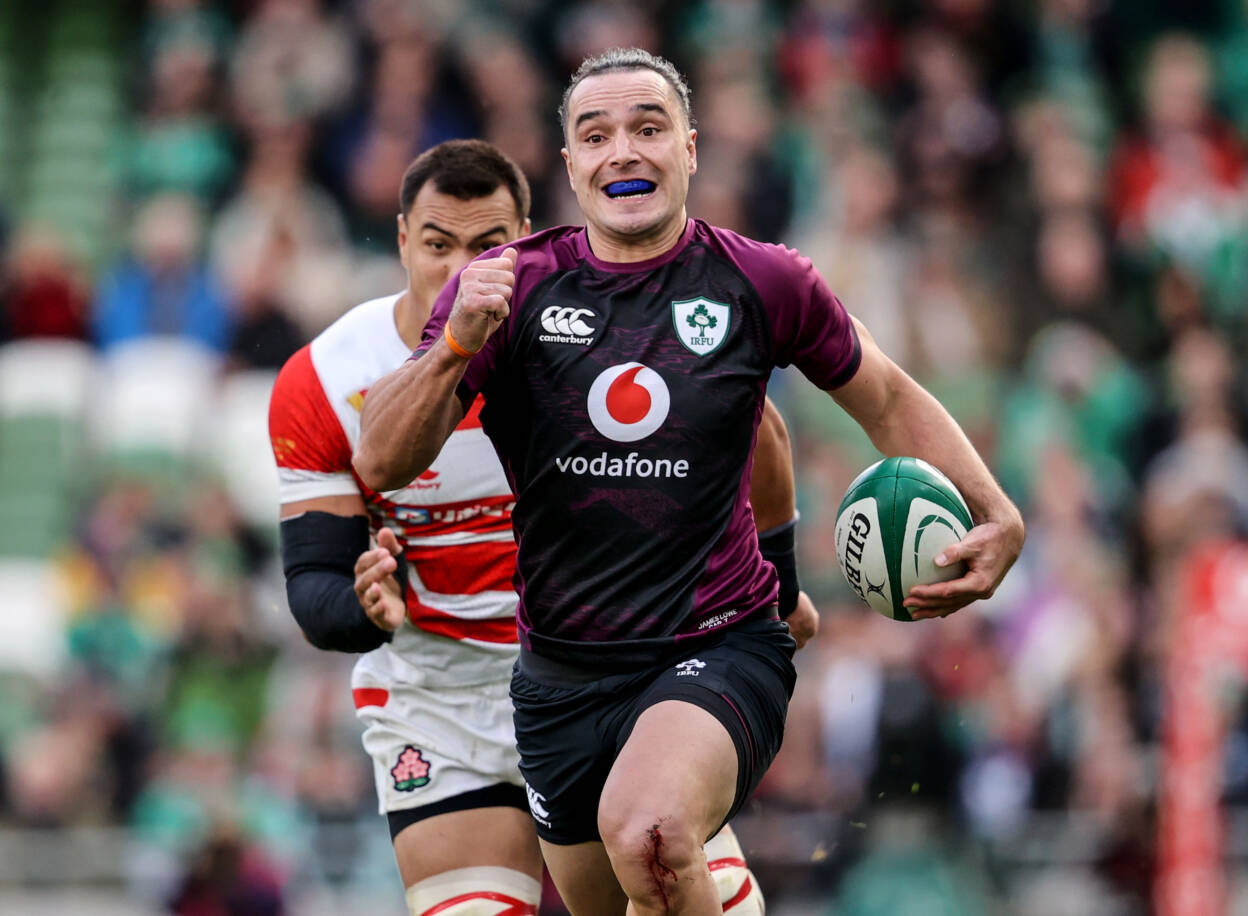 He was delighted, therefore, to see Lowe’s hard work and graft being translated to the Test arena, noting: “I said to you during the week, all the lads that have taken the field today, they’ve deserved their call-ups.

“Because of how we’ve seen them train over the last twelve days. James had a little bit of a wake-up call, went away and understood how he needed to prepare for international rugby.

“His preparation is through the roof in comparison to how it was before. He’s learnt the hard way. There’s a few things that he needs to get better from today as well, but his attitude is in the right place and I’m sure that will happen.

“He finds a way into the game. He’s not a tidy player and neither do we want our wingers to be tidy players.

“He finds his way into the game. He’s in great nick. He lost a bit of weight, he’s fit and I’m pleased for him.”

Stretching back to the third game of this year’s Six Nations – a 48-10 triumph over Italy in Rome – Ireland are currently on a run of six straight victories under Farrell.

While he admits that not every performance in this sequence has been note perfect, the Ireland head coach is pleased to be in a rich vein when it comes to results.

You can look at a run of six or you can analyse those six and say all those six weren’t perfect either. I think we’ve gotten to the six ‘Ws’ through the lessons that we’ve learnt.

“We want to make that seven, but we know that’s a tough ask going into next week (against New Zealand).”