Galway Corinthians’ losing bonus point against Sligo moved them out of the bottom two in Division 2B, while Greystones have extended their lead at the summit to five points.

There were three away victories in round four, the most comprehensive of them being Wanderers’ 40-10 hammering of bottom side Malahide at Estuary Road.

Brendan Guilfoyle’s charges fell behind to a second-minute try, but two unconverted efforts from wingers Mick McGrath and Red Hansen had them right in the hunt.

The Dubliners have been the authors of their own downfall at times this season, and an interception allowed Wanderers through for a second try. However, Hansen sidestepped over in the corner on the half hour mark.

Crucially, the Chaps gave themselves some breathing space with a 10-point spurt, including an athletic charge-down try from flanker Lucas Culliton who pirouetted around a defender to score, to lead 22-10 at half-time.

A Mikey Russell try really knocked the stuffing out of Malahide’s challenge, ten minutes into the second half. Wanderers added their fifth on the stroke of full-time as they moved up to second in the standings.

Ballina stunned ‘Stones with two tries inside the opening seven minutes, both of them coming from interceptions as centre Ian West raced in from far out before number 8 Daniel Molloy powered over on the left.

The visitors forced the Moy Men to kick more than they would have liked, and they used the possession intelligently in return. Marmion, number 8 Danny Kenny and hooker Ntuthuko Mthembu were all prominent.

‘Stones fought back to lead 17-10 at the turnaround, wingers Con Callan and Ferdia Kenny both touching down – the latter benefiting from a very favourable bounce – either side of a Marmion penalty.

It was tit-for-tat during an exciting second half, Ballina replying with tries anytime ‘Stones threatened to pull clear. An Andrew Lynch-led breakaway earned the Wicklow men a penalty try and also landed Ballina full-back Darragh Whyte in the sin bin.

14-man Ballina had captain Luke Sweeney’s quick thinking to thank for a Billy McVann seven-pointer. A bout of Greystones pressure ended with Ferdia Kenny crossing in the 66th minute.

Marmion’s terrific touchline conversion stretched the margin back to 14 points (31-17), only for an ever-persistent Ballina to build through the phases and hooker McVann barged in under the posts.

Out-half Craig McCormick converted, setting up a grandstand finish with barely three minutes to go. But Marmion led by example with a clinching converted try, taking his season’s haul to 61 points.

Belfast Harlequins have moved up one place to third after handing Blackrock College their first defeat of the campaign. ‘Quins delivered yet more drama with an 80th-minute winner in a 22-20 bonus point success.

Neil Doak’s side put together a 13-man lineout maul right at the death, sending hooker Joel Dundas over near the right corner. Indeed, they bookended the Stradbrook tie with tries, as Jack Rainey had crossed in the fourth minute.

Blackrock’s robust scrum delivered a second half penalty try and set up Peter Quirke’s lead penalty in the 67th minute, making it 20-17.

In contrast, Harlequins relied heavily on their maul, one collapsed effort earning them a penalty try and Paddy McAllister, their player-assistant forwards coach, also scored from a pick-and-go after a big lineout drive had gone to ground. 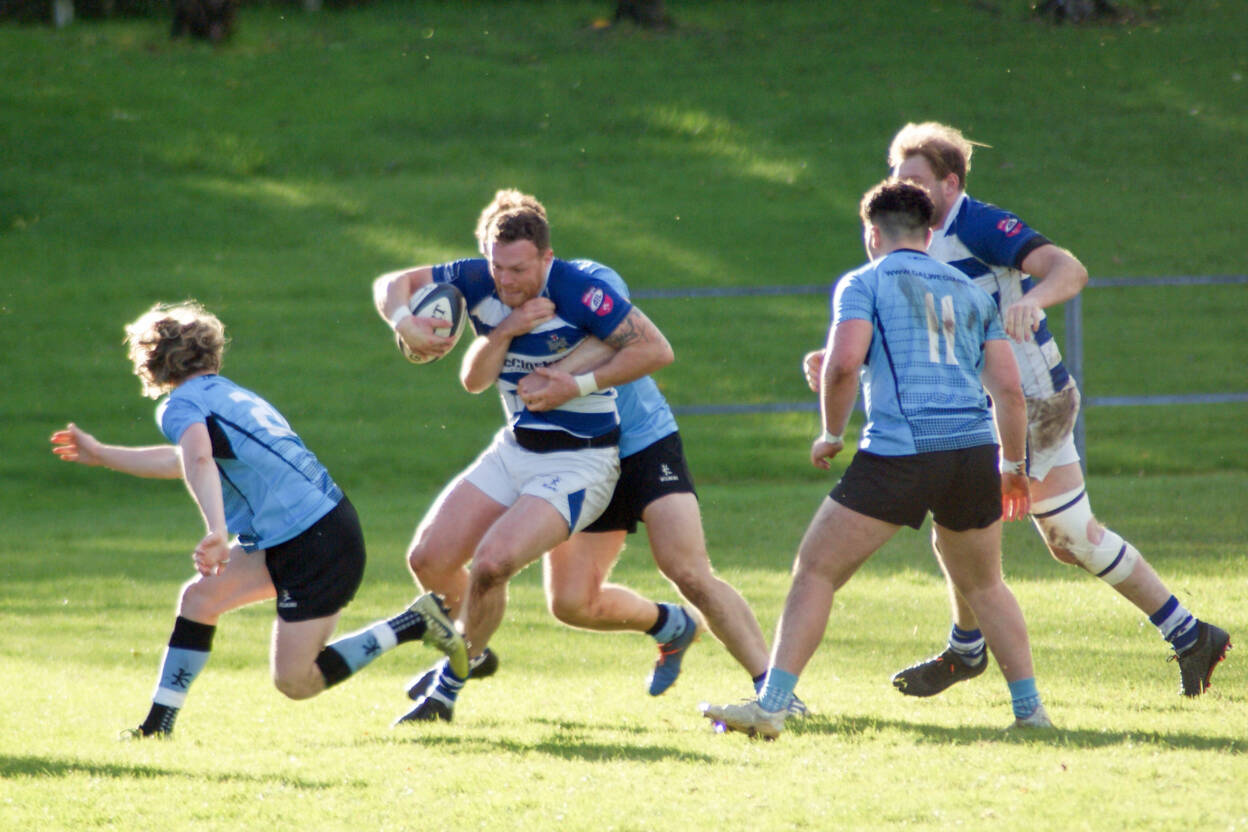 Back rower James McMahon broke through for a brace of tries as Dungannon returned to winning ways, accounting for Galwegians on a 42-19 scoreline at Stevenson Park.

Andrew Hughes’ charges had the bonus point in the bag by half-time, leading 27-7 after Galwegians had nipped ahead thanks to Conor O’Shaughnessy’s slick chip-and-collect effort in the corner, which he converted himself.

Former captain McMahon responded immediately, blocking down a box kick to score in the eighth minute. Jordan McIlwaine’s conversion and subsequent penalty took them ahead at 10-7.

During a period that saw O’Shaughnessy miss two penalties, Dungannon reeled off tries after 26, 32 and 38 minutes, skipper Andrew McGregor breaking out of the home 22 before Caolan Mulgrew sent McMahon over to complete his brace.

Wingers Mulgrew and McIlwaine soon extended the advantage to 20 points, and ‘Gannon kept the scoreboard ticking over in the second period with a McIlwaine penalty and a maul try from James Gamble.

‘Wegians gained some consolation during the final quarter with tries from replacement Adam Lambkin and lock Ben McGuinness, but the hosts sandwiched in their sixth try, prop Ross Stewart plunging in from another well-controlled lineout drive. 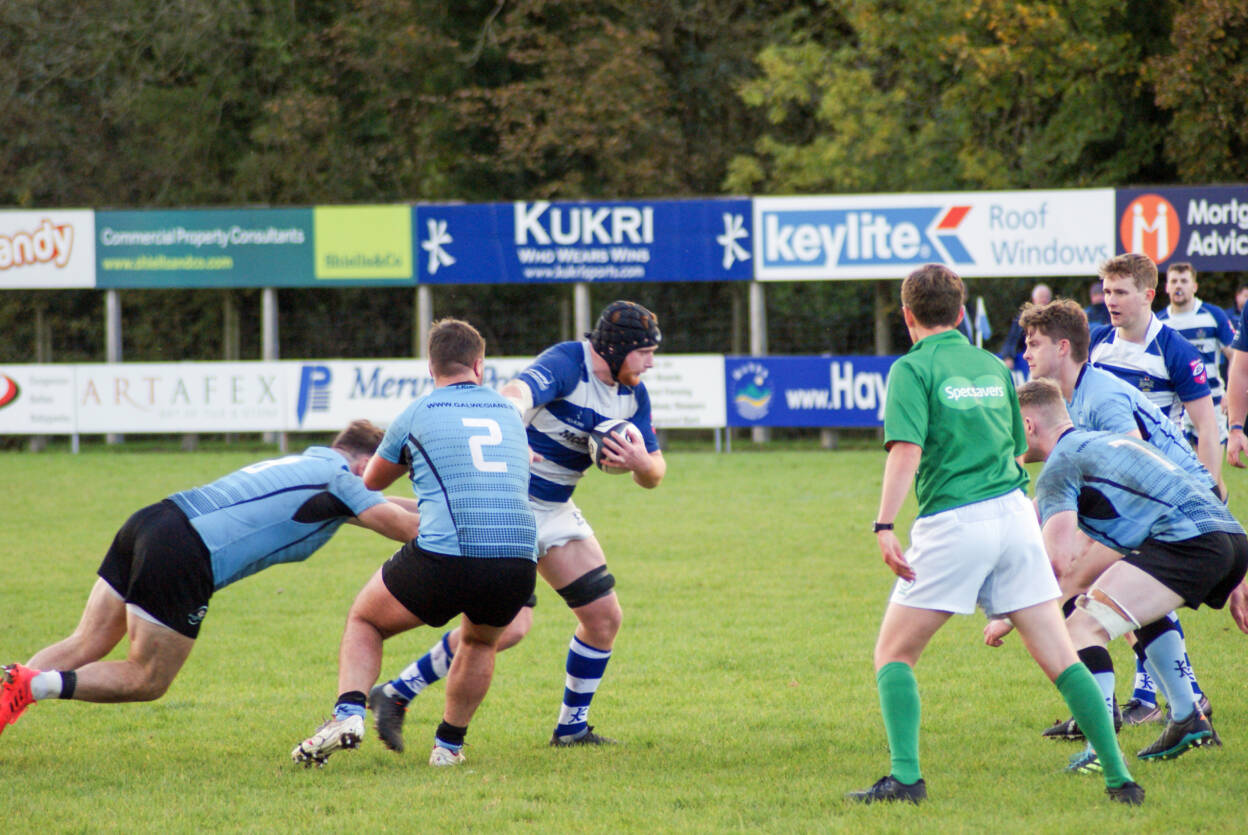 Dungannon head coach Hughes told the Tyrone Herald: “It was comfortable. We scored some really nice tries and it was one of those (games) that we played well, it was nice.

“We’ll take it because it’s not often that you’re sitting at half-time with a bonus point and you’re trying to keep guys from going off-script, to keep that focus on.

“The interlink between the guys, when we played our sets out, looked really, really sharp, especially when they played to their patterns, which was very pleasing.”

Sligo made it three wins out of four by holding off Corinthians in Galway. Out-half Euan Brown was in match-winning form, kicking 11 points in a hard-earned 16-12 triumph.

Josh Reeves’ men were all business at Corinthian Park, opening up a 10-point buffer with a Brown penalty followed by winger Calum Goddard’s well-finished try in the corner, the product of some fine handling from the backs.

Corinthians roared back, losing a key lineout but blocking down an attempted clearance. A kind bounce set up flanker Cathal Evans to touch down, and Dylan Keane supplied the conversion.

JP Cooney’s side went on to outscore the visitors by two tries to one, but they gave too many kickable opportunities to Scotsman Brown. He turned a scrum penalty into three points and a 13-7 half-time lead.

Sligo kept the pressure on, swarming through on the back of a brilliant Ross Hickey break. Replacement James O’Hehir went agonisingly close to a try, before Brown took the three points on offer.

Back came Corinthians, crashing over from a well-worked maul to make it a four-point game. Sligo, though, had a stranglehold of possession late on, with lock Matthew O’Hara impressing at lineout time.