Omagh and Midleton were the main movers in Energia Men’s All-Ireland League Division 2C, with the Academicals ending their losing run in emphatic fashion against Sunday’s Well. 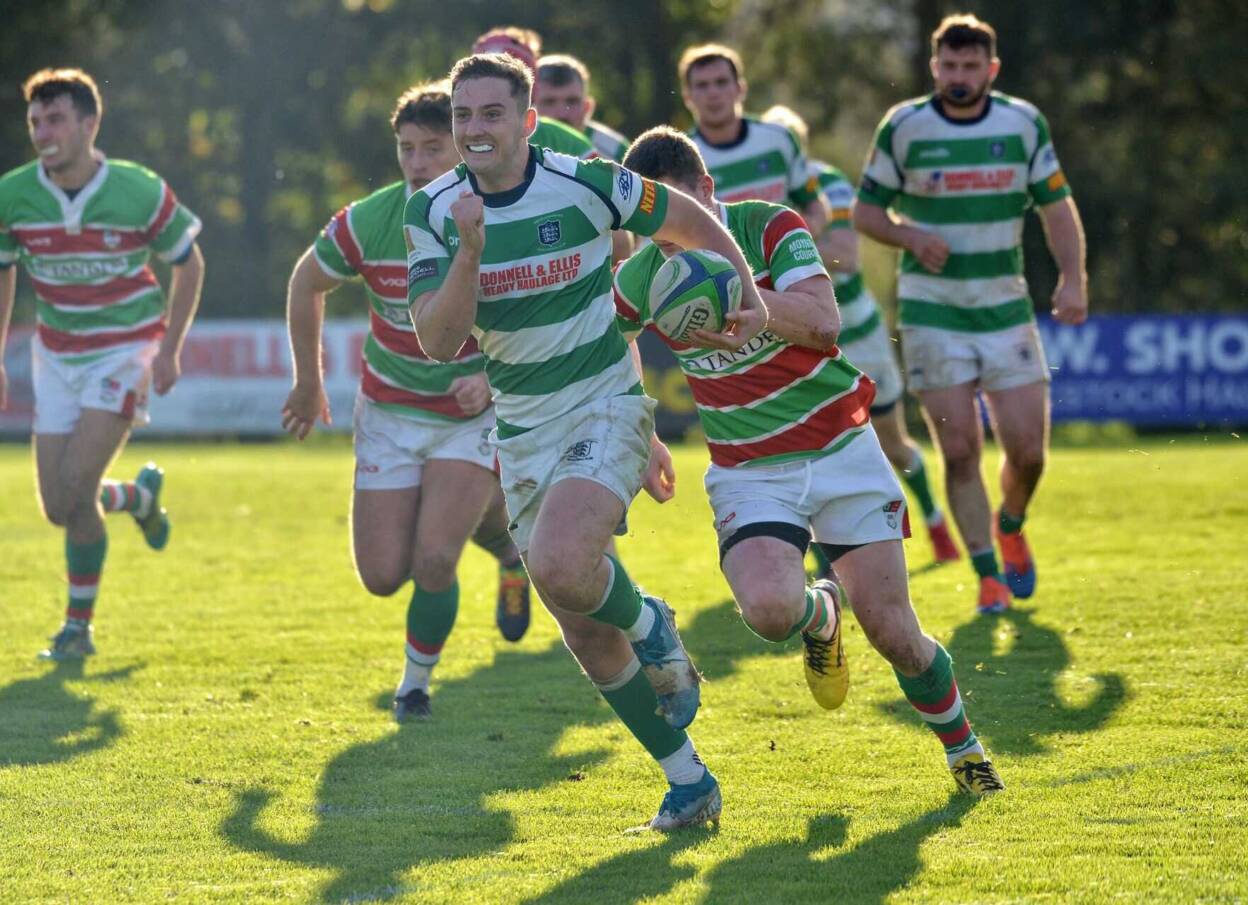 The omens were not good for Omagh when they knocked on from the kick-off, and a spritely start from Sunday’s Well saw them take a 3-0 lead at the Thomas Mellon Playing Fields, thanks to an Eoin Geary penalty.

The hosts also lost winger Scott Ballantine to injury, but a terrific team try, which was built from a turnover and finished by Scott Barr, got the Accies back on track in pursuit of a maiden win.

Indeed, they led 19-3 by half-time after scrum half Taine Lagan’s try from his own sharp break and a third effort from full-back Stephen Maclaine, who popped up out wide to finish a well-executed move from a lineout. 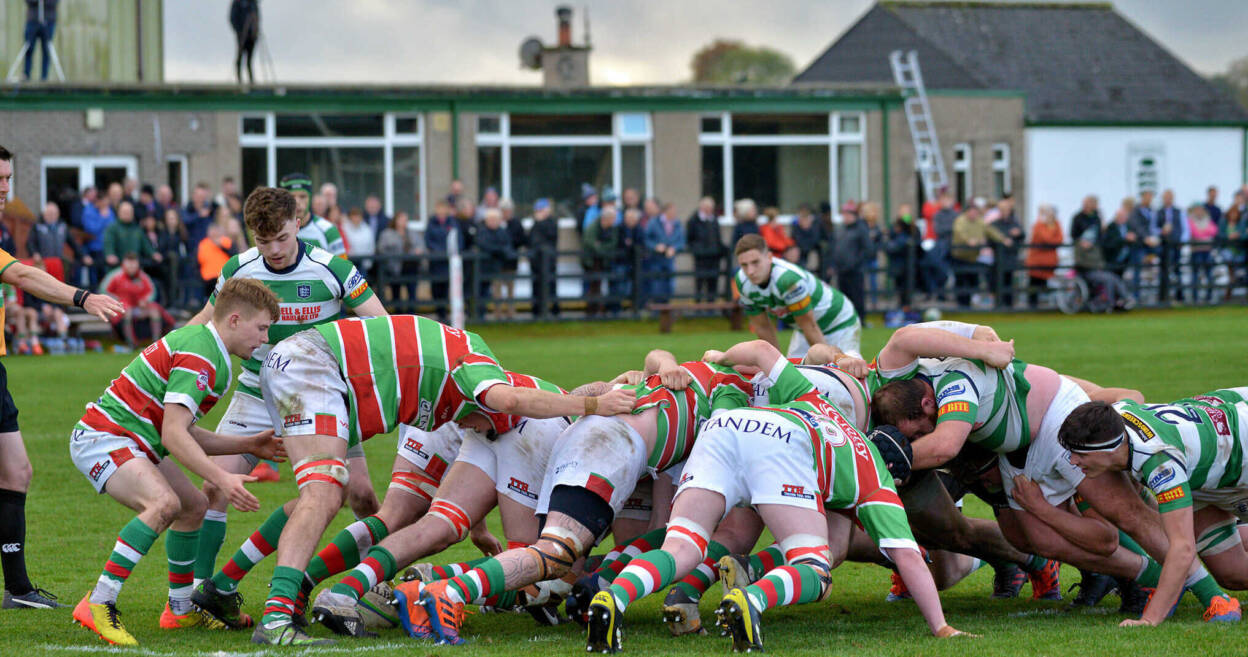 Lagan led the way for the Co. Tyrone side, tapping a penalty and beating three defenders to secure the bonus point. The ‘Well responded with a Ryan Buckley try, making it 24-8.

However, Omagh ensured they had firm control of the scoreboard again with an intercept try from Kyle Beattie, the out-half finishing with 13 points in all.

Replacement Ryan Armstrong expertly dribbled a dropped ball from the ‘Well through for try number six, and quick hands down the blindside released Ryan Mitchell for his fourth try of the campaign. 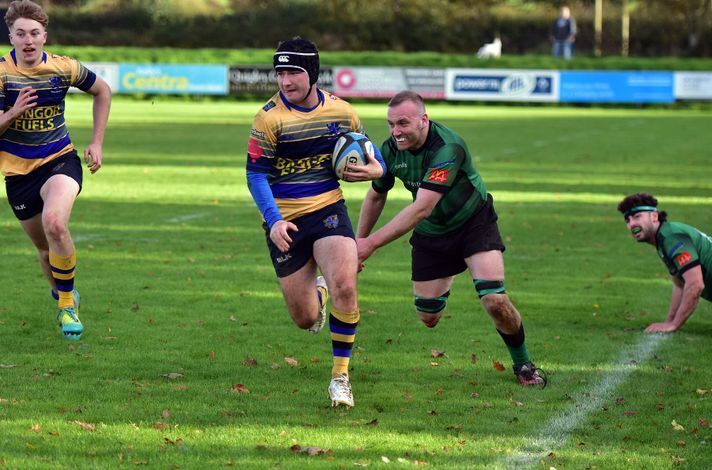 Omagh’s next opponents, Bangor, got the better of City of Derry, prevailing 23-16 in a typically hard-fought Ulster derby at Judge’s Road.

It was a harsh result for Derry to take given they had the better of possession, created more chances and held a seven-point lead with just 10 minutes remaining. But Bangor’s late show left the home side reeling.

The provincial rivals were locked level on six points each at half-time, with Rhys Larmour, taking Bangor’s kicks in the absence of Gareth Millar, and Derry out-half Alex McDonnell landing two penalties apiece.

Driven on by captain Neil Burns, Derry foraged into a 13-6 lead early in the final quarter, breaking the try deadlock with a dynamic counter attack that began back in their own 22.

The seven-point gap remained in place with Larmour and McDonnell swapping penalties, but Derry soon lost their lead and a player to the sin bin, as a collapsed scrum giving Bangor a penalty try. 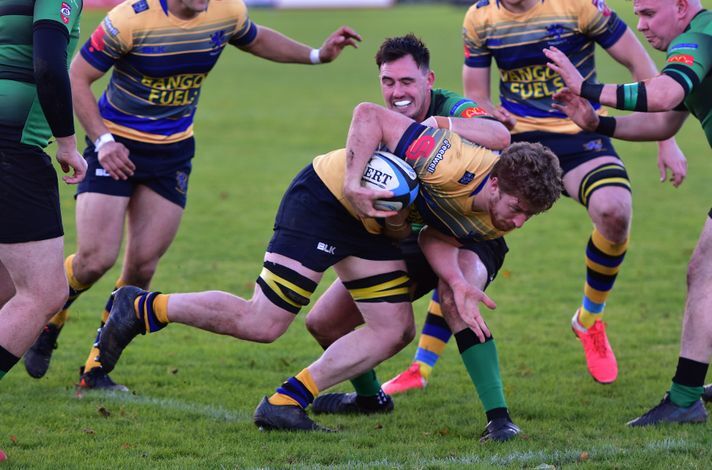 Not content with the draw, the Seasiders raided back downfield through Mark Widdowson, Ben Parker and Mike Ferguson. They made the extra man count when full-back Shay Storey ran in the decisive try.

Storey came up into the attacking line and darted through the home defence to score to the right of the posts. Larmour converted and Derry could not respond despite a spirited fightback in the final minute.

Enniscorthy, Skerries and Bangor are the three teams with four consecutive victories each. ‘Scorthy and the Goats are level on 19 points at the top of the table.

The Wexford men had their toughest test of the season to date, needing a late David O’Dwyer try, and a excellent conversion from out wide by out-half Ivan Poole, to edge out Tullamore 15-12 at Spollanstown.

Boosted by the return of Cathal Feighery, Matthew Murphy and Mark Kennedy to their pack, the Tulliers took advantage of Enniscorthy’s indiscipline to lead 9-5 at half-time.

It was four well-struck penalties from full-back Karl Dunne in the end, his accuracy from the tee giving the Offaly outfit a seven-point gap in a game the club livestreamed with VideosOnTheNet to great success.

Tullamore’s back row of Chris Whittle, Jack Delahunt and Barry Bracken were hugely impressive, dictating play at the breakdown. The home forwards also held up Enniscorthy twice before the break.

However, ‘Scorthy showed their battling qualities in a nail-biting conclusion. Their bench, including Ben Kidd and Brian Bolger, had the impact that coaches Ben Manion and Declan O’Brien desired.

Poole, who had touched down in the third minute, kicked a penalty with little over 10 minutes remaining and then converted winger O’Dwyer’s crucial score, which was set up by Kevin O’Connor and Kidd.

‘Scorthy assistant coach O’Brien told the Wexford People: “This was a big test for us today against an experienced senior side. We have got to realise that we are not going to score six or seven tries every time we play.

“I am very proud of the way our boys stood up, particularly during the second half, and found a way to win.” 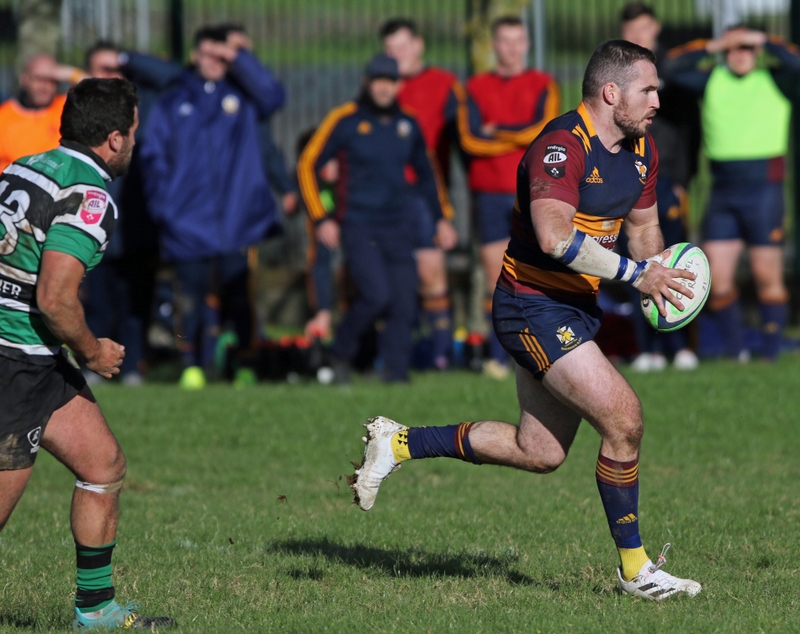 Manion’s men will certainly be battle-hardened for their top of the table clash with Skerries, who came away from Clonmel with a well-judged 24-0 bonus point victory.

Paul O’Loghlen’s cross-field kick played in Mark Oliver for a second-minute try, setting the tone for another strong performance from the visitors. They led 19-0 at the interval.

Skerries did not have it all their own way, as Clonmel held them up to deny them a maul try and the Dubliners also had a streak of indiscipline, losing hooker Kieran Leonard to the bin in for hands in the ruck.

Despite this, the hosts were left frustrated by turnovers and lost lineouts, and 14-man Skerries dented them further with a try from full-back Ronan Mulcahy. He added a second score late on.

Skerries’ patience was tested with their bonus point hunt. They had a try chalked off for a double movement, and it was not until the 70th minute that prop Cormac Marrey sealed the maximum haul. 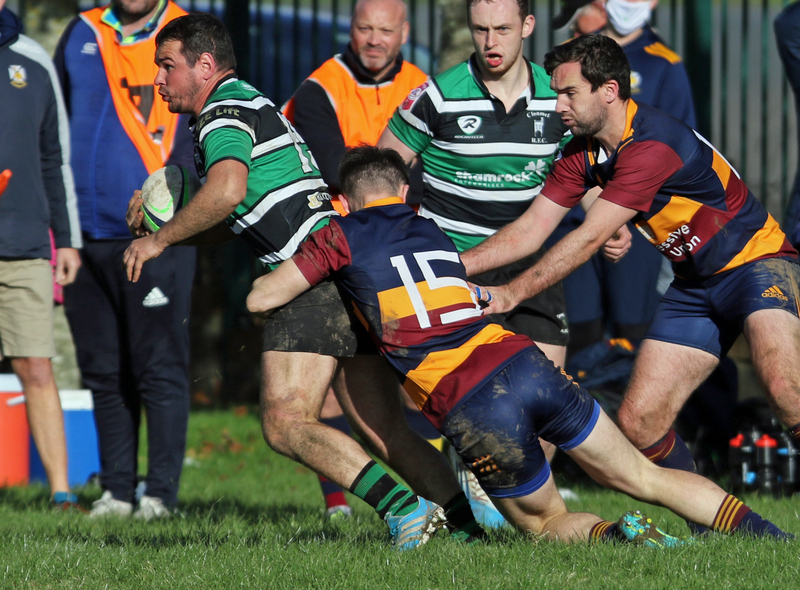 Midleton turned the screw down the final stretch to win their Munster derby clash with Bruff. Closing tries from Dave O’Sullivan and Shayne Anderson earned the Red Devils a 28-15 triumph.

Right winger Mark Fitzgerald was a key man for Bruff during the opening half, crossing for two tries as they took a 12-9 lead into the break.

His second one saw him race onto a smart kick through from out-half Andrew O’Byrne, but the latter’s opposite number, Stuart Lee, landed a trio of penalties to have Midleton hot on their heels.

The Corkmen were the stronger outfit when play resumed, having a couple of near misses for tries before Bruff lost captain Johnny Clery to the sin bin in the 55th minute.

Midleton responded with a power-packed lineout drive that had player-of-the-match Bryan Moore touching down for a Lee-converted try. Bruff’s Adam O’Dwyer hit back with a penalty.

That left the match tantalisingly poised at 16-15 to the home side, Midleton showing the necessary composure before they went for the jugular in the 68th minute when kicking a penalty to the corner.

What followed was a prolonged period of pressure on the Bruff defence, through lineouts, scrums and tap penalties, before flanker O’Sullivan managed to break the defensive line for a 73rd minute try, converted by Lee.

The icing on the cake was Anderson’s muscular effort, Midleton absorbing some promising forays from the Bruff backs before the outside centre battled past a number of defenders to score. 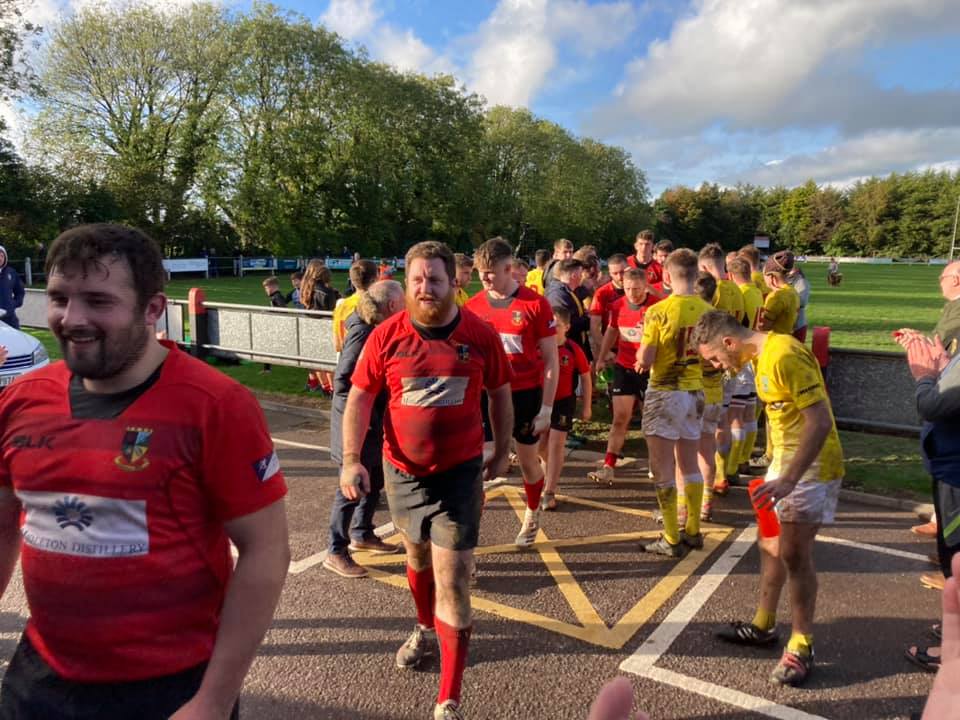