Nenagh Ormond won Division 2A’s Munster derby on Friday, and the three away clubs were all successful on Saturday in the third tier of the Energia Men’s All-Ireland League.

The match of the round was won by Queen’s University as they beat MU Barnhall 24-16 at Parsonstown. The unbeaten students have opened up a four-point lead at the top of the table.

Queen’s captain David Whitten led by example with a classy seventh-minute opener, scrum half Conor McKee setting him free from the edge of the Barnhall 22 after some smart link-up play from a ruck.

High quality tries were the order of the day, the Blues Bulls brilliantly striking from a long-range counter attack to add to Adam Chester’s 20th-minute penalty goal.

Eoghain Quinn set the wheels in motion for their opening try, backs and forwards linking nicely before Queen’s were stretched wide on the right and Chester kicked back across to the other side for Conor Lacey to touch down.

Ritchie McMaster and Chester exchanged late penalties, with Barnhall leading 11-10 at half-time, but Queen’s repeated their fast start from the opening half with an early converted score.

Versatile back Graham Curtis sped over, and despite the Kildare side answering back in the 68th minute, Queen’s showed their clinical edge again with the match winner just five minutes later.

Barnhall reduced the arrears to 18-16 after Lacey completed his brace, the ball being worked out to both wings before Quinn’s deft pass took out two defenders and put his back-three colleague away to beat the cover defence.

The table toppers rebounded in brilliant fashion, snatching the losing bonus point away from the Blue Bulls thanks to a closing score from hooker Chris Poole, fresh from the University’s recent Conroy Cup success. 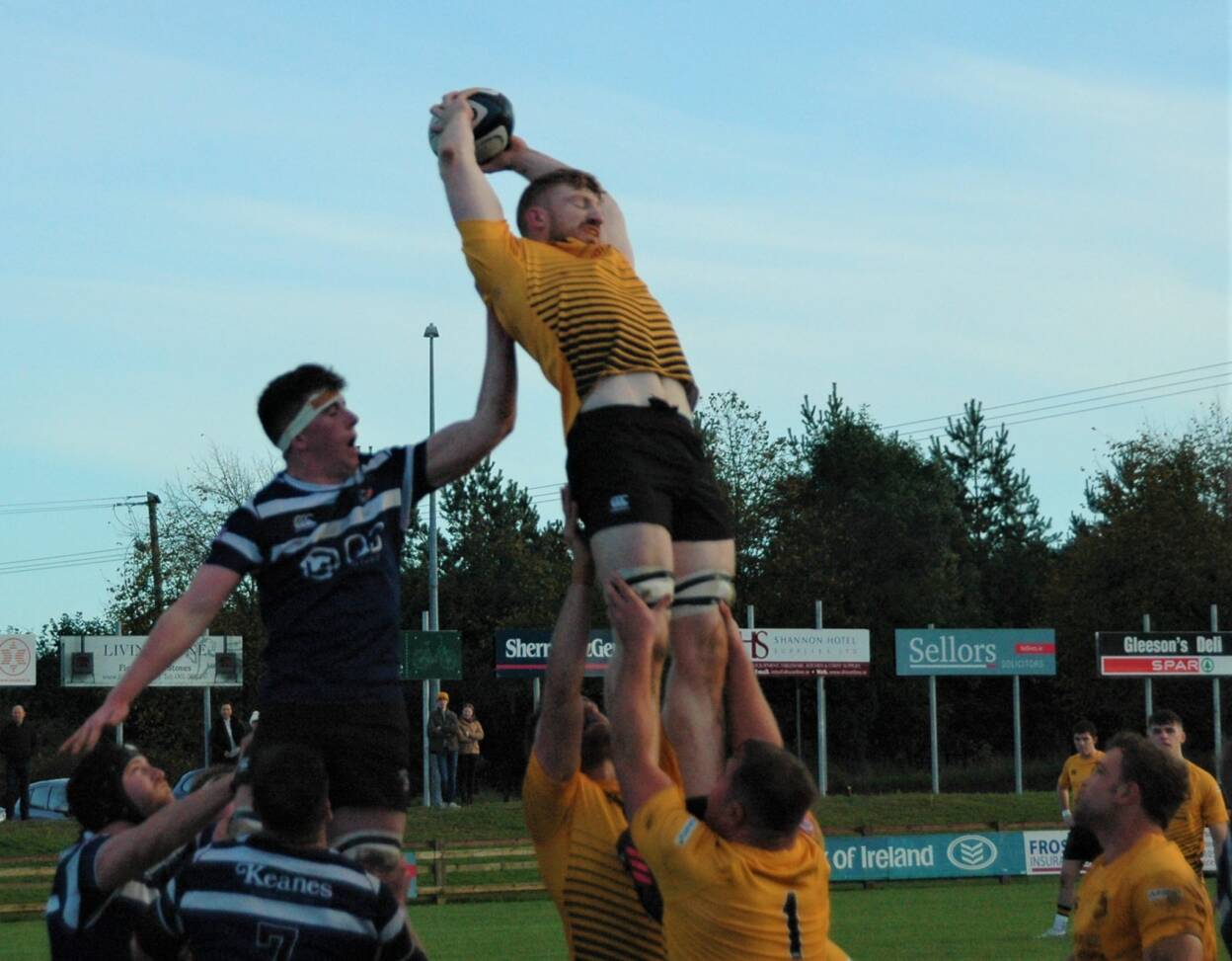 Buccaneers and Ballymena have joined Barnhall on 15 points, with third-placed Buccs not letting a 90-minute delay due to heavy traffic derail them as they ran out impressive 34-20 winners at Old Crescent.

The Pirates then put together back-to-back tries, Hanley’s cross-field kick finding Saul O’Carroll, a late call-up, for the first. Hanley swept over a terrific touchline conversion.

The visitors began the second quarter with another try, Ruaidhri Fallon chipping through for experienced centre Shane Layden to touch down and Hanley’s conversion extended the lead to 17 points.

Although Crescent lost winger Jack O’Mahony to the sin bin for a late tackle on Fallon, the numbers were soon evened up when Buccs prop Sean O’Connell saw yellow. 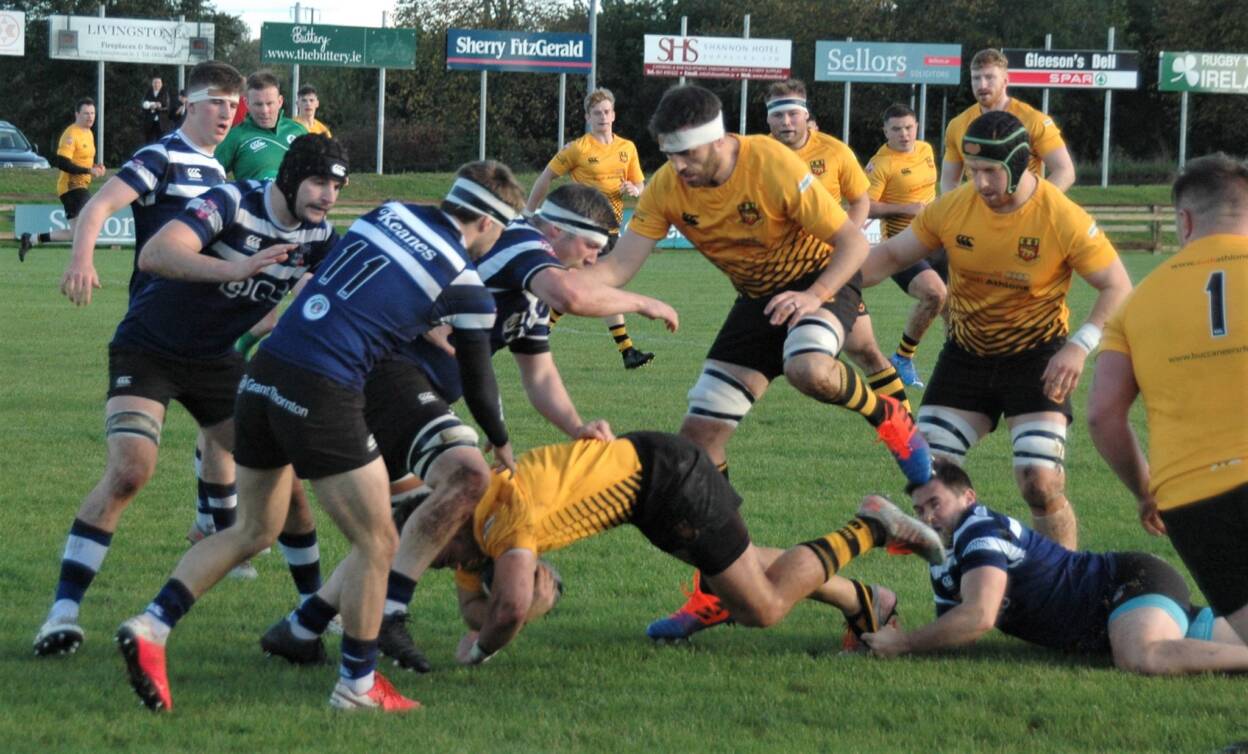 The hosts finished off a good spell with a Dan Hurley try in the 26th minute, converted by McKenna, and the pressure remained on Buccs who had lock Ruairi Byrne binned.

With the Pirates scrambling to stem the tide, Crescent closed the gap to 20-15 courtesy of a Kevin Doyle try. However, a superb solo score saw Buccs have the final say before half-time.

Thomas McGann intercepted and broke down the right wing before chipping over the last defender and winning the race to touch down. Hanley left the scoreboard showing 27-15 with another cracking conversion from out wide.

Despite some further indiscipline, which saw them conceded two more yellows, the Athlone outfit shaded the second half by seven points to five.

Recent Ireland Sevens debutant Shane Jennings made an impact off Buccs’ bench, threatening from his own kick ahead before scrum half Eoin O’Reilly was dispatched to the bin.

The killer blow for Crescent’s hopes came on the hour mark, as O’Carroll, Jennings and Fallon spearheaded an attack down the left and Layden was there in support to finish in style. Hanley added the extras to the bonus point score.

Jennings’ binning in the last minute preceded a consolation pushover score for Crescent, who are winless but competitive so far in their fixtures and will surely break their duck soon. 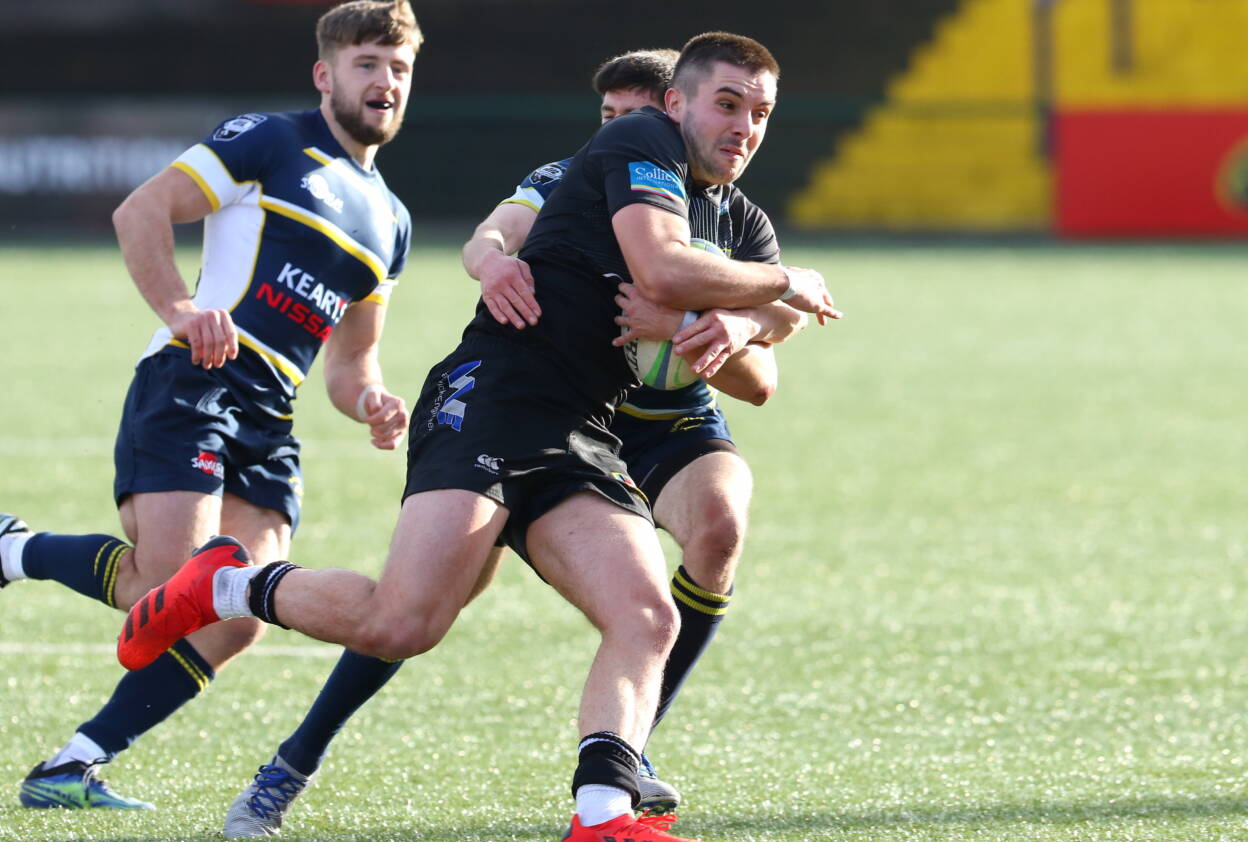 Meanwhile, Ballymena did most of the damage during the first half as they defeated Dolphin 26-20, picking up all five points at a sunny Musgrave Park.

The concession of three quick-fire tries proved too costly for Brian Scott’s men, who will take a lot from their fightback, which included a Sam Boyle try before the break and two more in a five-minute spell.

Two Ballymena yellow cards for James McNabney and Rodger McBurney opened the door for Dolphin’s Murray Linn and Cian Scott to touch down, suddenly making it a one-point game with 20 minutes left.

However, the Braidmen, who had led 21-3 at one stage, held up Dolphin on their own try-line before their teenage number 8 McNabney picked from five metres out and made it over in the corner.

Centre Pierce Crowe had claimed the visitors’ opening try, following a break and offload from Tim Small, and full-back McBurney took a pass from James Howe to go in under the posts and finish off a fine multi-phase move.

Winger Matthew Corr was next on the scoresheet, scoring his first try for the club. Stuart Donald released McBurney with an inside pass from a ruck and he turned a two-on-one into seven more points. 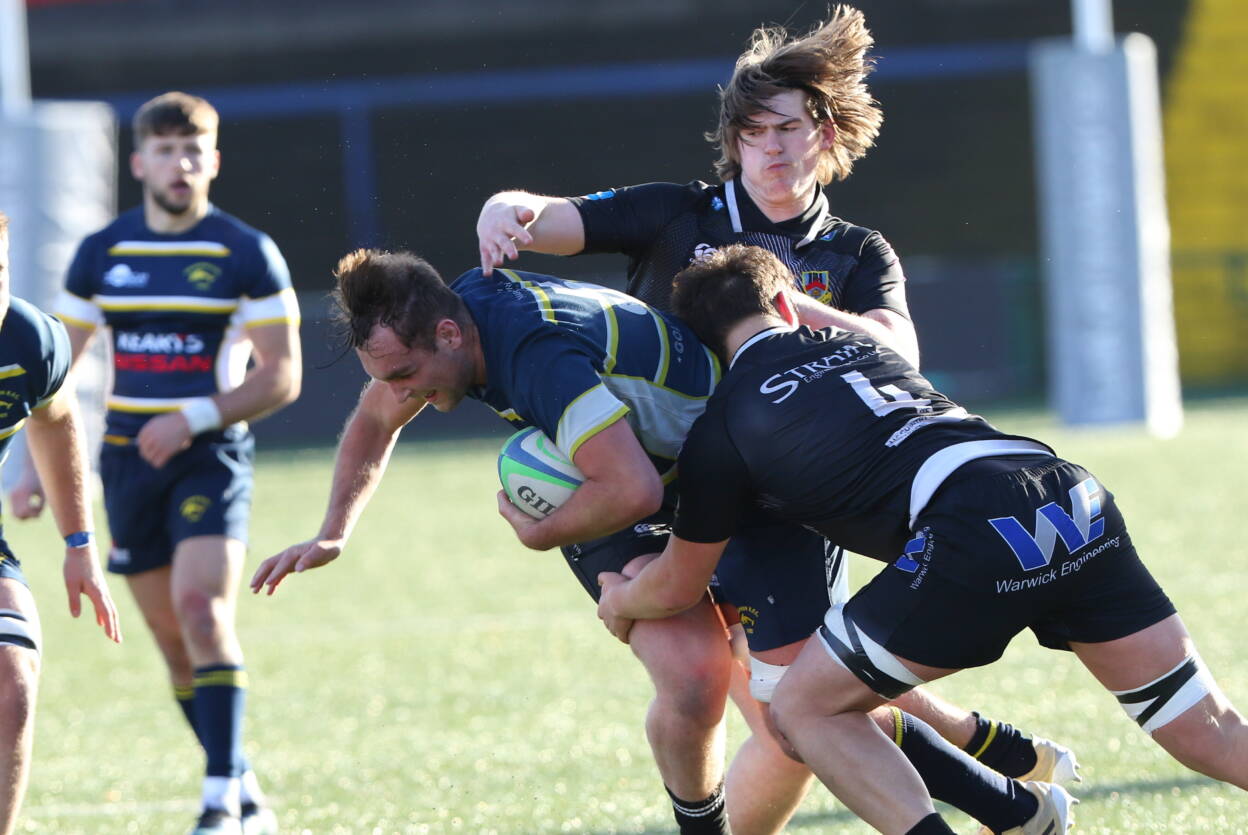 Nenagh Ormond chalked up their first victory of the campaign, getting the better of UL Bohemians on a 22-11 scoreline in Friday’s basement battle.

It was three tries to one in testing conditions, and the undoubted highlight was the middle score from winger Peter Coman who flew clear down the left after a fantastic tip-on pass in midfield from Fionn McGibney.