The Ireland Under-18 Clubs team, sponsored by PwC, were given a sound beating by Italy who scored seven tries in a runaway 41-10 victory at the Stadio di Monigo in Treviso.

Coached by Roberto Santamaria, the Italy Under-18s showed that their August win away to England was no fluke with another impressive performance, hitting Ireland with 36 unanswered points.

However, Italy edged into a 12-10 half-time lead, picking up a late penalty try – Kyle Read conceded it for a high tackle and was sin-binned – to supplement a superb solo effort from Lorenzo Casilio.

The hosts’ powerful pack got on top in the second half, and they used their pace out wide well. Captain Jacopo Botturi crossed the whitewash, along with Valerio Siciliano, Marcos Francesco Gallorini, Nicholas Gasperini and Marco Scalabrin. 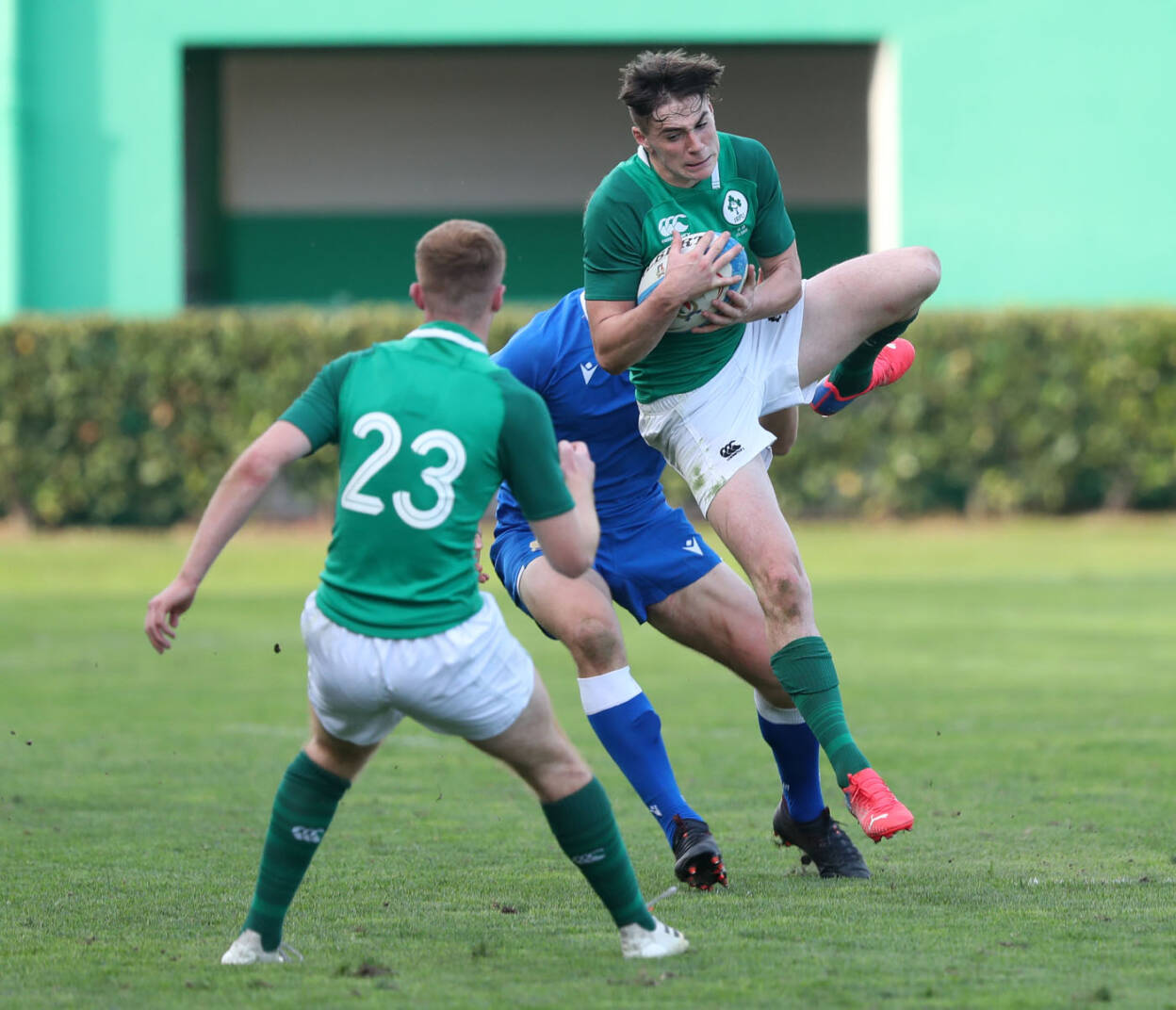 Ireland applied the early pressure from a series of penalties, their maul gaining ground before a forceful carry from Palmer, with Paddy Jones adding his weight, earned the number 8 the opening try.

Larke converted to the left of the posts, and although winger Hugh Gavin showed some nice touches out wide, it was Italy who struck next to break up the game’s first scrappy spell.

From a scrum near the right wing, an 8-9 move released Casilio through a gap and the Wasps Academy player showed impressive pace to get past Ethan Graham’s tackle and score in the corner.

The try went unconverted and Ireland managed to hit back in the 27th minute, Larke lofting over a well-struck penalty from the Italian 10-metre line after good work at the breakdown by captain James O’Loughlin, who soldiered well throughout.

The points were tempered by the sight of Naas centre Charlie Sheridan hobbling off injured. The Italian backs came to life towards the end of the opening half, in particular full-back Tommaso Simoni. 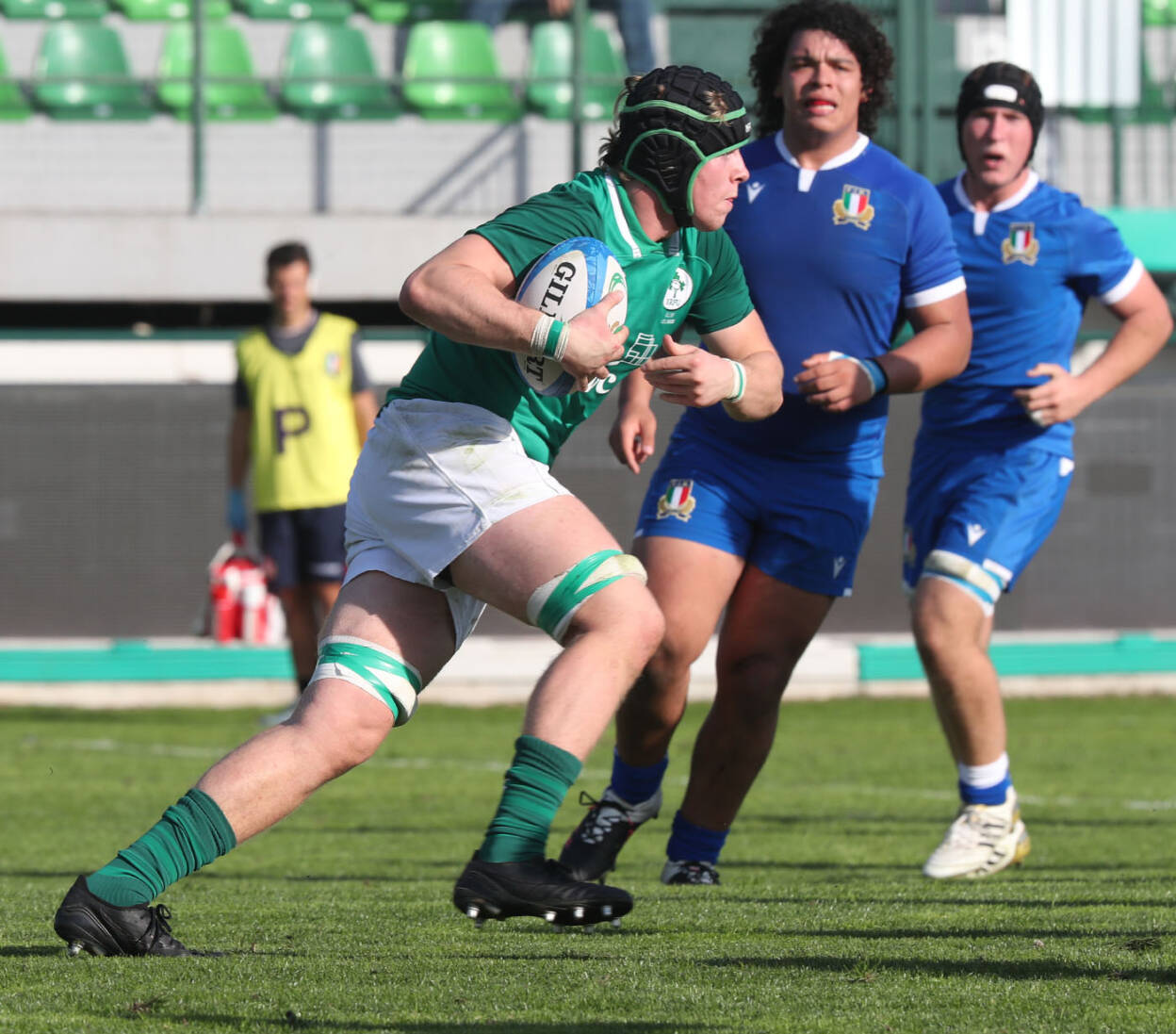 He was involved in a pacy break with Nicola Bozzo, and then it was his speedy late surge from inside his own half which set up the penalty try.

Simoni got past replacement David Donohue and offloaded to Casilio who was caught high by his opposite number Read just before the try-line. Italy were awarded a penalty try and Ireland were reduced to 14 men.

Disappointingly, the second half was one to forget for Ireland. It begin with a knock-on from the restart and Larke had to react quickly to deny Casilio a try from his own blindside break and chip.

Leonardo Antonio Sodo’s long-range break kept the home side on the front foot, and from a subsequent lineout drive, tighthead Gallorini broke off and burrowed over despite the best efforts of covering full-back Graham.

Simoni’s conversion had the scoreboard showing 24-10, but Ireland responded well with Jones and the front row replacements, Ballina’s Sean Hopkins in particular, punching some holes with their carrying. 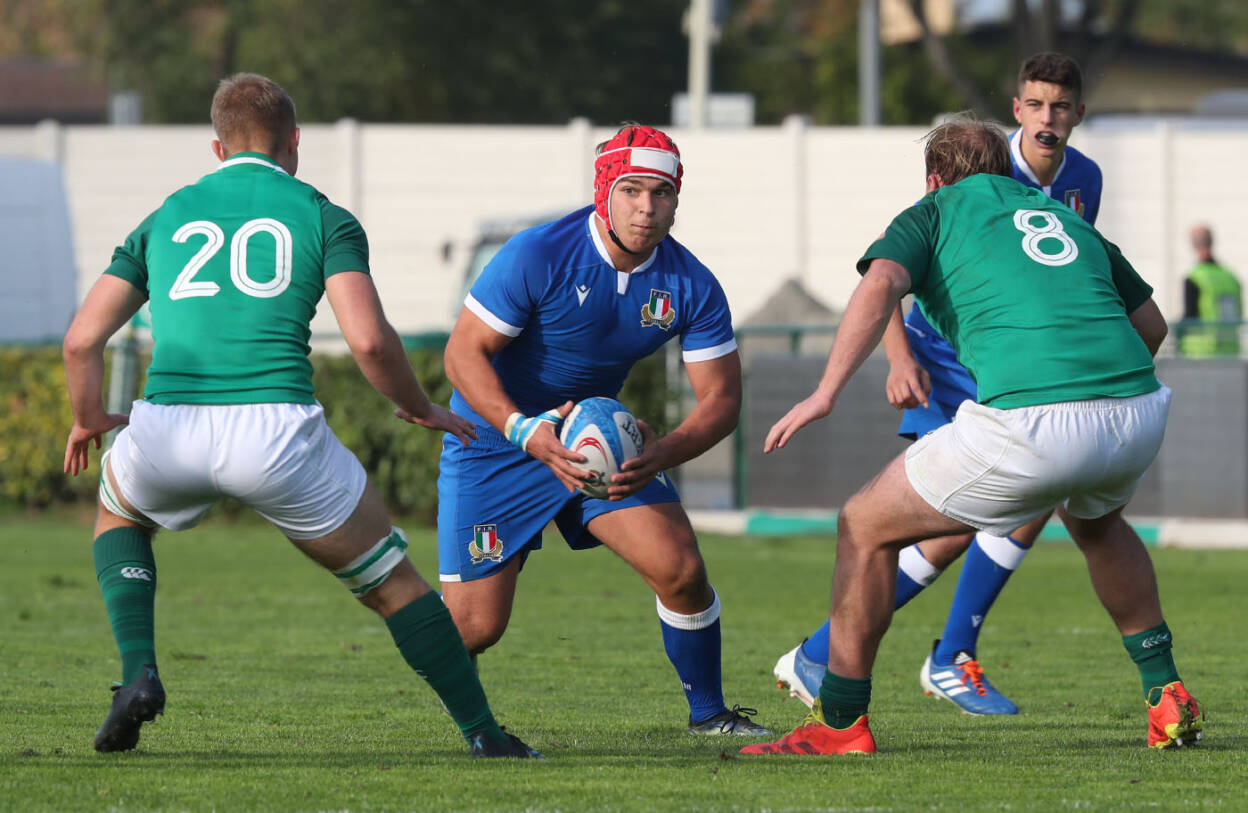 Ireland began to leak penalties in the scrum, though, and one on the hour mark set up a well-worked lineout move as Botturi plunged over by the left corner flag. Simoni added an excellent conversion.

O’Connor’s charges responded with their best attack of the afternoon, quick ball from a scrum allowed Larke to send Graham through the middle on a weaving run, for a gain of over 30 metres.

Athy’s Andrew Doyle was the link man and fellow replacement Kieran Kennedy and Sean Edogbo also got their hands on the ball, taking Ireland back into the Italian 22.

The Azzurrini defended the danger and again showed how clinical they are on the break. Bozzo charged downfield and despite Senan Phelan intercepting his pass, a resulting penalty paved the way for replacement Gasperini to score from close range.

The home crowd were loving the sight of Italy flooding forward and they did so again, two minutes from the end. Lorenzo Morini stormed up the left touchline and good passes out to the right put fellow replacement Scalabrin over.