Fresh from their opening wins, Galwegians and Wicklow are on their travels in the Energia Women’s All-Ireland League, heading to Belfast and Limerick respectively.

Preview: Cooke welcome back captain Aishling O’Connell and top try scorer Naomi McCord from injury, although the unavailability of some other players means a notable positional switch for Beth Cregan.

The Ulster skipper moves from the back row to scrum half, the position she first began playing rugby in. Cooke are bidding to bounce back from a disappointing 66-0 defeat to Blackrock College.

“The final result was really disappointing,” admitted Cregan. “Blackrock were just too clinical on our errors. We were really competitive for the first half and created opportunities which we should have finished.

“So that’s the focus this week to ensure that we keep that pressure on for the full 80 minutes and take the chances that are on offer.”

Sorcha Mac Laimhin reverts to the second row, while Coral Lapsley makes her full AIL debut at outside centre. Tamzin Boyce reclaims the right wing spot and Helen McGhee is redeployed to number 8.

Cregan continued: “‘Wegians always bring that physical battle up front but also have incredible experience in their backs, so it will be a really good challenge for us.

“We’re aiming to continually develop in these next few games, wins will come when the performance is there. Home wins are always vital in any competition and ensuring you score tries when the opportunity comes.”

Meanwhile, Connacht youngster Faith Oviawe is set to make her AIL bow off the bench for Galwegians. The Blue Belles have an extra pep in their step after last week’s 17-12 victory at home to Suttonians.

Captain Mary Healy slots back in at scrum half, and ‘Wegians’ will have to rejig their back row with their Ireland call-up, Grace Browne Moran, away at national camp this weekend.

Team manager Lisa Anglim commented: “We were delighted to get the win last weekend but our sights turn to what is always a difficult fixture away to Cooke. They always play well at home and we will have to improve on our performance last week if we are to get a result.

“Some notable performances from the Suttonians game were Fiona Scally, Orla Dixon and Mairead Coyne who had a great day with the boot.

“Two of our tries came from well-judged kicks from Mairead, which were gathered by Megan Walsh and Maria Gorham respectively.”

Match Cancelled – Please note that due to Covid-19 concerns, the match between Ballincollig and Railway Union has been cancelled.

As per the IRFU Rugby Committee decision on Covid-19 affected games, the match will not be replayed and each team is awarded two league points with a 0-0 score being applied.

Preview: There is huge excitement in both camps as Ballincollig and Railway Union prepare to play each other for the first time. It will be a meeting of ‘old friends’, as John Cronin explained.

“We’ve lots of connections with Ballincollig. It’s our former club captain Vinnie Browne’s home club and he’s back there now, coaching and playing,” said Cronin, the Railway director of rugby and head coach.

“Clare Coombes and Meaghan Kenny, who were really valued at Railway for five years and are great friends of ours, moved to Cork and have transferred to Ballincollig. We’re looking forward to seeing them and their families too.

“It’s strange when the player leaves, as you miss the parents as well.  They go from being a part of the club, where you meet them every week for years during their daughter’s time at the club, to suddenly being gone too.

“Denis (Stevenson), the Ballincollig director of rugby, is also a good friend of mine for many years now yet it’s the first time we have teams against each other! The first of many, I hope.”

Talented Munster young gun Chisom Ugwueru is poised to make her AIL debut as a replacement. Cronin is ‘not expecting a drop in standards, as the athletes coming in are more than capable’.

“It’s a great opportunity for them to continue their development and press for places. We were reasonably happy with the result against Bohs, though not necessarily happy with all aspects of our performance.

“Our discipline, lineout, and our control wasn’t at the level we would aspire to,” he noted, even though the Sandymount side managed to finish a full 27 points clear of UL.

Meanwhile, with injuries beginning to stack up, Ballincollig’s Stevenson has praised the players who have stepped into the breach. “They’ve done a very good job and will help the squad grow through the season,” he said.

“We’re going to be playing the strongest squad in the league tomorrow in Railway. We expect them to be as tough as Old Belvedere, but we have set our sights in year one to be competitive in the league.

“Hopefully that will lead on to being able to challenge the likes of Railway in the following two seasons. Playing all the clubs in the AIL this first season is giving us huge experience.

“You have to remember that most of our squad are new to this level and we’ve started off so well that we look forward to playing every week.

“We’ve noticed the difference in both pace and S&C in the AIL from where we have come from, but this will only benefit us into the future.” 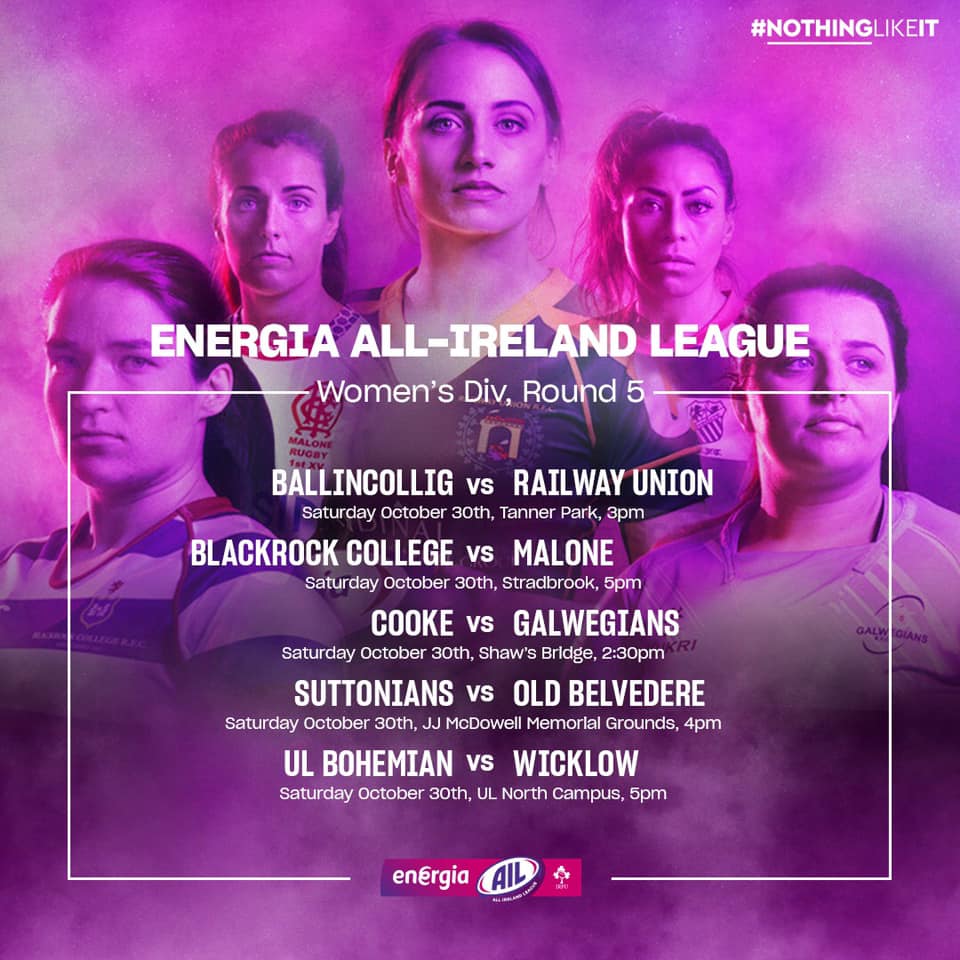 Preview: On the back of a strong recent Interprovincial campaign with Connacht, back rower Ciara Farrell has been brought into the Suttonians squad by head coach Stephen Costelloe.

Speaking ahead of tomorrow afternoon’s Dublin derby, he said: “We welcome Ciara into the squad. She was very good for Connacht during the Interpros and has been in great form for her parent club Tullamore.

“We have lost (hooker) Julia O’Connor to a broken hand unfortunately. Sophie Gibney returns at full-back. To keep fighting last week and get within a score of Galwegians at the end was fantastic.

“Carrie O’Keeffe was everywhere on the park and put in a Trojan amount of work, Mary Healy made a fantastic impact when she came on and really got us going forward. Great talker on the pitch too.

“(Our captain) Lauren Farrell McCabe too was driving players around the park, she always wants to be on the front foot. We have threats all over the park and we want to use them effectively.”

Key areas for improvement for the Tribe outfit are making sure they make their first-up tackles, especially with Belvedere’s attack looking particularly sharp of late, and winning the collisions.

Costelloe continued: “I think we can put a performance in against anyone, we have a quality group of players. The next two games are against two of the best in the country (Old Belvedere and Railway Union).

“It’s going to be tough but these are the games, as players and coaches, that you relish. I said before we are in a transitional phase. In a win, draw or defeat we achieve and learn.”

Meanwhile, Old Belvedere head coach Johnny Garth has made four personnel changes to the team that ran out emphatic 75-point winners at home to Ballincollig in round four.

International duo Sene Naoupu and Kathryn Dane are absent this week after providing some second-half star dust against Ballincollig. However, former Ireland out-half Hannah Tyrrell is pencilled in for a possible return off the bench.

Preview: Blackrock College are chasing their fourth straight victory, and top spot following the cancellation of Railway Union’s game. Heading into the international window, ‘Rock captain Michelle Claffey says it is a case of opportunity knocks for the wider squad.

“We have a lot of changes due to the 15s and Sevens commitments this week,” she explained. “We’re very excited to welcome Malone to Stradbrook, we’re expecting a very strong performance from them.

“We have four forwards in the Ireland squad for November, it’s a loss but it allows others to step up and get the responsibility of managing the game. We have plenty of experience in the pack and interpro players like Aoife Moore, Christy Haney, Mairead Holohan and Meadbh Scally.”

Another experienced head is former Ireland back Jackie Shiels. The 36-year-old Meath woman has moved between inside centre and out-half, with Claffey acknowledging that she is a key figure in making sure standards do not drop in the absence of the internationals.

“The goal for the next few rounds is to show that we have a solid squad that we can select from, there is no drop in standards. Jackie has brought experience to the team in driving standards and executing our roles.”

Claffey and Shiels are joined in the back-line this week by Natasja Behan, Caoimhe O’Callaghan, Munster’s Ciara Scanlan and Cork-born scrum half Laura ‘Nugget’ Delaney.

Malone shipped two sizeable defeats to Blackrock during the 2019/20 campaign, including a 33-12 reversal at Stradbrook. It was seven points apiece at half-time before ‘Rock pulled clear.

Losing away to newcomers Wicklow last week was a setback for Peita McAlister and her team-mates, and they will no doubt be smarting from that result. Jamie McMullan will be expecting a big reaction from his charges.

Preview: Wicklow will be wary of a UL Bohemians side that is sure to want to right the wrongs of last week’s frustrating 37-10 loss to title rivals Railway Union. Munster captain Sarah Quin notched Bohs’ only try.

The league newcomers have been basking in the glow of that historic first win in the competition – a hard-fought 12-7 success at home to Malone – and received a further boost with young full-back Ella Roberts’ call-up to the Ireland squad.

Before heading into national camp, Roberts told Irish Rugby TV: “Just having homegrown talent is super important for growing the game, especially in a club like this. We’re not a Dublin club, we rely on players around the local scene.

“I think getting the win against Malone was just what we needed. We had the fire in our bellies. We had a tough start, playing the top three teams which was hard, but I think we definitely grew from it and learned.

“I think against Malone, fair play to them, it was a hard game but we toughed through it at the end. I’ve been lucky enough to be called into the Irish set-up, so I’m super excited for that and just raring to go.”

UL head coach Niamh Briggs has promoted five players from the bench, including Lily Brady, Laura Delaney and Michelle Ring in the tight five. Ireland international Fiona Reidy shifts across to the loosehead side of the scrum.

There are also positional switches in the back row, Kerry woman Edel Murphy packing down at number 8 and Clodagh O’Halloran and Sarah Garrett fill the flanker roles this week.

The Red Robins will field a rejigged back-line, still led by Nicole Cronin, the league’s joint-top points scorer currently with 35 points. Skibbereen youngster Abbie Salter-Townshend gets an opportunity to impress at scrum half.

Helen McDermott makes the move to full-back, Aoife Corey will don the number 13 jersey tomorrow, and there are starts in the back-three for Rebecca O’Shea, fresh from scoring two tries for UL’s seconds against Waterpark, and Louise Costello.

Naoise O’Reilly covers for Roberts at full-back in a much-changed Wicklow selection. Aoibhin Stone and Alexandra Dalton complete an all-new back-three, with Sarah Gleeson, the scorer of the match-winning try against Malone, moving to out-half.

Stradbally native Robyn Mullen, a strong ball carrier and accurate thrower, will start at hooker, with co-captain Amy O’Neill backing her up from the bench.

Laura Newsome, Caitlin Griffey and Nicola Schmidt are the final changes made by head coach Jason Moreton. Schmidt joins her sister Jessica in the back row.