Ballina and Malahide are the only teams without a win so far in Energia Men’s All-Ireland League Division 2B. Two of the top three sides, Greystones and Wanderers, pay them a visit in round four.

It seems wherever Ballina go, the drama follows. Despite Calum Quinn’s fifth try of the campaign at Belfast Harlequins, a last-gasp drop goal denied them a maiden win.

The odds are stacked against the Moy men overturning Greystones tomorrow given the visitors’ recent run of results. Three bonus point wins and 127 points and 19 tries scored.

Greystones were 47-17 winners when they entertained Ballina during the 2019/20 season. Even if their try-scoring rate dips, they have captain Killian Marmion (45 points) in dead-eye goal-kicking form.

Blackrock College may not have the scoring might of Greystones, but they have shown match-winning nous in the first few rounds. Their maul provided the platform for all three tries at Galwegians last time out.

Their spate of sin-binnings cannot be repeated, though, and ‘Rocks coaches James Blaney and Stan McDowell will be hammering this home. Especially with Harlequins having kickers of the calibre of Paul Kerr and James McKinney.

The Belfast club’s followers have been getting used to tense finishes, with winning margins between one and four points in their games to date. Centre Kerr has kicked 23 points so far. 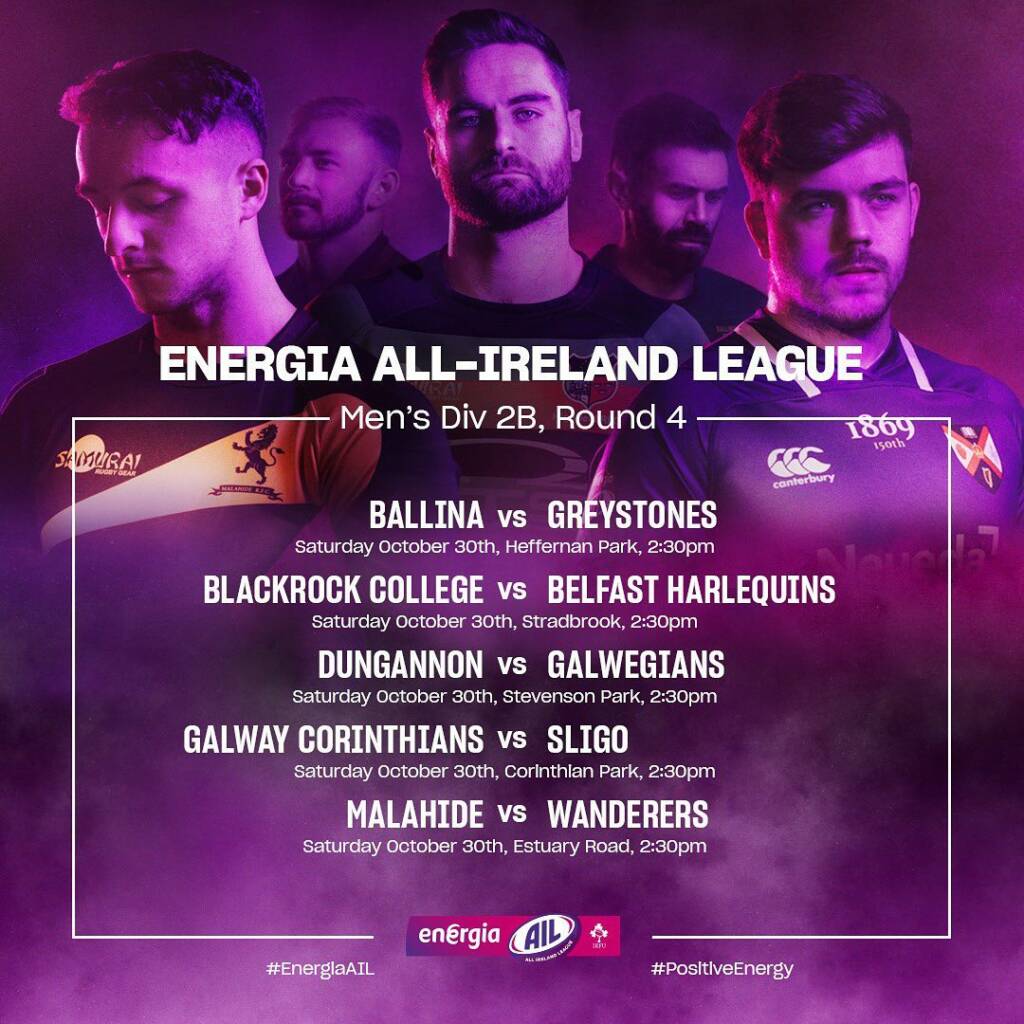 Dungannon returned home from playing Wanderers on the Aviva Stadium’s main pitch with a well-deserved losing bonus point. The Russell brothers, Sam and John, have contributed half of ‘Gannon’s eight tries so far.

They went without a win in their two 2019/20 clashes with Galwegians, losing 17-0 at home and drawing seven-all away. Conor O’Shaughnessy, Christy Reilly and Kieran Downey were part of that first ever ‘Wegians victory at Stevenson Park.

It is hard to judge Ja Naughton’s current ‘Wegians side on their last two performances, both against high-ranking Dublin clubs. They started the league season with a dozen debutants, including Connacht Under-19 scrum half Kelvin Langan, a recent try scorer.

The division’s mini-Connacht League intensifies with Sligo visiting Galway Corinthians tomorrow before hosting Ballina next week. JP Cooney’s Corinthians have ground to make up after a disappointing outing against Greystones.

They have positive recent history against Sligo, winning 19-17 last month thanks to a late Dylan Keane penalty. They also did the double over them in Division 2B in 2019/20, triumphing 24-8 at home.

However, Sligo will not be lacking in confidence after beating Dublin opposition at home for the second time this season. Their Scottish out-half Euan Brown took his league haul to 29 points, as they overcame Malahide.

The first Dublin derby in the division sees Wanderers visit a Malahide side struggling for results. On paper Malahide have a squad to challenge others, especially with the experience of Mick McGrath, Dominic Day and John Shine.

Judgement will have to be reserved though, as they have had tough set of fixtures. Eoin Sheriff’s Wanderers are the fourth team they will have faced that are currently in the top half of the table.

The Chaps have put together back-to-back bonus point victories, scoring 12 tries in the process. There have been two tries each, in those games, from backs Conor McQuaid, Eoin O’Shaughnessy and Martin O’Neill.