City of Derry are hoping Neil Burns and Simon Logue can make a timely return to action, with two of their in-form backs, Paddy Blennerhassett and Calum O’Hagan, both unavailable for this Ulster derby.

Buoyed by their victory at Sunday’s Well, Derry have revenge on their minds after suffering a 44-7 Ulster Rugby Premiership defeat at the hands of Bangor last month.

It is so far, so good for Bangor with three straight league wins. Director of rugby Tom Rock acknowledged: “When I arrived two and a half years ago, I was told that we had around 18-20 lads capable of playing AIL rugby. To develop to a point where I would now say it’s double that number, is really pleasing.”

Clonmel climbed two places up to sixth following their second draw of the campaign. Their execution was much better against Bruff, as evidenced by John Gallagher’s terrific offload to set up the levelling try for Tony Cantwell.

Luke Noonan and Aidan Hickey are hoping to get more end-product from the back-line, but this is Clonmel’s stiffest challenge yet as second-placed Skerries are averaging 32 points per game.

Skerries captain Kevin McGrath is leading by example with four tries so far. The Goats won 13-12 in a real mud-bath at Ardgaoithe in January 2020, despite having scrum half Eoghan Carron sent off. 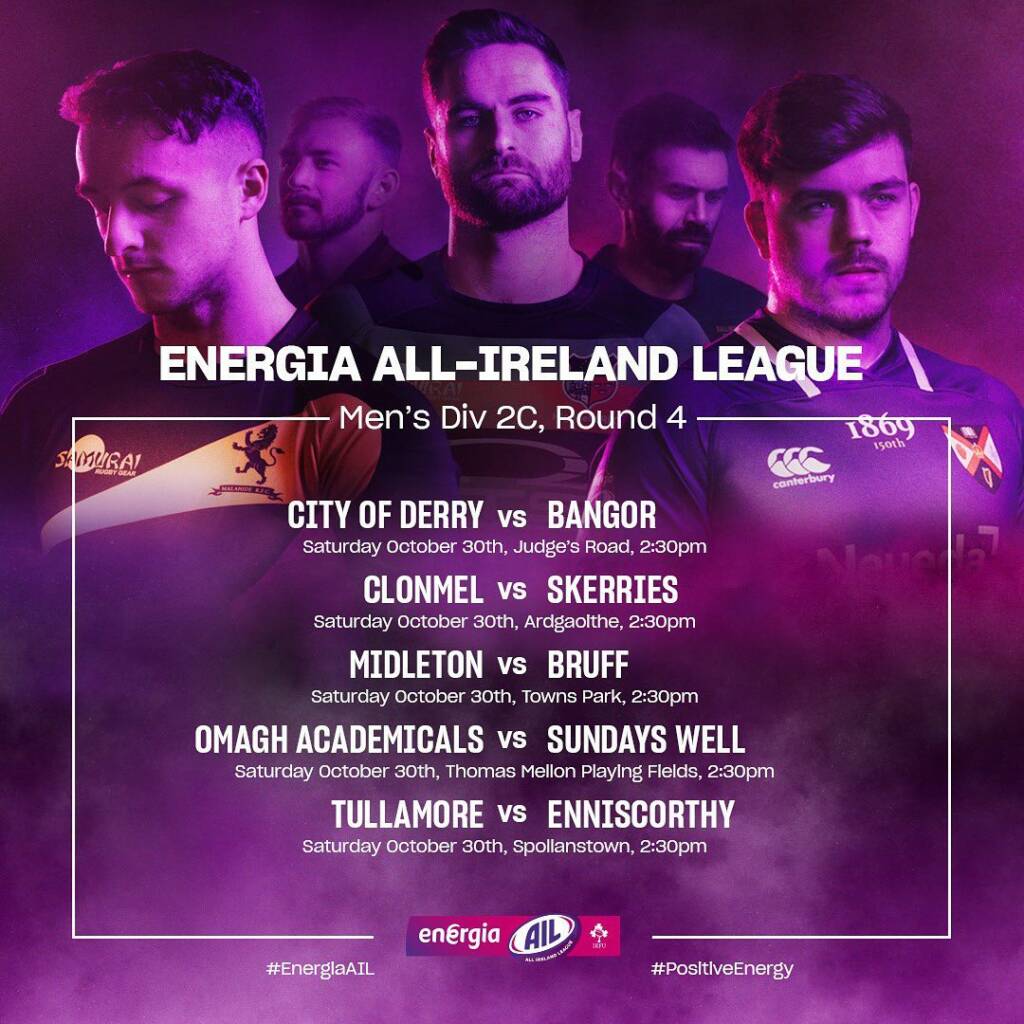 A second successive Munster derby for Bruff, who are still chasing their first win. Clonmel denied them last time out, despite the best efforts of player-backs coach Andrew O’Byrne and two-try prop Kieran O’Dywer.

Like Bruff, converting their chances has been a challenge for Midleton. If they can cut down on the errors, their attack will continue to gel with some fresh faces introduced behind the scrum.

Midleton won the sides’ last two league encounters at Towns Park, including a 23-10 victory in October 2019. Rob Carey and Rian Hogan both touched down, with Stuart Lee kicking 13 points.

A win here for either club would be a real shot in the arm, with Omagh licking their wounds after leaking 45 points to Enniscorthy, while Sunday’s Well are on the rebound from two tight defeats.

While Omagh’s attack has shown encouraging signs – winger Ryan Mitchell has scored three of their eight tries so far – they must shore up a defence that has struggled against teams at the table’s business end.

The down week will hopefully have given coaches Denis Hurley and Josh Featherstone extra time to sharpen up the ‘Well attack. Their five-try haul includes efforts from forwards Cormac Kelleher, Evan O’Connell and James Mulcahy.

These are a testing few weeks for Tullamore, who have back-to-back games against the division’s pacesetters. Having gone down 36-5 to Skerries, the midlanders return home to host table toppers Enniscorthy.

‘Scorthy are the second highest scorers across all five divisions, their 132 points boosted by 19 tries – including six from star centre Nick Doyle. The ageless Ivan Poole is still pulling the strings at out-half.

Tullamore’s own number 10 Sam Burns has been in match-winning form. Barry Bracken, captain Karl Dunne and Ciaran Ennis are also consistent performers, but it is hard to see them knocking ‘Scorthy off their stride.