The best junior clubs in the country line up for another crack at the Energia All-Ireland Junior Cup, which returns for the first time since Kilfeacle & District were crowned champions in January 2020.

Ashbourne have an indelible link with the All-Ireland Junior Cup, as three-in-a-row winners between 2017 and 2019. They are unbeaten in eight home games in the competition stretching back to 2016.

The Meath men won a nail-biting semi-final 20-19 when Clogher Valley visited five years ago, but on current form, Clogher look well placed to gain some revenge.

Stephen Bothwell, head coach of the current Ulster Championship Division 1 leaders, told the Impartial Reporter: “Momentum builds one from the other, so I don’t see any cup competition as a distraction because when you’re winning, you’re building a good feeling and that’s important.

“I would want my bread and butter to be the league, but the All-Ireland Junior Cup is certainly on our wish list.”

Both Ballyclare and Gorey lost at the quarter-final stage in 2019/20. Mike Orchin-McKeever continues at the helm of the Co. Antrim club, ably assisted by former Ulster prop Ricky Lutton.

They had two savvy operators behind the scrum in captain Joel McBride and James Creighton, while highly-rated young number 8 Jack Gamble has played for Ulster at underage and ‘A’ levels.

Gorey are battle-hardened for their big trip north after a bruising 17-14 defeat to Seapoint. They are coached by Phil de Barra, who took charge of the Leinster Women’s team this season.

Skipper Daragh O’Leary and Stephen Gardiner form a teak-tough second row pairing. Gardiner, a former Ireland Under-20 and Club International player, was an All-Ireland League winner with Lansdowne in 2015.

Kilfeacle & District launch their delayed title defence at Creggs, with a number of their main men from 2020 still to the fore. Player-coach Willie Staunton remains a talisman, landing a late penalty to defeat Richmond just last week.

Creggs have had a few false starts in the Junior Cup, losing first round games to Clonmel and Ashbourne. But they have been going well of late, posting five straight wins before losing 10-6 to Connemara in the Connacht Junior League.

Pat Cunningham coaches the Galway club’s first team, with Connacht prop Denis Buckley one of the assistant coaches. They are captained by versatile forward Brian Diffley, a former member of the Connacht sub Academy.

Kilfeacle’s form away from home has been of a high standard already this season. They gave Old Crescent a stern test in the Munster Senior Cup and beat Old Christians and St. Senan’s (twice) more recently.

Dromore feel they have unfinished business with the All-Ireland Junior Cup after losing the 2020 final by four points. They also made the quarter-finals in two previous seasons.

This is Suttonians’ first appearance in the Junior Cup, as player-coach Peter Synnott tries to drive the club back towards their halcyon All-Ireland League days. Stalwart half-back Dave Traynor is the skipper.

Sutts did open their win account last week in Leinster Junior League Division 1A, overcoming Dundalk 28-18 with try-scoring centre Conor Jennings among the players to impress.

Dromore also have one league victory to their name so far. They won away to Carrickfergus by a single point, and have Jason Gribbon, the ex-Banbridge scrum half, back playing at his hometown club. 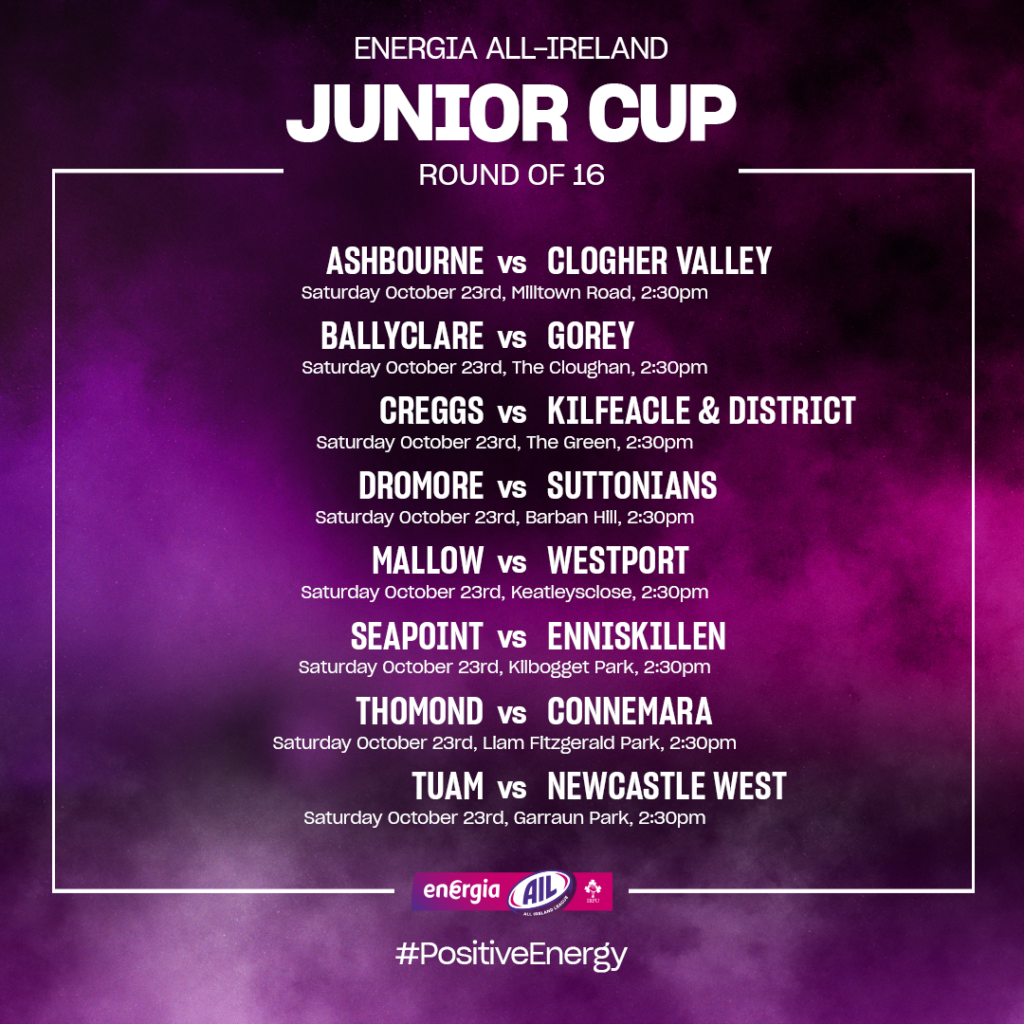 Mallow make their long-awaited return to the All-Ireland Junior Cup. Their most recent game in the competition was a home semi-final back on St. Patrick’s 2007, which they lost 29-13 to Coleraine.

Westport’s Bulls have put together a solid Cawley Cup run and their lone Connacht League game to date was a 19-3 triumph over Tuam. Their team boasts an experienced spine from Tom Geraghty through to Kevin Corcoran.

Connacht sides have underperformed in the Junior Cup over the years. Westport have had some difficult draws, coming up against Ashbourne in the first round three times. Could this be the year they make the breakthrough?

The third of the former champions in this season’s competition, Seapoint look in very good fettle going by their Leinster Junior League form. Four wins out of four – and two try bonuses – for Karl Miller’s charges.

Number 8 Zac Jungmann has caught the eye with four tries, including a brace against Gorey last week, but there are wholesale changes for tomorrow with only Peter Lyons and Daniel Montayne retained up front.

Matt McKenna shifts to out-half, while full-back Eddie Weaver is the only other player to keep his place. Meanwhile, this is Enniskillen’s first ever away trip in Junior Cup history.

The Fermanagh outfit warmed up for this game with a 31-12 bonus point success against CIYMS. Most of that starting XV remains intact for this week, including man-of-the-match lock Neil Rutledge.

Enniskillen head coach Stephen Welsh told the Impartial Reporter: “We worked hard two seasons ago now to get into this competition. For a lot of the lads it will be their first taste of the Junior Cup, so we’ll see what lies ahead but we’re looking forward to it. It’s an exciting week.”

Thomond are sitting second in Munster Junior League Conference A, having beaten both Newcastle West and Clanwilliam. Winger Darragh O’Neill has weighed in with two tries and out-half Adam Guerin has kicked 23 points.

This is the Soda Cakes’ first tilt at the All-Ireland Junior Cup, their long run as an All-Ireland League club coming to an end in 2019. They are sure to have the backing of a big home crowd tomorrow.

Although Connemara have fallen at the first hurdle in the last two Junior Cups, losing out to Gorey and Ballyclare, they were quarter-finalists in 2014/15 and 2017/18 and have a strong cup pedigree out west.

Henry O’Toole’s well-drilled Blacks, who have a number of Under-18 players pushing through, are determined to build on their league-and-cup double heroics of 2019. They retained the league title last year and shared the cup with Castlebar due to Covid-19.

The second Galway-Limerick clash of the opening round sees Tuam return to the Junior Cup for the first time since 2011. This will be their first time to host an All-Ireland fixture after away losses to Cashel (2009) and Coleraine, two years later.

Despite a high number of injuries amongst the squad, Tuam head coach Barry Ruane is remaining positive. “It’s fair to say we do have our biggest injury list to date, but every club gets it,” he told the Tuam Herald.

“At the end of the day, it’ll be 20 against 20 with 80 minutes of rugby so anything can happen. Our club is growing every year and it’s a huge honour to have the Tuam jersey represented in the All-Ireland Junior Cup. We hope to do it proud.”

While Tuam have lost their first two league matches, Newcastle West have a won one, lost one record in Munster. They head to Galway on the back of an encouraging 40-7 victory over Abbeyfeale.

They have a number of players still involved who were part of the team that reached the Junior Cup semi-finals in late 2017. Among them are Sean Herlihy, James Kelly, who scored a hat-trick against Abbeyfeale, Darragh Fox, Dave Foley and current captain Alan O’Riordan.