The Energia Women’s All-Ireland League resumes on Saturday, with a repeat of the 2019 final between Railway Union and UL Bohemians topping the bill.

Preview: Ballincollig are breathing down Old Belvedere’s neck, lying just a point outside of the top four. So this trip to Anglesea Road will tell a lot about the Cork side’s early-season progress under Fiona Hayes.

Fellow half-back Jemma Farrell believes ‘Belvo will bounce back from their 46-17 away defeat to UL Bohemians, during which they lost captain Jenny Murphy to an early red card.

“We learnt lots from the UL Bohs game,” she said. “It was a tough challenge, especially with playing most of the game with 14 players. We learnt that we still have some things to work on to ensure we finish top four before Christmas.

“It’s really exciting to see the AIL growing and the introduction of new teams. Ballincollig have had a great start to their campaign and we know it’s going to be a challenge this weekend against them.

“Having two weeks to prepare and review the Bohs game we are in a strong place as a squad, so we are excited to showcase what we have been working on.

“We know that Sene and Kathryn will add lots of experience and we’re very excited to have them back in the black and white stripes.”

Looking forward to taking on top-four opposition, Denis Stevenson, Ballincollig’s director of rugby, said: “We’re delighted with the team’s performances over the first three rounds. It’s been beyond what we had hoped for.

“The players have really taken to the new experience of the AIL. We now face into a round of games against the teams above us, starting with the difficult challenge of an away game to a very tough Old Belvedere.

“We’ve a few injuries but it gives us an opportunity to see the squad’s depth. We are hoping to be competitive and we understand this is another step on the journey to get to where we want to be, in the not so distant future.”

Preview: It was one away win each when Cooke and Blackrock College last met during the unfinished 2019/20 season. ‘Rock are on a roll after scoring 113 unanswered points in the last two rounds.

Ben Martin’s charges were too strong for both Suttonians and Wicklow, with nine different players sharing out 19 tries. Young backs Eimear Corri and Maggie Boylan have scored four each, as joint-top try scorers in the league.

Recent signing Naomi McCord continues to lead by example for Cooke, with three tries in as many matches. Their pack packs a punch, but watch out too for talented centre Claire Johnston who brings a lot of energy in defence and attack. 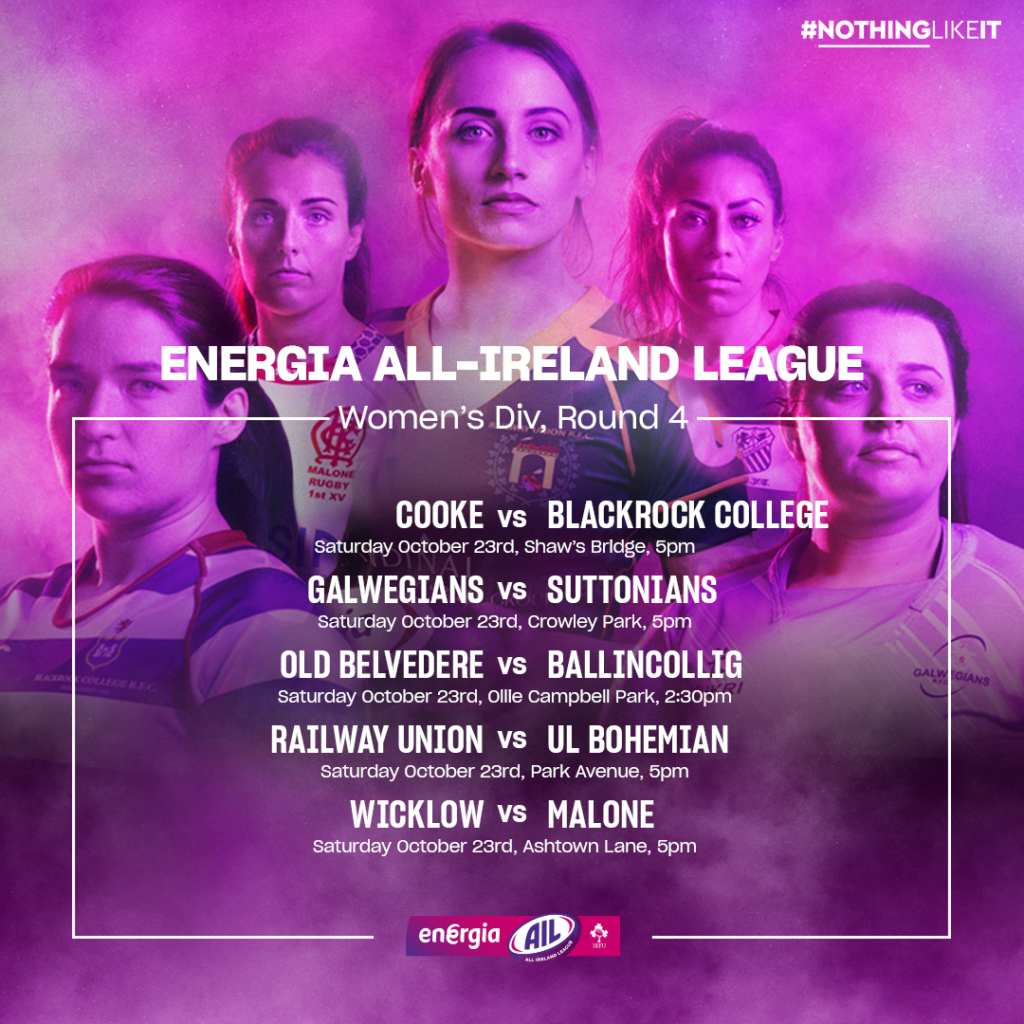 Preview: Chasing their first victory of the league season, Galwegians are hoping to get the best out of their dynamic back-line when seventh-placed Suttonians pay them a visit in Glenina.

Ursula Sammon and Orla Dixon have linked up well in midfield, scoring two tries each so far, and the return at full-back of former Ireland international Mairead Coyne has been another positive for ‘Wegians.

Their team manager Lisa Anglim said: “We’re excited to have a dynamic back-line out. We were disappointed with our performance against Ballincollig (losing 31-17), but took a lot of learnings from it.

“We’ve prepared well over the week’s break. This is an exciting and dedicated group of girls and I think we can expect some good results coming in to this next block of fixtures.

“We have been relatively fortunate with injuries so far this year and have a full complement returning this weekend for Suttonians. Fiona Scally, Grace Browne Moran and Lizzy McNicholas from the Connacht squad will be returning for their first game this season.”

Meanwhile, Suttonians’ line-up will be strengthened by the return of Molly Fitzgerald and Katie Reel from long-term injuries. Their collective confidence is up after an impressive 28-12 dismissal of Cooke.

Sutts head coach Stephen Costelloe is promising ‘lots more to come’ following an impressive maiden win, saying: “We are implementing a new playing style and it’s a big adjustment, so it was great to see some of it coming to fruition.

“I think we have threats all over the park, Molly coming back in will be an exciting addition to the back-line, and Aifric O’Brien has been a great source of go-forward ball from 8.

“Galwegians are fantastic side and we are expecting a tough battle over there, they are a side that will battle for every inch. They have a lot of very talented players.”

Preview: The main event of the weekend as title holders Railway Union and UL Bohemians, the 13-time league champions, meet in a top of the table clash in the capital.

Both teams are unbeaten since the start of the new season, with Railway only playing two games to date due to a Covid-19 cancellation last time out.

UL Bohs beat John Cronin’s side twice in 2019/20, winning 24-10 at Park Avenue. They start Ireland captain Ciara Griffin at number 8 after her try-scoring cameo off the bench against Old Belvedere.

Bohs’ director of Women’s rugby, Niamh Kavanagh, commented: “The big positive from the Belvedere game was how well the younger girls did playing against one of the top four teams. For a number of them, this was a step up in rugby levels.

“We’re expecting a very hard game tomorrow and a physical one, for sure. Railway will have a strong side ready. We always look forward to playing Railway.

“Chloe (Pearse) and Nicole (Cronin) have been great so far, showing their skills and leadership. But, for me, there are several younger players standing out too, the likes of Aoife Corey with four tries in the back-line, and Sarah Garrett in the forwards.”

It should be a fascinating duel at number 10 between Cronin and Railway’s Nikki Caughey, top of the competition’s leading scorers. They battled it out in the recent Interprovincial Championship and now do so in club colours.

Railway welcome back Claire Keohane to the bench after a long injury lay-off, while Ireland prop Lindsay Peat is also part of the matchday squad on her return to club action.

Speaking about the team selection, Railway director of rugby John Cronin said: “With our Sevens international players unavailable this week, (captain) Niamh Byrne moves to the centre from the wing.

“Grainne O’Loughlin starts at loosehead, holding off Lindsay (Peat) which shows the regard the former Sligo footballer is held in. It’s also great to welcome back Claire from injury.”

Stephanie Carroll, Aoife Doyle, who both feature on the wing, and second row Siobhan McCarthy will be lining out against a high number of their Munster team-mates, six weeks on from their Interpro success.

“We think we’ve got a good game-plan to counteract whatever they throw at us and hopefully we come away with a win.”

Preview: Wicklow are back on home turf and determined to put the ‘valuable lessons’ learnt against three top-class Dublin teams into practice. They host a Malone side that gained promotion in 2019.

Moreton commented: “Ella Roberts is back at full-back and looking sharp after joining the Ireland Sevens squad. Ella’s 19-year-old sister Beth is at (number) 10 and we have co-captain Erin McConnell starting her fourth game at scrum half.

“Our goal is to get the ball wide to our speedy outside backs. With Ireland Touch player Naoise O’Reilly on the wing and with a skilful 9 and 10, we are hoping to do this.

“Up front, Lauren Barry and Kathy Byrne grow in confidence with more game-time, second rows Shauna Soady and Ciara Brennan are hungry to run with the ball, and our loose forwards, Jessica Schmidt and Emily Ryan, are working hard at the breakdown.”

“It’s a game we have been looking forward to and we’re under no illusions as to the strength of the Malone team,” he added, mindful of the Belfast club’s first round victory over Galwegians.

“We hope to cross the line early to build some confidence and know that with every game, we are only going to get better and better.”

Meanwhile, Ulster second row Alan O’Connor has been helping out with Malone’s lineout training in advance of their trip to the Garden County.

Malone boss Jamie McMullan makes six changes to the side that lost 57-12 at Old Belvedere in round two. Cara O’Neill, Jill Stephens and Ulster’s Ella Durkan are added to the back-line, the latter coming in on the right wing.

Rebecca Greenaway switches to number 8 to accommodate the inclusion of Jo McMorris-Cloughey on the blindside. American recruit Amonae Dabbs-Brown starts in the second row, packing down behind Chrissie McKee at tighthead.