Blackrock College were the only team to win away from home in the latest round of Energia Men’s All-Ireland League Division 2B action. Sligo have moved back into the top half of the table.

Referee Paul O’Connor was the busiest man at Crowley Park, dishing out eight yellow cards in a frenetic, rain-hit game that Blackrock College won 17-5 to remaining unbeaten in Division 2B.

Galwegians got off to the ideal start, winger Karl Waterman scoring from an Adam Cunningham pass in the fourth minute. Incredibly, that would be prove to be their only score of an eventful afternoon.

The referee’s whistle peppered the air, ‘Wegians crucially losing ground and when Blackrock went to the corner, their rolling maul paid dividends with hooker Liam McMahon bringing them level.

The hosts were unable to take advantage of two Blackrock sin-binnings, as prop Paul McSweeney saw yellow for sealing off and full-back Ethan Lyons was guilty of taking out Darragh Kennedy in the air. 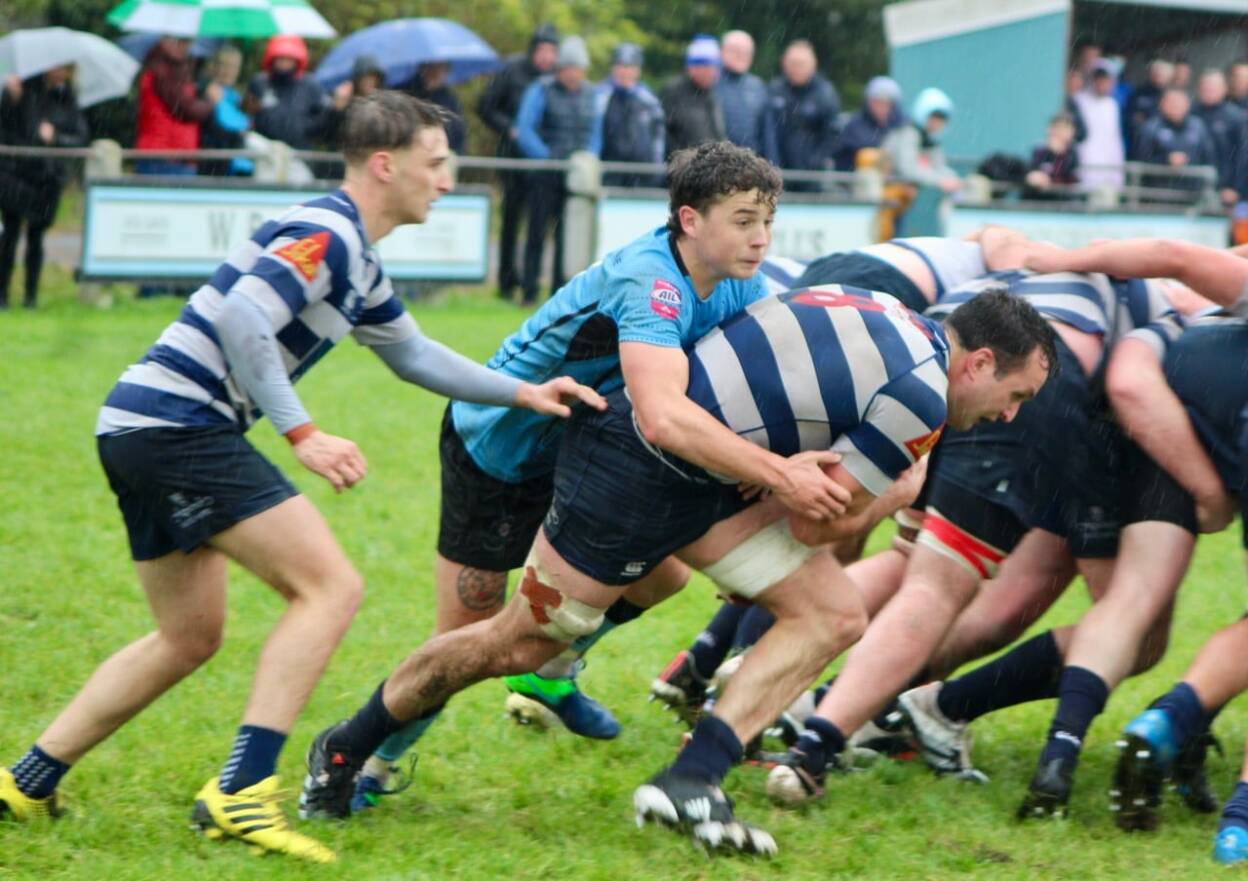 There were close calls and tackles galore but no further scores until just before half-time. With ‘Wegians forwards Diego de los Santos and Matt Towey both binned for maul infringements, ‘Rock captain Colm Gallagher touched down from a well-worked lineout drive.

Leading 10-5, James Blaney’s men pressed on with Peter Quirke’s 50:22 kick giving them prime field position and possession. The 48th-minute maul was stopped but good work from the backs set up scrum half Mark Edwards for a clinical finish.

The hefty challenges continued in an evenly-fought third quarter, as ‘Rock suddenly lost centre John Gallagher and McMahon to the sin bin in quick succession.

Galwegians had to make them pay, yet again their incessant pressure within scoring range – for all of 13 minutes – was repelled. 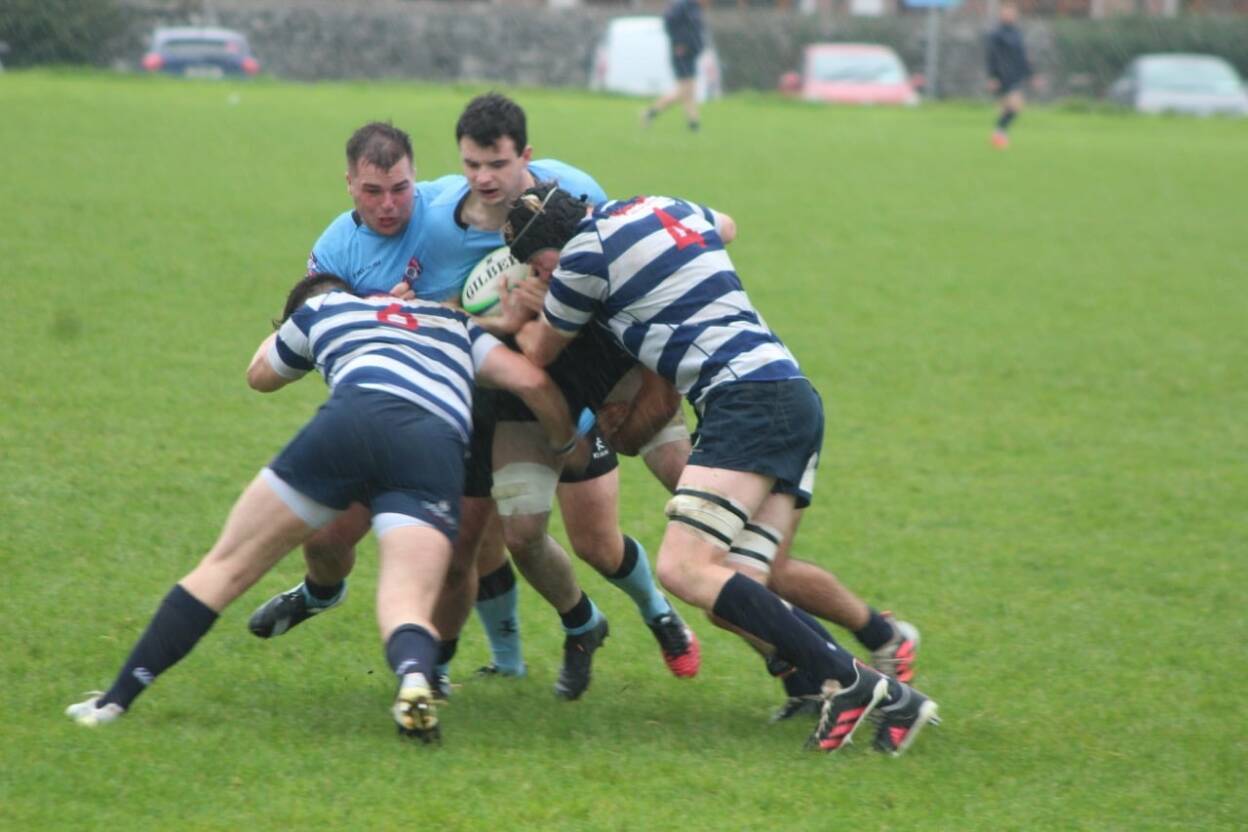 The home side’s frustration grew as loose handling ruined a certain try, and then influential flanker Brian McSweeney, who was particularly prominent early on, was binned for backchat.

Tensions began to boil over, with ‘Rock receiving their fifth yellow card for their part in a melee, but in terms of scores, the contest had dried up and there was no budging the 12-point gap.

Ballina could not have done much more, clawing their way back from an early 10-point deficit to draw level twice and then edge in front with their third try of the second half.

‘Quins also scored three tries, two of them from backs Tom Morris and James McConnell. Second row Christian Bennison was picked out as the player-of-the-match, for his work in the lineout and the loose. 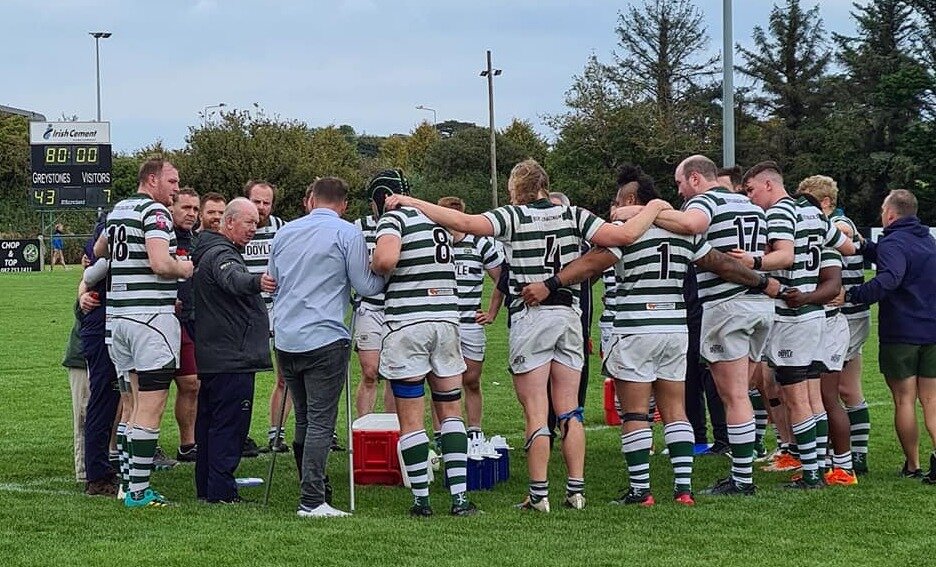 Leaders Greystones were given a tougher test by Galway Corinthians than the 43-7 scoreline suggests. Their execution in attack was the difference again with number 8 Danny Kenny helping himself to a hat-trick.

Kevin Lewis’ charges racked up six tries in all, with Kenny taking his season’s haul to five, winger Ferdia Kenny touching down for the third game running, and captain Killian Marmion moving his league tally to 45 points already.

Bottom side Malahide lost 19-7 to Sligo, putting in an improved defensive performance at Hamilton Park but only scoring late on through number 8 John Shine.

A tremendous chip-and-case try from lock Rob Holian lit up Sligo’s performance, as they returned to winning ways and a place in the top half of the table.

A knock-on spoiled a promising early Malahide attack, with Reece O’Connell darting up into the hosts’ 22, but Holian’s try near the quarter hour mark opened the scoring in some style.

The pacy second row ran into some space outside the visitors’ 22, chipped over former Ireland Sevens international Mick McGrath and the ball sat up invitingly for him to gather on the bounce and score under the posts.

Euan Brown converted and tagged on a late brace of penalties, giving Josh Reeves’ side a 13-0 half-time lead. Malahide had enough possession to be closer, with Johnny Butler and Dan Hayes seeing a good deal of ball.

However, Sligo were well organised and disciplined in defence, shoring up any gaps that emerged. They were also rock solid at set piece time and Matthew O’Hara proved a nuisance on Malahide’s throw.

When the home side applied the pressure, Malahide gave up some costly penalties. With a kicker of Brown’s calibre, they made a dent on the scoreboard with Sligo moving 19-0 clear by the hour mark.

Malahide did pick up seven points in the final minutes, hard-working back rower Shine scoring following a series of pick-and-drives close to the Sligo line.

Meanwhile, on the main pitch at the Aviva Stadium, a spread of three tries in the middle part of the match guided Wanderers to a 29-22 win over fast-finishing Dungannon.

Dungannon made sure they took something home from their historic visit to Irish Rugby HQ, gaining a well-merited losing bonus point thanks to closing tries from Andrew McGregor and John Russell.

The visitors also picked up a penalty try during the first half for a collapsed maul, yet Wanderers built a 17-10 half-time lead with two tries of their own.

Eoin Sheriff’s well-drilled side, who are third in the table, showed how clinical they can be when flanker Brian Vaughan drove over from close range.

They were are their free-flowing best when retaking the lead before the break. Cian Doddy flew down the left wing, cutting inside before possession found its way to centre Martin O’Neill who found a gap to go in under the posts.

The Chaps collected their second successive try-scoring bonus point thanks to a forwards-inspired try, early in the second period, and a neat finish from winger Eoin O’Shaughnessy.