It is a Leinster 1-2-3 at the top of Energia Men’s All-Ireland League Division 2B. Leaders Greystones, Blackrock College and Wanderers were all involved in three high-scoring second round clashes.

Centre Sam Russell had a home All-Ireland League debut to remember, sweeping through for two tries as Dungannon went up a gear or two in the second half to defeat Sligo 29-10.

Sligo’s confidence was high for this visit to Stevenson Park, and their hopes of making it back-to-back wins were still intact at half-time when they led 10-3.

Josh Reeves’ men scored a well-worked try, attacking infield from a lineout maul before going back to the blindside where Euan Brown released winger Stefano Giantorno for the corner.

Out-half Brown, who had earlier exchanged penalties with Jordan McIlwaine, added a classy conversion to put seven points between the teams at the turnaround. 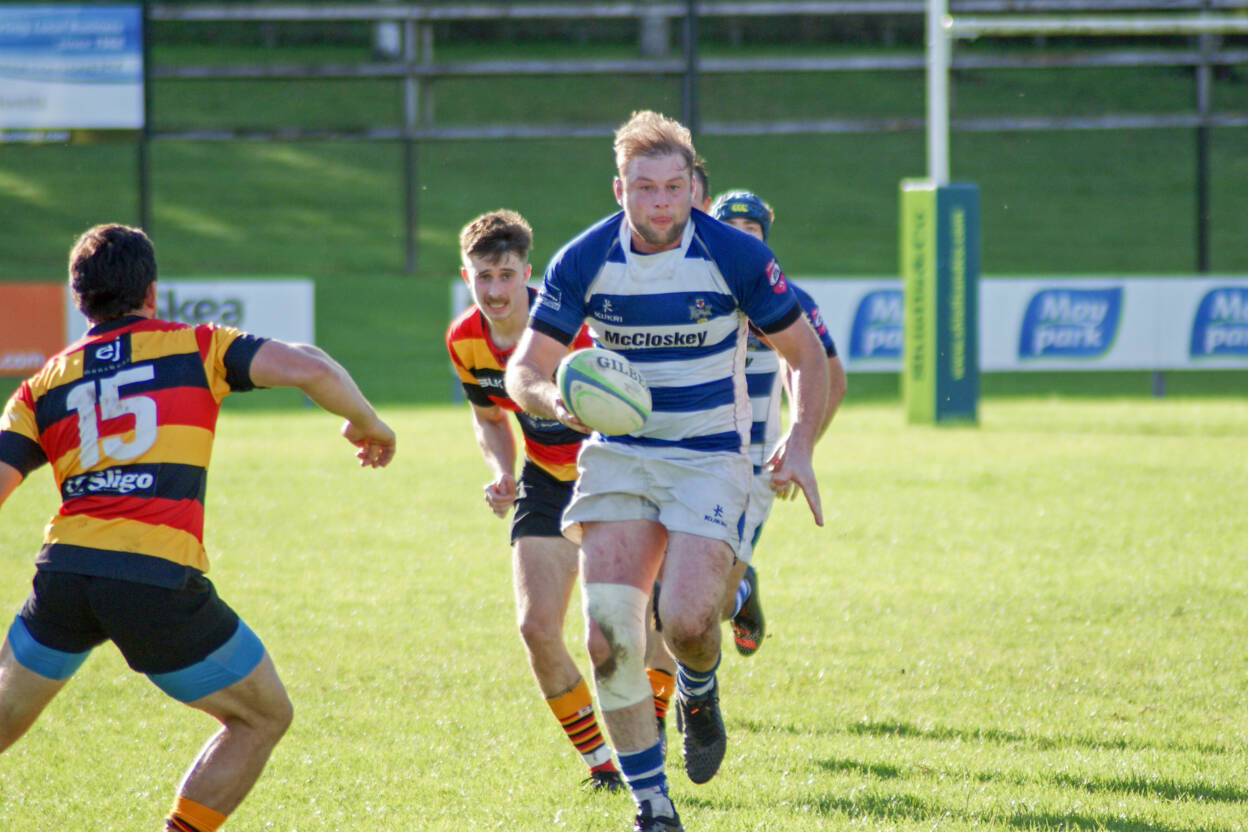 However, the scoring was only at one end after the break. Dungannon chipped away with their maul and pick-and-goes, leading to second row Lewis McCrabbe finishing strongly from close range.

McIlwaine levelled from the tee before ‘Gannon kept the pressure on. Russell, the player-of-the-match, proved an elusive runner, cutting through in the 55th minute to make it 15-10 to Andy Hughes’ charges.

Sligo’s lineout malfunctioned at crucial stages, an overthrown one allowing the hosts to put together some slick interplay and Russell was sprung through for his second try, which was converted this time.

There was still time for a late bonus point, as another loose Sligo lineout provided the possession for Russell’s brother, John, to weave his way over from 10 metres out. 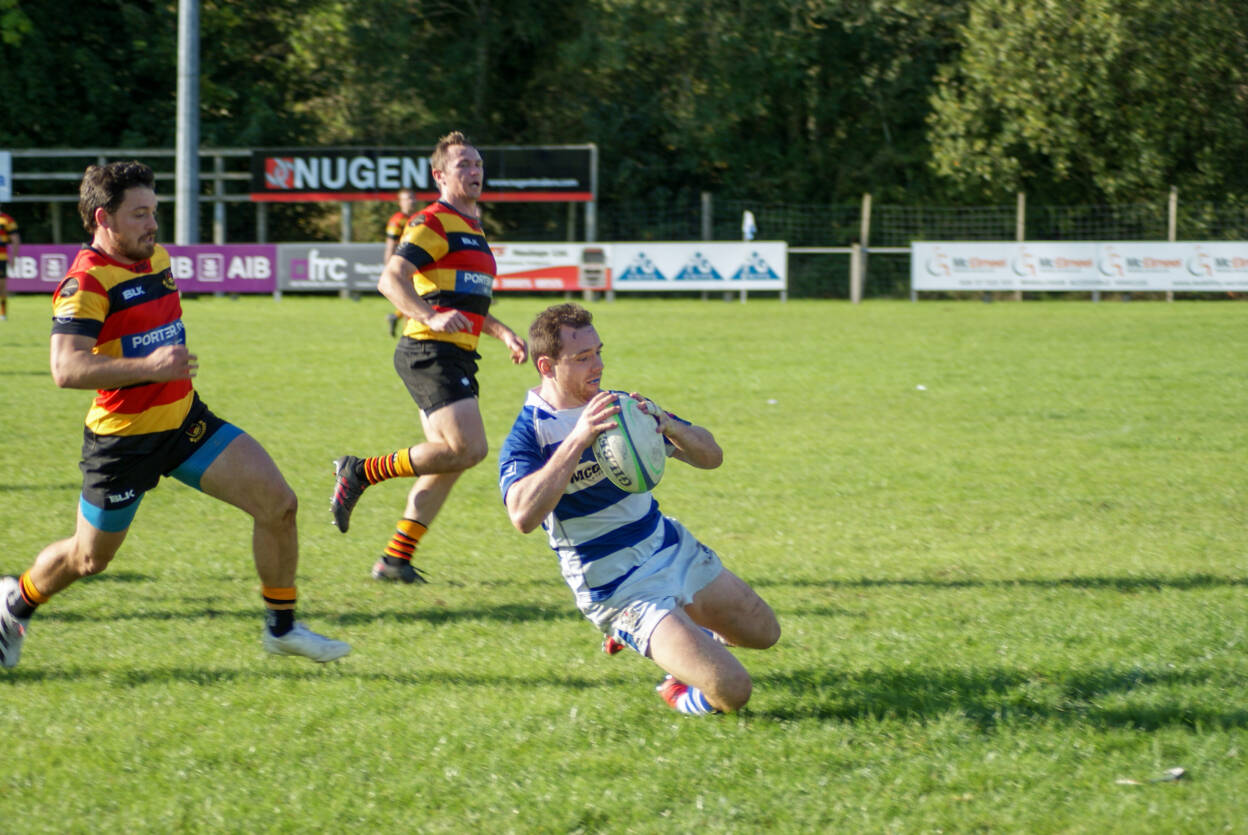 Giving his reaction afterwards, Dungannon head coach Hughes said: “In the first half we probably could have been out the gate because they missed a couple of kicks and had a couple of opportunities.

“But they bombed and we hung in there, and in the final five minutes we got our act together. Then in the second half we blew them away.

“With 20 minutes to go, they were gone, they were out the gate. So it was positive, particularly in the second half.”

An incredible 12-try contest between Ballina and Blackrock College at Heffernan Park finished in a 36-all draw. Blackrock’s Peter Quirke missed a late conversion to win the game.

This was certainly one that got away from a Ballina perspective. Their excellent centre Calum Quinn claimed a hat-trick tries and they lead by a dozen points on two separate occasions.

Indeed, Blackrock were 36-26 behind two late unconverted tries earned them a share of spoils. Those two hard-earned points keep James Blaney’s charges second in the table.

‘Rock captain Brian Colclough ran in a seventh-minute intercept try, but a brace of yellow cards left the visitors exposed and Ballina took full advantage to lead 26-14 at half-time.

Luke Sweeney, Fergal Tully, who scored from his own kick through, and Quinn (2) all crossed the whitewash, while Colclough inspired his team-mates with a second try of his own. 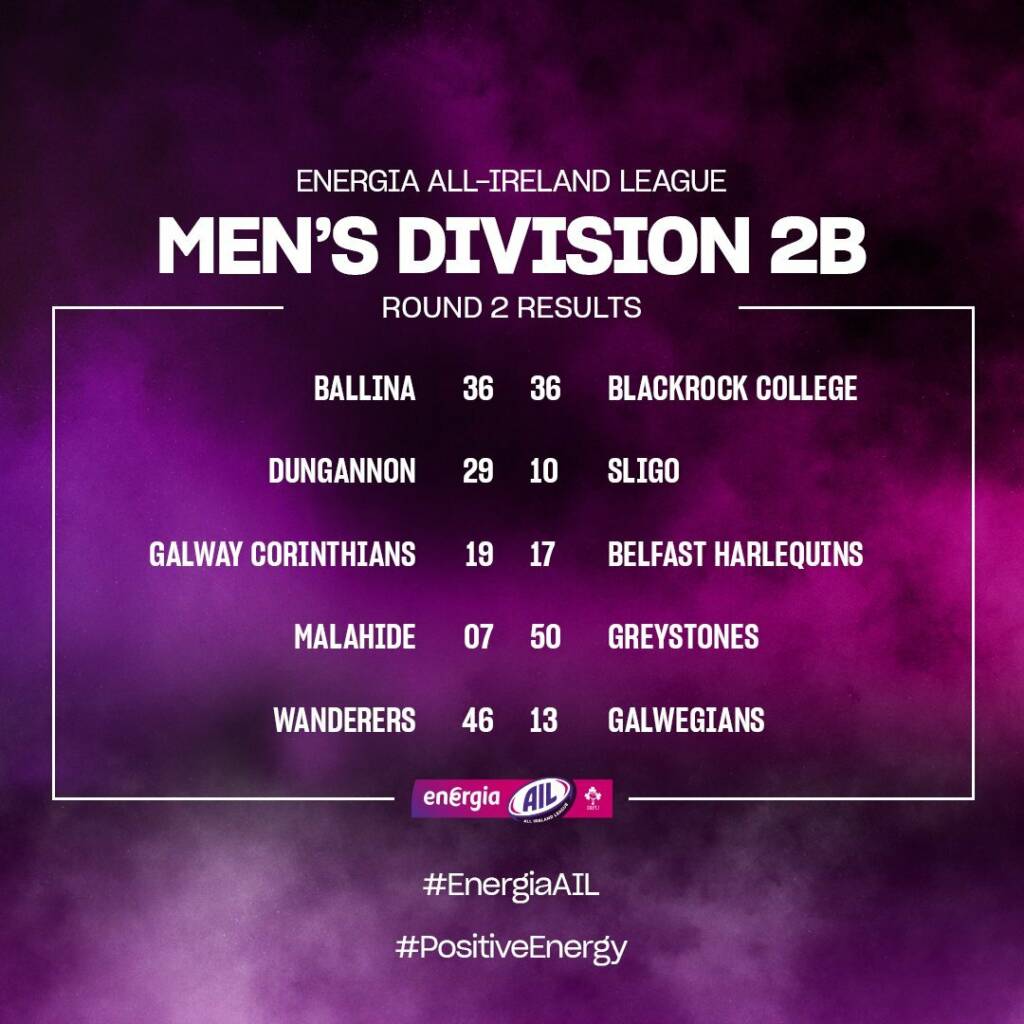 The Dubliners went up a couple of levels on the restart, firing back with two tries and a conversion to draw level by the start of the closing quarter.

Quinn showed his class when dancing through with 10 minutes remaining to register his fourth try of the campaign so far. Then a multi-phase attack ended with hooker Billy McVann diving over in the corner.

Neither conversion was successful, and back came Blackrock, swiftly reducing the arrears with a maul try. Their attacking was coming in waves again and Ballina could not hold out in a breathless finish.

Galway Corinthians celebrated their maiden victory of the new league season, after edging out a fast-finishing Belfast Harlequins 19-17 at Corinthian Park.

Great work by Colin Rafterty at a Corinthians lineout set up the opening try for hooker Adam Nash, on the half hour mark.

Dylan Keane tagged on his second successful penalty before his half-back Matthew Devine caught out the Harlequins defence with a clever dummy, breaking through for a late unconverted try.

That left ‘Quins, who had suffered a sin-binning, 16-0 behind at the interval. They also had to rejig their back-line with Chris Larmour and Lee Steenson both forced off through injury.

Neil Doak’s men showed their mettle, but it was a case of too little, too late. Their two closing penalty tries were preceded by Keane’s third and most important penalty for Corinthians.

The team Harlequins beat in the opening round, Malahide, went down heavily to high-flying Leinster rivals Greystones who scored eight tries in a 50-7 triumph at Estuary Road.

‘Stones were in control from Eoin Marmion’s eighth-minute try onwards, bagging their bonus point after just 25 minutes thanks to a penalty try from a power-packed scrum, in which Ivanhoe Takatai and Ntuthuko Mthembu both stood out.

The visitors led 31-7 at half-time, number 8 Danny Kenny showing impressive pace to score on the quarter hour mark after hooker Mthembu’s short lineout and an exchange of passes.

Captain Killian Marmion and flying winger Ferdia Kenny also notched first half tries for the Wicklow men, while prop Reece O’Connell found a gap to pull a score back for Malahide just before the break.

Starved of territory, Malahide were building some promising phases when Greystones centre Matt O’Brien intercepted a pass for a sucker-punch try, only five minutes into the second half.

Back rower Kenny was quickest off the mark again when running onto a Marmion kick over the top to complete his brace.

The Greystones skipper, who kicked and ran well from out-half, got a second try of his own in the dying minutes, profiting from replacement Alex Ryan’s quickly-taken penalty.

Scoring three tries inside the opening 18 minutes, a Brian Quill-led Wanderers proved too strong for Galwegians in their second round encounter at Merrion Road.

Prop Shane Moynihan’s closing try, on the back of a Cian Doddy run down the right wing, had the Chaps 34-13 ahead at half-time. It was 46-13 in the end with the hosts racking up eight tries.