Tim Small’s fingerprints were all over Ballymena’s 29-22 bonus point victory over Buccaneers, with the skilful out-half turning in a player-of-the-match performance.

Small kicked nine points and had a hand in a number of Ballymena’s tries, as they treated the large Eaton Park crowd to a brilliant opening spell, scoring 22 points in 21 minutes.

Small kicked a penalty before his break set up a Dean Millar try. In the 12th minute, Small and Dean Millar combined well again with Millar capitalising on an overlap, leading to a converted try from the impressive Adam Lamont. 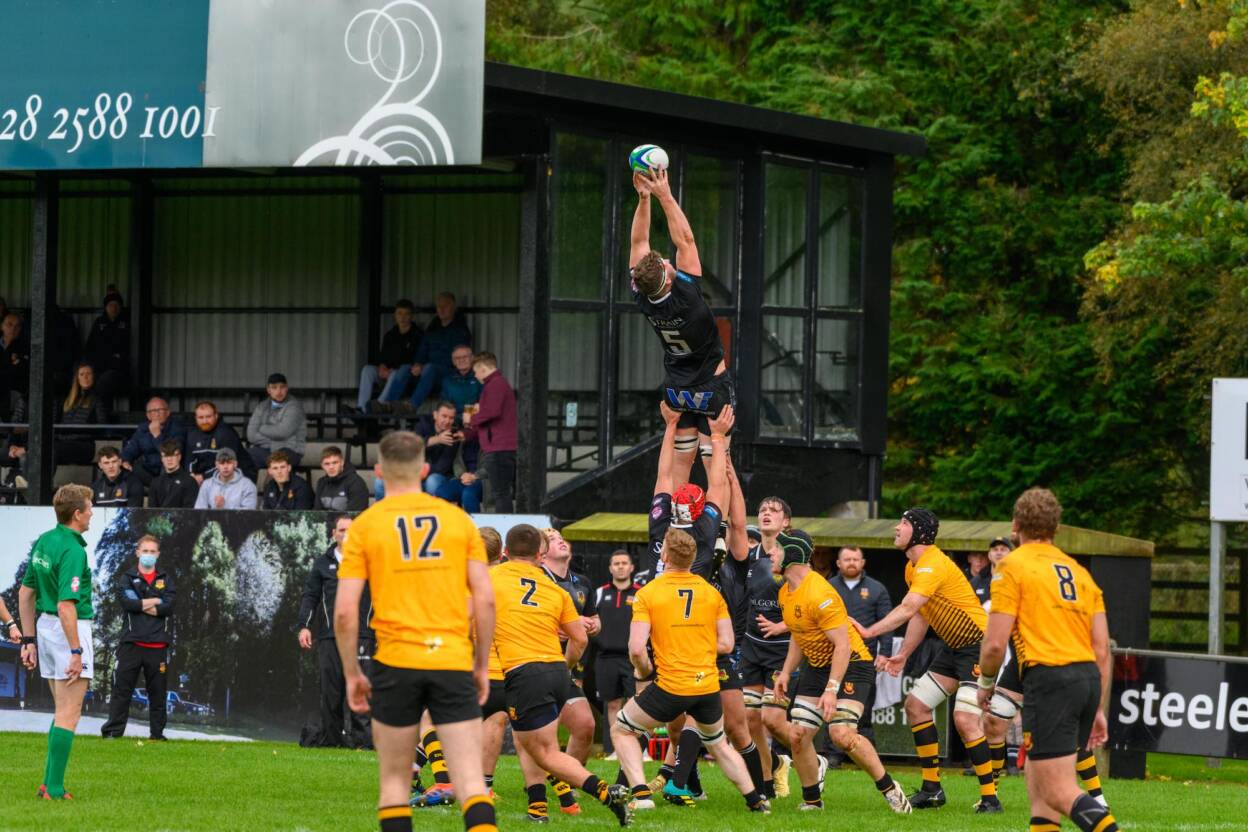 A Michael Hanley penalty got Buccaneers off the mark, but the Braidmen hit back at the start of the second quarter. James McCormick made it four tries in two games for the hooker, crossing from a well-executed lineout maul.

However, with Danny Qualter and Tabo Maree showing their ball-carrying ballast, Buccs seized the momentum. Captain Evan Galvin grounded a maul try on the half hour mark.

Hanley hit the post with the conversion but the Pirates added a full seven points in the 38th minute, their unrelenting pressure leading to a penalty try and suddenly the hosts’ lead was down to 22-15 for half-time.

It got even better for Buccs, five minutes into the second half. Connacht Academy hooker Declan Adamson touched down from another lineout drive, following a prior scrum penalty won against the head. 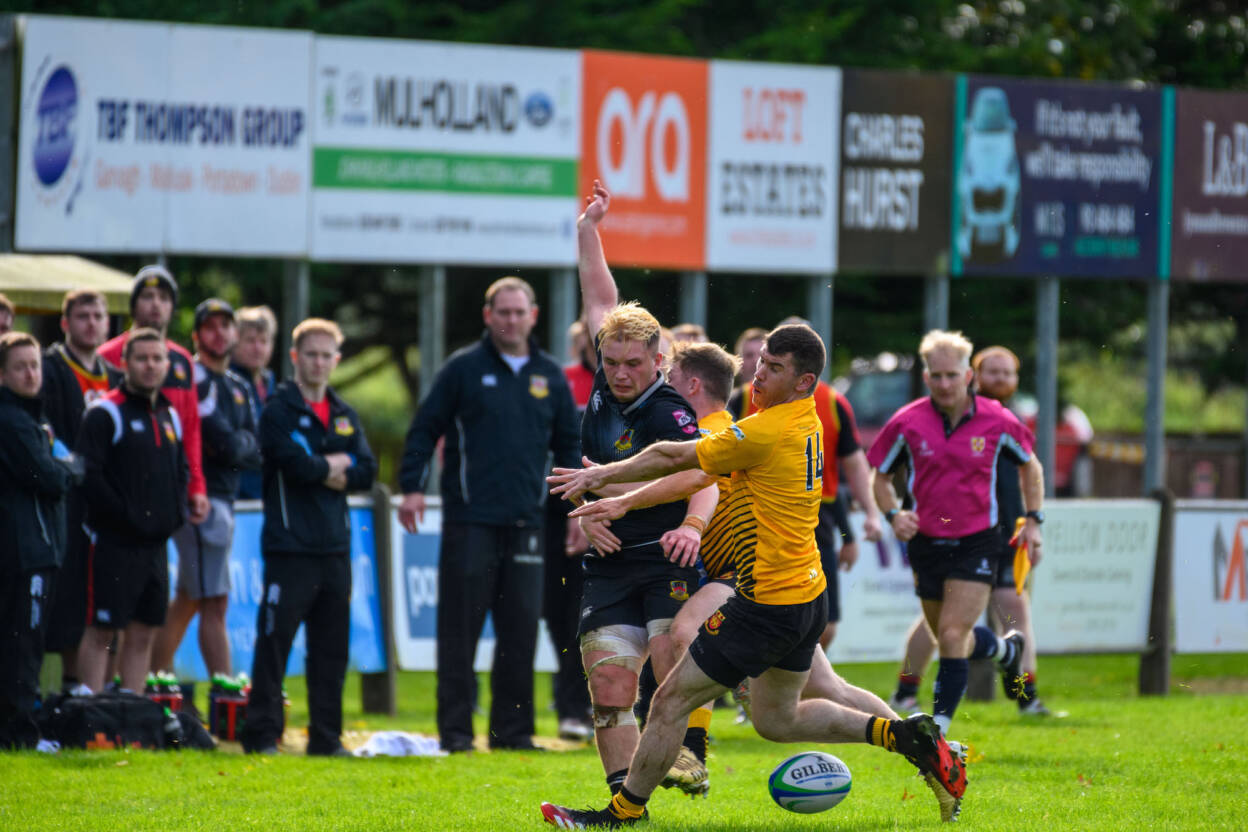 Hanley’s conversion briefly brought the visitors level, before Ballymena regained the lead on the 50-minute mark. The in-form McCormick grabbed his fifth try of the campaign, with Small converting.

Buccs came back strongly and dominated both possession and territory during the closing stages. Crucially though, they were unable to turn pressure into points and some key decisions went against them.

Ballymena did have one more chance, but they were turned over after a promising run by openside Lamont, one of three 18-year-olds in their back row.

Fresh from his try-scoring All-Ireland League debut for Dolphin last week, number 8 Brian O’Mahony bagged a brace as they romped to a 56-13 triumph at home to Rainey Old Boys.

Scrum half Daryl Foley put in an excellent kicking display at Musgrave Park, finishing with 21 points. He missed his only kick of the game after O’Mahony scored in the left corner early on.

There was not much between the teams initially, Rainey getting up and running with a Scott McLean penalty before centre Conor Fitzsimons’ try cancelled out an opportunist effort from Alex Denby.

Two Foley penalties extended Dolphin’s lead to 18-10, before Rainey were hit with the double whammy of a yellow card and a try conceded on the stroke of half-time. 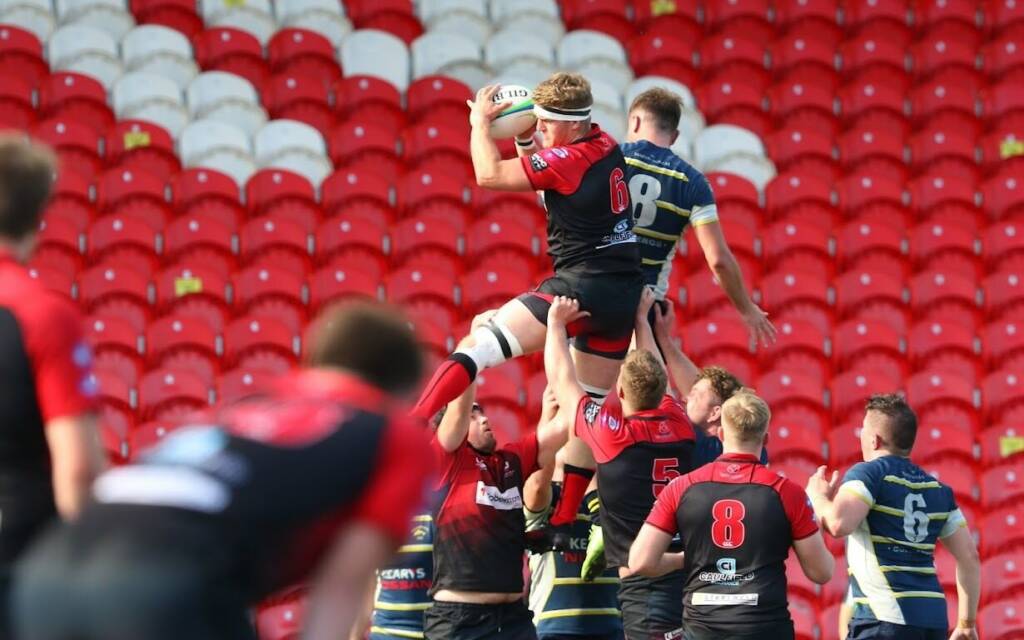 Out-half Cam O’Shaughnessy made a break off a late scrum and had Murray Linn on his shoulder, with the centre snapping up try number three, converted by Foley.

The Magherafelt outfit reduced the arrears to 25-13, thanks to an early second half penalty from out-half McLean, but that was as close as they could get.

Following a second Rainey sin-binning, Foley knocked over a penalty before Sam Boyle kicked through for winger Rob Reardon to pounce for the bonus point try, converted by Foley.

The next try was all Tim Marron’s own work, the full-back collected a loose Rainey kick, putting the ball skywards himself, catching it and landing unchallenged before racing away to make 42-13.

First half tries from Conor Lacey and Shane Stokes set MU Barnhall on their way to a 38-13 bonus point success against UL Bohemians. It keeps the Blue Bulls level with Queen’s University at the summit.

Two Harry Byrne penalties had Bohs leading at Parsonstown, but Barnhall created the space for Lacey to score in the 22nd minute. Adam Chester converted for a 7-6 lead.

Flanker Stokes got on the scoresheet a few minutes later, more good work from the hosts’ pack setting him up to drive over the line and Chester supplied another conversion.

Barnhall managed to add four more tries in the second half, the only response from Bohs coming on the hour mark when Kieran O’Shea crashed over following a well-executed lineout drive.

David Dooley, Geoff Brooks, who picked from the base of a ruck to dive over, and Eoghain Quinn all added to the Kildare club’s try haul before the best of the lot in the final play.

A long ball into the Barnhall half was the platform for a counter attack from replacement Matias Giannetti. After good interplay amongst the forwards, replacement scrum half Conor Neville took his opportunity well to close out the scoring.

Graham Curtis, who made his Ireland Sevens debut last year, ran in a hat-trick of tries as Queen’s got the better of Old Crescent on a 40-21 scoreline at the newly-named Takumi Park.

Conor McMenamin, captain David Whitten and Robbie Johnston also touched down for the front-running students, who had five conversions from out-half Ritchie McMaster.