A gap is already developing in Energia Men’s All-Ireland League Division 2C, with the leading four clubs all winning away from home on Saturday.

Skerries overturned a nine-point deficit to win a real rollercoaster of a game at Bruff. The Goats prevailed 18-17 thanks to a late Oisin McKey try and the decisive penalty from Paul O’Loghlen.

Winger McKey was involved in the build-up to Skerries’ opening score, gobbling up Eoghan Carron’s chip kick, stepping inside a defender and sending captain Kevin McGrath over to the right of the posts.

Bruff recovered well, playing with some great width in attack. They were losing the breakdown battle, but into the second quarter, they strung together a series of scores. 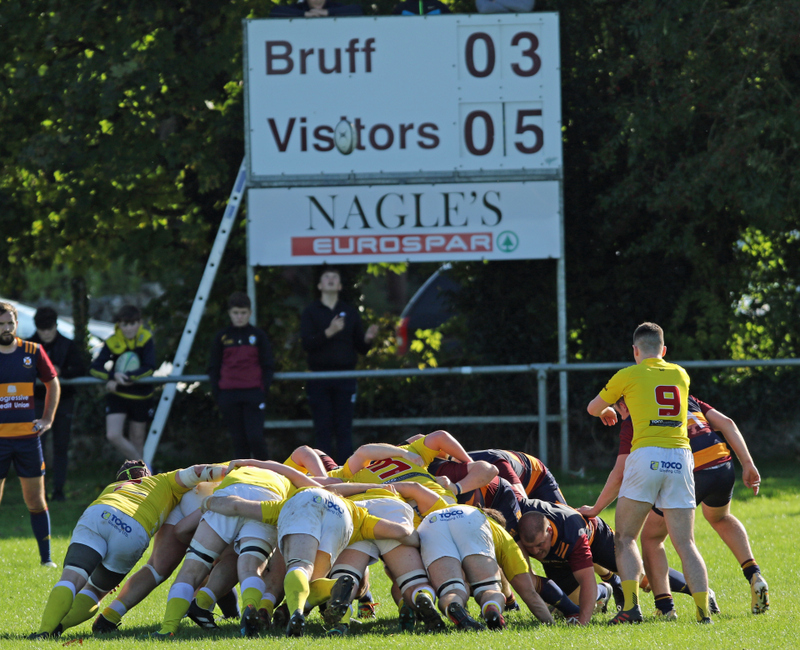 As Skerries’ error count rose, an Adam O’Dwyer penalty got Bruff on the scoreboard. They followed up with a well-taken try, the maul being the launchpad and front rower Thomas Quigley muscled over in the left corner.

O’Dwyer and O’Loghlen traded penalties, either side of half-time, with Skerries unable to capitalise on a break by their 18-year-old full-back Ronan Mulcahy.

Full-back O’Dwyer responded for Bruff with a brace of well-struck penalties, firstly punishing a high tackle and then a tip tackle by McKey who was sent to the sin bin.

However, the closing stages belonged to Skerries. With fresh legs on and their experienced players leading by example, they improved across the board but the 17-8 scoreline remained in place. 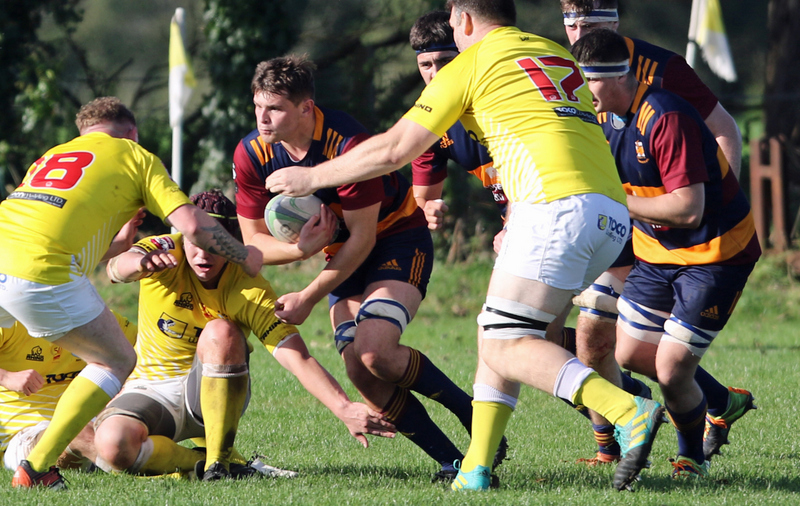 With six minutes remaining, they conjured up a vital try to get back in the hunt. Cormac Murphy ran a great line, passing to McGrath who cut past a couple defenders and fed McKey to score.

Number 10 O’Loghlen converted from the right, and it was from roughly the same spot that he nailed the match-winning penalty two minutes later. Bruff were pinged for tackling scrum half Carron without the ball.

Enniscorthy have taken a one-point lead at the top of the table, having pocketed their second try-scoring bonus point. They were resounding 48-10 winners over City of Derry at Judge’s Road.

Derry’s preparations were badly hit by injuries, and a shaky lineout and weakened scrum were meat and drink to in-form Enniscorthy. Two tries from returning winger Calum O’Hagan provided the positives for the hosts.

Derry head coach Richard McCarter told the Derry Journal: “I thought we still showed lost of positives, especially in the second half. The first half was difficult, the breeze out there was a bit stronger than it probably felt on the sidelines so it was hard to exit our 22.

“We needed to hang in there a bit better in the first half and then have more of a go in the second and be better on the ball.

“Callum was outstanding to be fair to him. Even in the warm-up, his positivity, his energy was really excellent.

“He gave us that spark that we have been missing lately and he kept going right to the end. He put his tackles in, created problems for them and was our man-of-the-match comfortably, I thought.”

With Derry losing two-thirds of their starting front row to injury, the Wexford men continued to dictate play. Centre Nick Doyle danced away from four defenders to run in a 24th minute try.

Derry failed to deal with a kick through as Daniel Pim, Doyle’s centre partner, grounded the ball for try number three. O’Hagan replied after some good phase-building from the home side. 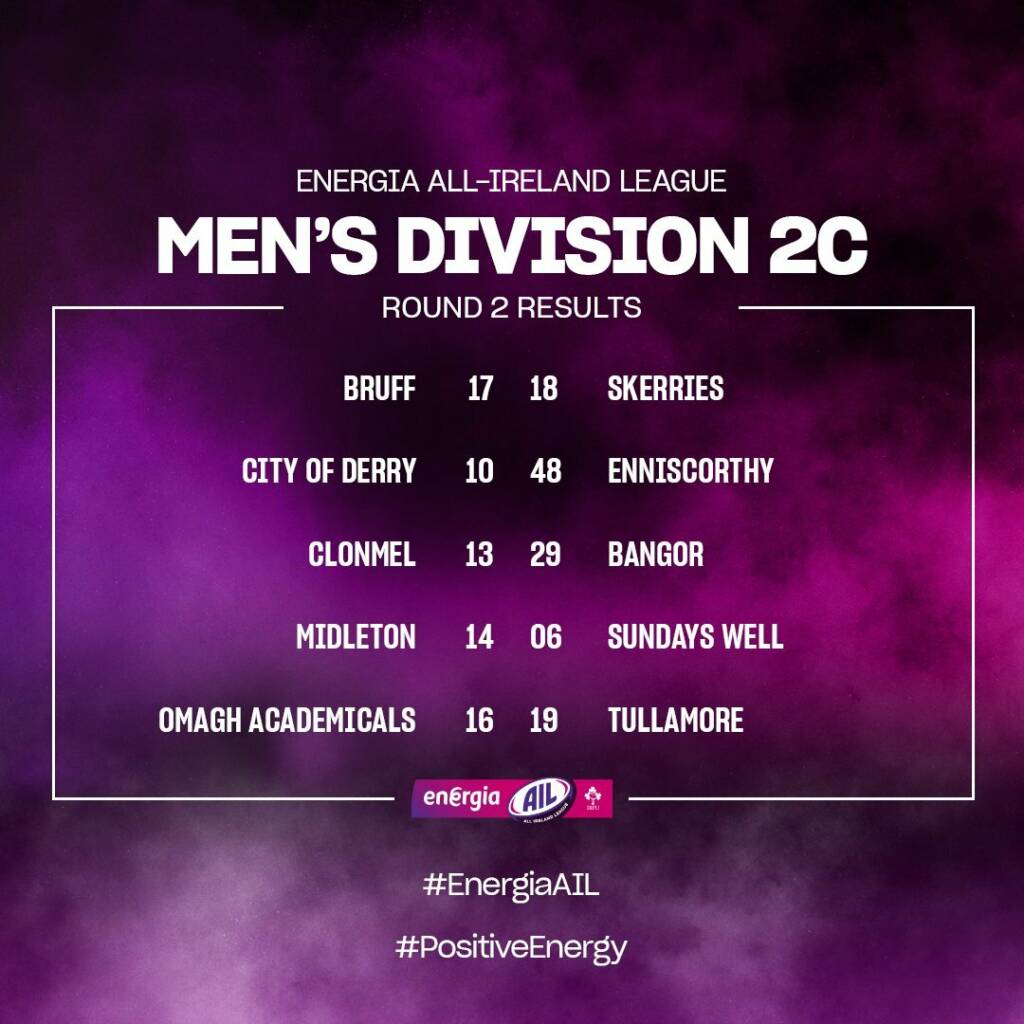 Kevin O’Connor claimed ‘Scorthy’s bonus point score right on half-time, and fellow winger David O’Dwyer got over in the corner following a quick tap in the 55th minute.

O’Hagan continued to carry the biggest attacking threat for Derry, and he was held up under the posts before some sharp recycling and passing from McCarter’s men eventually earned the wide man his second score.

However, ‘Scorthy were much the better team and made sure to finish on a high thanks to further touchdowns from replacement Shane Lynch and player-of-the-match Doyle, with his fourth try in two games. 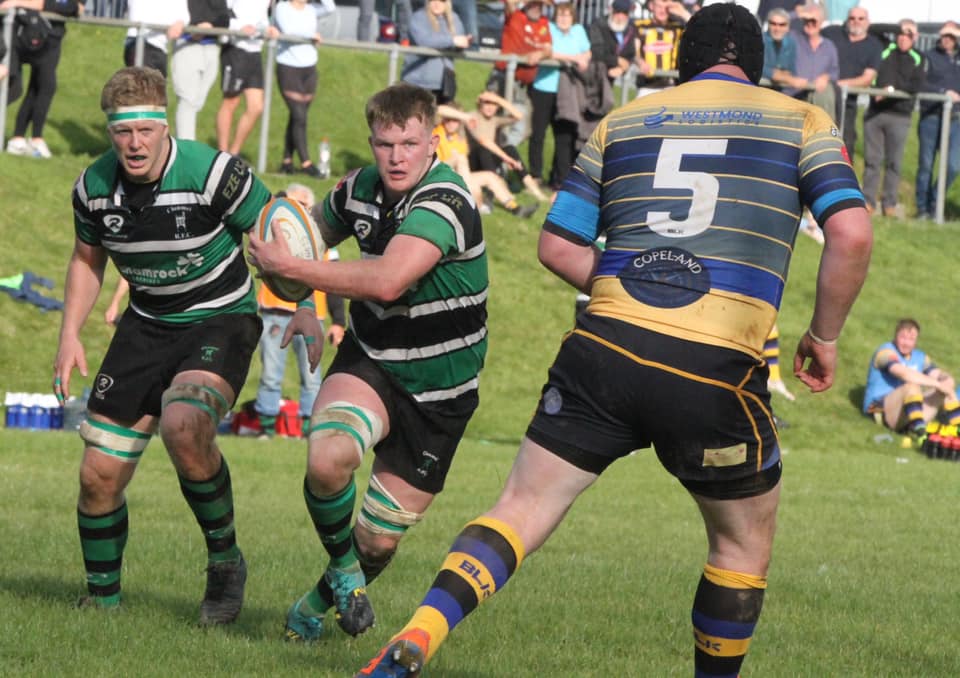 Bangor also bagged their bonus point in the last few minutes, James Henly shrugging off defenders to break into space. He had Conor Lusty up in support and then fellow centre Ally McIvor collected the final pass to cut through the last of the defence and score at the posts.

IRFU President Des Kavanagh was an interested spectator as Bangor opened up a 10-3 half-time lead, Clonmel’s Aidan Hickey kicking a late penalty in response to a Gareth Millar strike and a Matt Nesbitt try.

A pick-and-drive effort from Mike Weir, in the 44th minute, saw Clonmel punished for a yellow card. The number 8 repeated the trick when Bangor were next in scoring range, with Millar converting for 22-3.

Clonmel had a couple of near misses, most notably being held up over the line, and their lifting of the tempo pressurised Bangor’s Rob Gamble into a high tackle which earned him a yellow card.

The Tipperary outfit got their just reward with those two tries during the final quarter, giving them a bit of momentum to take into next weekend’s trip to Munster rivals Bruff. 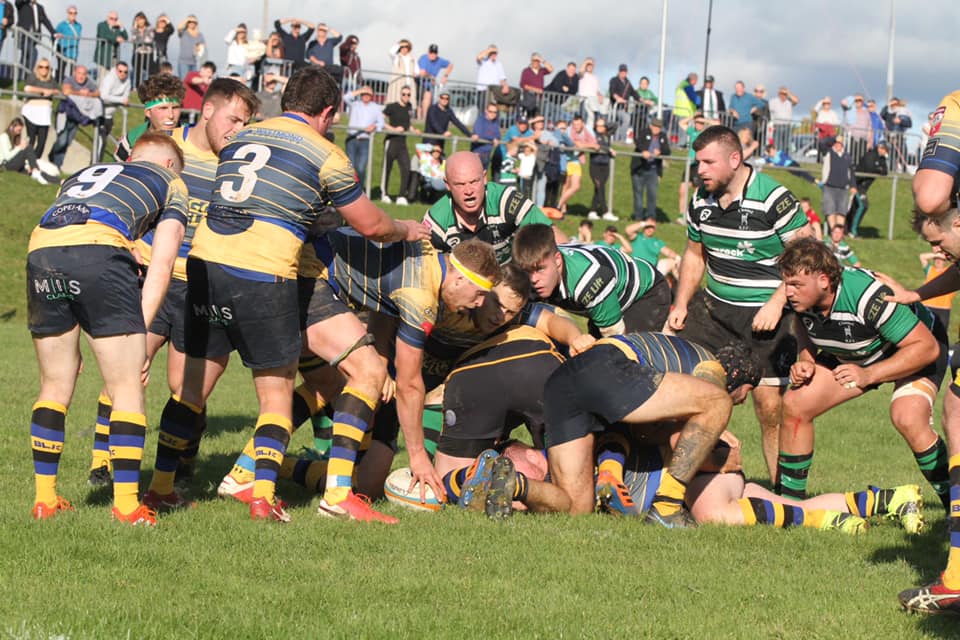 Round two’s local derby in Cork went the way of Midleton, who battled their way to a 14-6 win over Sunday’s Well. They had two unanswered second half tries in the form of a penalty try and a late Denis Broderick effort.

A large crowd at Towns Park watched the ‘Well take a 6-0 lead into the break. Centre Eoin Geary landed penalties after 10 and 36 minutes, but they were second best in the forward exchanges.

Midleton were dominant at scrum time, had the lineout’s best operator in Broderick, and were also getting the better of the breakdown battle.

The hosts’ decision-making let them down at different stages, with kickable penalties turned down and then handling errors costing them a likely try.

Midleton’s patience was thoroughly tested as the ‘Well’s fiercely-determined defence held on, even when down to 13 players for a couple of sin-binnings.

But the breakthrough eventually came for the Red Devils in the 71st minute. The ‘Well failed to deal with a kick through and the Midleton pack took over, hammering away to force a penalty try.

Charlie Murphy’s superb turnover penalty had the ‘Well pinned back again, and a strong collective drive from the Midleton forwards got them over the whitewash with lock Broderick grounding the ball.

Stuart Lee’s subsequent conversion proved to be an important one as it put more than a converted score between the teams. The ‘Well rallied and Midleton needed Richie Daly’s last-ditch tackle to deny the visitors a try.

A last-minute drop goal from out-half Sam Burns saw Tullamore make it back-to-back wins. They had a successful trip to Tyrone as they came away from Omagh Academicals as 19-16 winners.