There were home wins across the board in Division 2B of the Energia Men’s All-Ireland League, with Greystones sitting a point clear at the summit.

Belfast Harlequins had to stave off a strong second half fightback from Malahide before making certain of their 28-24 win at Deramore Park.

Captain Mark Glover pointed the way for Neil Doak’s men, running a terrific try from his own break up the right wing, with 10 minutes on the clock.

Centre Paul Kerr converted and added a penalty, before Malahide fell 15-0 behind when ‘Quins flanker Eddie Gorrod powered over past two defenders just before half-time.

Malahide’s Brendan Guilfoyle, who featured at number 8, and his fellow coaches worked their magic during the interval, as the Dubliners looked a different team on the restart.

A Guilfoyle try was the first of four scored as Mals led 24-18 by the hour mark. However, ‘Quins wrestled back control with flanker Jaz Andress crossing and Kerr taking his kicking haul to 13 points.

There was more home success at Stradbrook where Blackrock College, wearing their red away jerseys, kept Galway Corinthians try-less in handing them a 19-6 defeat.

‘Rock, who led 12-0 at the break, had tries from captain Brian Colclough, Hugo Godson-Treacy and Roghan McMahon. Two Dylan Keane penalties were the only scores for Corinthians.

Conor O’Shaughnessy was the toast of Crowley Park after his 65th-minute penalty guided Galwegians to a hard-earned 23-22 victory over Connacht rivals Ballina.

New ‘Wegians head coach Ja Naughton gave All-Ireland League debuts to 12 players and they will all be pretty battle-hardened after this feisty provincial derby.

A lone penalty from Darragh Whyte had the visitors leading until the floodgates opened during the second quarter. Captain Kieran ‘Dint’ Downey’s barged over to put Galwegians ahead.

On the half hour mark, Naughton’s charges worked the ball wide for winger Darragh Kennedy to claim the second try, which went unconverted at 12-3.

An O’Shaughnessy penalty appeared to cancel out some of the damage caused by Ballina’s opening try – a powerful finish from prop Conor Mason – but the Moy men had other ideas.

Right on the stroke of half-time, the Ballina centres blazed through the middle and Calum Quinn broke two tackles to scoot in under the posts. Whyte kicked the levelling conversion for 15-all.

The second period was a real battle royale, with neither side giving an inch. When Ballina entertained ‘Wegians in the Connacht Senior League recently, they were convincing 33-12 winners.

The Mayo club retook the lead early on when an O’Shaughnessy kick that got caught in the wind was ruthlessly punished. Winger Ian West gobbled it up and sped past a couple of tackles for a smartly-taken seven-pointer.

Much to the big home crowd’s delight, Galwegians hit back in the 47th minute. O’Shaughnessy seized upon a loose pass, lock Ben McGuinness chipped through, after good work from flanker Brian McSweeney, and scored in the corner. 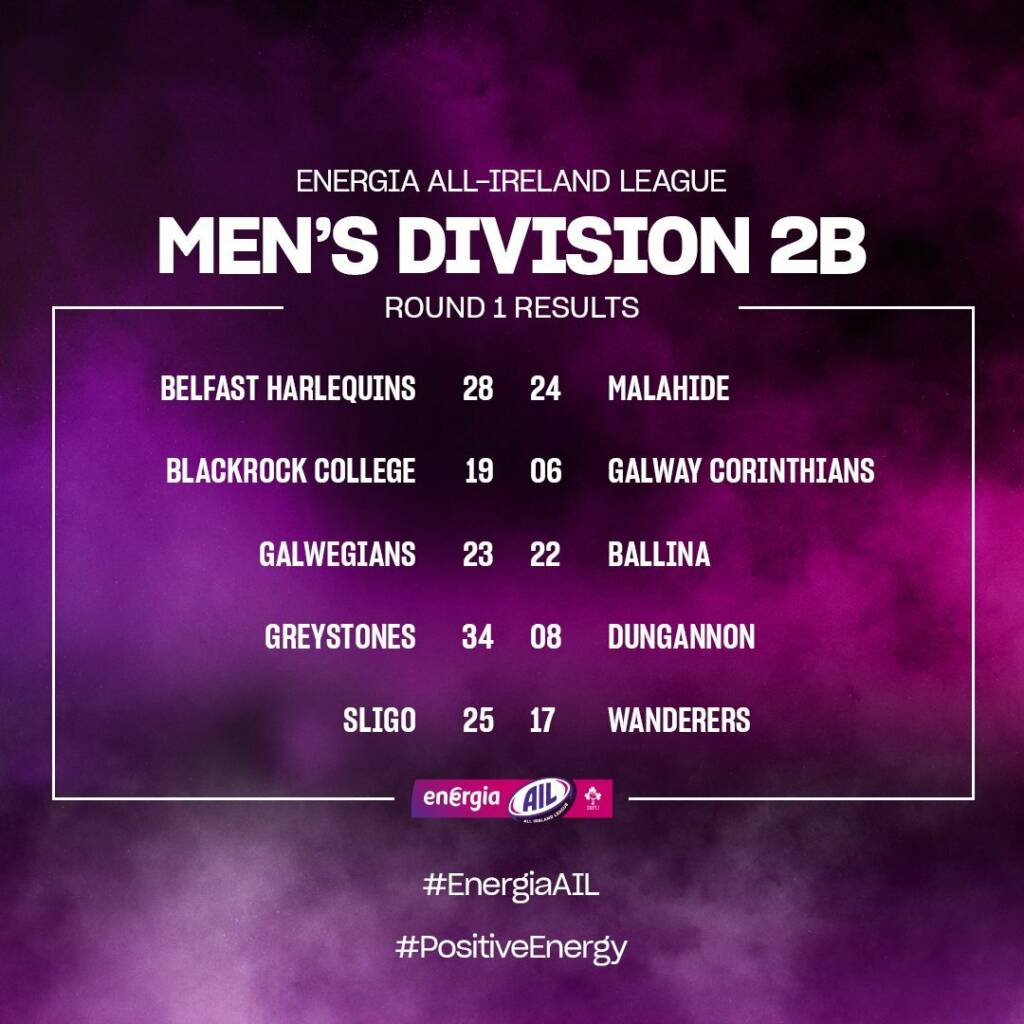 The pace was frenetic and hardly slackened, the key moment coming early in the final quarter when full-back O’Shaughnessy split the posts with a fantastic strike from 40 metres out.

It was a very satisfying first day out for Kevin Lewis’ Greystones who moved straight to the top of the table after defeating Dungannon 34-8 at Dr Hickey Park.

Out-half Killian Marmion finished with 14 points – a try, three conversions and a penalty – and ‘Stones’ other tries were shared out between Mark Myler, Eoin Marmion, Ferdia Kenny and replacement Andy Kealy.

The visitors also had a try ruled out for a knock-on, leaving them 12-3 behind at half-time. Winger Matthew Montgomery’s intercept score was little consolation in the end.

Three well-taken tries, coupled with 10 points from Euan Brown’s boot, made it a job well done for Sligo. They got the better of Wanderers on a 25-17 scoreline in Strandhill.

The Chaps were first out of the blocks, their big ball-carrying forwards making headway and prop Shane Moynihan broke through for a seventh-minute try, converted by Rob Mullan.

Sligo got their pacy back-three involved as much as possible, with a penalty from out-half Brown closing the gap midway through the first half.

Five minutes later, the hosts were celebrating their opening try of the league run. Their new player-coach Josh Reeves, a Brazilian international, did all the damage in the build-up.

Reeves opened up the Wanderers defence with a sidestepping run off a scrum, and he linked brilliantly with Enda Gavin as a well-timed offload put his centre partner over to the left of the posts.

Full-back Guilherme Coghetto showed his pace to run in an intercept try, five minutes before half-time. Brown’s conversion made it 15-7 heading into the break.

A maul try lifted Wanderers, early in the second half, and despite some sustained Sligo pressure, Eoin Sheriff’s side moved ahead with a 65th minute try out wide from Cathal Martin.

Leading Sligo’s response, hooker Matthew Earley was tackled into touch as he tried to score from a Reeves pass, but a brilliant touchline penalty from Brown gave the Connacht outfit a one-point lead.

It was still all to play for until Sligo conjured up a memorable match-winning try. Prop Pedro Bengalo’s rip in the tackle won back possession, which Connacht prospect Hubert Gilvarry used intelligently.

Eoin Ryan took play down the blindside, setting up quick ball and Reeves released Brown on the inside to race towards the Wanderers’ line. The supporting Phillip Carter did really well to hold onto the final offload and dive over in the corner.

Brown swung over the conversion for good measure, as Sligo gained revenge for a 28-20 defeat on Wanderers’ last visit to Hamilton Park. Reeves’ squad travel to Dungannon next Saturday.