There were four home wins and a draw during Division 2C’s opening round in Energia Men’s All-Ireland League. Try-scoring bonuses have Enniscorthy and Skerries at the top.

Out-half Gareth Millar took on the mantle of match winner as he kicked 17 points in Bangor’s hard-fought 22-13 victory over Bruff at Upritchard Park.

A fiercely-contested first half ended 6-3 in Bangor’s favour. Millar swung over two penalties – his first after just three minutes – with Bruff full-back Adam O’Dwyer sandwiching in his first effort, in a cross-field breeze.

Bruff should have been ahead at that stage, their lineout maul causing plenty of problems for Bangor. A mixture of Bruff’s overeagerness and the hosts’ determined defending kept the try count at zero.

However, it was all-change early in the second period as Bangor turned the tables. It was now their set piece and driving play that were forcing the issue.

The forwards provided the platform for centre Conor Lusty to burst through the defensive line and score just to the left of the posts. Millar converted to make it 13-3.

Nonetheless, by the end of the third quarter, Bruff had got back on level terms. O’Dwyer drove home a penalty and converted prop Kieran O’Dwyer’s try, which came from a sustained spell of pressure on the Bangor line.

The Bangor pack took up the baton, showing dominance again in the set pieces and rolling mauls. Millar rewarded them with three points, edging the home side back in front at 16-13.

A further penalty from Millar, following a barnstorming run by Adam McCusker that almost resulted in a try, had the Seasiders six ahead with 10 minutes remaining.

While Bangor had cut down on their mistakes, Bruff’s error count rose under the pressure. They misjudged the restart, handing Bangor a scrum on halfway and the shove came to earn a penalty.

Up stepped that man Millar to clear the crossbar with a great kick from just short of the visitors’ 10-metre line. A subsequent miss failed to take the shine off a fine kicking performance.

With plenty of youth in their selection and five AIL debutants included, Enniscorthy set out their stall for the season ahead with a 39-17 bonus point success against Midleton.

The game’s turning point came in the 28th minute when Midleton prop Mark Corby was red carded after catching an opponent with an apparent swinging elbow.

At that stage at Alcast Park, Enniscorthy were 7-0 up. Centre Daniel Pim had run in an intercept try, converted by Ben Kidd, but Middleton went close to scoring from an early forwards-led surge.

Centre Doyle showed his footballing skills to add the third just before the break, and the bonus point was secured in the 55th minute. Full-back Ivan Jacob’s angle of running was perfect when running onto a Davie Murphy pass.

A try from captain Bryan Moore lifted Midleton, but ‘Scorthy pushed on with Kidd tagging on a penalty and Doyle running in his second try to make it 34-5. 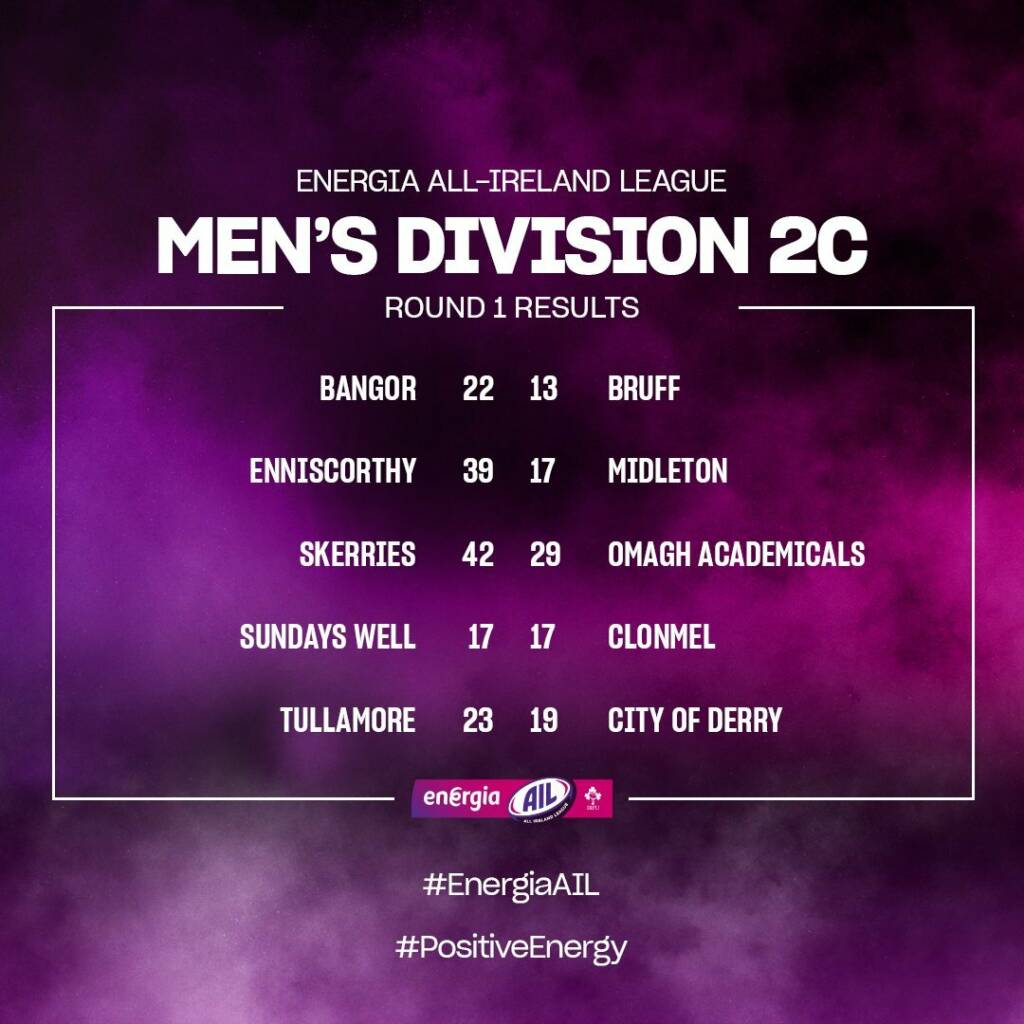 Flanker Niall Parker took their try haul to six in the end, picking up a ball that had squirted out of a ruck and doing really well to stay in play and reach over in the corner.

In one of the games of the day across all divisions, five-try Skerries showed their firepower to overcome Omagh Academicals 42-29 at Holmpatrick.

It was five tries to four at the finish, Omagh looking the better side early on as out-half Kyle Beattie converted his own fast-breaking try and added a penalty.

10-3 became 22-13 by half-time as in-form Omagh winger Ryan Mitchell cut through for a late brace of tries, while Eoghan Carron’s intercept effort kept Skerries in touch.

However, the Dubliners, who were table toppers before the start of the Covid-19 pandemic, upped the ante in the third quarter with some superb swashbuckling attacks and tries.

The best score of the lot started with Paul O’Loghlen chipping out to Mark Oliver on the left wing. He collected the kick at pace, haring past halfway and away from two defenders.

Some excellent offloading and support play followed, the ball going through three more pairs of hands before it returned to centre Colin Doyle who spun out of a tackle to score from 10 metres out.

Out-half O’Loghlen, who had started the second half with a penalty, converted from the left as the fired-up Goats suddenly snatched a 23-22 lead.

The young Accies had no answer as Skerries put together a run of 29 unanswered points. They began the final quarter with flanker Conn Marrey crashing over for another converted try.

O’Loghlen was really putting his stamp on proceedings, another well-judged kick releasing replacement Oisin McKey who finished well to bring the hosts to 35 points.

There was still time for Skerries captain Kevin McGrath to score off a scrum move, and Omagh made sure they took a point home thanks to scrum half Taine Lagan’s bonus point try.

Sunday’s Well and Clonmel shared the spoils in a 17-all draw at Musgrave Park, prop Evan O’Connell barging over for a late levelling try for the home side.

Tries from Josh Featherstone and Cormac Kelleher edged the Corkmen ahead, but Clonmel hit back with five-pointers from Luke Noonan and Luke Hogan, adding to Conor Pearson’s earlier score.

There were six tries and six yellow cards in a very eventful opener between Tullamore and City of Derry. The Offaly men triumphed 23-19 at Spollanstown, with their six league debutants all playing their part.