There are double-headers at three grounds tomorrow as clubs continue to build early-season momentum in the Energia Women’s All-Ireland League.

Preview: Tightening up their defence is top of the list for Galwegians, who entertain a UL Bohemians team that put a combined 132 points on them in their two most recent meetings.

The Blue Belles fell agonisingly short of a losing bonus point at Malone last week. Their best moments were produced by their young back-line who showed an eye for the try-line.

Connemara’s Maria Gorham, who played for Connacht in the recent U-18 Interprovincials, unlocked the defence with a lovely sidestepping 25-metre run for their opening try in Belfast.

They worked the ball wide from a quick tap for Donegal youngster Laoise McGonagle to reach over in the left corner. More of the same will be required if they are to test the high-flying Red Robins.

UL will field an unchanged pack out west, led by in-form prop and captain Chloe Pearse, with the only changes made by head coach Niamh Briggs coming in the back-three.

Aoife Bowman Grangel and Alana McInerney, an Energia AIL Try of the Month winner in January 2020, get their chance to impress on the right and left wings respectively.

The earlier kick-off at noon sees the Galwegians and UL Bohs Women’s teams feature in a double-header with the men’s sides from ‘Wegians and Ballina.

Preview: Beth Cregan boosts the Cooke front row with her presence at hooker this week. The Ulster captain was impressed with some of their new players in round one.

“There are positives to build on despite the defeat to UL Bohs,” she said. “We had some really good defensive sets in the first 10 or 15 minutes. Our set piece gave us a stable platform to play off.

“There were good games from Tamzin and Georgia Boyce, Eimear McQuillan and try scorer Naomi McCord, on their AIL debuts for the club. We’re looking forward to playing Ballincollig.”

Dolores Hughes is promoted from the bench to join Claire Johnston in the centre, while Cregan and McCord, who reverts to the second row, are brought into the tight five by Cooke boss Daniel Allen.

Katie Hetherington, the former Ireland Under-18 Sevens international, takes McCord’s spot at blindside flanker. The 21-year-old was involved with Ulster in the recent Vodafone Women’s Interpros.

Meanwhile, for Ballincollig’s first away trip since their historic return to the AIL, head coach Fiona Hayes has made seven personnel changes to the side that beat Suttonians 14-13.

Eimear Perryman and Eimear Minihane are introduced to the back row, the latter recently making her Munster senior debut at the age of 20. Sarah O’Donovan also comes into the engine room. 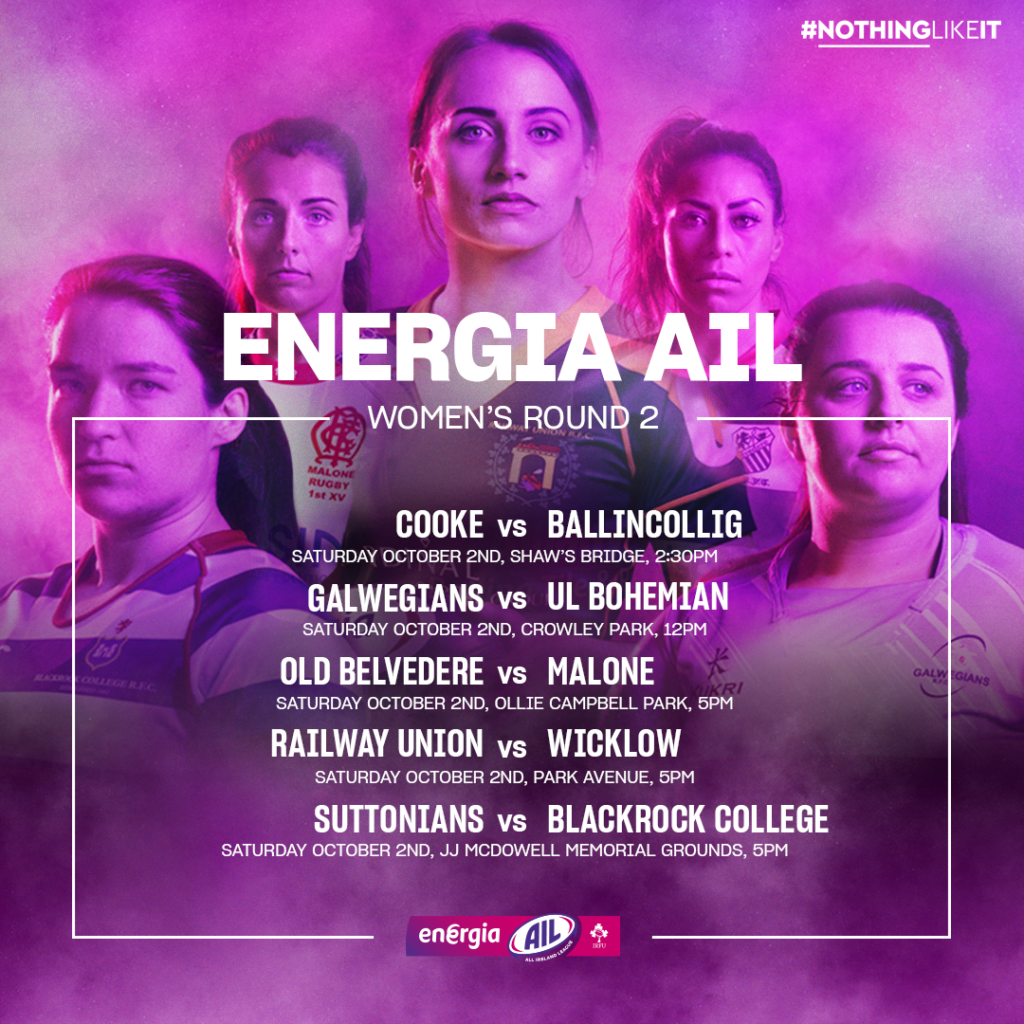 Preview: Ireland Sevens call-up Erin King is one of five personnel changes made to the Old Belvedere team for their second round clash with Malone, who were also victorious first time out.

King, Ivanna Dempsey and Leinster lock Elaine Anthony are brought into the Belvedere pack. Jemma Farrell returns at scrum half with Laura Carty shifted from the bench to the right wing.

Talented Blessington teenager King is a promising player in both 15s and Sevens. ‘Belvo head coach Johnny Garth has been impressed with what he has seen of her so far.

“Erin joined us last year and whilst she is contracted to the Ireland Sevens team, we are hoping that she will be available for us from time to time,” he explained.

“She is still in her final year at school, however her age belies her understanding of the game – she is blessed with good strength, very good basic skills, and has an excellent tackle technique and knowledge of her defensive roles.

“She will be a nuisance at the breakdown for the opposition. She will have a great future in the game.”

Neve Jones is straight back in from international duty, featuring as one of four personnel changes to the Malone side that won 25-17 at home to Galwegians.

The 22-year-old’s presence in the front row gives the Cregagh Red Sox a huge boost. Holly Brannigan, a try scorer in round one, is promoted from the bench to full-back.

Malone’s new head coach Jamie McMullan has moved captain Peita McAlister to inside centre, a switch which accommodates the inclusion of the strong-running Alexa Grudgings at number 10.

McMullan commented: “I’ve very positive aspirations for the season, however, what I have spoken to the players about consistently is enjoying the opportunity and making the most of it.

“It’s been a long time since these ladies have had the opportunity to go out and enjoy playing club rugby regularly with their friends.

“After a slightly disrupted pre-season, the first few rounds of the league for us are about focusing largely on our game and how we want to make the most of the talent we have through the way we play.”

Preview: Following last week’s winning start at Blackrock College, Railway Union welcome back a number of Ireland 15s and Sevens internationals for their first home game of the season.

Ireland Sevens regular Claire Boles slots in at number 8, following an energetic ball-carrying cameo in the champions’ 25-11 bonus point victory away to Blackrock.

Enniskillen native Boles said: “It’s just about trying to build on last week’s performance, keep pushing on and getting better throughout the season. It’ll be exciting for everyone to play game two.

“It doesn’t even feel real, it’s been so long (since our last home match). At the same time, you’re still getting back at it. Everyone trained so hard over lockdown and put their all into it.

“Rugby was always on your mind – you’re always going to go back to it. So it’s really exciting (to be back playing), all the girls are buzzing.”

Another of the Sevens internationals, Katie Heffernan, pairs up with Canadian teenager Maggie MacKinnon in midfield, and scrum half Ailsa Hughes is the sixth and final change. Grace Moore and Anna McGann also strengthen the hosts’ bench.

Wicklow will not be too downbeat after their loss to Old Belvedere. They shipped 63 points to one of the league’s standard bearers, but showed enough to suggest that they will be competitive in the bottom six.

Five players who were part of Wicklow’s Under-18 squad last year lined out against ‘Belvo, so it will take time for them to bed in at this level and produce consistent performances.

Head coach Jason Moreton has made two changes for their first league trip to the capital. Sarah Gleeson will start at inside centre, with the blindside flanker berth filled by Karen Douglas.

Preview: Having conceded 18 unanswered second half points to Railway Union, Blackrock missed out on a winning start so this trip to Sutton is a crucial game to get them back in the top half of the table.

Head coach Ben Martin’s selection options have increased considerably this week, with the availability of a number of provincial and international Sevens players.

Former Ireland 15s international Jackie Shiels will steer the ship from out-half, while Emma Hooban – a try scorer for Ireland in the Six Nations earlier this year – makes her first appearance of the campaign at hooker.

There is a Blackrock debut for highly-rated Leinster U-18 captain Aoife Wafer, another of Anthony Eddy’s Sevens call-ups. The Enniscorthy RFC starlet certainly has a bright future ahead of her.

Wafer gets the nod at blindside flanker, and the ‘Rock bench has also had a couple of notable additions – Leinster senior skipper Christy Haney and Ireland Sevens prospect Meabh Deely, who is poised for her AIL bow.