Old Belvedere and Naas have the honour of kicking off the new Energia Men’s All-Ireland League season, as they serve up the Friday Night Lights fare in Division 1B’s opening round.

Naas were second-from-bottom when the 2019/20 season was cancelled, so they will not lack for motivation as they look to recapture their best form under Johne Murphy.

Preview: It has been a testing early season spell for Banbridge, who have shipped some heavy defeats in Ulster. But the AIL brings a clean slate, and head coach Mark McDowell feels they are now on an upward curve.

“There’s a real excitement in camp about the league starting,” said McDowell, who rates new out-half Harry Bird highly. “I know that we’re more prepared than we showed against Ballynahinch, and I think you’ll see that against Armagh.”

Armagh welcomed back Chris Colvin, Kyle Faloon and Josh McKinley from injury last week, and Chris Parker’s men are targeting a full 80-minute performance after being ‘well below their usual standards’ in the first half against Queen’s. 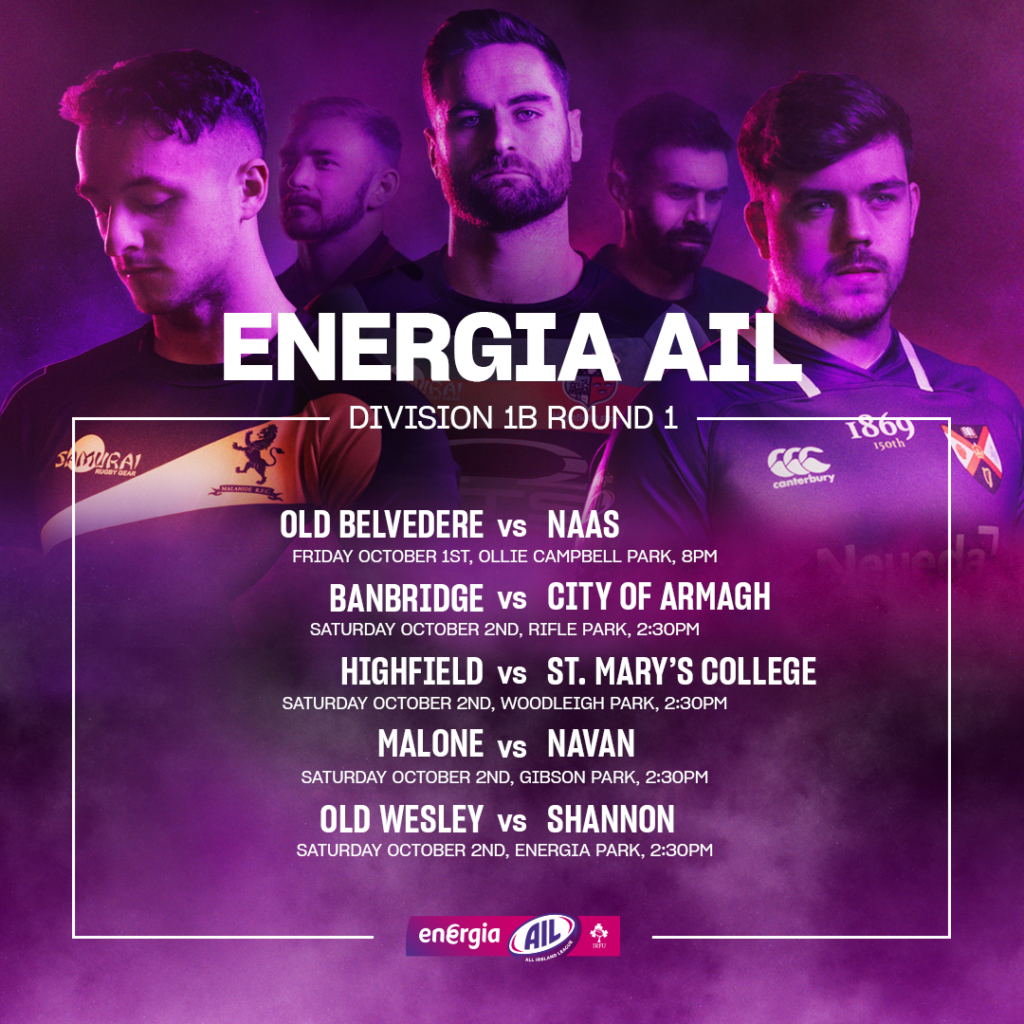 Preview: Highfield are already motoring along nicely this past month, beating the likes of UCC (24-21), Sunday’s Well (51-7) and Old Crescent (32-31). Their maul again is a serious weapon.

Paul Stack and Luke Kingston provide the threat out wide for Conor Quaid’s well-drilled side, who were top of the table when Covid-19 cancelled the 2019/20 season.

St. Mary’s welcome back Conor Dean at out-half after his spell with Connacht. Hooker Richie Halpin, who gets a full crack at the captaincy, and number 8 Ronan Watters have a vital presence in the pack.

Preview: Malone were pushing for a top-four finish 18 months ago, so they are understandably eager to get back on the horse – despite a lengthy injury list at the moment.

South African back rower Teigan Erasmus has joined the Cregagh Red Sox and could prove to be a key signing. Goal-kicking winger Rory Campbell is a classy operator, as shown by his recent match-winning heroics against Queen’s.

The Harris-Wright brothers, assistant coach Jason and S&C coach Jonny, have been whipping Navan into shape. Refreshed and with most of the squad retained, Ray Moloney’s charges look in better fettle this time around.

Preview: The McCoy Tucker trophy – played for in honour of late club stalwarts Doug McCoy and Colm Tucker – will be the reward for whoever comes out on top between Old Wesley and Shannon.

Shannon make the trip with new coaches at the helm in Pat O’Connor, the former Clonmel supremo, and Stephen Keogh. Together with S&C coach Will Hughes, director of rugby Pat Brown believes the trio ‘will really bring us to the next level’.

Wesley, who lost 17-10 at home to Shannon in February 2020, have had a fresh influx, with six senior debutants in action recently. They are well prepped after some solid run-outs against top-flight opposition.