A live-streamed match between the last two title-winning teams – Lansdowne and Cork Constitution – is a fitting way to launch the new Energia Men’s All-Ireland League Division 1A season.

Preview: Clontarf hosted a dress rehearsal for this game a fortnight ago, a late touchline kick from Conor Kelly seeing ‘Tarf pip the students 27-26 in a Leinster Senior League clash.

Andy Wood’s men lost the subsequent final 34-13 to Lansdowne, but their noted strength-in-depth – improved again by new signings Martin Moloney and Max Kearney – should see them challenging again for Division 1A honours.

Preview: Ulster Academy and Ireland Under-20 lock Harry Sheridan is set to feature in the second row for Dublin University, as they open their top-flight campaign against Garryowen.

Mick O’Kennedy and Louis O’Reilly lead a typically attack-minded back-line. Trinity are often slow starters in the league, but they did beat Garryowen 37-19 in the opening weeks of the 2019/20 season.

Keith Wood’s son Alex, a try scorer from full-back against Bruff recently, is one of the Light Blues’ newcomers, along with James Kendrick, a real tank of a prop signed from Cashel. 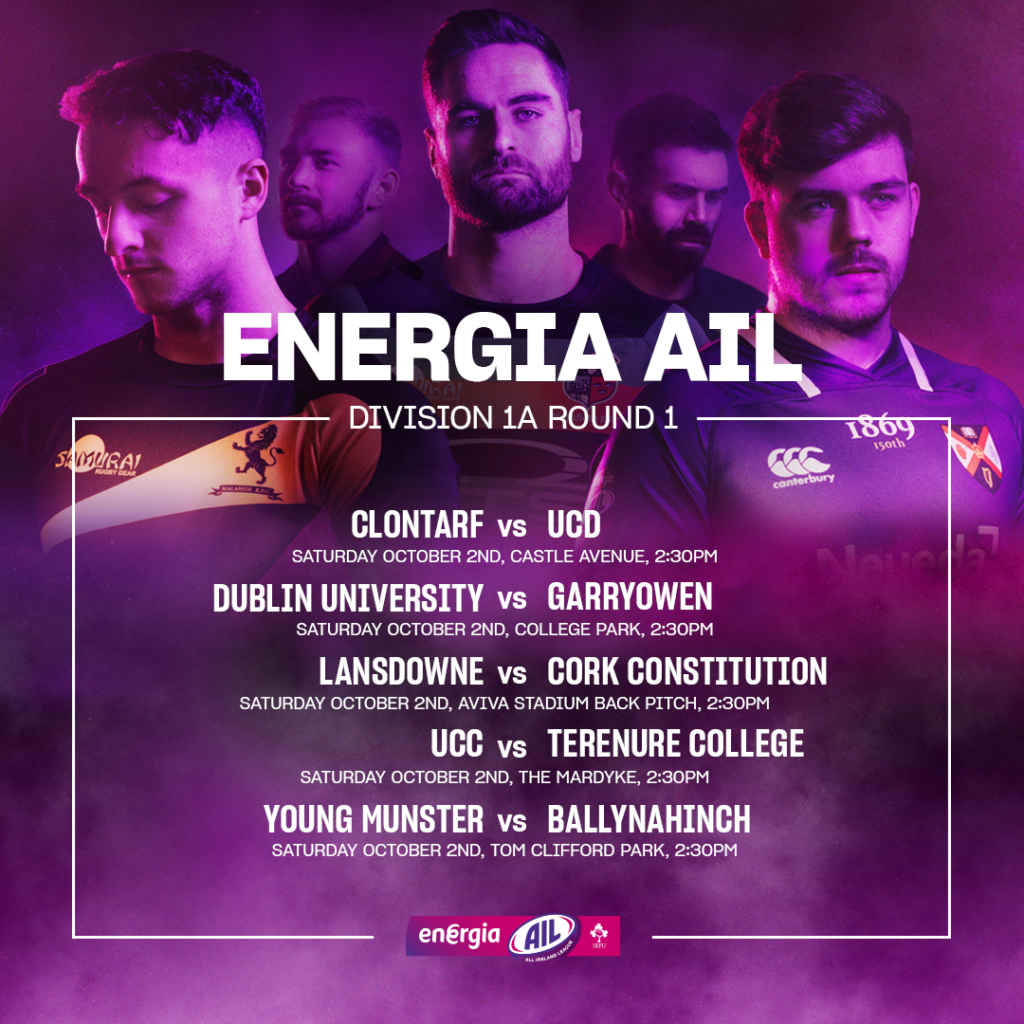 Preview: Lansdowne will test out some new combinations tomorrow, with Peter Hastie and recent debutant Jack Matthews at half-back, while former Buccaneer Corey Reid combines in midfield with Paul Kiernan, the ex-UCC captain.

The headquarters club, who are live-streaming the game, also welcome back flanker Clive Ross from his time in Ulster. They are hoping to topple Cork Constitution, who were unbeaten and shaping up to be 2020 champions.

Supported by old hands Niall Kenneally and Gerry Hurley, Con’s new captain Aidan Moynihan told IrishRugby.ie: “It’s a heavyweight clash. Lansdowne are always a ferocious side to go up against. They’re deadly on the back pitch at the Aviva and mad things always seem to happen on the astro turf.”

Preview: Terenure College’s 14-12 victory at the Mardyke was one of the last top-flight games played before Covid-19 struck. They make the return trip with even loftier ambitions.

A savvy period of recruitment has seen ‘Nure bring in Jordan Coghlan, James Connolly and Colm de Buitlear – all provincially-capped players – as well as Alan Bennie and Andy ‘Panda’ Keating.

It is always quite a balancing act for the University clubs in autumn. Having Alex Kendellen, Scott Buckley and Edwin Edogbo – all Munster prospects – available would be a big boost to UCC.

Preview: It has been a busy start for Gearoid Prendergast’s Young Munster, who won the delayed 2021 Munster Senior Cup final in August before reaching this season’s last-four, most recently.

Returning to Division 1A action, Prendergast said: “It’s been a long time waiting for it, we’re champing at the bit. We’ve had some challenging games – hopefully they’ll stand to us – but the AIL is a different beast. We’ve prepped accordingly.”

Ballynahinch come in on the back of a 43-8 Ulster Premiership win over Banbridge. They have two sets of brothers in their pack, John and Thomas Donnan behind Kyle and Zack McCall, ‘Hinch’s 26-year-old captain, in the front row.