As important as it was to come out on top against host nation Italy in Parma, Ireland head coach Adam Griggs is blissfully aware that there is another big step to come at the same venue this coming Saturday.

Having dug deep to overcome the Azzurre in their own backyard, Ireland will next face Scotland in the final round of the fiercely-contested Rugby World Cup 2021 Europe Qualifier tournament.

With all four teams – Spain complete the set – on five points heading into the closing day of fixtures, the hunt for a place at next year’s World Cup in New Zealand is expected to intensify.

Speaking after last Sunday’s game, Griggs said: “That was the message as soon as we huddled together. We were making sure that there was another step on this journey next week and there’ll be no complacency from the group.

“The biggest thing you saw at the end of the game was a bit of relief. It has been a tough week. People have made plenty of comments about our performance and everyone was talking about the pressure we’re under.

“I think you saw a group of players who have worked tirelessly through the week and hit the result that they were after.

“They’ve got to enjoy these moments, when you can be on top. We’ll make sure they do that and then we’ll be back to business.”

From Griggs’ point of view, the 15-7 triumph over the Italians represented another major step in the evolution of 19-year-old winger Beibhinn Parsons.

In addition to scoring her seventh try in 13 international appearances during the opening half, she embarked on a blistering run that paved the way for Amee-Leigh Murphy Crowe to cross the whitewash just past the hour mark.

Griggs had been looking for the Ballinasloe flyer to go looking for work rather than simply being stationed on the left wing. He believes there were signs of that throughout the course of the second round contest.

“You’ve got to remember Beibhinn is 19-years-old, so there’s still plenty of learning for her in the game,” he acknowledged.

“She’s producing some really good x-factor highlight moments, but in the nitty gritty of tight, close games you definitely need to make sure she’s making an impact in other areas of the field.

“We spoke to her this week around her positioning. Someone in the back-three, whether it’s in the middle or on the edge, you don’t want to let the game go by.

“We put a target for her, she needs to be on the ball at least within four or five phases. If it hasn’t come to her edge, she can go looking for that.

“She’s not the finished product yet. While she does produce some really spectacular moments, there’s still plenty for her to carry on working on.” 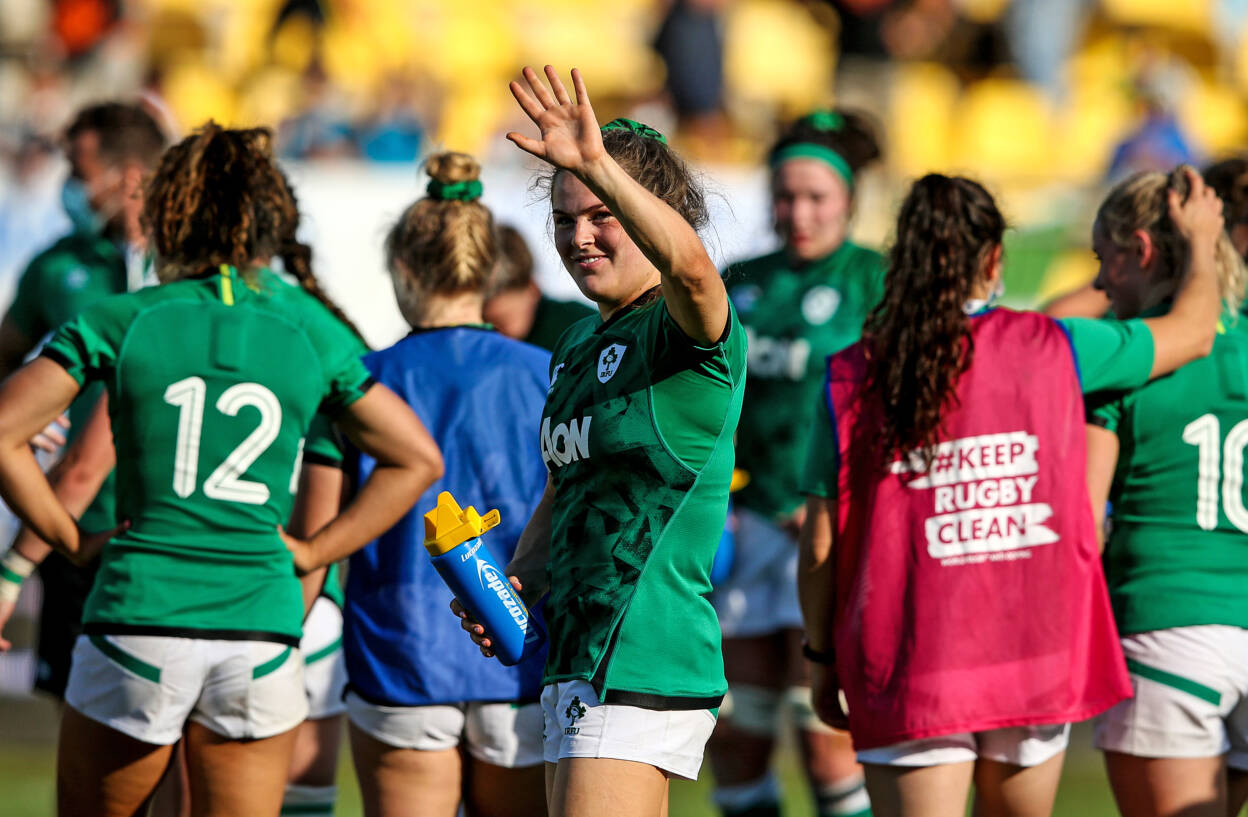 As one of four changes to the side from the Spanish match, Griggs handed a first start to Wasps’ Sam Monaghan, alongside Nichola Fryday in the second row.

Her debut against Spain did not quite go according to plan, with the Meath woman spending time in the sin bin not long after being introduced as a second half replacement.

Nonetheless, Griggs backed Monaghan to deliver a big performance and was satisfied that she managed to do just that.

“She showed the potential that we have seen through training camp. I know last week it didn’t go her way and she had to spend 10 minutes off the field.

“We’ve seen Sam be that involved in games before and I’m delighted for her, because she showed that she can compete at this level and none more so than one of her last tackles.

It was such a dominant hit to put that Italian player in touch. It shifted momentum for us again, where they were on the attack.

“I thought Sam had some great moments and she’s only going to get better. That’s her second game at this level. Imagine her with more time with the group. I was delighted for her.”

Whereas Monaghan’s international career is only getting started, Lindsay Peat and Claire Molloy are established figures at this level with Ireland.

During a sticky period in Sunday’s closely-fought encounter, the experienced duo appeared off the bench to win their 36th and 72nd caps respectively.

Knowing that there was likely to be very little between the two teams, Griggs felt Peat and Molloy’s know-how and big-game temperament were always going to be major assets for his side.

“That’s what we set out to do. We knew we had experience on the bench. We knew the game would be tight. There wasn’t going to be any easy moments,” he added.

“We felt this week that Lindsay and Claire were going to be perfect to do that. I think they both came on and made an outstanding contribution.

“They showed their leadership, showed their experience. Keeping cool heads and were nice and calm with the messages that were brought on. Really happy with their impact.”