Following their 8-7 defeat to Spain at the same venue six days earlier, Ireland were searching for a victory to keep themselves in contention for a spot at next year’s delayed tournament in New Zealand.

While tries from wingers Beibhinn Parsons and Amee-Leigh Murphy Crowe – as well as five points from the boot of Stacey Flood – accounted for their tally on the day, Griffin feels their work out of possession also proved key.

“We did a lot of work this week in terms of defence with Kieran (Hallett, Ireland defence coach) and our line speed,” she remarked at the post-match press conference.

“Because we had that line speed to shut down the space and win that gain-line, either in attack or defence. As a group we’re composed in our defensive structure, there’s a lot of organisation there.

“To be honest, it’s just fulfilling our defensive system. You saw that today, it worked well. Quite composed in our defensive line.

“Numbers there, getting off the line. Working, disrupting rucks. Comparing last week to this week, we definitely fulfilled our defensive system better.”

The diligence of the Irish defence was on full display in the closing minutes of the first half, when Italy were camped inside the opposition 22 but could not come away with the try that they so badly craved.

Griffin had a big defensive moment of her own during this juncture of the play, while the likes of Flood and Eimear Considine were also putting their shoulders to the wheel.

That was literally just fulfilling our system, if anything. It’s just adapting to what is in front of you. I think this week we really needed to focus on that. If things change, it’s how you adapt. It’s how you react.

“That was a pure reaction moment and thankfully it paid off. We had the rub of the green there and it paid off.

“We got our line set and kept them out. For our defensive structure, that was a big moment for us.”

Like their opener with the Spanish, Sunday’s game was played in humid conditions. The earlier kick-off made it a bit more of a challenge, but Griffin said that – having been there for over a week now – the squad are now fully adjusted to the weather in northern Italy. 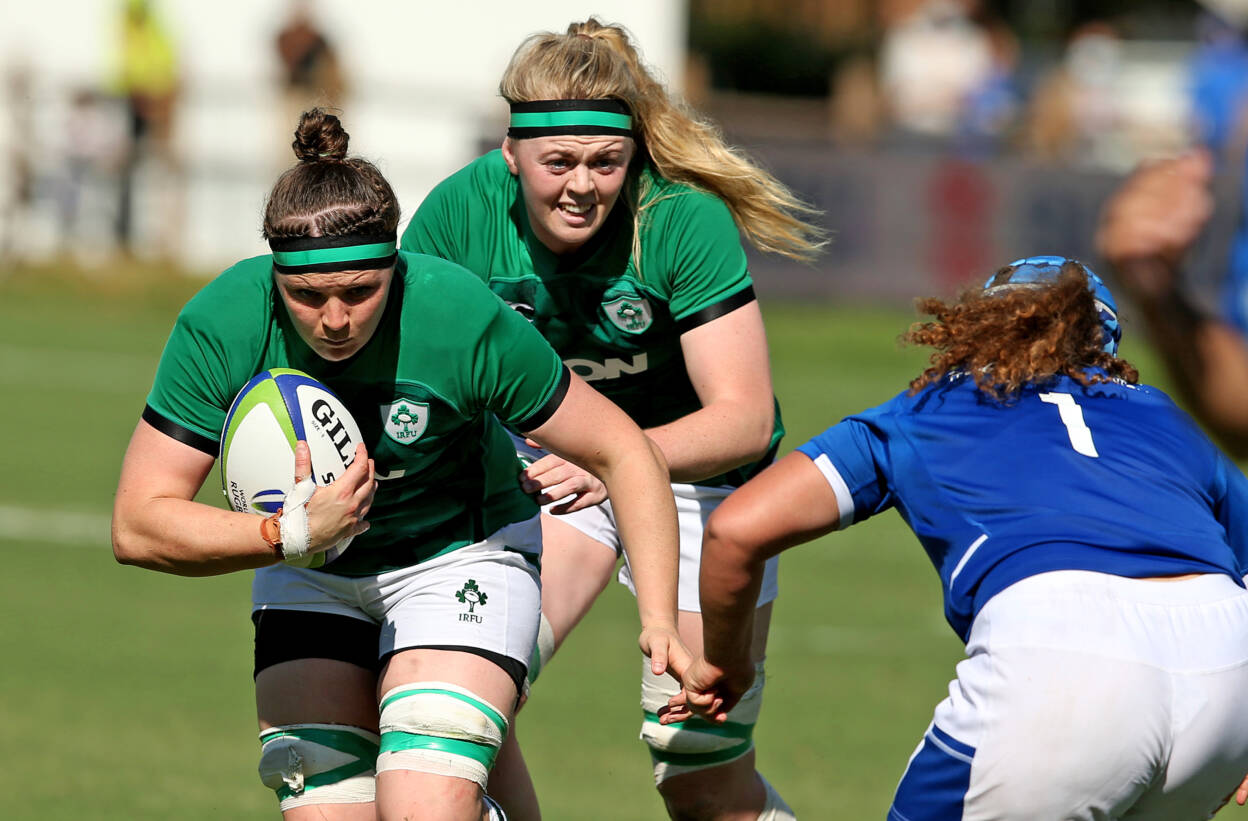 “The sun is warm, but I think this week it didn’t affect us in that we adapted to it. We have that game under our belt under heat, had that experience.

“We trained hard this week at the same time. We got that sun exposure. We knew what it would entail. Thankfully we delivered what we said.”

Hearing the final whistle at the end of what was a must-win game for the girls in green, Griffin admitted there was a sense of relief within the Irish camp.

However, once they made their way back to the dressing room, their attention quickly switched to Saturday’s all-important final round encounter with Scotland (kick-off 5pm Irish time). She added:

There was elation and relief at the end. There was pressure this week in terms of us doing what we set out, practising what we say. We showed today we can do that.

“That squad effort was there and it was a good feeling. You want to celebrate a win, but you saw the flags put away straight away after. We came back in, had our huddle, had our recovery shakes, had our recovery cool down and all that.

“The minute we came back in, it was switch focus onto Scotland prep. If you can’t enjoy your wins? That’s what it’s about too. It’s that mental switch now.”