Half-backs Sam Prendergast and Fintan Gunne led the way as Leinster defeated Ulster 22-15 in Newforge to complete a clean sweep of victories in the PwC IRFU Under-19 Interprovincial Championship.

Andy Wood’s charges had to overcome a stiff challenge from the hosts in order to become 2021 champions. Ross McKay kicked Ulster into an early second half lead (10-8).

However, captain Prendergast converted quick-fire tries from replacement James Doyle and Gunne to give Leinster a decisive buffer.

Prendergast took his tally for the tournament to 25 points, while his Newbridge College compatriot, lock Diarmuid Mangan, crossed in the fifth minute for his third try in as many games.

Leinster exerted the early pressure, Matthew Victory and George Hadden profiting from a counter-ruck to drive up close before Mangan grounded under the watchful eye of referee Dan Carson.

After Prendergast pulled his conversion wide from the right, there were some scrappy phases until scrum half James Wright’s snappy break brought Ulster up to the opposition 22. 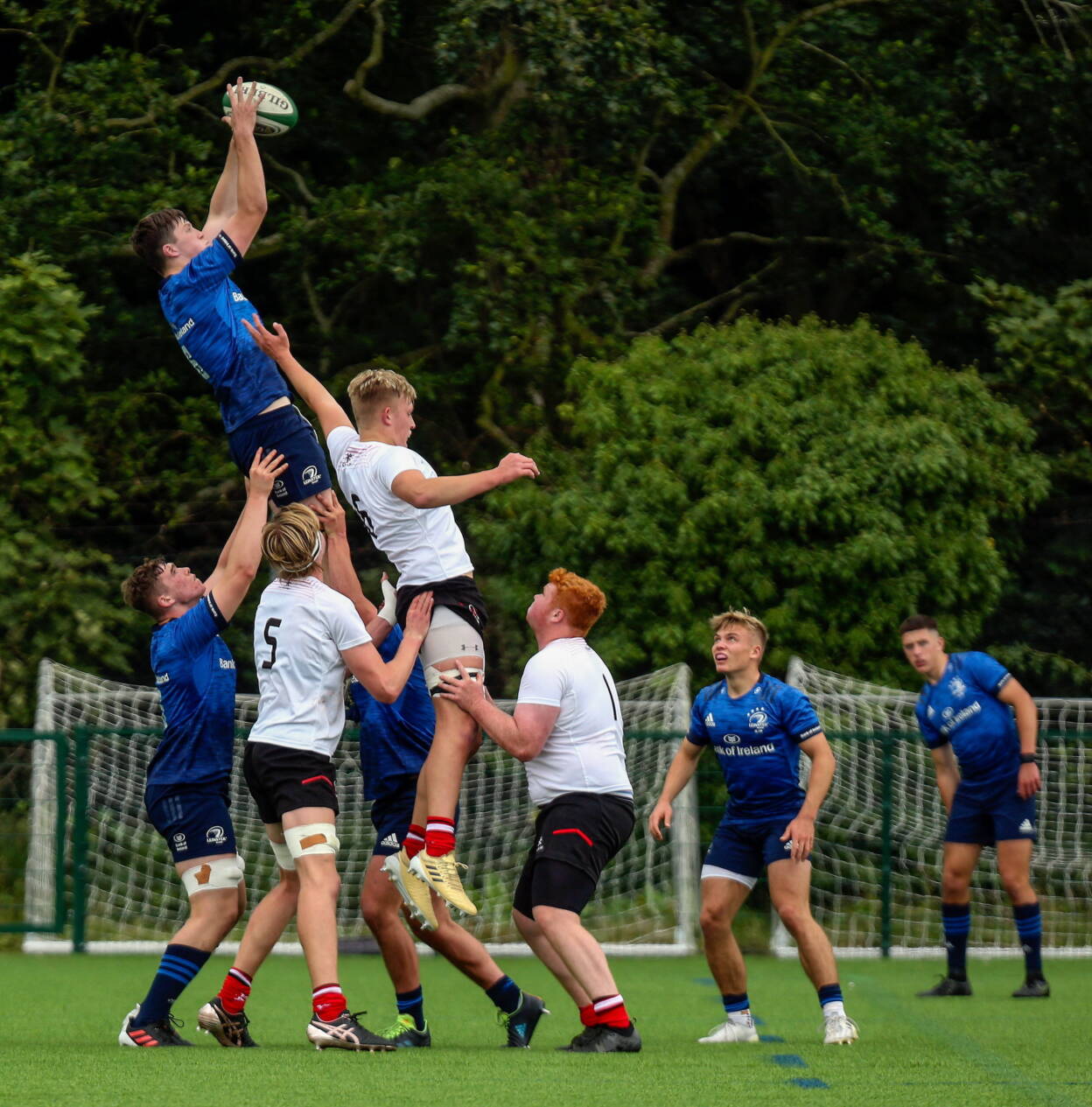 Handling errors prevented both sides from getting into scoring range, but the Ulster forwards clicked in the 26th minute to tee up tighthead Boal’s close range effort, converted by McKay.

A superb lineout maul saw the hosts tear through into the Leinster 22, number 8 Michael Crothers carrying well before centre Ross Taylor did likewise. Andrew Donald then drove within a metre of the line, the quick recycle putting fellow front rower Boal over past David Dooley.

McKay converted, nudging his kick inside the left hand post, but his opposite number Prendergast’s penalty rewarded a late Leinster purple patch as they squeezed into an 8-7 interval lead.

McKay hit back with a brilliant penalty from distance early on the resumption, as good work by the number 10 in gathering his own chip kick, and a strong run by flanker Matthew French, had set the tone for Ulster. 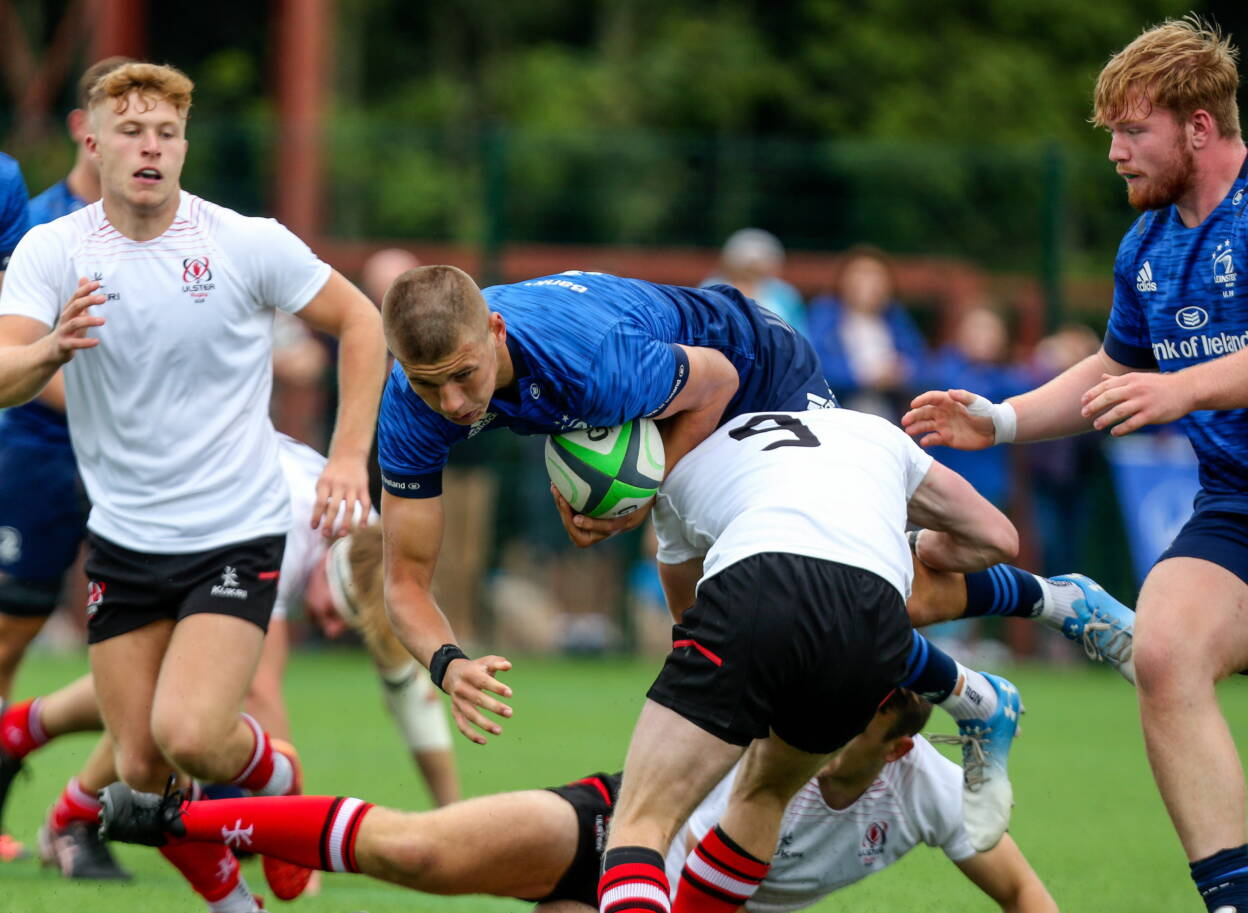 Prendergast hit the post with a penalty in response, but Leinster soon prospered from a loose Ulster lineout. Gus McCarthy scooped up possession at the rear, raided into the 22 and offloaded for pacy replacement lock Doyle to finish off to the right of the posts.

Prendergast converted and also added the extras to Gunne’s try of the game. It was an outstanding solo score from the St. Michael’s College scrum half, who used quick scrum ball on the Leinster 10-metre line to flash through a gap, burn off the chasers, including winger James Campbell, and dart in behind the posts. 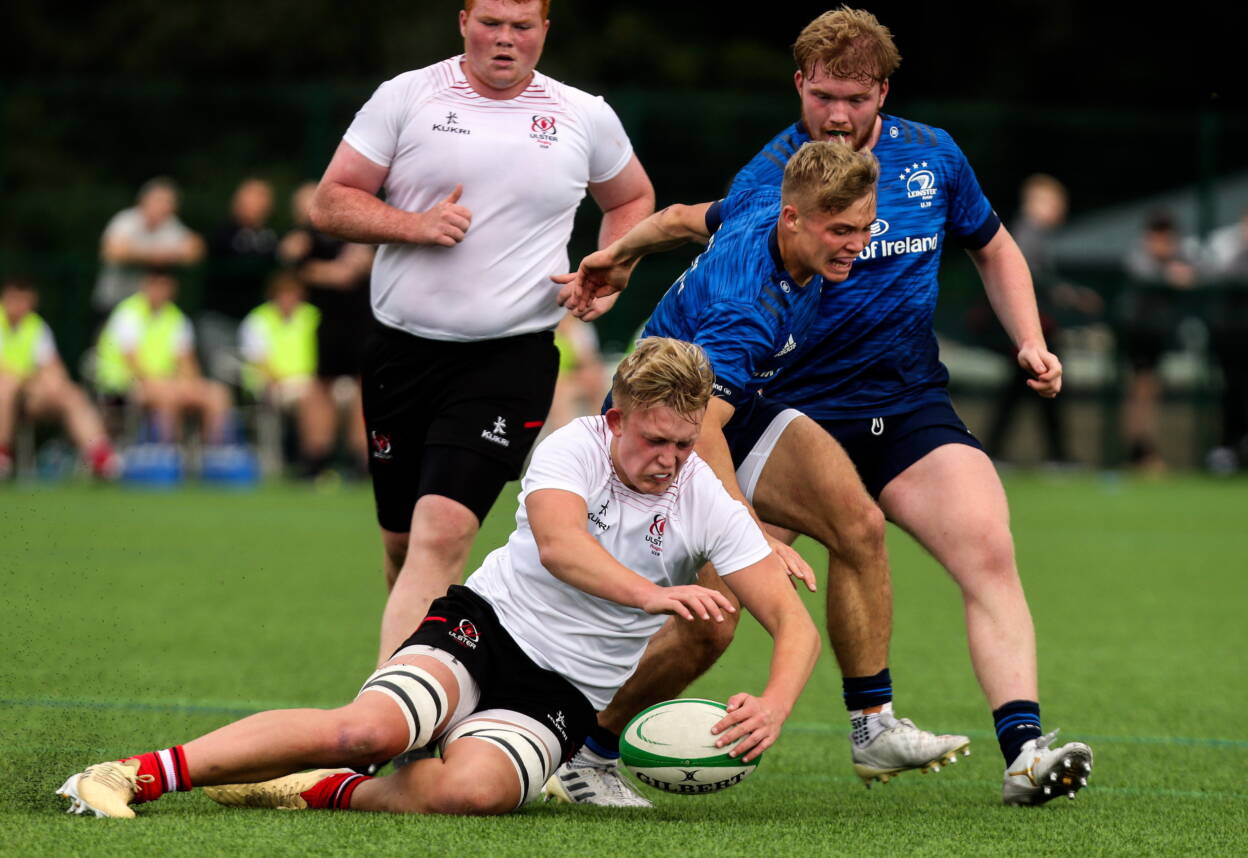 Suddenly, the gap was out to twelve points (22-10) and Ulster had it all to do. Arthur Johnson, their replacement scrum half, lifted his team-mates with a perfectly-placed touchfinder into the right corner and then a sniping break.

Ulster kept chipping away in the dying minutes, and following a Leinster yellow card for Patrick McCarthy collapsing a maul, Angus Robson fed winger Rory Telfer for a muscular finish past two defenders.

McKay’s missed conversion was the final kick of this close and entertaining contest, with unbeaten Leinster finishing top of the table and Ulster now hoping to finish on a winning note in their rescheduled clash with Munster.