Ireland’s seven-man contingent, including try scorers Robbie Henshaw and Tadhg Beirne, made their presence felt in the British & Irish Lions’ 28-10 win over Japan at BT Murrayfield.

The Vodafone Lions 1888 Cup clash was a very useful workout for Warren Gatland’s men, who board the plane tomorrow to begin their tour of South Africa in earnest.

Japan, who play Ireland at the Aviva Stadium next Saturday, trailed 21-0 at half-time as the Lions had tries from Josh Adams, Duhan van der Merwe and Henshaw inside the opening 22 minutes.

However, they cruelly lost captain Alun Wyn Jones to a tour-ending dislocated shoulder on the eve of their departure for Johannesburg. The skipper’s role has been passed to Ireland’s Conor Murray.

In a double injury blow for the Lions, Justin Tipuric’s tour is over due to a shoulder issue. Gatland has called up Wales duo Adam Beard and Josh Navidi.

The ever-threatening Japanese got off the mark during a scrappy second half – replacement Kazuki Himeno’s try was their highlight – but Beirne’s gleeful 48th-minute run-in had the result sewn up. 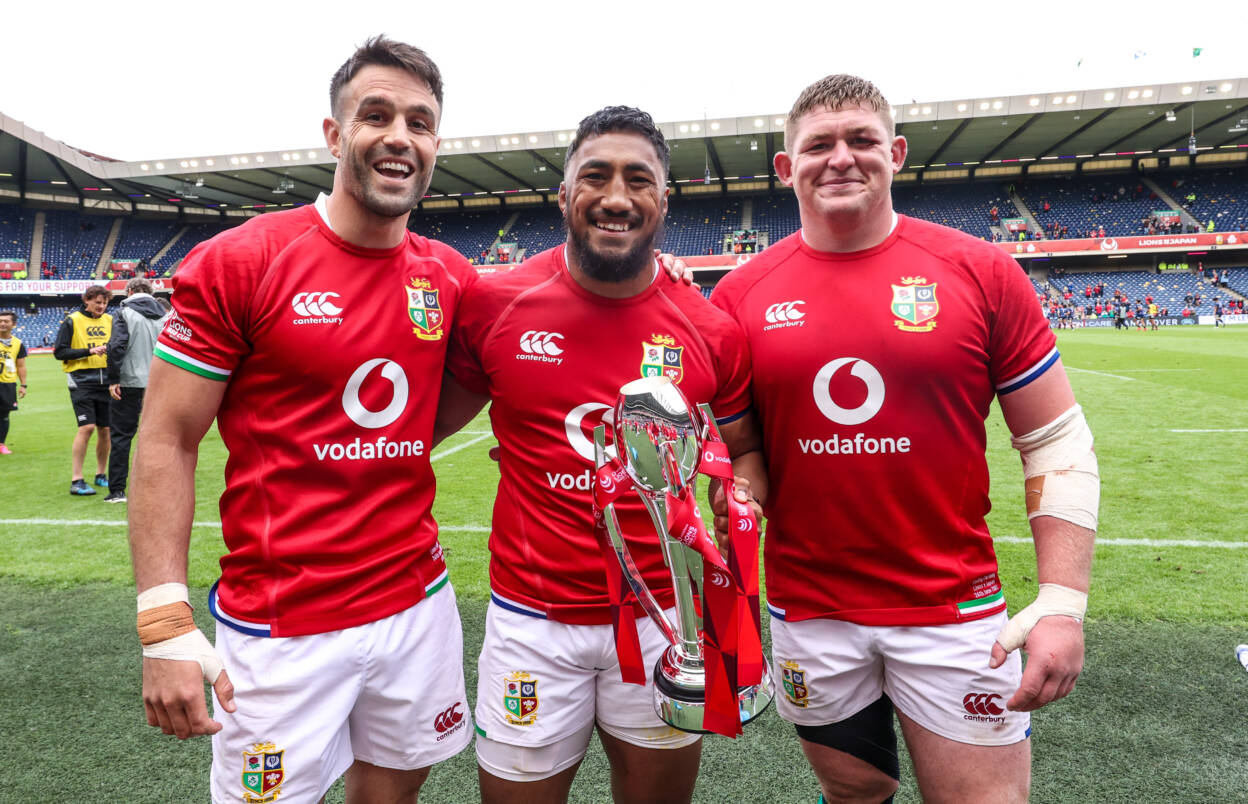 The game marked a first outing in the famous red jersey for Ireland’s Beirne, Jack Conan and Bundee Aki, while Henshaw, Conor Murray, Tadhg Furlong and Iain Henderson already has Lions experience in the bank.

Japan looked sharp early on in front of the 16,500-strong crowd, testing the Lions out wide with Adams and van der Merwe both having to make tackles to force lineouts.

The Irish influence increased when quick lineout ball allowed Aki to break into the Japanese 22. His centre partner Henshaw also carried before Murray’s whipped pass allowed Adams to cut in past Siosaia Fifita for a smartly-finished 11th-minute try. 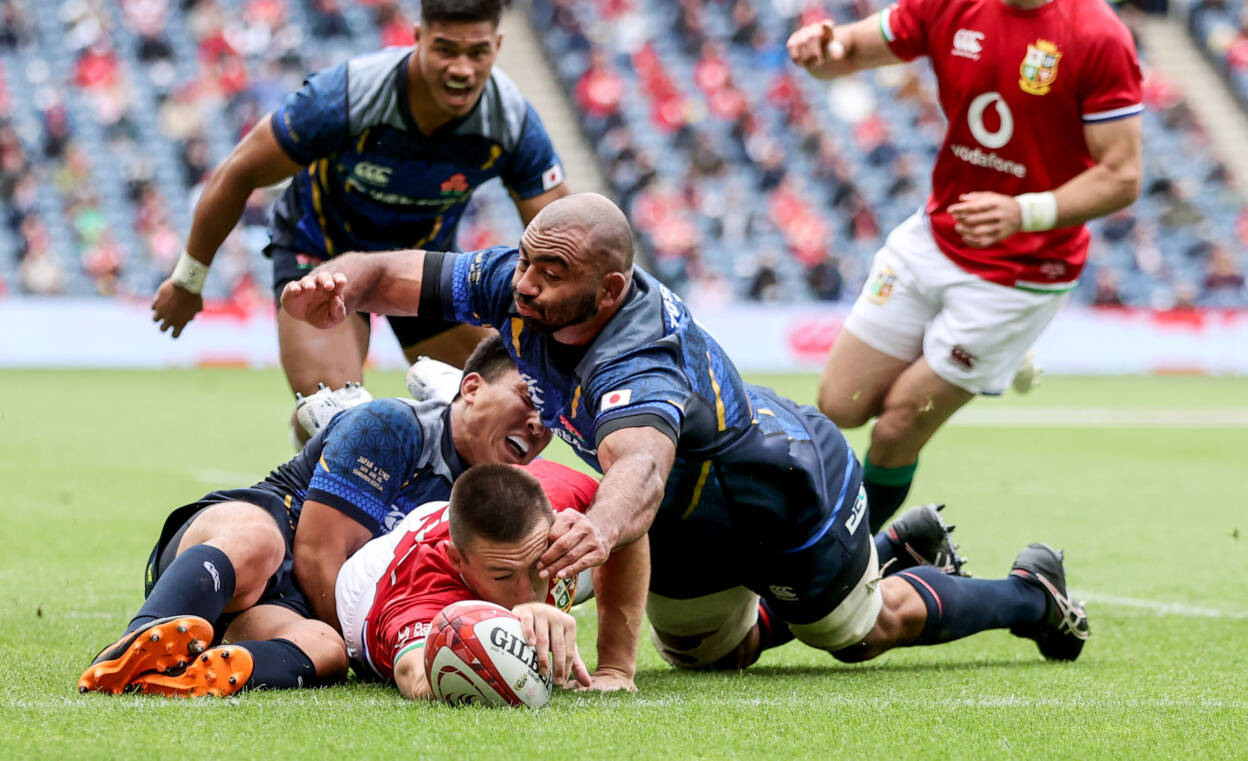 Dan Biggar, the eventual player-of-the-match, added a fine conversion and also neatly came to the rescue from the restart, following a charge-down on Murray.

A second converted try followed in swift fashion when Scotland powerhouse van der Merwe sprung clean through up the blindside of a ruck.

Henshaw had shown good footwork and strength in the build-up, and the Athlone man got his name on the scoresheet soon after. Henderson’s lineout win set up a close-in maul and Murray fed Henshaw for a try-scoring burst in between Matsushima and Timothy Lafaele. 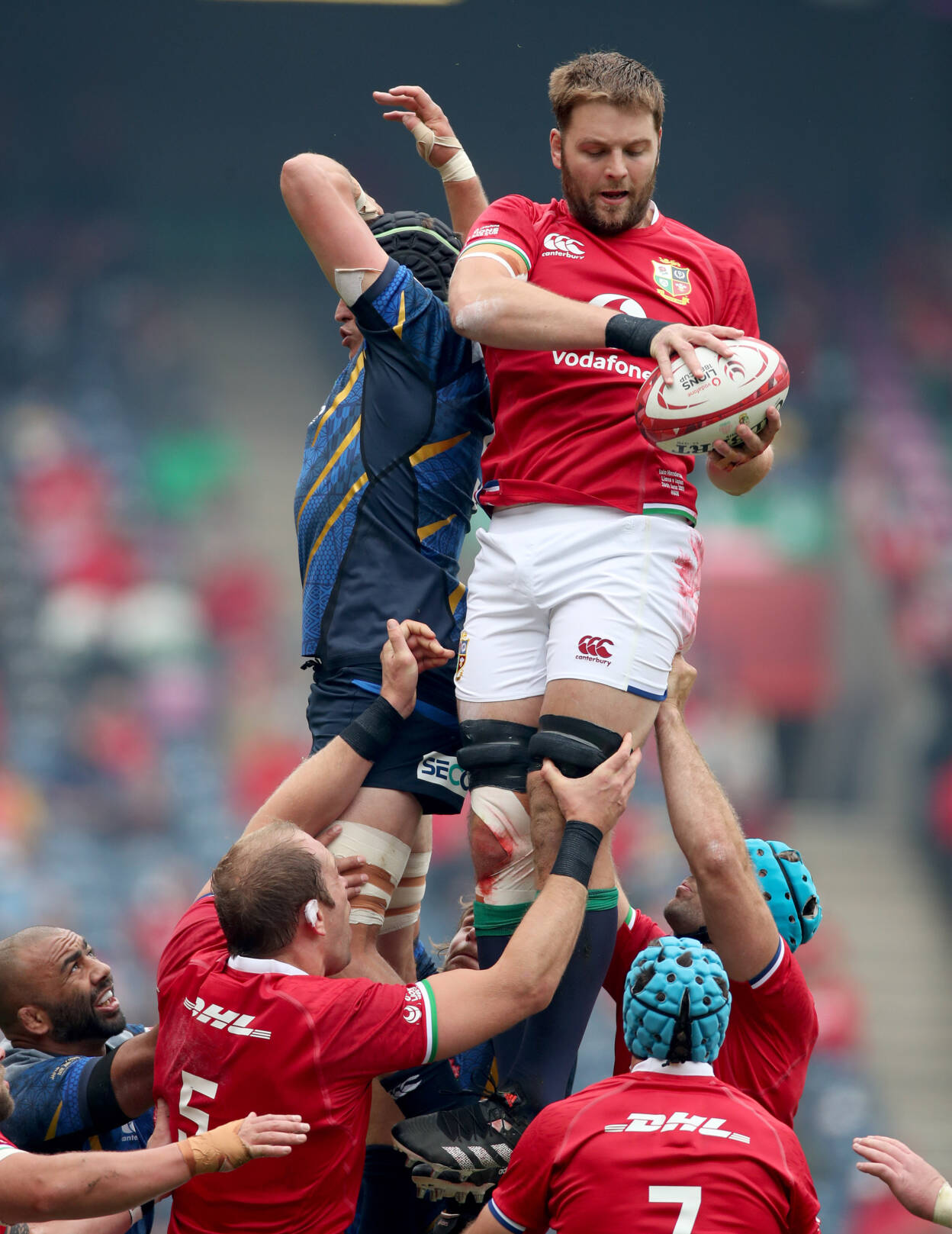 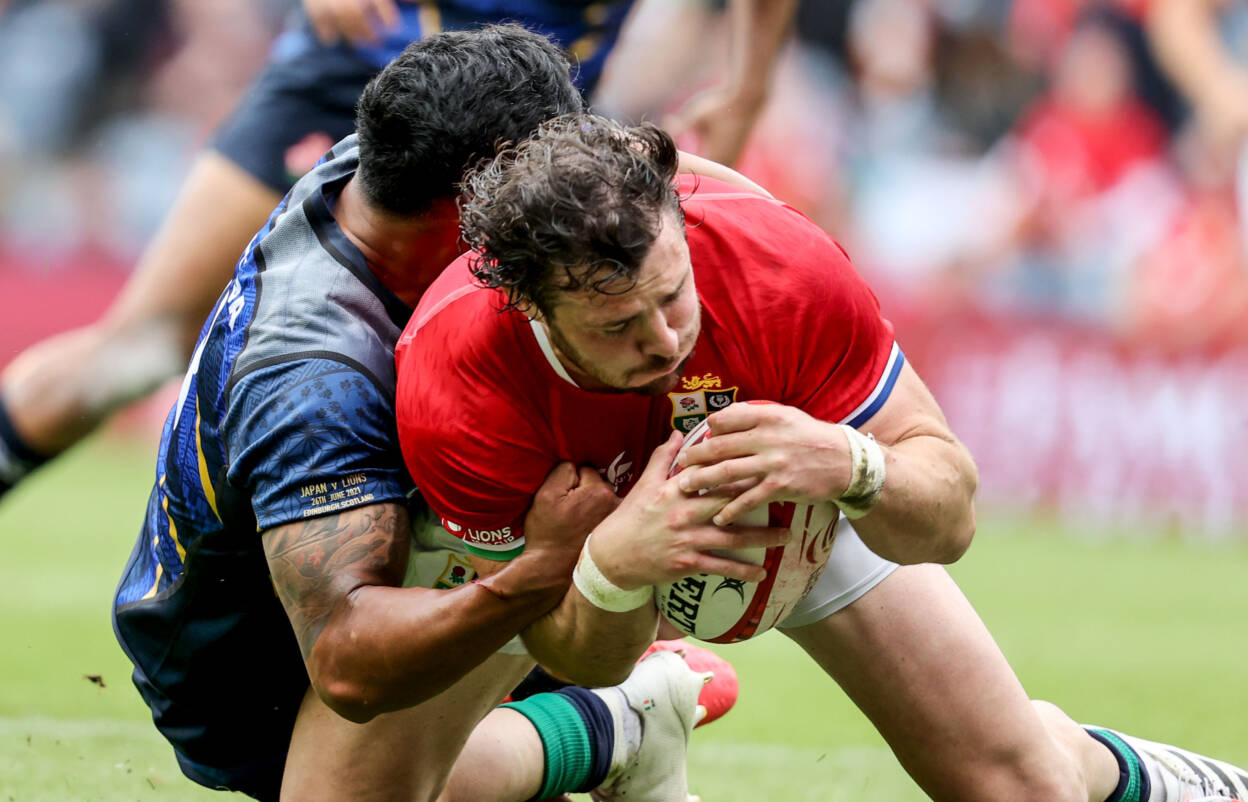 Trailing by 21 points, the Brave Blossoms leaked a scrum penalty as the Lions went in search of further scores. However, openside Lappies Labuschagné clamped down to win a relieving 35th-minute penalty at the breakdown.

The Lions soaked up some late Japanese pressure – Henshaw and Aki were both prominent in defence – and it was the latter’s well-earned turnover penalty that got the men in red back on the front foot, early in the second period.

Conan had a try ruled out for a prior knock-on by Liam Williams, before replacement Courtney Lawes, set up by Furlong’s barnstorming carry, had an effort chalked off for losing control of the ball before grounding it.

There was no disputing Beirne’s brilliant charge in under the posts, with the Kildare man showing impressive pace to score from outside the Japanese 22 via an inviting Biggar pass that took out two defenders. 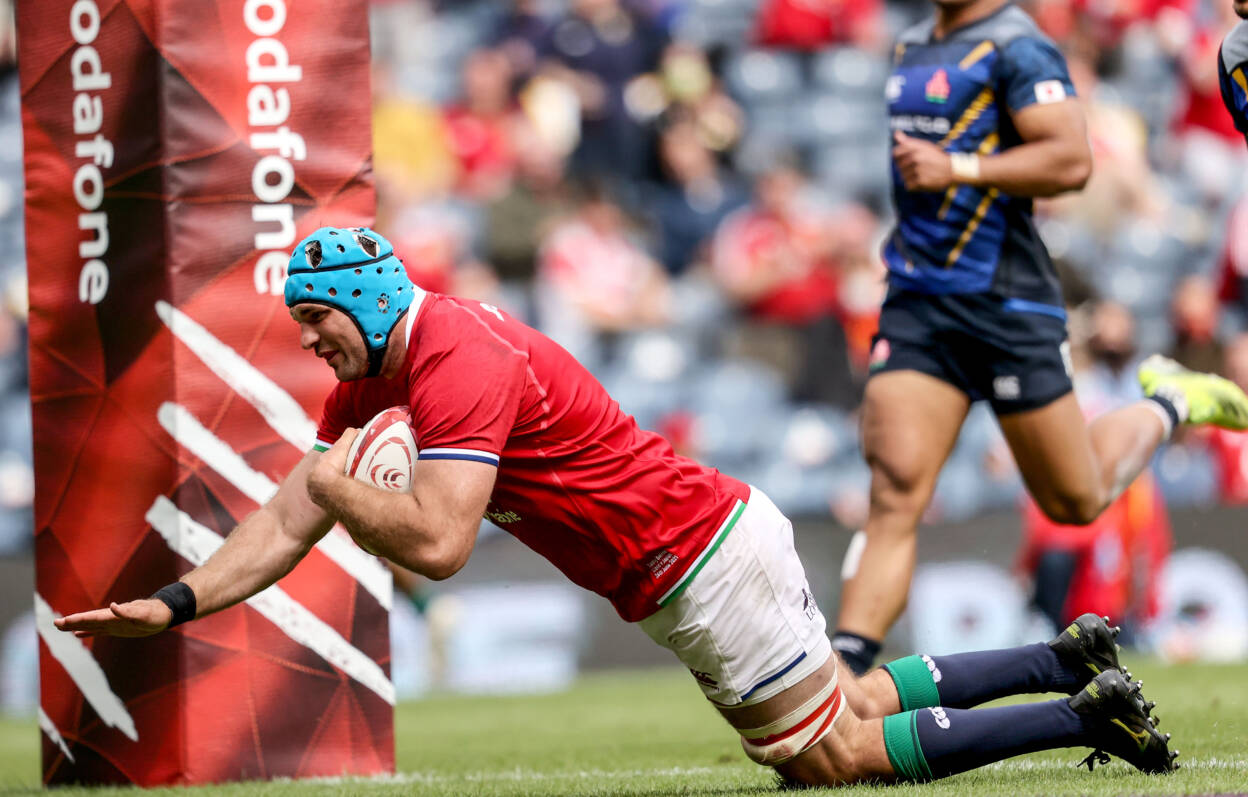 Biggar’s conversion preceded the first serious movement from the benches. Japan’s endeavour was finally rewarded in the 58th minute when a well-worked move from a lineout saw Himeno break a tackle from Taulupe Faletau and be driven over the line for Yu Tamura to convert.

Out-half Yamura was also successful with the second of two penalty attempts, closing the gap to 18 points with just over 10 minutes remaining.

Calf trouble meant Conan missed the closing stages – the Lions played on with seven forwards – and Japan dictated much of the play, replacement Tevita Tatafu and Matsushima showing their respective power and pace on breaks. 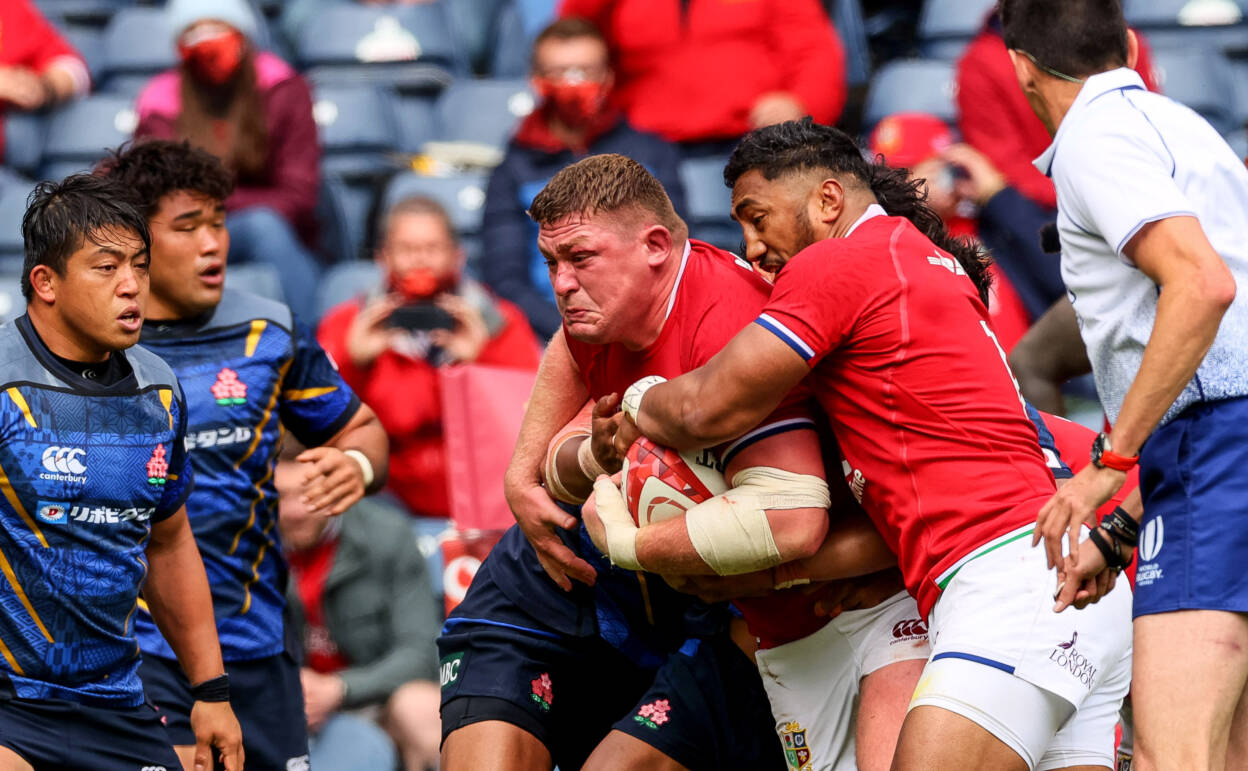 Although it was a solid defensive effort from the Lions, there were definite areas for improvements and Japan were able to get around them on occasion.

Himeno was denied a second try by a combined might of Beirne and Henderson, right on their own line, before replacement Anthony Watson did well to defend a dangerous cross-field kick.

Neither side could add to their tally late on, as Japan failed to capitalise on a promising run by Matsushima, and Watson could not connect with van der Merwe during a last-minute counter attack. 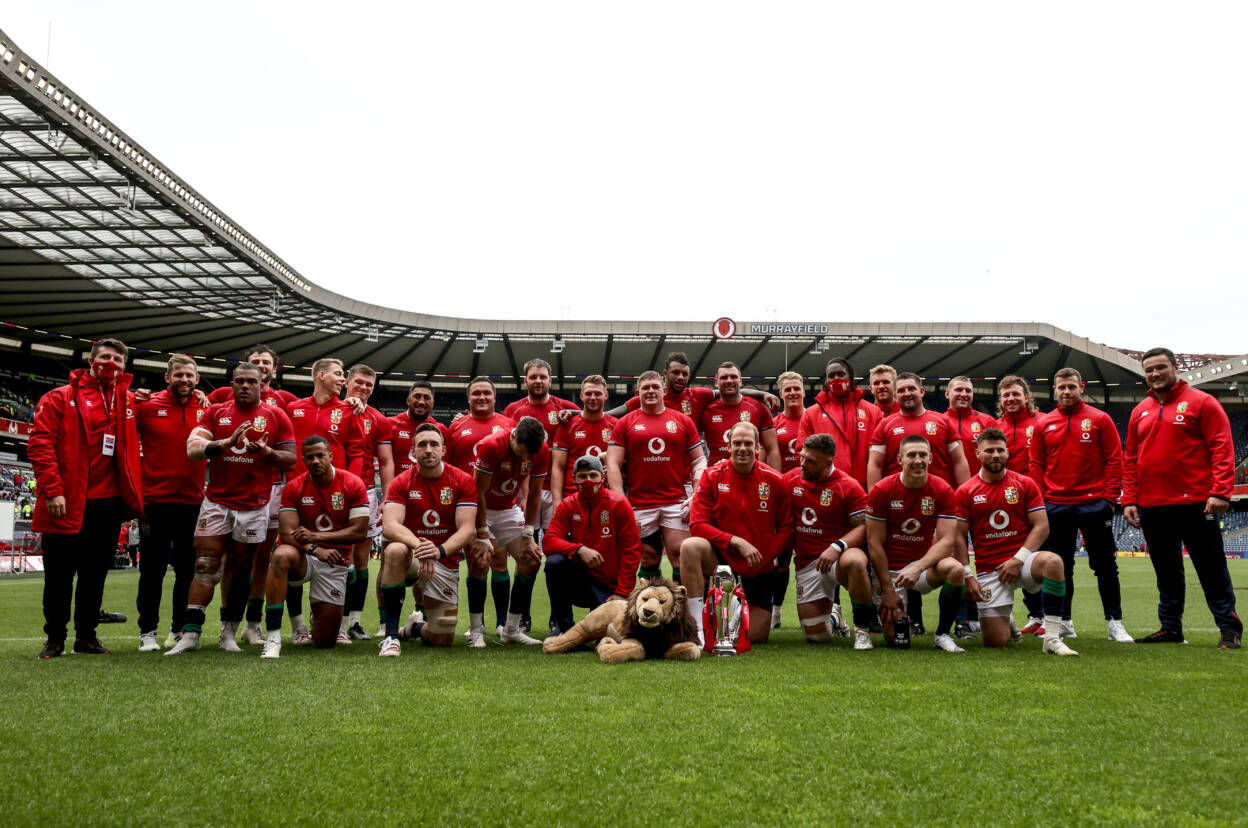