Continuing our series on Women In Rugby, this week we hear from Jennie Bagnall, Women’s Development Officer with Leinster Rugby. Jennie tells us about her time with Leinster and the changes she has seen.

In the twelve years since she first started working for Leinster Rugby as a Women’s Development Officer, Jennie Bagnall has witnessed a lot of changes.

None more so than in the participation rates throughout the eastern province – which were paltry when she first assumed her role in the winter of 2009, but have increased exponentially with each passing season.

“When I started, I had seven girls teams and seven women’s teams in the entire province and no mini girls,” she explained. “Nothing Under-12s separate for girls at all.

“At last count, I think we’re up to 70 girls teams aged between 13 and 18. 70 girls teams across the province and, last count, 24 mini teams. That would be a conservative estimate and then obviously you have women’s teams. The growth is absolutely huge. The majority of it coming in the last five years.”

Initially, it was tough going when it came to developing Women’s rugby within Leinster. Despite her best efforts, there was never going to be enough hours in the day to cater for the needs of all the clubs and schools.

As a consequence, Bagnall’s role in recent years has changed to that of Lead Women’s Development Officer with three other full-time employees on hand to share the workload.

The fact that Bagnall conducted this interview while on an evening journey from her home in Kildare to a club in Wexford tells you that it remains a busy job, but she is undoubtedly grateful for the assistance offered by the above trio.

“We’re still not there yet. I’m covering two regions. It used to be I was the only women’s officer in all 76 clubs and schools.

“I was very much driving that agenda. As the years went on, the other  Development staff roles have altered more to cover boys and girls rugby. Still essentially, you need somebody who, this is their job, this is their passion.

“Driving the women’s agenda all the time, pushing that to the forefront. September 2019, we got the additional funding for two more officers in Dublin (Muldoon and McKeown).

“Obviously the more people on the ground able to attend, visit clubs, build relationships and all that, then the stronger we’re going to be,” she acknowledged. 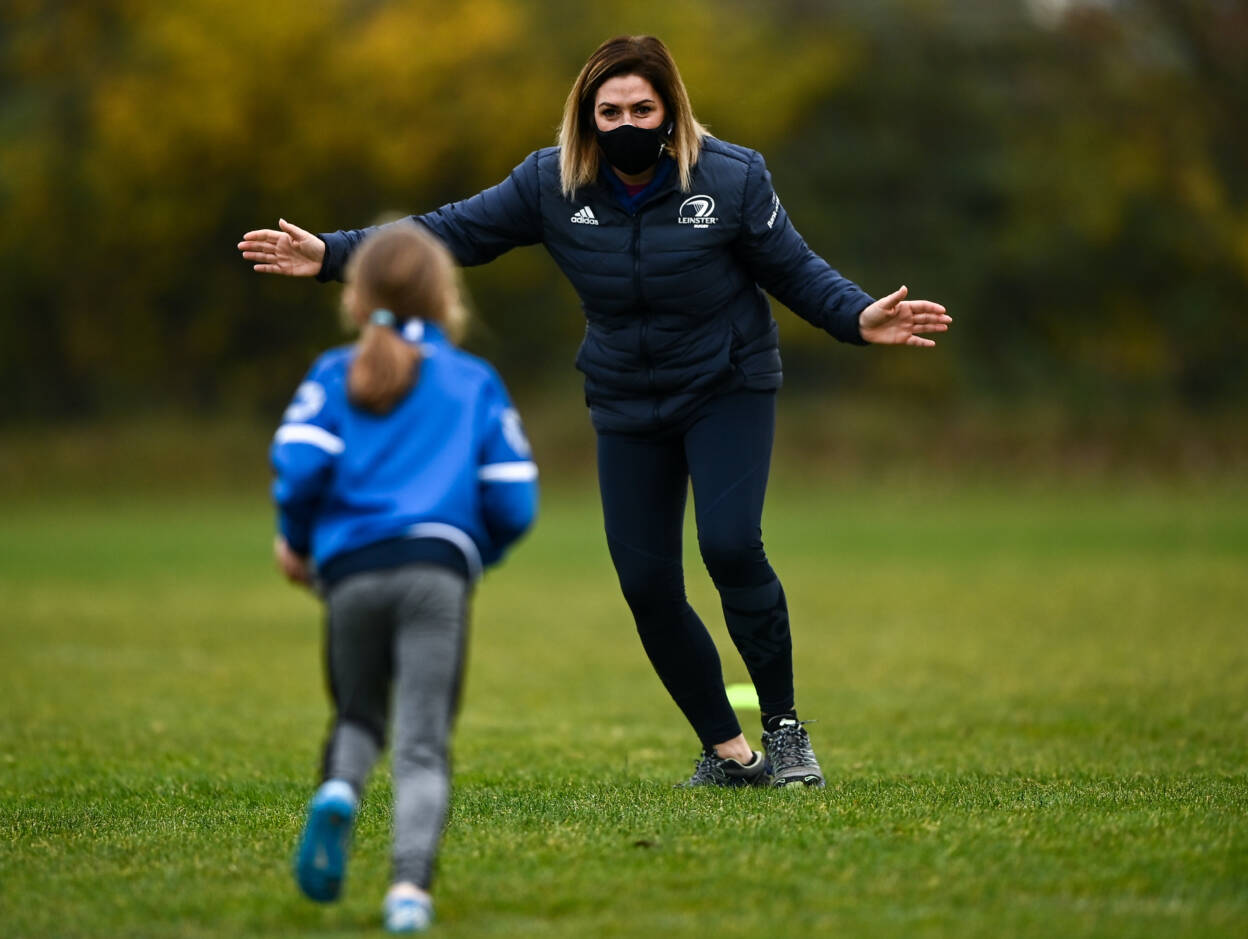 Jennie Bagnall during a Give it a Try  training session at MU Barnhall in Kildare. Photo by Harry Murphy/Sportsfile

Born and raised in England, Bagnall first caught the rugby bug when she was brought along by her father to the matches of her local side Coventry RFC. Netball was her main sporting passion as a child, before she tried out the oval ball game as a student of Hertfordshire University.

Whilst still in the UK, Bagnall met her future husband John, who is also employed by Leinster as a Coach and Player Development Officer (CPDO) for the North Midlands region. They subsequently relocated to Ireland and John became Maynooth University’s first Rugby Development Officer in 2005.

He played for MU Barnhall in the All-Ireland League during this period, but with no Women’s team in the Kildare club, Jennie was restricted to being a spectator on the sidelines.

However, she duly took on a background role within the club and this ultimately kick-started her journey back to the field of play.

“The head coach, threw the first aid kit to me and he asked me to, ‘go on, help with whatever was going on with the men’s game’. I was like, ‘okay’.

“I did that for a couple of weeks and then I was like, ‘hang on a minute, why am I doing this here when we could be playing our own team?’

“Me and all these other wives and girlfriends on the sideline. We started up our own team then. Myself and another lad were coaching it and I managed it. We set up that team in Barnhall and that was the first Women’s team that MU Barnhall ever had. I played with them for a while.

“We ran summer camps for them as well. I was always heavily involved in rugby and then the Leinster job came up. They had a change and the development officer job came up. I stopped playing really then.”

As part of her day-to-day responsibilities, Bagnall is always looking for innovative ways to progress the Women’s game within Leinster. In recent months, the province has launched two new Women’s rugby programmes – namely ‘Women’s Webinar Wednesday’ and ‘Tag4EveryMum’.

The former is aimed at the area of coaching youth girls, whereas the latter is a programme specifically designed to encourage mothers of young players to get involved in their child’s rugby club.

Although these initiatives are still in their infancy, Bagnall can see both of them having a long-term impact. For her, the more girls they can get to play rugby at a younger age, the better it will be for the game going forward. 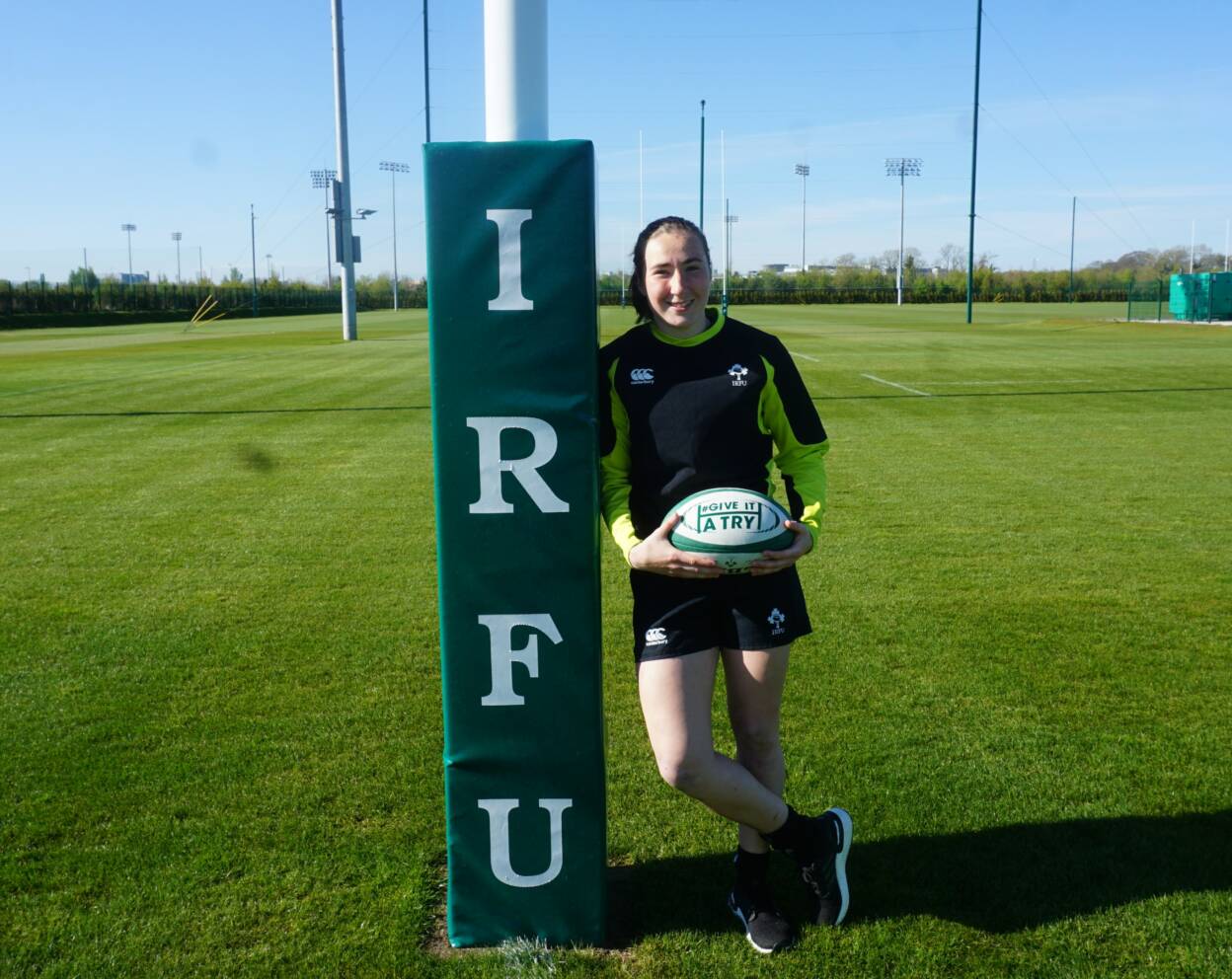 Ireland international Eve Higgins, who started playing rugby in MU Barnhall, at the launch of this year’s Canterbury Give It A Try programme.

“If something is inherent and you’ve been doing it since you were eight-years-old, there’s much less chance that you’re going to drop it, which is obviously a key. That teenage girl stage for us is a challenge.

“It’s very hard to get girls to start playing the game at that age. If we can get them playing younger, then obviously that’s incredibly exciting for us.

“What would I like it to look like in five years’ time? Lots and lots of players. Really high quality, sustainable structures. As many opportunities as we can for the girls to play as much high quality rugby as we can.

“More female coaches obviously. In 10 years’ time, I’d like to see (Ireland international) Eve Higgins coaching minis in a club or coaching a Leinster Under-18 team,” she added.

Amanda Greensmith: “Providing those opportunities for girls to fulfil whatever their ambition is. That’s our job.”

Emer O’Dowd: “We’ve seen an upward trend of new bodies coming into the clubs and trying the game for the first time. That also drove the volunteer base up as well”