Hannah O'Connor, pictured with Eimear Considine, was brought on as an early injury replacement against Italy on Saturday ©INPHO/Ryan Byrne

Back rower Hannah O’Connor admitted it was ‘a bit of blur’ when she replaced Ireland captain Ciara Griffin so early into Saturday’s place play-off win over Italy at Energia Park.

There were just 13 minutes on the clock when Griffin, having tackled her opposite number Elisa Giordano, was removed from the field of play for a head injury assessment.

The switch was then made permanent, meaning O’Connor spent the rest of the contest at the base of the scrum alongside Dorothy Wall and Brittany Hogan, who was making her first Test start.

“You’re on the bench and you know that you could be called upon at any time. Your job as that impact sub is to be ready and be ready to slot in as best you can, as quick as you can,” O’Connor explained in a post-match interview.

“Make sure things keep rolling the same way, so you can bring your impact. It was obviously a surprise to come on as early as it was, but it happened in a blur and you’ve no time to process it. You’re straight into it, which is a plus as well.”

Over the past two Six Nations campaigns, a number of players have featured in the Ireland back row, and squad depth is seemingly increasing for the crunch Rugby World Cup qualifiers later in the year.

Embracing being part of such a competitive group, Loughrea native O’Connor said: “We’ve an incredibly competitive squad at the moment. The competition for places right through 1 to 15 is fierce.

“That’s what you want and our job as bench replacements, or anybody else between that 1 to 40, is to come in and do a job.

“That’s what it is, to keep pushing each other. We’re trying to be as adaptable as possible for those changes, because you never know what can happen in a rugby game.” 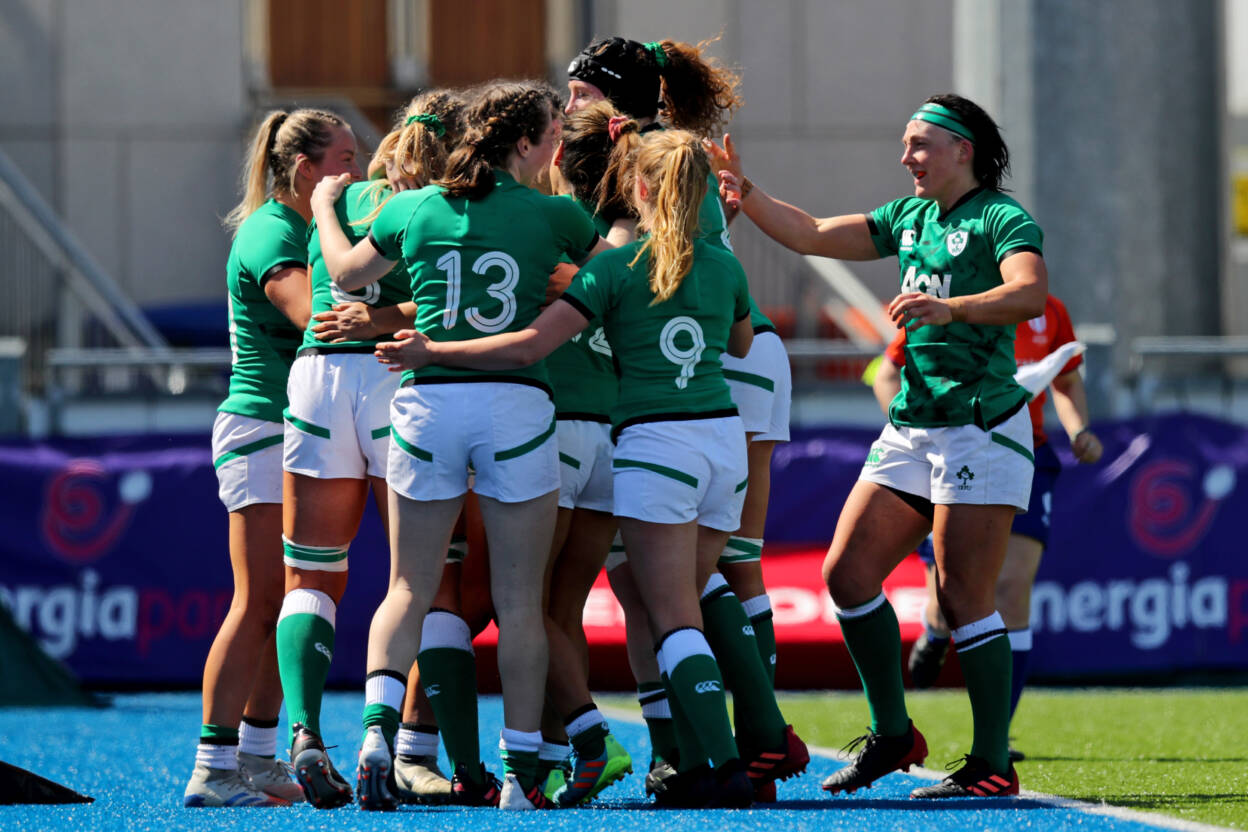 Ireland had targeted two wins from three in advance of the restructured Women’s Six Nations and that objective was achieved as a result of Saturday’s four-try success.

Still, O’Connor acknowledges the squad are not satisfied with their lot – especially with how they fared against France in the Pool B decider – and are constantly looking for ways to improve their performances.

We’ll always be critical. We’re a squad that’s young and enthusiastic – the passion is there and the drive we have to always improve. On paper it’s two wins from three and that’s fantastic.

“The learning that we’ll take from every game, whether it’s a win or not, even today, will be massive for us. We just want game-time, we just want to play. Because there’s nothing like match repetition and match reps to get you up to speed.

“It will really stand to us. A big 18 months ahead and it’s definitely good to build on two wins out of three. We’ll obviously review and preview going forward, build from that then.”

Winning her first cap against Wales at UCD in November 2019, O’Connor had to wait over 11 months for her next opportunity in the Ireland jersey.

That came against Italy in last October’s rearranged game at Energia Park, which was a Six Nations debut for the Blackrock and Leinster forward.

She has been a regular in the Ireland camp over the past six months and believes her game is continuing to develop at international level.

“You obviously are looking back on things and you hope to improve all the time, but I do feel I’ve progressed a good bit since then,” she acknowledged.

“You look back on some of the errors you make and you might cringe a bit, but definitely progressing all the time.

“The level of competition and intent within training sessions is brilliant, but the match rep over the last three games has been brilliant. It will stand to me now going forward as well. I’ve been delighted.”

On her international bow, O’Connor was introduced in place of second row Judy Bobbett. She has deputised for blindside and openside flankers as well, but Saturday saw her featuring in the number 8 position that she usually occupies for club and province.

Although this is where O’Connor feels most at home, she unsurprisingly is happy to fill any role she is asked to.

“You try to be as versatile as possible, but 8 probably would be the main one. The usual, anyone would happily step up and do whatever job if it meant you were getting in the green jersey. You’d do whatever was needed.” 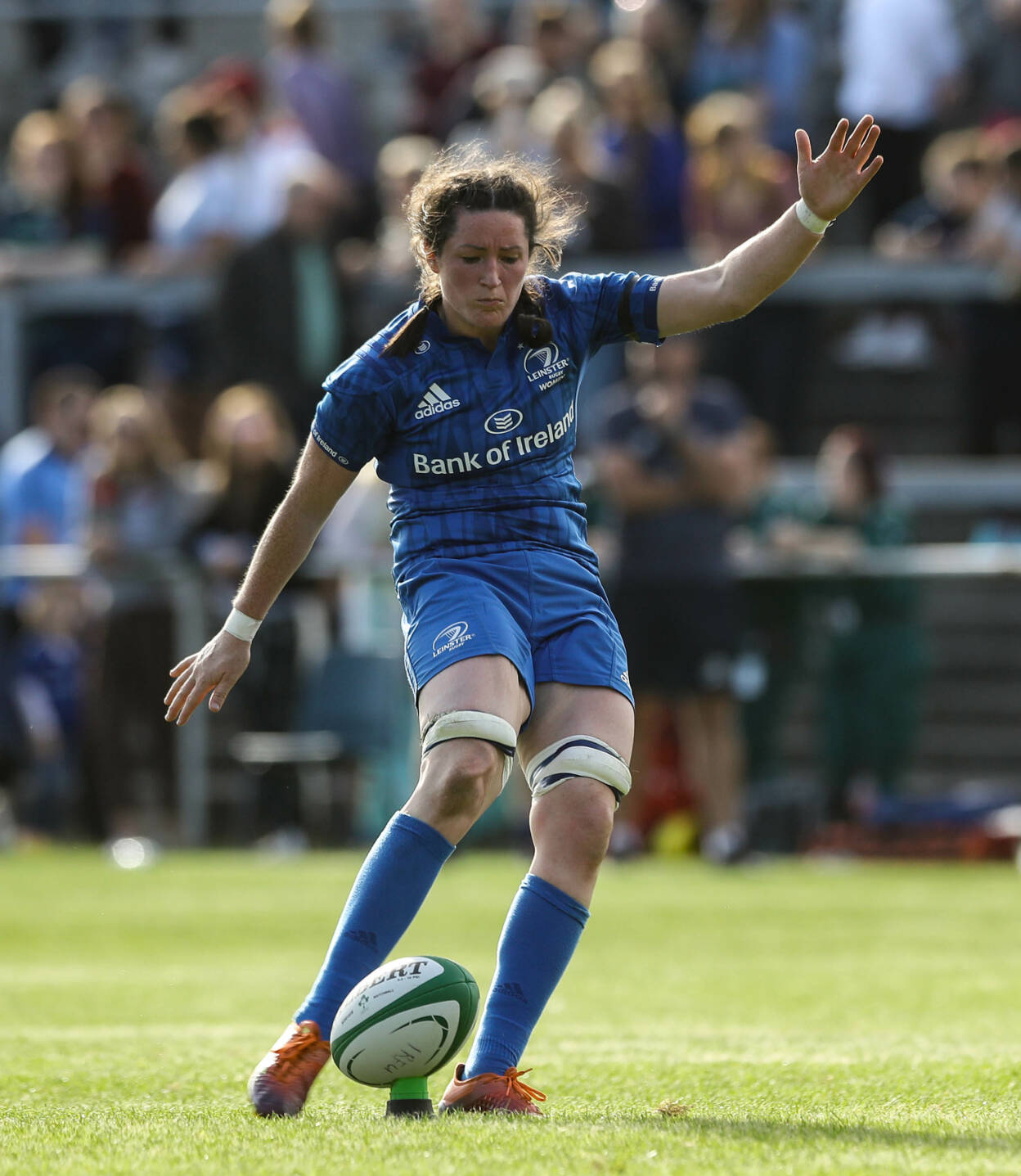 As head coach Adam Griggs earmarked before the start of the 2021 Championship, the talented O’Connor is also capable of stepping up to the kicking tee if needed.

In the newly-restructured Interprovincial Championship of 2019, she emerged as the competition’s top scorer. Speaking about her place-kicking ability, she added:

It’s in the locker, but I definitely wouldn’t be taking the kicks off them (Stacey Flood and Hannah Tyrrell) in games like today!

You’d fancy it at times, but it’s definitely not something I’d be taking off them. They’re flying it, the girls are. It’s handy to have left-footed options in the team as well, which is brilliant.”