They may have scored four tries, but it was the defensive effort that Ireland Women’s head coach Adam Griggs found most pleasing about his side’s performance against Italy.

With Dorothy Wall, Amee-Leigh Murphy Crowe (2) and Cliodhna Moloney all touching down, Ireland secured a 25-5 victory and a third place finish in the Women’s Six Nations.

While the Italians were certainly not lacking endeavour, it was no until the 69th minute that the visitors finally opened their account with a close-range try from hooker Melissa Bettoni.

The Irish defence had successfully kept the Azzurre at bay up to that point, with replacement prop Leah Lyons superbly holding up Bettoni from her previous surge towards the line.

Speaking during his post-match press conference, Griggs said: “I think that’s the biggest positive we’ll take from it, our defensive effort. Italy will never stop coming at you, they’re a scrappy team.

“We had to really dig deep and scrap for every inch around that defensive line as well. I think that’s one of the huge positives, that we were able to keep them out.

“Even when we look at the game against Wales, at similar times we were put under pressure and our defence held strong.

“I think over the last three games, while week two was obviously disappointing, we can take some positives from our defensive efforts. The way we scrambled and were able to keep teams really working hard to get across our line.”

Ireland suffered an early blow when captain Ciara Griffin was withdrawn in the 13th minute for a head Injury assessment. The Kerry woman did not return to the field, which meant Hannah O’Connor played more than an hour in the number 8 position.

At the same time as acknowledging how much of a loss Griffin was, Griggs commended O’Connor for the way she stepped up to the mark in the skipper’s absence.

It’s always tough losing your captain. Ciara brings that work-rate to us and does most of the unseen work in that back row. To lose her was disappointing, but at the same time I thought Hannah O’Connor was brilliant when she came on.

“I think she steadied the ship for us. While she’s not as experienced at Test level, she’s played rugby for a long time now. She understands our systems.

“I think she made a really good go of it when she got that extra game-time. Really pleased for her, she’s been coming off the bench the last couple of games and added impact.

“To get a longer run, I thought it was really good for her and it will be good for her development going forward.”

Against Italy at the same venue six months ago, O’Connor stepped up for her Six Nations debut as a final quarter replacement. With 16 minutes remaining in yesterday’s clash, Grace Moore made her international bow, taking over from Aoife McDermott in the second row. 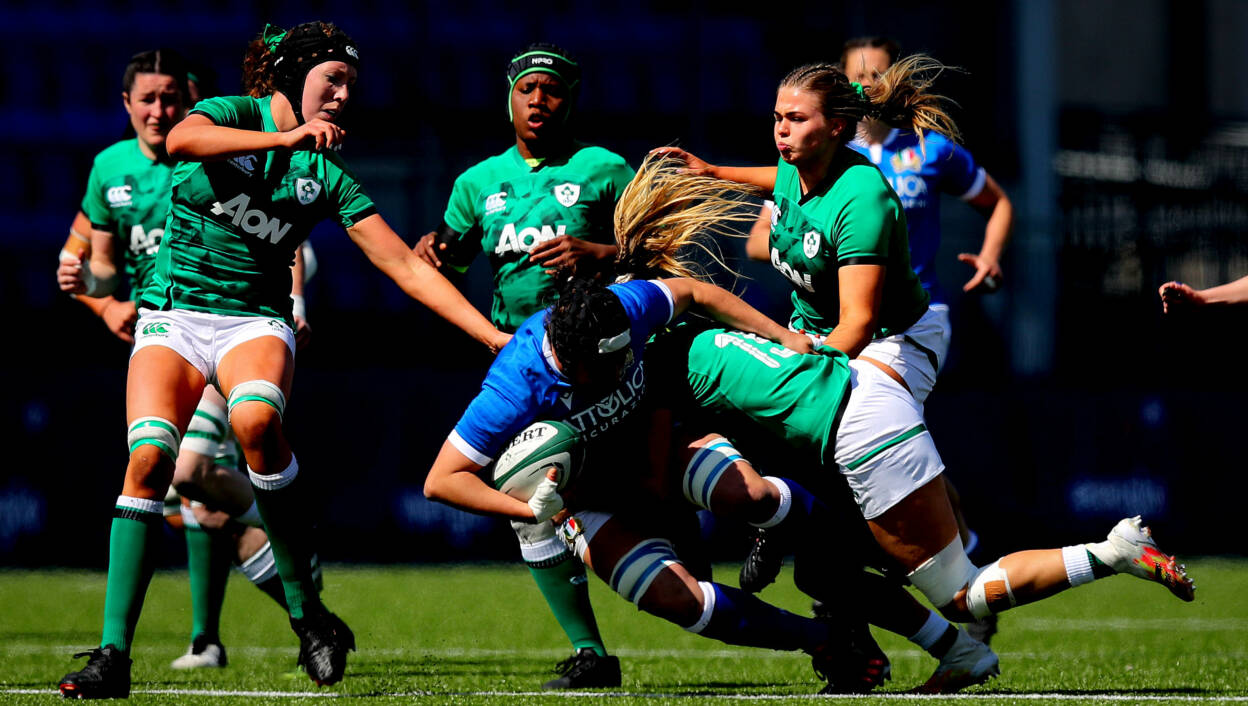 Griggs was delighted with how the IQ Rugby recruit handled being thrown in at the deep end – Italy were on top of possession at the time of her introduction – and feels there is more to come from Moore in the future.

“Grace has been training with us and she earned her right to get into the squad. We felt it was a good time for her and I think you saw in one of her defensive efforts that it’s big collisions with her.

“She flies off the line, she’s very physical. We thought we needed that at that time. As soon as she came on, she did that.

“It’s really nice to see players that you have faith in and what you’ve seen in training, bring it into a Test match arena.

“It was really good for her and again moving forward with that bit of game-time, I’m sure it will give her the drive to push on (in her international career).”

Even though he accepts the performance of the team was ‘a little scrappy’, there were a number of individual performances that gave Griggs cause for optimism ahead of the Rugby World Cup qualifiers later in the year. 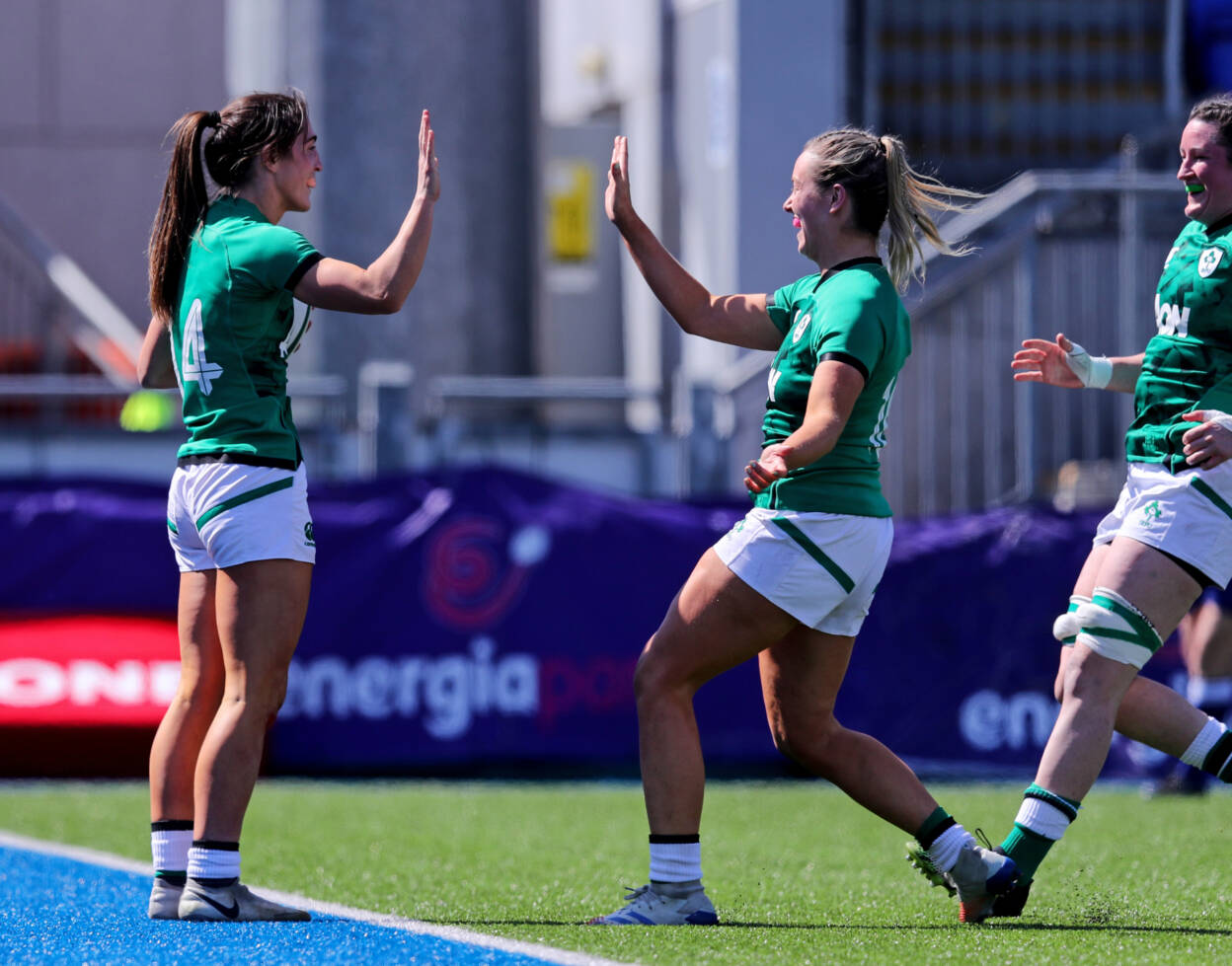 Player-of-the-match Stacey Flood, the aforementioned Murphy Crowe and Brittany Hogan were all making their first starts in a 15s international and did their future prospects no harm with some sharp displays, Griggs noted:

I thought Stacey managed the game really well, certainly in that first half when we had a bit of a wind behind us. She put us in the right areas of the field and we were really happy with that.

“We probably just let ourselves down with some execution once we got into those areas. We felt that she had a really strong game and kept the tempo up, which we were delighted with.

“I thought Brittany did a great job as well. She brought her physicality, she tested them at the breakdown and we were really pleased with that.

“We know what Amee-Leigh can bring and it was great to see her get some ball in space. We had a nice set-piece move that we’d worked on and it was really good to see her back herself and score those couple of tries for us.”