Despite the clear disappointment of losing out to France, Ireland captain Ciara Griffin was already switching her focus to the next challenge within minutes of the final whistle.

As a result of their 56-15 Pool B defeat to the French at Energia Park, Adam Griggs’ side will now face Italy in next Saturday’s 3rd-4th place play-off in Parma (kick-off 1pm local time/12pm Irish time).

Having overcome Wales with considerable aplomb in their Six Nations opener, Griffin wants the girls in green to end the shortened 2021 Championship on a high against the Azzurre.

“Obviously it’s not the happiest dressing room, but in terms of us and what we can do, we’ve to focus on what we can improve,” admitted the Ireland skipper, speaking soon after the pool decider in Donnybrook.

“What we can fix, what we can change and just focusing on us. That’s the main thing really, what we can bounce back with now. We’ve a big week this week leading up again and you can’t drop your head now.

“Because it’s not finished yet. We’ve another cup final next weekend and we’ve to get ready for that. We know the work we’ve put in, all the work into that jersey. Things didn’t go our way today and we made errors.

“That’s what you learn from against world class teams. We learned about those areas and those areas now can be picked up and improved for next weekend. That will be one area covered.” 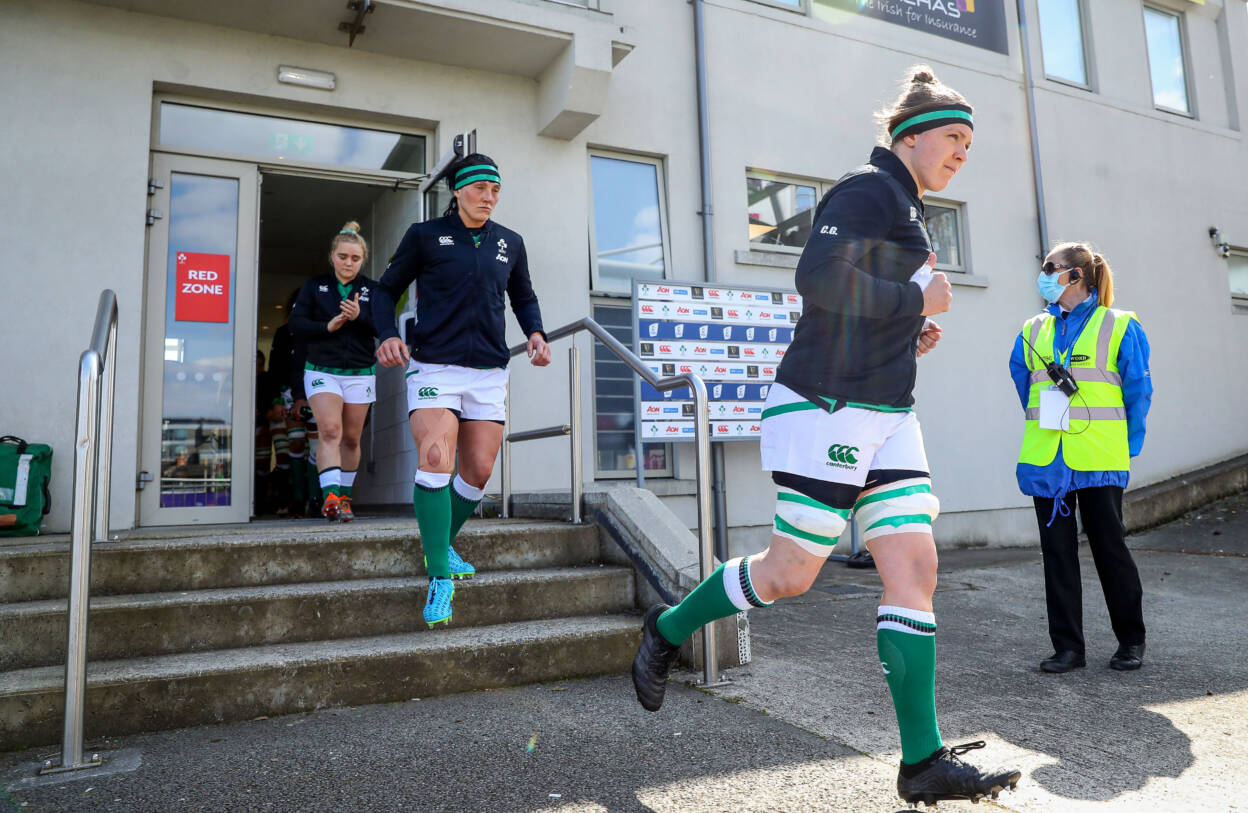 Even though eight-try France ruled the roost for the majority of the contest, Griffin was encouraged by the way her team-mates continued to fight in the face of extreme adversity.

As they look to build towards a series of Rugby World Cup qualifiers later in the year, she saw some good plus points that she hopes can be brought forward into those forthcoming Tests.

Every woman out there, from 1 to 23, we kept going to the 80-something minute. No one dropped their head. The scoreboard, you couldn’t change it after a while unfortunately.

“We kept focusing on us and going forward, just protecting our line. Kept going and kept going for that second try. I’ll take a lot from that for this group in terms of that mental toughness.

That’s going to help us leading into this week, that mental resilience. I think a big thing was our physicality and our aggression. We didn’t sit back and we kept going.

“Work-rate, I thought people kept working. Our lungs and our legs kept going, we were able to go to the end. I thought set piece, in terms of lineout, we got two tries from driving mauls.

“That’s something we wanted to work on from last week. Our maul set-up and our maul advance. Two tries from a maul, I’ll take that.”

Nonetheless, the Kerry woman acknowledged that France more than lived up to their current world ranking of fourth – as Griggs’ charges had anticipated they would. It made for a considerable step up from the Welsh game.

“We knew from the word go it was going to be a different animal here with France. You see the way they play. They’re quite expansive, they’re also physical. Quite a skilful team.

“If we sharpened up a few areas and didn’t get away penalties and give them easy yards…if we nullify and eliminate that, we’re in a good place going forward.

“The French were clinical. They had their work done. You could see they came out firing. They wanted to play rugby and prove a point as well. Again, we’ve to focus on us and fix our errors. There were a few errors out there that we will work on.” 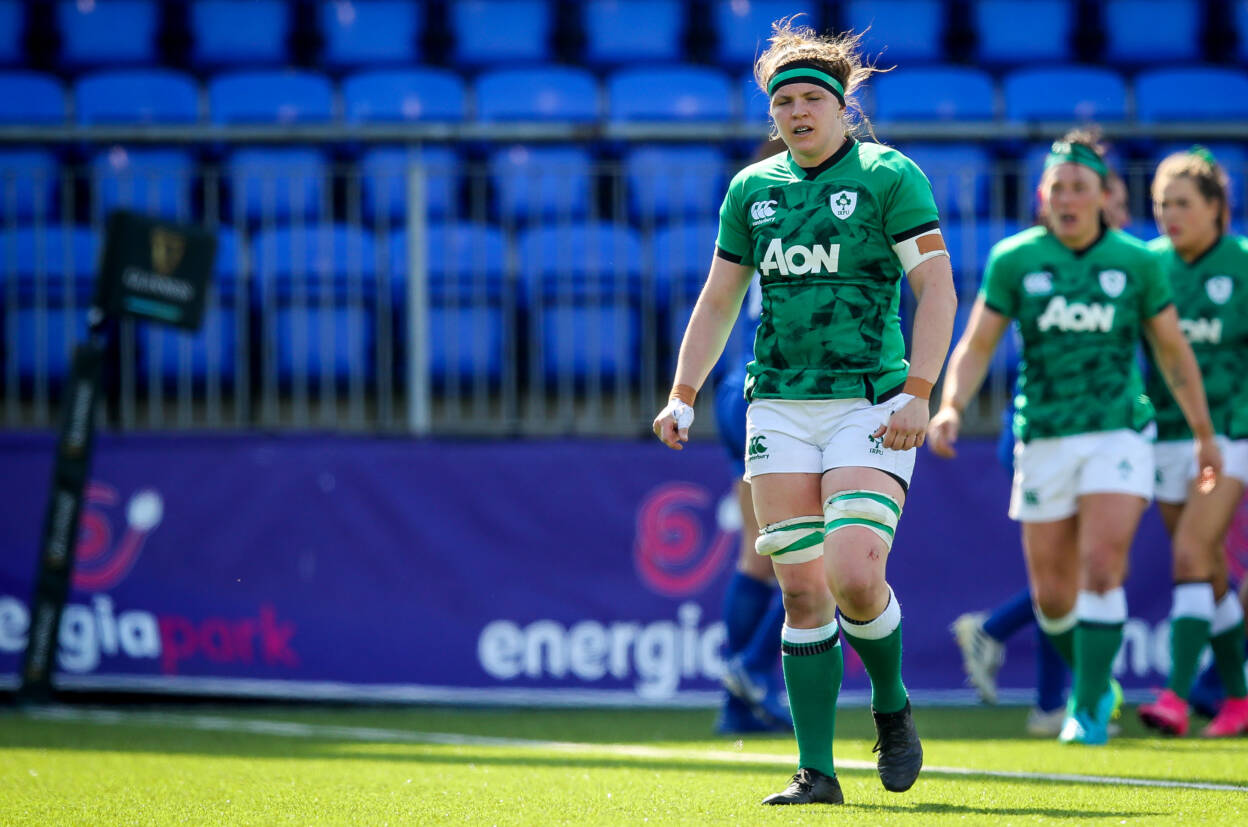 Rather than look at what can be learned from a side of France’s calibre, Griffin insists they need to concentrate on their game first and foremost. This will be the main aim over the next few days, especially with Italy coming off the back of an encouraging 41-20 victory over Scotland.

“We can learn by focusing on us. Focusing on our process, what we can control. Not playing into their hands at times. We’ll do our revision, we’ll do our footage review and our analysis,” added the 27-year-old back rower.

A big thing for us is focusing on our tempo and our control. Just controlling the ball the way we want to control it and not play into hands like that.

“We always have a game-plan to use our backs, to use everyone like that, but you’ve to play what’s in front of you at times. If France gives you a different picture that you can’t go wide straight away, we have to adapt on the fly there.

“Punch, punch and then try and play it. Sometimes we couldn’t get it to the width in terms of that French defence and that pressure. It’s up to us then to adapt. Realise that and go to plan B, which we’ll work on this week.”